Wrapping glass is something everyone complains about but there's just no way around it (unless you can find someone else to do it for you and good luck with that).   Surrounding the piece evenly with foil can be hard enough and once that's done most students stop thinking about cause and effect and just hurriedly fold the edges over, press it down quickly and call it wrapped.  But if your wrapping (which can also be called foiling) is sloppy your solder will be also.  There are a lot of steps involved but once you become proficient at it you can go through pieces quickly and efficiently as most of our students say that I do.  So here's my secret.

This first step is simple but essential to good foiling.  Make sure the corners on your glass pieces aren't pointed and sharp.  Just hit them for a half second on the grinder with minimal force.  You should never have a sharp corner because it will rip your foil in half if you are pulling it as taut as you should be.  The example below shows just how minute the difference can be.  The top corners are razor sharp while the bottom ones are still pointed but not razor sharp.  The difference is almost negligible when you look at the piece but when you wrap those corners in foil there will be a HUGE difference. 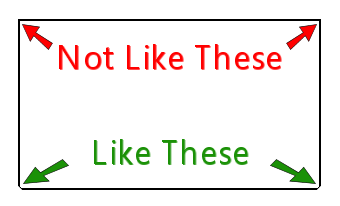 While you apply your foil you should be pulling it tightly across the piece of glass.   The last thing you want is slack in your foil before you press it down.  If you have razor sharp corners the foil will rip when you pull it around the corner.  Once the piece is completely surrounded you need to run your finger around the edge of the entire piece making sure that the foil is adhered nice and firmly to the glass.

Next comes the step that everyone wants to gloss over.  We don't want any of the sticky side  of the foil to face upward or the solder won't stick to it.  If you accidentally press some of the foil in the wrong direction just use you fingernail or a knife or razor blade to lift it back up.  Slowly start in the middle of one edge  and fold the foil over onto the top and bottom sides of the glass.  When you reach the corner use your fingernail to tuck the foil as close as possibly over the glass on both the top and bottom.  I never have very long fingernails but I can always do this easily.  Next move to the other edge of the glass that shares the same corner and push it down on top of the previously flattened section of foil.  Repeat this process until you've pressed all of your foil down.  Actually, it's very much like wrapping a Christmas present.    You can see what I mean in the animation below on the topmost corner.  This may sound like a lot of extra work per piece but it can be done easily and quickly without a second thought if you simply practice doing it on every piece.  Remember that the neatness of you foiling determines the smoothness of your lead lines.

And lastly, don't forget to press the top and bottom edges down firmly before calling the piece wrapped.  I don't recommend using a pencil because the paint on them causes its own set of problems.  I love using a plastic pen but some people like to use wooden clothes pins or the handle ends of plastic forks, spoons or knives.  There are even wooden and plastic FIDs sold specifically for pressing down your foil.  Whatever you chose, make sure that the angle that you hold the tool is parallel to the edge of the glass or the foil will not be flattened firmly.    This is especially true of bevels due to their angled edges.  And if you want to see a demonstration just ask me.  It only takes a second to show you the correct way to foil your glass.

Okay then, lets start off with our only completed window this week which is Janet's Tree.  What I like about this fact is that Janet gets a big spotlight on her window which is truly a work of art.  From the cutting to the soldering, Janet made this look easy.  And if you could see this in person you'd get to see how beautifully the bevels sparkle.  This window is a result of perfect choices all around.  Janet says that she'll let us see a picture of this when its installed.  It's going to look GREAT! 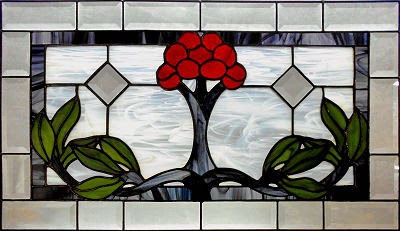 Rowena  made these two Fleur De Lis suncatchers while she was at home and brought them in to get my seal of approval before she added hooks and colored them.  And I give these 2 thumbs up!  Her beading of the lead around the edges required no touching up at all an the Fleur De Lis' themselves are nice and symmetrical.   That's quality work. 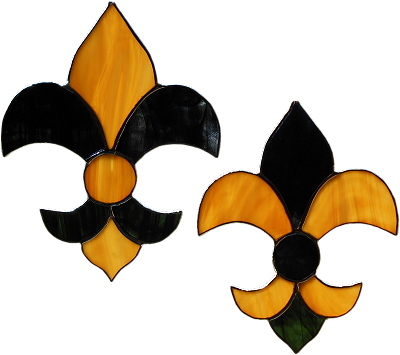 Ann has two of her Fleur De Lis Initial Windows all ready for borders.  she came in and got to work cutting out her backgrounds and left with only four pieces left to grind on the last window.  She'll be using brown glass for the borders and we'll see those applied next week.

Paula's FDL looks absolutely amazing.  It features 3 quarter inch borders surrounding a black Fleur De Lis, which makes this one tedious project.  Next Paula will insert this into a silhouette of the state of Louisiana.  I cant wait to see how this all turns out but I know for certain it will be impeccable. 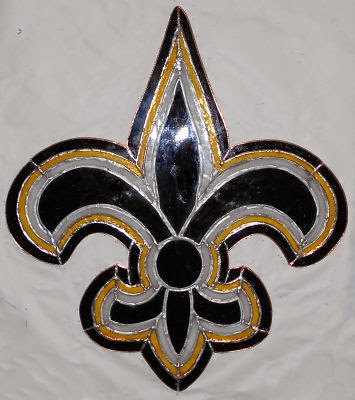 Carol has her Detroit Tiger ready for it's final border.  She accomplished a lot while she was at home but she got slightly stumped while trying to fit the largest piece of the background glass.  Once we got that under control the rest just fell into place.  Carol was going to make a blue border with white corners but in the end decided that a thin inner white border followed with the deep blue she used for the lion would look best because it will match the lion perfectly.

And Janet loved this Santa Claus face when she saw it online but now that she`s cutting out the small facial features (the eyes and the mouth) she hates him so much that shes sticking his face full of pins like a voodoo doll.  But now the hard part seems to be behind her now and the rest should go easily from hereon out.  Just remember that faces are always a troublesome to do in stained glass. Cindy's lamp is SOOOOOO close to being finished.  If it weren't for two breaks she'd have her lamp in her home already.  I heard the cracks happen and think that it was the way the lamp was positioned on the table with pressure landing on the pieces being soldered, but there wasn't much that could be done about that.  No matter, the pieces have been repaired and Cindy will be coloring this when she comes back in. 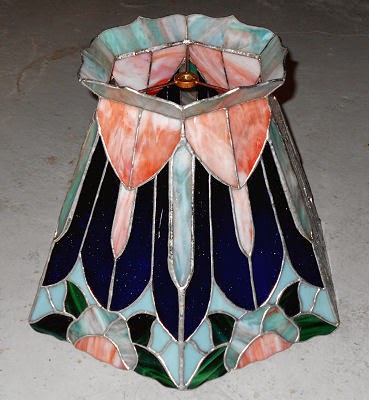 Linda L worked on her eight heart mirrors getting them tacked and then cutting the mirror inserts.  they're ready to be wrapped and then soldered when Linda comes back in. (I took the picture outside so you get to see the sky reflected in all of the mirrors rather than our ugly ceiling!)

Jeannette's shrimp boat is ready for solder. Now that the sky pieces have been wrapped and tacked you can clearly see the rigging on the boat and how the sky flows seamlessly behind all of the detail.  This window is a perfect example of how working outside the normal methods can make a window look even better. 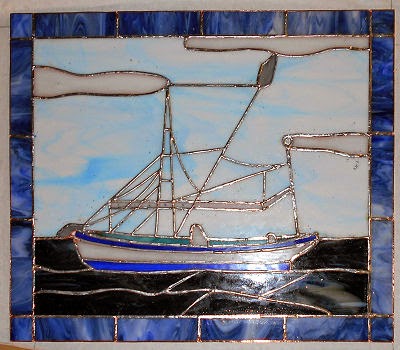 Rowena has the bottom LSU portion of her Tiger Eye/LSU Window all tacked together so now she's working on the tiger face itself.   Since both sections need to be EXACTLY the same size we've pulled the LSU up on the pattern so she can use it as a straight edge for the bottom of the tiger eye section.  This will also allow her to be sure that the width on both sections are identical. This is already looking great! 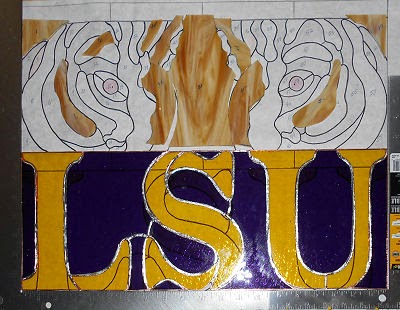 Jeanne's Stylized Cross window is now ready for solder after getting its last border attached this week.  Jeanne was going to take it home and solder it there but decided to work on two Fleur De Lis suncatchers instead, which are much easier to transport.

Lynn resumed working on her 'G" Initial Window and discovered a slight  problem with a few of her pieces.  She had used 2 different pieces of glass for for the dark amber section believing that they were from the same sheet, but they weren't.  Once they were sitting on top of the white pattern paper the difference in the color was plainly evident.  Luckily the color she wanted was the one that had the most pieces cut out of.  After a quick change she resumed cutting and grinding new pieces. 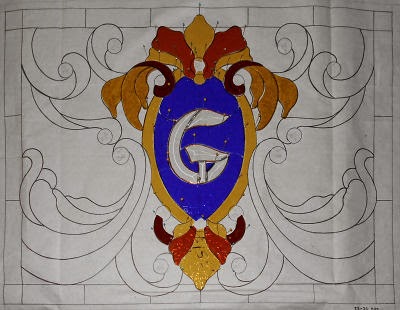 Shelly brought in the pieces she wrapped at home and then began tacking together her Mermaids Window.  Once that was done she set upon filling in the missing pieces that make up the water and tacked them into place as well.  Now that it's all tacked together and complete she'll add a border and then start the final soldering process.

Mary Grace picked out two borders for her latest Bird Of Paradise Window which she tacked together this week.  I'm going to give her a shout out for doing such a great job foiling this project-- her corners are all perfect and the foil itself is consistently even.  And as we all know by now, that means that her lead lines will be even as well.   She'll have her borders attached next week and then move on to soldering.

Myrt's first transom is officially wrapped , tacked and even completely soldered.  She'll color this black when she comes back in and then resume working on her second copy of this particular window.   Once that's done she'll be ready for the third, wider and more complex center piece. 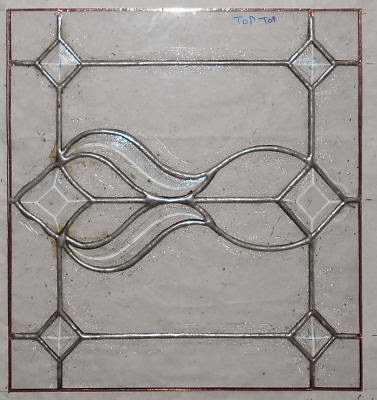 Now Brenda works fast so it shouldn't be any surprise to discover that her red B Initial Window is just about complete.  Just like last week, her window was finished with just seconds to spare in class.  Next week she plans on adding hooks, coloring it and then begin to work on something else. 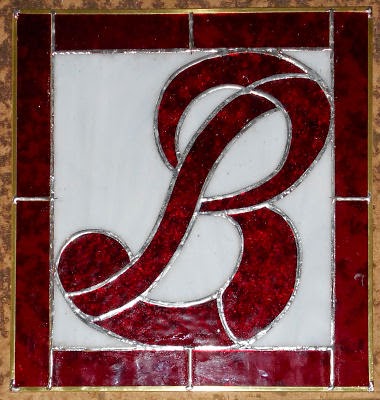 Susan has decided to work on an LSU Tiger Window but wasn't thrilled with how the LSU was mixed in with the Tiger's stripes.  She redesigned the letters during class, traced it all out and is ready to start cutting glass.

And then we'll end this up with Martha who got her Iris and Dragonfly pattern traced out.  She's separated all the pattern pieces which means that she'll be cutting glass when she comes back in. 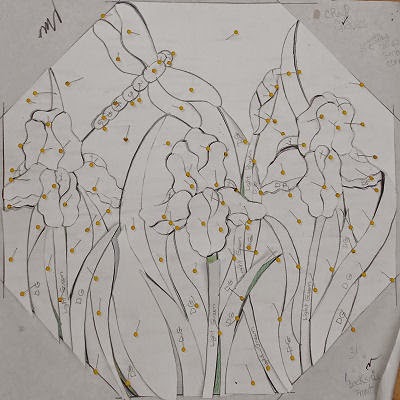 And that about wraps things up this week.  Come back next week when I suspect we'll have a slew of window ready to be unveiled!