This week we're going to start off with a quick and easy tip that needs to be mentioned.  Always work on your windows with the widest length running from left to right.  This may situate the window sideways to you but that's fine.  Many students think that the window needs to 'face them' while they are working on it making the student stretch across the table to reach far sections that would be closer if they'd just turn their window a quarter of a turn.  And never be afraid to reposition your window while you're working on it.  My windows spin around dozens of times especially when I'm soldering.


Okay, so Myrt's Sunflower Window is turning out to be popular among the other students AND with one of the teachers!  Russ is thinking that this might be a great fusing project to do with frit.  All I know is that Myrt works at a steady pace and knocks out one perfect window after another.  She's got  lot more planned and will begin working on her some clear beveled transom windows when she comes back in. 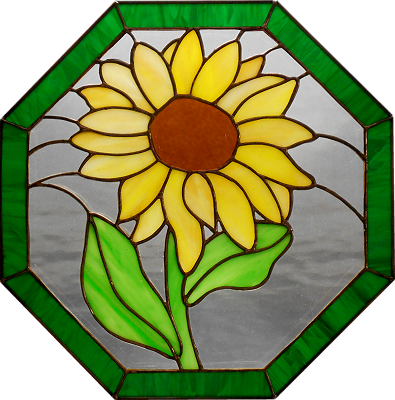 Rowena's Deer Window is officially complete and looks better than ever.  She soldered the back side of this window when she came in and made soldering look easy!  She was concerned about some lumpiness in her soldering but that was attributed to a lack of flux on the second side.  We simply added more flux, went over the bumpy lines and smoothness ensued!  Now it's a perfect window that Rowena can easily be proud of. 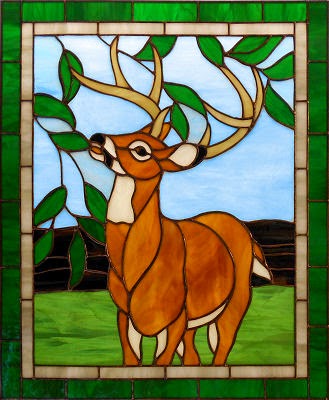 Mary Grace completed her Iris which looks so much brighter now that it's lit up.  Her work has improved in leaps and bounds and I think that soldering is really starting to come more easily for her. Mary Graces biggest fear has been worrying that the glass would crack if she stayed on a lead line too long.  But after a quick demonstration of how much heat glass can stand before cracking, well, hopefully MG will leave a lot of that fear behind her.  I just know that I love her Bird Of Paradise Window. 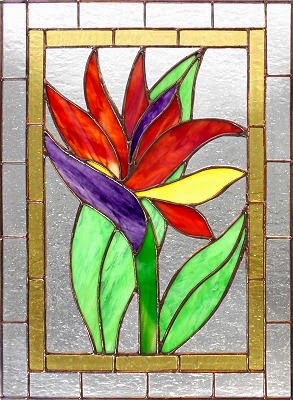 Brenda put the finishing touches on her Football Fleur De Lis Window this week and it turned out wonderfully.  Cam should be very happy with the design and the workmanship in this project.  I remember when Brenda was sure that she wouldn't be able to do stained glass and now she's going crazy making things by herself at home. 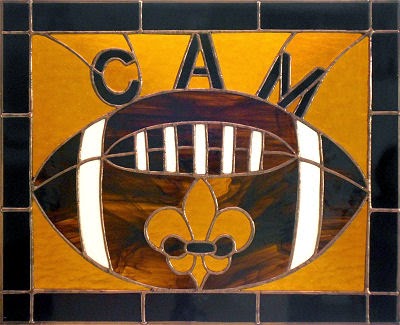 Terry went all out with  her latest Initial window. It's a fancy scripted L that she (as always) drew up herself.  The letter flows perfectly and the colors compliment each other nicely all throughout this window. Whenever I see an L done in this style I start singing, "One, two, three, four, five, six, seven, eight. Schlemeel, schlemazel, hasenfeffer incorporated! We're gonna do it!" in my head.* 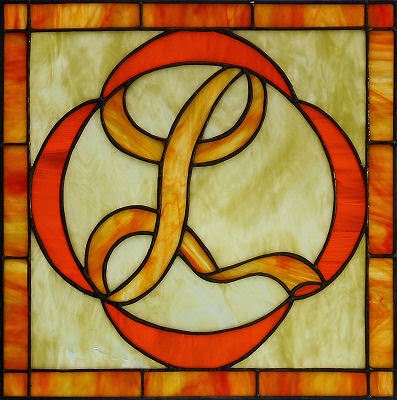 Jane completed a Butterfly Lawn Ornament this week.  This is a large (12inch tall ) set of butterfly wings that are soldered as two separate pieces and then soldered together at an angle to give a 3D effect.   A brazing rod is then bent slightly at the end and attached to the bottom body section of the butterfly allowing the completed piece to be staked to the ground anywhere you please.  And the rod is sturdy enough to keep the butterfly secure during rough wind yet it's bendable enough to allow the butterfly to sway slightly.  It's a wonderful design perfectly executed by Jane.

Carols Tri De Lis is completed looks like it would fit well in any high end art store.  Carol has come so far so fast and I have to compliment her on the design of this window which she came up with on her own.  And to think that in its humble beginning it was a simple little solo Fleur De Lis suncacher that Carol's imagination ran away with.  That's how I started drawing patterns and how Carol is starting as well.

Linda F completed 2 projects this week: a Sunflower Suncatcher and a Hibiscus(?) Flower Fan Lamp.  She did the majority  of the work on these while she was at home and only needed help with the flower stamen on the fan lamps.  A small ball of solder can usually be used on a thin piece of wire but this flower needed a long thin stamen that we made by cutting some copper foil to the correct size and then covering it with solder while we held it in place with a sturdy wire.  The we just cut the wire to the correct length and soldered it to the flower center making a beautiful fan lamp. 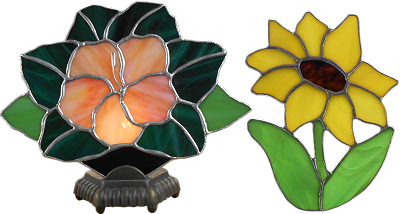 Bonnie's two crosses are completed and they required no touch ups at all.  She brought them in to see how the hooks were attached and then washed and waxed them before taking them home.   If we put hooks on the joint at the top of the cross it will hang cockeyed since the hook won't be centered on the cross,  and if we just center a ring it will pull off over time since it is only being held in place by the foil.  We solve the problem by burying a wire with a hook bent into it along the top of the cross to evenly distribute the weight of the cross and to allow it to come in contact with the solder joint.  I always crop off the hooks so you can't see it in the picture but I'll show it in detail when Betty returns and completes her crosses. 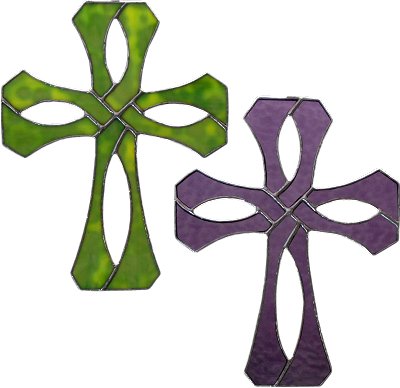 Shelley's Mermaids are ready for wrapping.  We've changed the size of the bubbles to better accommodate our standard  3/4 inch grinding wheel and make the grinding (and cutting) a little easier.  As they were initially drawn Shelley would have had to use the 1/4 grinding wheel to get everything to fit into place.  (And using that quarter inch wheel is never any fun.)  You can see the old size of the bubbles through the new ones which are ground into place in the picture below.

Susan has moved onto a Pumpkin Lawn Ornament which started as a repair but ended up becoming a remake.  Due the the thinness of the pieces in this particular design, it can be VERY difficult to remove a broken piece without breaking other pieces around it.  In the end Susan just took all the pieces apart and then re-cut the broken ones leaving her with what appears to be a completely new set of orange pumpkin pieces.  But some of them are from the original pumpkin so it's almost as though the pumpkin was gutted before getting a remodeling job.  (I think I may be watching too much Home and Garden Network.) 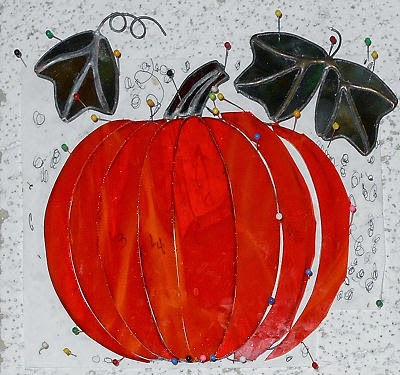 And while we're on the topic of repairing things, Martha's Beveled Window Repair is just about complete now. The  front of the window is  all soldered together and it's just awaiting some of the thinner zinc channel to arrive so we can slap it on, solder the second side, and call this complete.  The channel will be here before Martha's next class so we'll get to see Martha move on to her Iris Window when she returns. 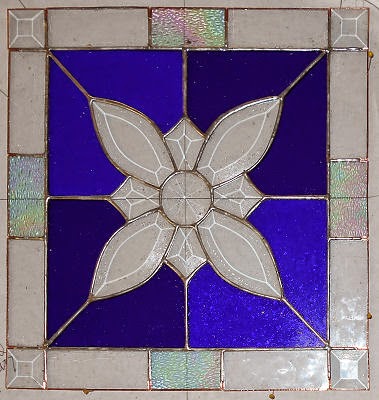 Lynn's 'G' Initial Window is the most complex initial design we've seen done yet.  It's almost 3 feet wide and the scrollwork surrounding the ornate setting of the 'G' is what really makes this window stand out.  Lynn is sort of figuring the colors out as she goes on this project and she's grinding it as she cuts it, so this is fitting perfectly already.  She's leaving extra glass where her jewels will be placed because we don't the jewels yet and we don't want to cut the spots for them until we have them in our hands and can ensure a perfect fit. 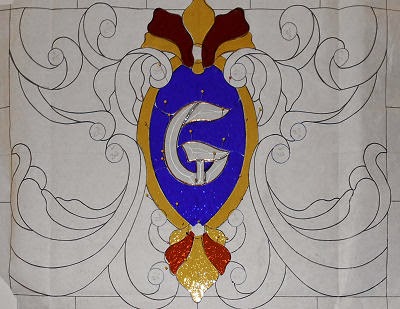 Brenda also began working on a new Initial Window and she got the pattern by doing the old 'trace it off the monitor' trick.   She loved the B design that Ann had made a few weeks ago and brought the picture up on her computer monitor, put some paper over the screen, and then traced the circle and the letter onto the paper.  And that's what we call ingenuity. 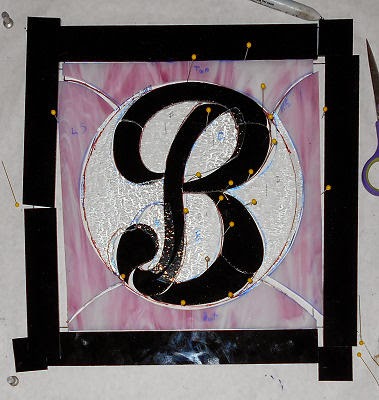 Linda L's got her heart mirrors all cut out and has even begun grinding them.  She was going to go with a 2 piece heart but the amount of grinding was going to be so much that she made the hearts into 4 pieces which are easier to grind without losing any of the charm of the design.  It also  means that she'll save at least one class doing these this way so it's a win-win situation all around!

Ann's got the FDL fever and only has 2 more of the corner FDL's to go before she can start mounting all of these pieces into their respective backgrounds.  And when that's finished she'll have three windows.  And that's the way (uh huh, uh huh) I like it! 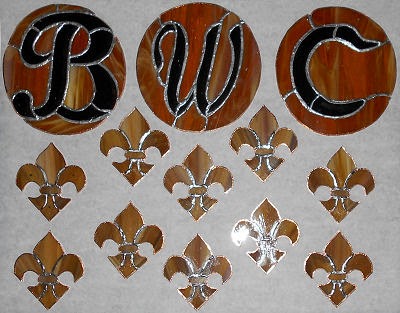 I believe Cindy now has 4 sections of her 6 section panel lamp completed.  Once all the panels are completely soldered we'll just join the 6 pieces together and pretty much call it a lamp!  And Cindy has officially decided to add a small crown which I think is a great idea.  It won't be large enough to be distracting but it will help cover some of the hardware that will affix the shade to the base. 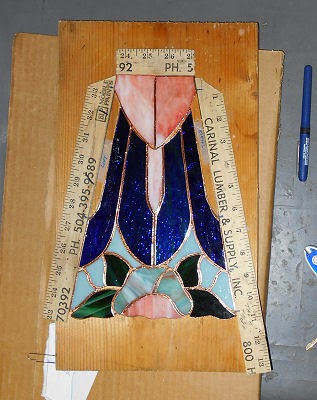 Terry came in with most of her newest initial window cut out but her daughter wanted to know if it was too late to add a strip of black glass diagonally through the center of the design.  Luckily, with just one small modification, she was able to cut and drop that black stripe into place.  The glass itself may be sturdy, put the patterns themselves are pretty flexible. 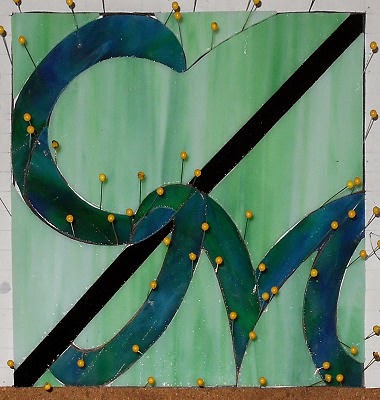 Carol is about to make a one of a kind window since LSU blood runs thick in most of our students veins.  I have no doubt that her Detroit Lions window is going to look great.  The thin line of trim that surrounds the lion seems to have Carol ever so slightly concerned but I know for a fact that she can handle it, especially after seeing how she made that horse head all by herself.  (And if you didn't see it you need to check out last week's post.

Lastly, Becky S wasn't sure what she was going to do after completing her Lady's Legs Windows last week but she was leaning towards a Fleur De Lis.  Since we have a drawer full of FDL patterns she was fairly sure she'd find something that she liked,  And she did.  However, we've had to make a few modifications to the pattern because the window was originally made to be installed into a wall and therefore didn't need any hooks to hang it by.  We're pretty sure we have the situation under control but if not, well, we'll deal with it when we get to those final edge pieces. 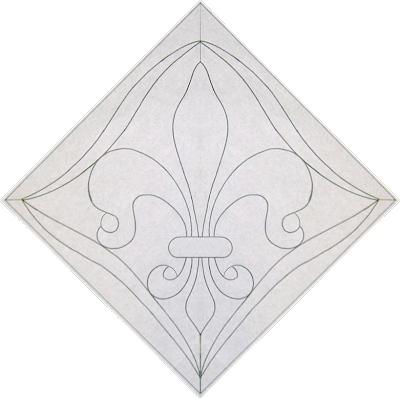 And that's about it.  Please excuse any spelling errors and the nonsensical sentences because this while written in the car while I was headed to Lafayette.  And no, I wasn't driving!

* (In case it didn't strike a chord with you, that was the theme to Laverne and Shirley that was playing in my head when I'd look at Terry's L Window.)
Posted by Bayou Salé GlassWorks at 10:26 PM