Next week we'll end this by showing you how one measurement can be known by many different names yet still translate to the same size.  This is the part that tends to confuse people but once you see the pattern you'll discover that it's quite easy. 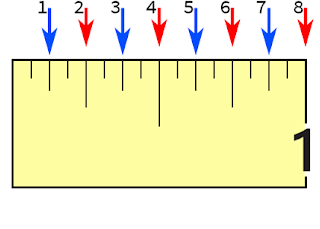 And that's it for our second to last ruler lesson.   Now let's take a look at all of the work that was done this past week.  First off we have Jeannette's completed Pigeon House Window.  After she washed and colored and waxed the work she accomplished last week she added the 5 small windows (taking care to align them perfectly) and added some wire work which creates the railing along the bottom of the red house.  Using wire to form these lines ensured that the grain of the house wouldn't be broken and the pattern would show through as it would in real life (which really didn't photograph well). Attaching the windows afterwards stopped the tower from getting lost in a sea of lead lines that would have had to be added to cut the windows into the sides of the buildings.  This method is far more graceful and makes a more natural effect.. 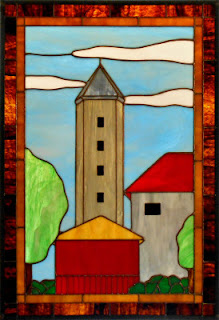 Next up we have Linda F's Humming Bird and Morning Glories Window was completed this week and  which came together wonderfully.  Even the eye of the bird worked out perfectly proving that we can adapt to any situation while making stained glass. 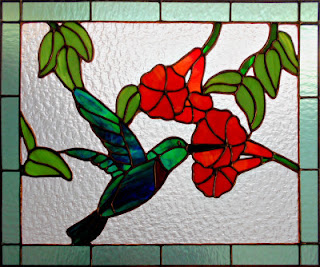 Gale completed her Horseshoe Cross Suncatcher but don't let the word 'suncatcher' fool you-- this is large enough to be a window.  Her attention to detail was top notch and the heart addition works perfectly.  There are more Crosses in Gale's future including a possible return and reworking of this design. 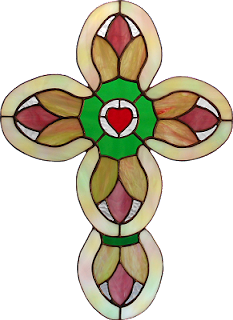 Bonnie's large Winged Heart Suncatcher looks great and everyone loves the Fractures and Streamers glass that the heart itself is made from.  Me, I love the shape and flow of the wings.  They fit the heart perfectly and are easily identifiable. 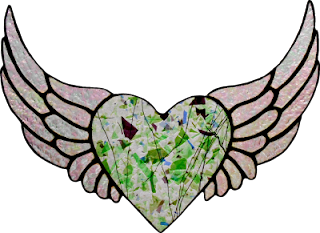 Sue's LSU window is now complete and her football and four green corners help make this design her own.  She's been taking her time soldering and it's showing in her work as each project she turns out becomes better and better. 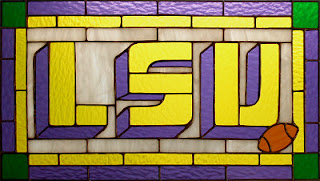 Now we're going to look at a series of Fleur De Lis Windows starting with Betty's.  She completed her shades of black and white Fleur De Lis window which had some students amazed that the FDL was actually grey since it looked like it was solid black while it was flat on the table. But it's the unbroken pattern in the baroque background that really makes this window (although the thin clear inner border was a stroke of genius as well). 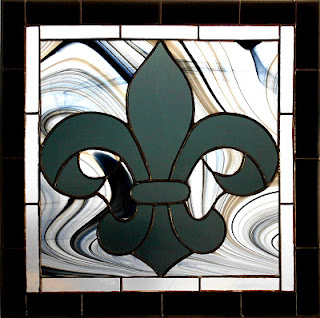 Carol finished her medium sized Fleur De Lis Window by doing the majority of her work on it while she was at home. Her glass work skills are top notch and I love the way she effortlessly multitasks by working on more than one project at a time without ever sacrificing perfection. 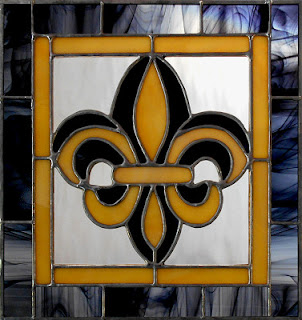 Then we have Rowena's own version of a medium sized Fleur De Lis that she cut into an octagon.  Although it's not red like a stop sign it does make you stop and take pause.  Beautiful work! 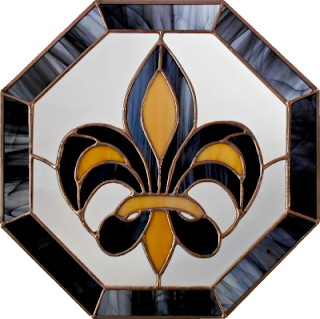 Rowena also put together this quick Christmas Ornament with a few scraps she had floating around.  She was unsure of how the hook would be attached but since it comes out from the top of a point it will be fine even though it isn't attached to a joint. 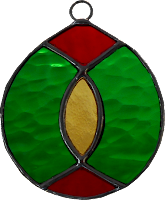 Moving on to our projects that are still under construction we'll take a look at the two large Bird Of Paradise Windows that Charlie is working on.  He had a little help again this week from his wife, Natalia, but Charlie got a lot of work done on his own.  What you see below is actually almost three feet tall and he's got not one but two of these cut out.  He'll begin grinding this next week so look out! 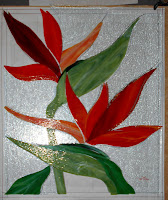 Martha was in luck when Terry brought in a piece of red glass that was so close to what Martha had her crabs cut from that she was able to seamlessly use it for her crab body.  Once that piece was cut she moved onto the corn section but she bagged it all before I could get a picture. So what you see is her corn in a clear bag on top of her window.  I can't wait to see what she'll be cutting out next.

Betty started a new LSU Tiger Claw Window and is now using the pistol grip (that she gave up on using about two years ago) to cut all of her straight lines.  All she needed was a lesson or two on using it correctly.  She simply needed to use it with a straight edge (not a thin ruler), and she also needed a sheet of scrap glass to practice on to perfect her cutting with it before she moved to the good glass.  It's already looking better than ever and you know she's having a good time with the pistol grip because she's even cut out her border with it rather than using the strip cutter!

We never run out of Fleur De Lis being made and this week we get to look at the work Cindy is doing on her Tiger De Lis Window.  She's just one week into it and it's already taking shape.  It's the eye of the tiger you see staring at you in the picture-- or is it the eye of the Fleur De Lis? 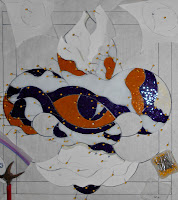 Here's the first of our two full tigers and this one belongs to Susan.  It's all tacked together save for the last border which only needs two small pieces cut before she can do a final tack and then get some channel attached to it to stabilize it.  I know that this is going to look great with a little light behind it.

And Brenda has made astounding progress on her LSU Tiger Stripe Fleur De Lis Window.  It's all ground and she's wrapping her pieces now.  The LSU 'bar' in the FDL shows just how wonderful and exact Brenda's work has become. 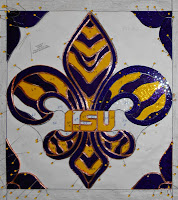 Our second full Tiger Window belongs to Jeanne she's all ready for her border(s).  She came in and filled in the missing pieces of her background, wrapped them and got them tacked into place.  I don't know if she has a border glass picked out but on a window with these colors it shouldn't be too tough of a choice.

Terry has her own Tiger De Lis going on and this has always been one of my favorites.  I wish I could have taken credit for coming up with this design but it's Terry all the way.  She's made little changes throughout each of these Tiger's iterations and she's got it perfected now.  This one will be seeing solder real soon. 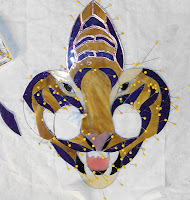 Linda L is also making a lot of headway into her three Santa Claus Windows.  She's got one tacked together, one ground and ready to be foiled, and the third is all cut and being ground as you read this.  We're going to be painting eyeballs onto Santa since cutting them into the face would be next to impossible considering their size.  Linda will be framing these (somewhat) and you'll see how that works out when we update her progress next week.

Shelley also filled in missing pieces (save for the eyes of the fish) and got her border cut and attached.  She wanted it to be bright and vibrant and that's exactly what she got with the brilliant yellow that she picked out for her border.  And just for a little extra pizzazz  she went and put bevels in the corners.  This is now ready to get a zinc channel attached to it and that will happen next week for sure.

Mary Grace has all of her Holly Decoration cut and ground and has begun wrapping it as well.  The last thing she added were the six Holly Berries which are actually glass globs.  No cutting required!  We like that.  There's a great chance that Mary Grace will have this completed when she returns so look to see this showcased in our next update. 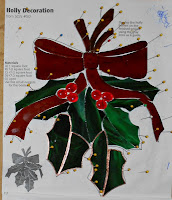 Paula's Hurricanes Logo Window is all tacked together and she's about to begin the letters that will spell out the team name across the bottom.  Once that's finished this will only need a border and some solder.  Paula's attention to detail is what makes her work stand out.  Everything always fits perfectly no matter how small the piece. 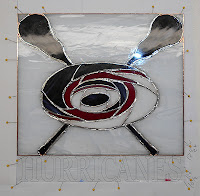 Jeannette also worked on a Sunflower and another Butterfly Lawn Ornament this week.  Both are ground and ready to be wrapped which Jeannette hopes to do while she is at home.

Myrt's Cross De Lis is ready for its background to be cut.  She has the glass all picked out so when she comes back in next week she should have all of her glass cut for this project.  She's  moving really quickly on this one and making it look easy. 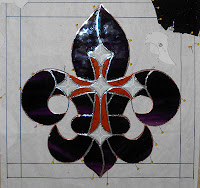 Rowena is working on another Fleur De Lis Window and is starting with the actual FDL itself.  Once this is tacked together she'll surround it with glass, add a border and move along to her next project. 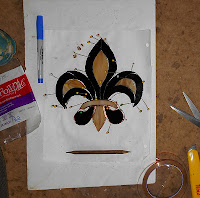 Sue is making this Sitting Cat suncatcher and when she left there was very little left to be done on it.  I'm pretty sure that all she needs to do is bead the outer edge and then add hooks.  Consider this done!

Bonnie cut out 3 different Lilly Nightlights and has her first, off-white Lilly ground.  She has them cut in assorted colors and will surely be assembling them soon.  You can see the pieces for the other two surrounding the pattern and I believe that she plans on cutting out at least one more of these. 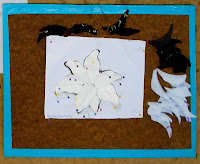 Carol has begun work on a large, six paned stained glass door.  Luckily each pane is a separate window which makes working on this so much easier.  We played around with different sizes for the diamond accent pieces that will be the centers of four of the panes and decided that the smaller diamonds looked best.  (You can actually see the larger one drawn out in pencil under the clear background glass).  She's still deciding on what glass to use for the border but I think we'll see what she picked out  in our next update.

Vickie has started working on a big, but small, project this week.  She's making ten Butterflies and has the bodies all cut out already.  She's taken a lot of the wings home and hopes to get some of the work on cutting them out during the week.  I suspect that when she returns we'll see more than a few of these laid out and ready to be ground.

Lastly, we take a look at a window that one of our former students mailed us.  Denise shared  the progress of this window with us as she was making it.  Never one to back away from the challenge of small thin pieces, Denise's finished Louisiana Tiger Design is a true work of art. 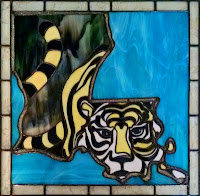 I received a very pleasant phone call today from Janet asking if she could come into class this week.  I was too excited about her returning to even joke about not having any room or table space for her.  I guess you can say she caught me off guard because normally I wouldn't miss an opportunity like that with Janet.  It will be great to see her again and I know everyone is looking forward to having her back.

Posted by Bayou Salé GlassWorks at 9:29 AM