Students are never sure where they should put breaks in their windows or how they should place them.  Superfluous lead lines should be avoided whenever possible but there are times that they just can't be helped.  take the flower in the drawing below.  The background glass needs to be be cut to position the flower in the center but the question is where? 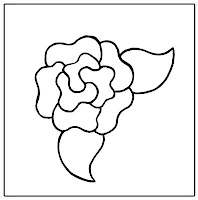 First of all there are no absolutes in the answer to that question.  There are actually many ways to handle the situation but I hope can offer a few hints on how to make necessary lead lines appear less harsh.

First off, straight lines are very rarely the answer.  There are times when straight lines will be acceptable, but they tend to only work with geometric shapes like crosses, diamonds or bevel clusters.  When you have a flowing flower the lines should all curve

Secondly, any time you have glass coming to a point (as in the ends of the leaves in our example) you will need a line coming from it.

Thirdly, make the lines as small as possible.  The lines are there for construction purposes only and shouldn't get in the way of the design.

Below is a perfectly acceptable way to break up the background but it just looks 'clunky'.  It doesn't flow and it steals attention from the flower which should be the focal point of the window. 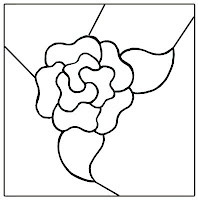 Next we see lead lines placed in the same positions as they were in the example above, but we've softened them by adding curves to the lines.  This simple addition makes the entire window flow and because of this you eyes go naturally to the flower in the center. 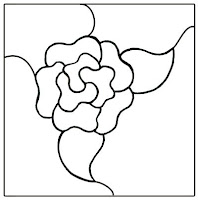 Just remember that lead lines should be small and unobtrusive and you'll be positioning them like a pro in no time.   Next week we'll discus methods to actually hide your necessary lead lines.

Now that we have that out of the way let's move along to Ann's Cross Transom Window which got its final soldering completed this week.  Ann spent a good deal of time washing, waxing, and coloring her window which is always a very good thing.  These last processes are often brushed over but they are so very important to how the window looks in the end.  Ann spent the better part of a half an hour just waxing this but her lead lines absolutely sparkled when she put the wax way.  Ann was able to finish this quickly which allowed her to leave with it in time for her daughter to actually get to see it while there was still light outside. 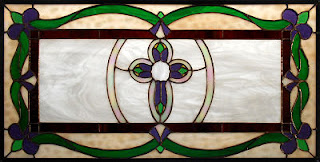 Terry's completed the first of her two sectioned Spiraling Flowers Window.  There's no border running along the top edge because that's where it will connect with the second window allowing the flowers to flow upward and to the right.  You don't even have to imagine what it will look like because as you will see a little further below, Terry has the second half of this all cut out already. 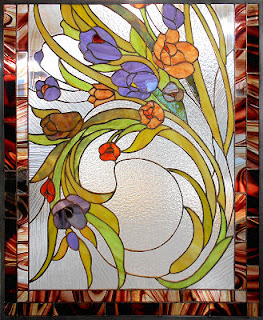 Martha's completed her Fleur De Lis Window and what a window it is.  She got so excited at one point that she threw her solder on top of it and broke two pieces!  (Never grab the hot end of the roll of solder!)  I'll bet that if your life depended on it you'd never figure out which pieces were broke though because when we repair windows we do it right. 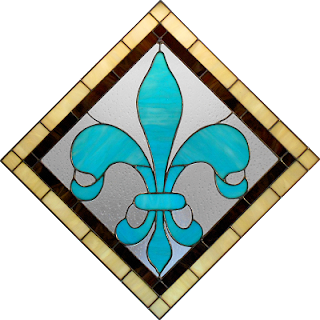 This is our first of three completed Study In Straight Cuts Windows this week.  Using all clear textured glasses and bevels, Jan forged her way through her first project with us in record time.  She's mastered the Pistol Grip cutter and her soldering is simply out of this world.  Her next project with us will be very unique and you'll see that a little further on down in this post as well. 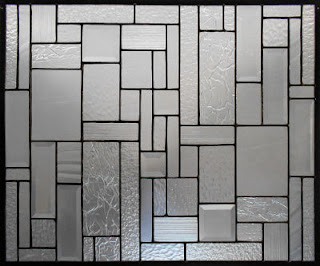 Well, we haven't seen one of these in a while.  Although it may not quite be the time of year for this Nativity Scene you can rest assured knowing that Carol has made this for use as a Christmas gift.  I do believe that makes this our first Christmas project of the year.  Someone's going to be happy at Christmas! 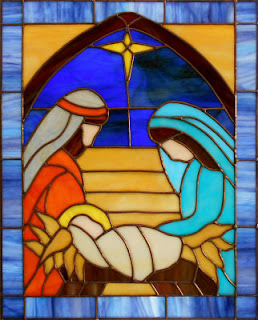 Next we look at our second rendition of a Study In Straight Cuts, this one created by Bonnie.  Hers incorporates both bevels and the use of some color which makes for a very striking window.  You've got to love the red baroque glass Bonnie used in this.  If it were mine I'd call it 'Blood Bath' or 'Washing Away The Evidence' but we'll just call it a 'Study In Straight Cuts'.  (But that works too-- get it? Cuts, blood...) 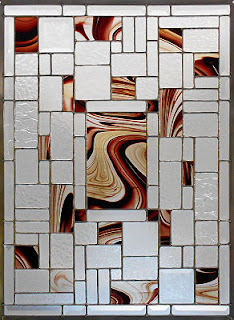 Judy put this 3D Sunflower Lawn Ornament together perfectly all by herself.  Not only that but her soldering was flawless as well.  All I did was cut a stake and attach it to the back and this beautiful flower was ready for mounting! 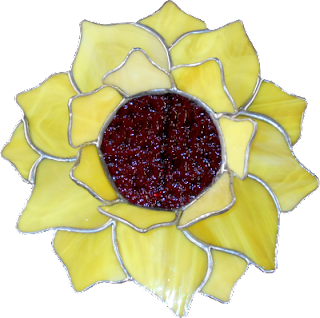 Linda F completed our third Study In Straight Cuts Window and as you can see, no two are ever alike.  Linda went with a colored border and a single clear glue chip bevel in the center of her window.  Linda certainly has mastered the use of her pistol grip. 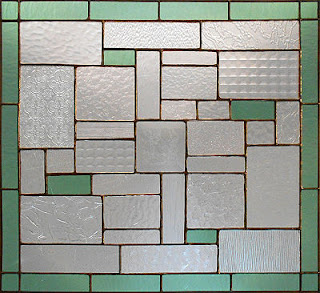 And Betty has two more Butterfly Lawn Ornaments under her belt.  She's really going to town with these as you will soon see.  I'm thinking about changing her nick name to 'Two Or More Betty'! 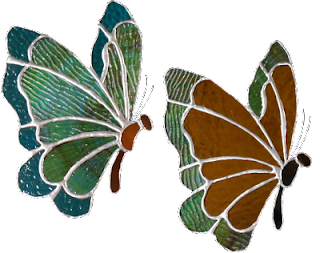 Becky was about to start cutting her background pieces when we realized that we had a few cuts in this window that just weren't possible to make.  We added a leaf, threw in a minor (small) lead line and now things are going to work out perfectly.  Becky was unsure if we were going to slide a piece of glass under this to trace out the background onto but we aren't.  The general rule for making that decision is to look at how much glass you'll save and how much you will waste.  In this case it's far easier and more practical to cut the background from pattern pieces which will use less glass. 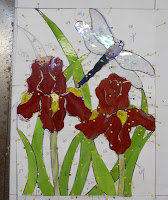 Next we have the the top half of Terry's Spiraling Flowers Window.   All the glass (save for the borders) is all cut and Terry has even begun grinding the pieces already.  This is a window that is REALLY moving quickly! 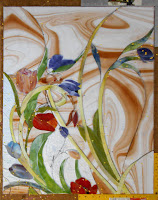 Brenda's got all of the glass cut that forms the fish in her Red Fish Window.  She wanted to know if she should cut out her remaining pieces or if she should begin grinding it and I told her that if I were doing it I wouldn't begin grinding until everything was cut out.   Doing it that way allows for a margin of error that you can't get while grinding your pieces as you cut them.

Mary Grace is moving along wonderfully on her Beach Scene Window.  She did the toughest parts first (which I always recommend doing) and once the palm trees were put together she began cutting out the sand.  Doesn't it look GREAT!

Susan R has all of her six sided panel lamp cut out and has begun grinding it to fit in the jig that will ensure that this lamp lines up perfectly when it comes time to tack all the sides together.  This is the second of six panels that she has completed so she's moving along wonderfully. 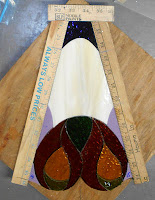 This is Jan's newest project-- a Circular Beaded Tree and Bird.  I know that it's hard to see what it  looks like now, but trust me when I say that it's going to look great.  We already have someone else who wants to make one of these! 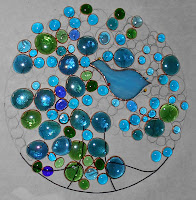 Judy is working on two mirror image Fish projects and got a lot cut out during class this week.  Her cutting is very precise which means that Judy won't be spending much time at the grinder at all.

Mickey Mouse got all of his background cut out this week and Jeanne is doing a wonderful job on him.  There's just a little skimming to do on the blue pieces and then this will be ready for its border.

Cindy's LSU De Lis Window has it's front side soldered and the back side is just about completed.  I flipped this around to see how much touching up would be needed on the front side but I can proudly say that it is perfect.  This is, without a doubt, going to be completed upon her return to class. 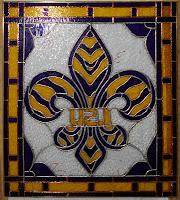 Sheri's got all of her glass cut out for her Crab Window and she's even begun grinding it already.  She had taken the background glass home with her so she could cut her pieces in between classes and what a great job she did.  I'm thrilled to say that Sheri's not afraid to just dive on into a project. 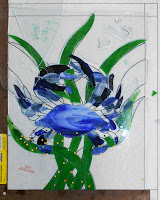 Carol also worked on this Cross Window while she was at home.  She wrapped it while in class and I was shocked to learn that she made all of these cuts with her hand cutter.  I always recommend using a pistol grip and a straight edge to cut straight lines but the straight cuts that Carol did by hand were perfect.  She'll be soldering this before you know it. 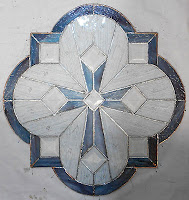 Our second Mickey Mouse project this week is also our second panel lamp project this week.  With two of the faces tacked together Linda L will be ready to start on the other pair of mouse faces.  She's wasting no time in getting these completed and her work is spot on. 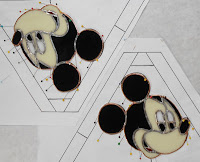 Next week Myrt will have her border color picked out and attached to her first of three (?) Cardinal Windows.  She'll be adding some decorative berries to this one as well. 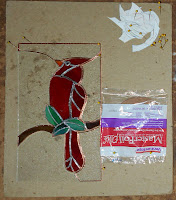 Becky S has already got so much done on her Large Spiral Window.  At this point there's just three borders to go along with the leaded fill in pieces.  The extra border is really going to make this window stand out nicely and the larger pieces mean that the lead work she'll be doing on it will show more as well. 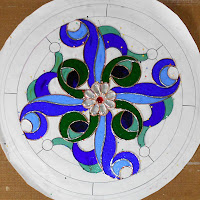 Vickie came in with a repair to do on one of the Butterfly Suncatchers that she had made but in the end we had to say that the original Butterfly was totaled.   With only one piece still intact, it was far easier to just remake the entire butterfly.  Sometimes you just have to admit that there's nothing worth saving.  But look how perfect her replacement Butterfly is. 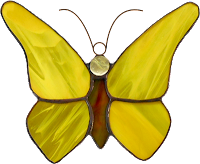 We are now entering the Lawn Ornament section of this post.  What you see below are the Dragonfly and two Butterfly suncatchers that Susan got all cut out .  She'll be adding stakes to the back of each of these to turn them all into Lawn Ornaments.  There's only one more left to grind so Susan is making excellent progress on these. 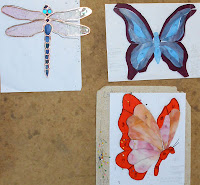 And Betty is busy as a Bee making three of her own Butterfly Lawn Ornaments.  Now she's playing with different designs and I love that. 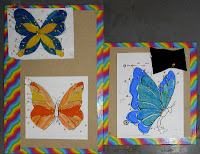 And that wraps it all up for the last week of May.  Where IS the year going???