Two weeks ago I promised a tip about hiding lead lines.  Since I didn't deliver last week I went a little overboard with my example and really went to town on hiding the lines.  Let's look at a simple Cattail and Leaves Window.   There's absolutely nothing wrong with it at all and everything flows nicely.  Still, there are all those extra lead lines coming from the points of the leaves that could (for the most part) be easily hidden.

All I've done in this next version is to either extend or shorten the leaves so they end at another line.  I've also shortened the lead line coming from the left lower Cattail by swinging it to the right.  This makes it far shorter than it previously was and hopefully less distracting.

Now, in the next picture you can see I've added an entirely new element: a circular border within the original framework.  By doing this we have many more lines that we can end our leaves at and we may now completely omit the extra line coming from the left lower Cattail.   It only adds 10 extra pieces of glass to the window and the end result is that there are no unsightly leads lines that exist solely to make cuts possible.  This is what I strive for in windows, although it isn't always possible.

Okay then, so let's look at Sue R's Lamp!  This will go in the same room that her Peacock Feather Transom is in and it matches perfectly.  Her work on this was top notch and it all fit together perfectly without any regrinding required at all.  This is the way I like to see things go together-- flawlessly.  Sue got to see how we tin a brass cap so that it matches the rest of the lamp and I know she was excited to see this project completed so she can put it on its pedestal table at home. 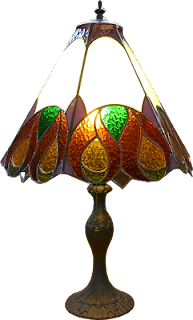 Rowena's Beveled Transom Window was completed this week and it's a long one!  Sixty-eight inches long by 12 inches high makes this one extensive window.  Rowena replaced the center oval bevel with the number 179 and it blends in beautifully. There's wonderful work all throughout this window especially with her soldering.

Shelley put the finishing touches on her Red Fish window and it also looks great.  She's made this window entirely on her own with no help from me at all.  She's done amazing work on it and it certainly shows. 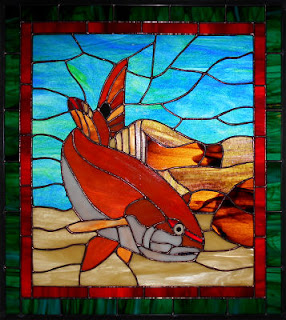 Myrt Finished the first of her Cardinal Windows and the next one will have flowers mixed into the leaves.  This one looks great even without the flowers but for some reason the brown border glass didn't photograph well and makes the window appear much darker than it really is. 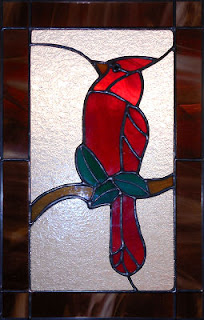 Cindy's been busy sand blasting and these are her first two suncatcher creations.  She's got one more in the works that we'll see a little further down in this post. 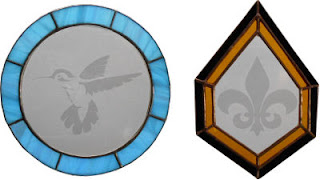 Our newest student is Lara and her butterfly was made with the kind of colors I would pick-- subtle but distinct.  Lara had no problems with any step of the stained glass process and I was impressed at how she immediately understood all the concepts that revolve around each step.  I predict that we're going to see great things from Lara. 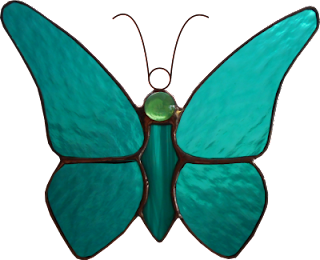 Bonnie's Round Cardinal Window is coming together beautifully and she got all of the cutting you see in the picture below done in just one class.  Not only that-- she's managed to begin grinding some of her pieces.  Next week she'll get the background cut and then start grinding. 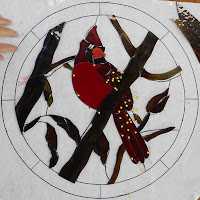 We have another Red Fish cut out but this one is a fish of a completely different scale.  Brenda now has all of her glass cut out and will move on over to the grinder when we see her next. 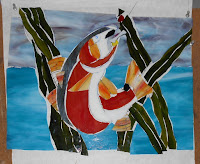 Betty has all of her Pelican cut out as well as the splash at the bottom of the bird.  She's changed the splash color from white to a blue that is much lighter than the glass she'll be using for the rest of the water which I think is going to look great.  Next up for Betty will be the water and then her sky. 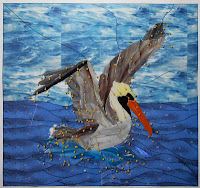 Jeanne's Micky Mouse Window is all cut ground and wrapped.  She changed the glass in Mickey's mouth above his tongue to black and it really makes a big difference.  Look out solder-- here comes Jeanne!

Becky S's large Spiral Window is getting its last lead border all cut and wrapped.  You can easily see all of the pieces that Becky has covered in copper foil and next she'll add her final glass border.  This window is almost finished! 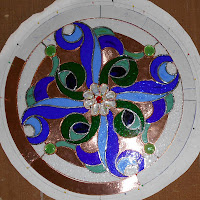 Linda forgot to bring her first two Miky Maoys heads in this week but that didn't stop her from working nonstop throughout the class.  She has her four background pieces all cut to size and next she'll grind the heads into place as you can see in the bottom mouse head.  And all of this will happen inside the wooden jig that we made for it this week.

Carol started a new window while she was at home and when she came in all she needed was two borders and four corner pieces.  It's all together and Carol will be soldering this and maybe even completing it next week.  I just hope that Richard likes the border color.  ;-)  Also, note the border within a border which helps cut back on extra lead lines.

Ann got all of her Rose Window ground and has even begun wrapping her pieces already.  When I look at this I keep thinking one thing:  A double border would really look great on this.  Just saying! 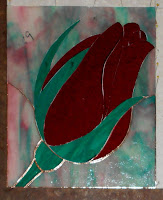 Next we have Jan's Bird in A Tree Suncatcher  which really looks amazing.  She has all of her globs wrapped and positioned so when she comes back in all she'll need to do is cut out the remaining five pieces that form the sky, the land and the tree trunk.  Once they fit into place she can begin soldering this intriguing looking window. 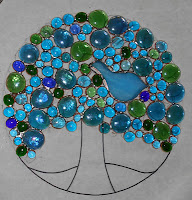 Linda started working on what will be a Shell Panel and she managed to get the shell portion all cut and ground.  Aren't her colors perfect? 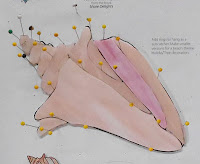 The good news is that Jeannette has her Peacock completely soldered.  When she returns next week this will be washed and colored.  She'll be adding a wood frame to it (for stability) and I can't wait to see this hanging up with light behind it.  Jeannette has also started working on a much smaller peacock window (over to the right) which only needs its background cut at this point. 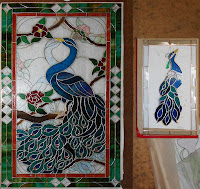 Martha's Rose window is all ground and she'll be wrapping and tacking this when she comes back in.  Since the Rose is tightly grouped in the center of the window she'll tack it together and then trace around it while it sits on top of the glass that she'll use for her background.  There are a lot of lead lines, but they all travel horizontally which will make the cuts easy. 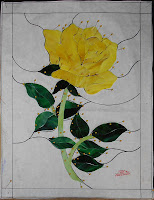 Mary Grace tried to raise the ocean level of her window but made a slight error in design by doing so.  In the end we put it back down where it was and then she added a sky color that I NEVER would have thought about using.  And in the end it's gorgeous.  I'll be making a mental note of this because it's a beautiful change from the standard blue skies that we always see.

Then we have Sheri who has all of her pieces ground.  She's changed the bottoms of the two Crab Claws from blue to red and I like the new look.  She's got three missing pieces that we aren't going to replace until all of these are tacked together.  This will ensure a perfect fit since the pattern no longer likely applies with all of the grinding that was done to this. 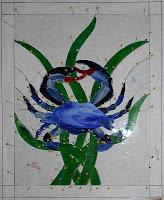 Susan is making great strides with her Flower Cornucopia and she has two more insects ready to be wrapped.  This is an odd project in the sense that there is no real pattern, just an idea that comes to life as we start tacking everything together.  Because of this no two will ever be quite the same.

We have a second Transom Window in the works and this one is by Terry.  She's already begun grinding her borders so she's making real quick work of this design.  I assure you it's bigger than it looks here in the picture partially because it all won't fit in the camera viewfinder because the ceiling is in the way!

And this is Cindy's third Etched Suncatcher which is still in the works.  It's kind of hard to tell that it's a rose while it's sitting on the table like that but I suspect you'll see it more easily when we return next week and it has some light behind it. 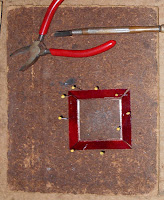 Lastly, we have three different Butterfly Lawn Ornaments that were completed this week.  The butterfly on the left was made by Betty, the one in the middle was made by Linda F and the one on the right by Gale. Each is beautiful, and so are the butterflies.  :-)

Now that we're at the end of this post we're going to take a deep breath and brace ourselves for the classes which are starting all over again even as you are reading this!