We'll start off this week with a tip that I see too many of our students not following.   The positioning of your pattern pieces onto the glass your cutting from is very important in making your cutting and grinding easier.  For example, you should never rest the curve of a piece against a straight edge of your glass.  Instead, place the points against the straight edge.  This is ALWAYS the way to handle a cut like this.  Why?  Because your first 'point to point' cut is already cut for you and you have more glass behind the piece to allow for the curve to come out without breaking. 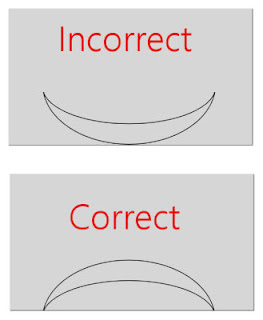 But there's even a better reason to position your glass this way.  When you cut a curve that rests on a straight edge of the glass you will ALWAYS end up with two shards on the curved end of the piece you are cutting (as seen directly below) which will need to be manually ground down the make the piece curve smoothly. 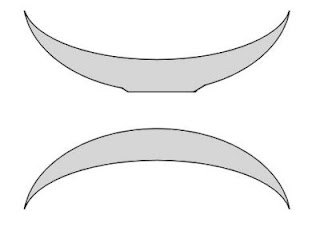 If the piece is placed with the points on the straight edge you can easily get this outside curve to come out with just one cut and avoid having those shards which will need to be ground (as seen above).  Why grind needlessly when you don't have to?  Always think ahead as to how you will position your pieces on your glass and also in what order you'll make your cuts to free each piece from the sheet.  Doing this will save you a substantial amount of time while your at the grinder.

Well, it's official, Jeannette has done it!  When she started classes with us she said her goal was to make herself a large peacock window.  At the start of this year she decided it was time to begin that project now that she has enough experience under her belt.  This week she got to see all of her hard work pay off in spades because this is one beautiful peacock.  It measures a large 25" x 41" and is one of my favorite windows that a student has made.  What wonderful work Jeannette has done here-- she should be very proud of her accomplishment. 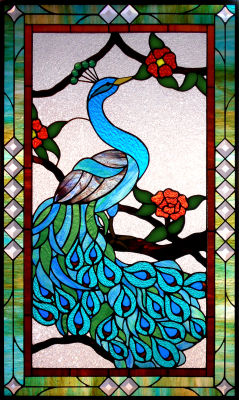 Carol's got a nice Religious Window completed and the alternating grain in the two different borders help set them apart perfectly even though they are the same color and even go so far as to overlap.  Again she worried about her soldering but again there was nothing to worry about.  Pass the wine, please! 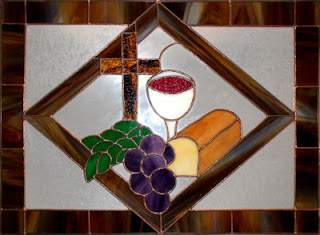 Jeanne has completed her Mickey Mouse Window and added wire accents which really bring out Mickey.   You can see these accent pieces in the white gloves, the yellow boots and in the corner of Mickey's mouth.  Next week we'll cover this technique as a tip and show you before and after pictures to illustrate how something so little can make such a big difference.  Great work! 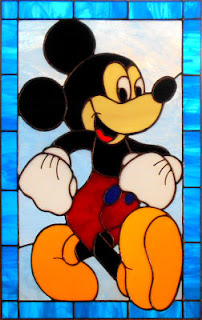 And Cindy completed her third etched Suncatcher.  As you can see this one features roses in a nice red frame. 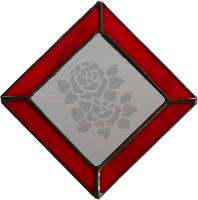 Betty got all of the ocean water cut out for her Pelican Window and began grinding those pieces.  Once the water and bird are tacked together she'll be able to put this on top of a piece of lighter blue glass to make cutting out the sky easier.  At least that's what I'm currently thinking-- we'll know for sure when I look at it again and we decide if the lead lines in the sky will allow for this process. 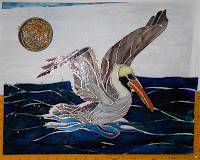 Bonnie continued work on her round Cardinal Window and now has it all cut out save for the border.  She's begun grinding all of her pieces and is moving along at a nice speed on this-- faster than I would have thought.  She says that she'll be making a sister window to this after it's finished so expect to see Bonnie making a similar window right after this one. 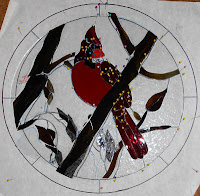 Jeannette's second Peacock window is much smaller but equally attractive.  She'll be cutting the background for this when she returns and then add its final border.

Then there's Cindy who is working on another line of Birds.  She's made this project once before and I distinctly recall that it turned out beautifully.  As things stand, and looking at the work that she has done on this one, I can't see why this one will be any different!

Our newest Student, Lara, began cutting out her 'Fleeting Stillness' Window which is also known as a Poppy Window.    She has her flowers cut out and has figured out just how to hold her Breaker/Grozier pliers to get the glass to bend to her will.  :-)  She also has her background pieces all traced out and will cut those out when she returns. 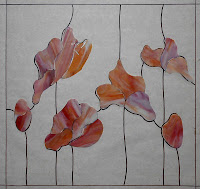 Linda F got all of her Shell window cut out which includes the border.  Her choices for glass on this are absolutely perfect and we'll certainly see this lit up when we next see it again. 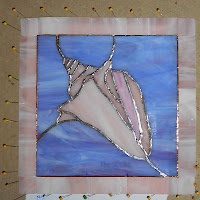 Linda L has a her four Mickey Mouse Lamp Panels all cut out and is now working on wrapping all of the red border pieces for each of the four sides.  Below is a look at one of the panels for this lamp.  I believe that it's going to be wonderful (as in 'The Wonderful World Of Disney'.)

Martha has most of the background cut, ground and attached to her Yellow Rose (Of Texas) Window.  She had two sheets of Rainwater glass to work with yet we were able to place all but two pieces of the background one just one rainwater sheet of glass.   She'll most assuredly be adding a border to this when she comes back in. 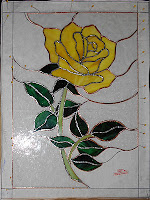 And speaking of borders, Becky S is ready to cut out the eight pieces that make up the final border to her Spiral Window.  She's doubled the red jewels that she'll be using in the last lead border and I think it balances it all out much more nicely this way. I always say that 'less is more' but too little is always less than enough. 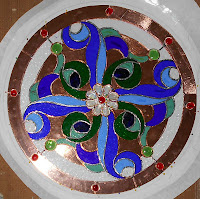 Terry has made huge strides with her Transom Window and has it all cut out and tacked together.  She even has the front side soldered already.  Russ is going to bend a zinc channel to fit around this which should prove interesting due to its irregular shape.   I, for one, can't wait to see how this turns out.

Shelley is cutting out the same smaller Peacock suncatcher that Jeannette is also making.  Shelley may or may not turn this into a window before it's finished but I really don't know for sure right now.  We'll uncover more about this mystery when Shelley returns next week.

Tasha had a small stained glass incident when the pattern she was working on last week managed to stay at home rather than coming to class with her.  We've seen this happen plenty of times before but Tasha didn't panic-- she just shifted into Hand Mirror Production Mode. She's moving along quickly on this blue flower hand mirror and is putting her own artistic touch to it.

Meanwhile, Charlie (Tasha's husband) has all of the glass cut out for the borders on his second Bird of Paradise Window.  He's taken the clear outer border pieces home with him so he can wrap them during the week and was smart enough to number each piece so he knows exactly where each one will be placed when he comes back in and then moves along to soldering this window.

And Ann's Rosebud Window is now ready for it's borders.  I had hoped that she'd go with two borders and it turns out that the pattern was drawn up that way to begin with.  Since she didn't have her border glass with her Ann decided to solder the front of this window to help save time later.  She'd also solder the back side as well, but of she did that the border wouldn't attach evenly.  Remember that you never solder the second side of a window until all of the glass you will be using in your window is tacked together.  On a side note, if you look closely at the bottom left of her pattern you can get a hint as to what Ann will be working on next. 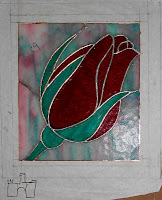 Mary Grace is finishing up the wrapping process of her beach sunset window and will most likely add a border to this when she returns.  She has one broken piece of water but we're going to replace that when this gets tacked together to ensure a perfect fit on the first cut.

Then Brenda resumed the grinding process of her Red Fish Window.   And how do you grind your pieces in the most effective manor?   By placing  one piece on top of the other and tracing around it. It also makes for a wonderfully fitted window as well which is what Brenda has here.

Rowena is starting a Stylized Dragonfly Window and it's done a little differently than most windows.   She's cut all of her background glass while omitting the Dragonfly from the window completely (at this point).  She's begun grinding these pieces and will again omit the Dragonfly even during the grinding process.   However, before she starts wrapping her background pieces she'll make the dragonfly as a completed suncatcher and then position it on top of the curvy background pieces.  Then she'll trace around the dragonfly and recut the pieces it overlaps ensuring for a perfect and easy fit with minimal effort.

Susan got more grinding completed on some more  decorative insects for her Flower Cornucopia piece.   She'll be working on leaves before you know it and when that happens you'll know that this will be completed soon after.   I can't wait to see how this all fits together because I think it's going to be turning heads in our other classes.

And lastly, Susan R worked on a monarch Butterfly Lawn Ornament as a replacement for one that hit the ground during a wind storm.   She's added traditional monarch dots into the wings of this version and has everything cut and fitted together for this. 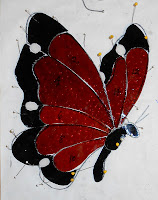 And that brings us up to date on our weekly classes!