Pop Is Just One 'O' Shy Of Poop

When cutting curves it's very important that the curve be smooth and graceful.  Sharp points on a curve stand out like a sore thumb and they shouldn't happen since they're extremely easy to fix.  The biggest problem people have with grinding curves smooth is that they re-grind the entire piece rather than just the problem spots.  You can see in the picture below that the curved piece on top looks more like a stop sign rather than a curve.  When cutting out your pattern pieces do your best to follow the lines on the paper and remember that there are NO points on a curve. 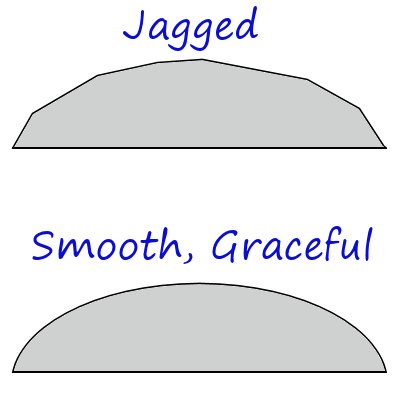 When you cut the actual glass you will always end up with flanges that should be ground down.  Remember that after the piece is initially skimmed on the grinder you ONLY need to touch the 'sharp' points (the red arrows are pointing at these) to the grinding wheel to round off your curves.  Grinding the entire curve won't fix the high spots, it just makes everything smaller.  Remember to grind only the areas that are jagged.

Speaking of flowing, graceful curves, Becky S completed her free flowing American Flag and Eagle Window which is as patriotic as patriotic as can possibly be.  The work on this window is flawless and Becky's use of Blue Baroque glass for the final border literally gives the window a flowing effect.  Since each strip fit the length of each side of her window, Becky was able to line up her border pieces and keep the flow of the glass intact.  It's a subtle yet striking way to handle baroque borders (if possible). Perfection all around. 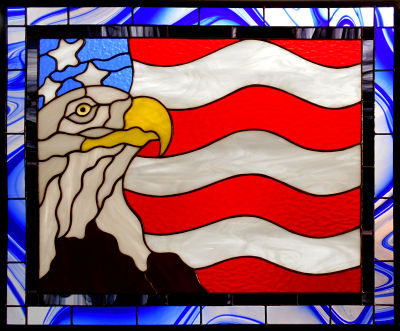 Then Cindy completed her latest pair of Suncatchers.  The Large Candy Cane is a very elegant design and her Christmas Bell turned out beautiful as well.  Next week we'll see how her Wedding Silhouettes are turning out. 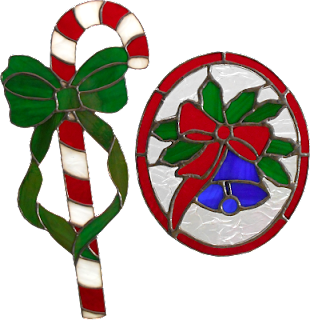 Susan D completed two more pieces for her flower cornucopia and has even added a 3D effect to this now standard Butterfly design.  It turned out very nicely if I do say so myself.  Look to see this all come together and take shape shortly. 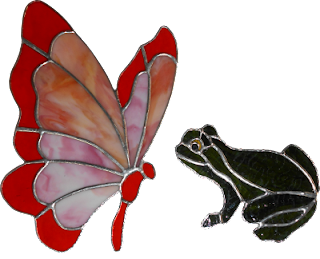 Carol came in and got her background and border cut, ground and tacked together on her Peacock window.  Before she did that she changed one of the pieces in the head of the peacock to give it a more artistic flow.  Art isn't about matching real life, it's about making it more beautiful!

Barbara H's Crab window is almost complete already!   With everything tacked together she's even got the first border cut and ground.   She's taken the pieces home to wrap and next week we'll surely see the final border added to this window. 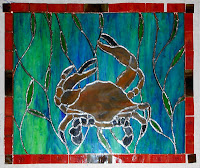 Charlie has his American Flag window all tacked together and it's ready for solder.  In fact, the front side has a lot of the soldering completed already.  Charlie has taken this home where he hopes to do even more work on it so there's a good chance that this will be completed when we next see it. 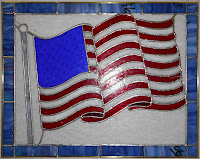 And Jan finished soldering almost all of the second side of her Basketball Window which means that this WILL be completed next week without a doubt.  At almost 4 feet tall, this window is much larger than anyone ever thinks when they see the picture of it here in our weekly posts. Alas, it also means that it will take longer to wash and color.

Jeanne is filling in the missing pieces of her Tiger De Lis Window and will soon be wrapping it.  This is another window that incorporates pieces of glass covered with lead and it's going to look spectacular. 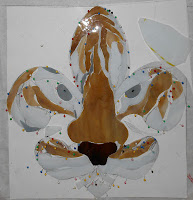 Bonnie got her second Cardinal wrapped and tacked together so she then cut her background out of glue chip.  This window is a mirror image of her last one and will be ground and then wrapped and tacked into place when she comes back in next week. 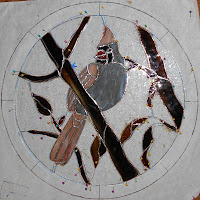 Lara resumed grinding her Mermaid window and only has a few strands of hair to go before she can start wrapping all of these pieces.  She still needs to cut some bubbles into the background glass but that will easily be accomplished once she has all of this fitting together.  If you ask me, the wrapping on this will begin next week! 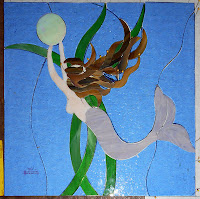 Linda F has all the grinding completed on her Stylized Calla Lily window and even has it wrapped and tacked.  There are two pieces that didn't fit very well so she's pulled them out and left empty spaces in their place which she will fill in now that it's tacked together.  This is by farthe best and easiest way to handle a situation like this. 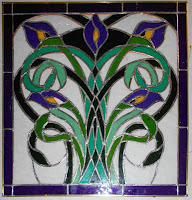 And our other Linda, Linda L, has begun work on a large Industrial Fleur De Lis.  It's one of my favorite windows and there are plenty of soldered sections throughout it that trace around and throughout the Fleur De Lis.  Linda has all of this cut out with clear scrap glass that she will completely cover with foil and then solder over.   You'll see that happen during the weeks to come.

Sheri has made great strides with her Dragonfly Window and I have no doubt that she'll be finishing this soon.  This week she got her dragonfly and gems actually cut into her background pieces and then she tacked it all together and added the first thin yellow border of the pair of borders that will surround this.   Great work for sure! 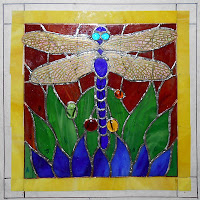 Terry's got her Gladiolus Window all tacked together and it is ready for solder.  Her border glass is among one of my favorite glasses and her work is top notch.  I'm always impressed with Terry's ability to design her own patterns.

Lynn got a little bit over zealous with her grinding and ended up with more water on her shirt that she did in the grinder but the pieces in her Tulip Window are fitting together nicely and things are moving along on it at a great deal of speed.  Lynn really has a knack for this! 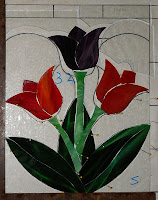 Mary Grace is wrapping the pieces of her Welcome Window and will tack it together before she starts cutting the glass for her letters which spell the word 'Welcome' along the bottom of the window.  I still love the shading on her flowerpot/watering can. 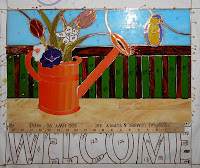 Susan R has most of her Summer (not Spring as I sated last week!) sign cut out and ground and does it ever look great.  she's done a fantastic job with this and I can't wait to see it completed.   BTW, the design of this window is all hers-- it was assembled from different summer items that she liked and then combined. 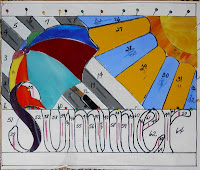 Shelley started this Boat window that her boyfriend, Chad, has designed and Shelley got a nice chunk of it cut out before she left.  Shelley plans on finishing this project at home where she'll work on it with Chad as a group project.  She'll be working on a rose window next week but Shelley says that we'll get to see the boat again when it's completed.

Martha's almost ready for her background to be cut and although I said that we were going to recommend confetti glass for the background it turns out that I was wrong (how shocking!)  It's actually Grafitti glass that we sold Martha on.  It wouldn't matter what she picks for her background though because this is going to look great regardless.  Background glass choices are important but not as important as one might first think because the viewers focus will be on on the subject matter and not the background glass itself.

This week also saw Brenda assembling her Beveled Transom window by wrapping all of her beveled pieces.  She's also gotten it tacked together.   Due to size restrictions she's omitted the top and bottom sections of this cluster because it just won't fit in the opening if we include them.  You can see where they would go because I've pointed them out with red arrows in the picture.  Once the beveled inner border surrounds this bevel you'll never know that it's been altered.

Tasha has started her newest Mirror and it will be larger than the hand mirrors that she's made, but with smaller pieces!   Because of that I have no doubt that it's going to be stunning when it's completed.   Remember, you get out of a project what you put into it.  Tasha's pattern is all cut out and she'll begun cutting glass for this when she returns. 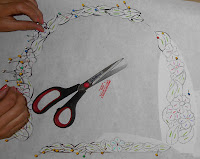 Paula has decided to go a little smaller with her latest project by making a University of Louisiana Box.   But she isn't going to make just one of these-- she's making 7 of them.   And best of all, there is going to be a secret compartment in the bottom of each of these as well.  My mind is racing with ideas for this and I think we're going to come up with something very unique. Although I don't have a picture of the pattern I do have the images we traced out to make the pattern. 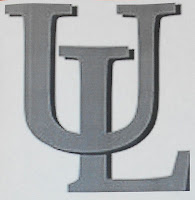 And there you have it.  Everything that happened in classes during the second week of August.  Come back next week and I'll show you a great way to store your foil as well as a ton of finished windows!