We've been having issues again concerning what foil you should use on your windows if you aren't going to color them copper when you are finished.  I've found that seeing the explanation in writing helps a lot (especially while it was written out or board in the shop.)   Now that it's been erased and been replaced with a new tip I've decided to post the rules for using foil here on the blog. 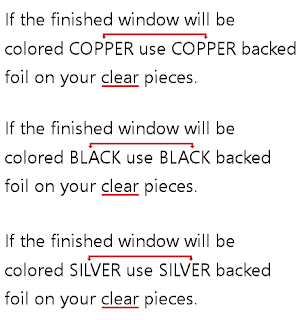 It sounds confusing when I rattle it off to students but when you see it in print it's far easier to see that only clear glass is affected and that copper matches copper,  black matches black, and silver matches silver.  Here's hoping that this helps, but if you are still unsure then just talk with me BEFORE you wrap your clear pieces!


With that out of the way I'm pleased to say that Sheri completed her Cochon The Pig Window and it turned out wonderfully.  She's going to write in the different cuts of meat from the pig on the glass with a paint pen but I believe the point of this window is fairly clear.  One of our students said that she thought this would go well in a butcher shop rather than a house and that's exactly the point here. 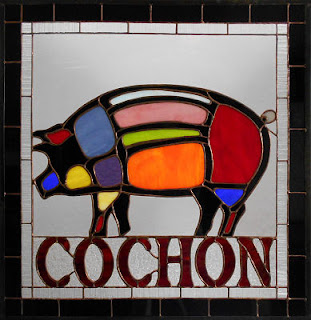 Susan R completed her Pineapple Welcome window and if you know where she lives you might already see it in its stand in her front yard.   She'll be working on a wonderful Spring scene when she returns next week complete with an umbrella and a sun. 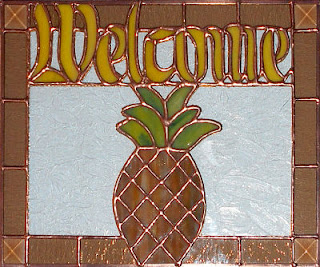 Tasha's Circular Fleur De Lis Window is completed and when our other students saw the size of the pattern they were all shocked at just how small it is.  This was an exercise in cutting small pieces as exactly as possible and Tashia did wonderfully with it. 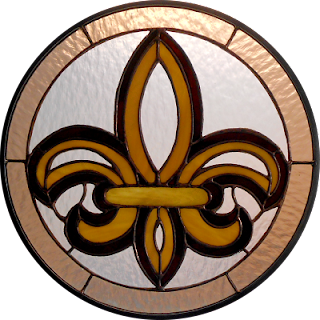 Linda L finished her Initial B Window and the colors really make this stand out nicely. She did beautiful work throughout this and is getting ready to tackle a large Fleur De Lis when she comes back in. 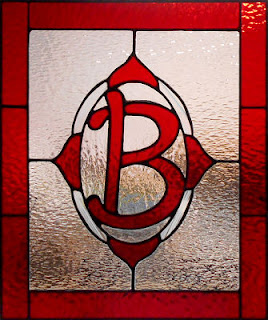 Jeannette completed her striking yet simple beveled window that she started just last week.  There's no pattern to follow when you make a window like this, she just traced around the bevel with some color and then cut the bevel and border into a rectangle of background glass.  She finished it off with the same color that she traced the bevel in and this is what she walked out the door with.  Perfection. 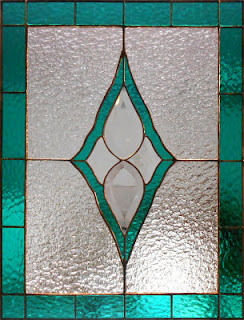 Carol's large Fleur De Lis Window came in needing only two hooks to finish it off.  They were added in less than five minutes and the window looks perfect to me.    Another great job by Carol. 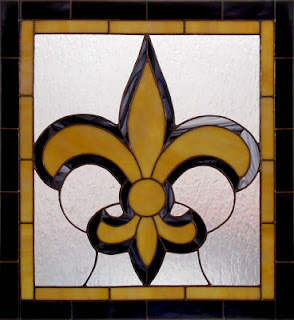 Becky S's Eagle and American Flag Window has its double border attached and she hopes to find the time to solder the back side while she's at home during the week.  I love the blue baroque glass that she used for her border.  Sadly, we won't be seeing much more of this glass now that Spectrum has closed down. 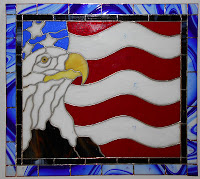 Bonnie's Female Cardinal Window is moving along nicely as she has most of it ground at this point. She still has some background to cut but there's not a lot of that in this window so cutting those few remaining pieces shouldn't slow Bonnie down much at all.  And let's not forget that she already has her round border cut! 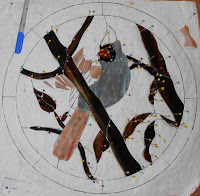 Barbara H learned how to trace out a central figure onto a single piece of glass and then cut everything from that one piece.  This method ensures that you spend as little time at the grinder as possible and that the grain of the glass flows perfectly throughout the window.  This is not only cut out but ground as well! 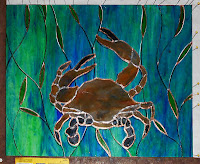 Carol started this large Peacock Suncatcher while she was in class and she's making good progress on it already.  This has always been one of my favorite designs and Carol's rendition of it doesn't change my mind about it one bit.

Myrt's Mermaid is taking shape and her leaves and background will soon be cut out now that the majority of the mermaid itself has been ground.   There's only one or two pieces of hair left to grind on this so Myrt will be moving along to her other colors when she comes back in.

Charlie's American Flag Window now has its background all cut out and ground and he's picked such a perfect border color that I even recommended it to someone else the next day!  Charlie will begin soldering this using the 'every other line approach' perhaps as early as next week. 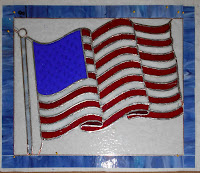 Terry has the bulk of her work on this oval Flower Window completed so the end is certainly near on this piece.  Terry excels in flowers and this Gladiolus Window was another of her own creations.   Way to go Terry!

Cindy worked on her Christmas Bell Suncatcher as well as a large Candy Cane.  She's been hammering out the suncatchers and I know she's got a lot more coming out over the next few weeks.  To me though, her Silhouettes of a wedding couple is her standout project this week.  I honestly  didn't think it was going to work well at all and I was completely wrong about it because this looks great! 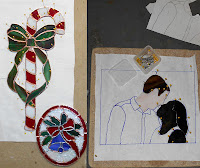 Jan's Basketball Window has its front side completely soldered which means that she'll flip this over and work on the back side when she returns.  Look to see this completed not next week but during the following week because even though she'll complete the window when she returns she'll still need to wash, color and wax it.  On a window this size that could take a while.

Jeanne is now working on cutting out her clear scrap glass sections which will be covered with foil and then with lead.   This is going to be one very striking window and it's already close to being completed.  As an added bonus Jeanne has made sure that you can see the correct eyes in their rightful places this week. 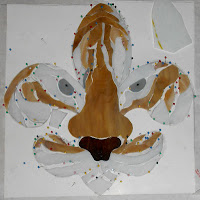 Here's Sheri's next project, a Dragonfly Window.  She's got the dragonfly cut into the background glass and you can see the filigree that she is using for the windows very clearly in this picture.  You can also see a test run for the words that she'll be printing on her completed Pig Window. 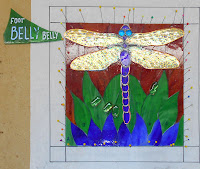 Mary Grace has almost all of the picture section of her Welcome Window ground now and it's looking like a winner to me.  It won't be long before this is tacked together and she begins cutting out her letter section. 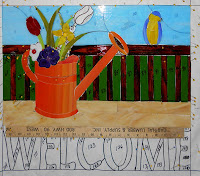 Our second Mermaid belongs to Lara and she's made great progress on this.  With everything but the small bubbles cut out she's begun grinding all of her pieces.   Next week she'll tackle the hair and then the worst part will be behind her. 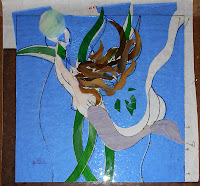 Jeannette filled in the broken pice of her Heron Window and will surely be adding a border to it when she comes back in.  She moved quickly and efficiently on this project and I can already say that she did a great job with it. 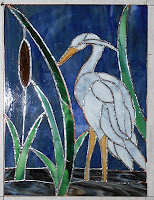 Linda F had actually left her window here in the shop last week so I could have taken a picture of it after all.  I'm just so used to her taking her window home with her each week that I never thought to look under the table for it when I noticed I didn't have a picture.  That said, she's got the grinding on this pretty much in the bag now and will most likely begin wrapping this soon. 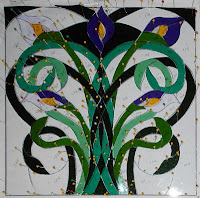 Our second Eagle and American Flag Window belongs to Roxanne and she's got this all wrapped and ready to be tacked together.  I've recommended using the same color for her border that Charlie used in his and so far she agrees that it's a good choice.  We'll see what happens with the border when she returns to us next week. 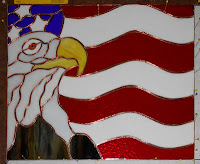 Betty's Angel Window has it's border attached and she's ready to tackle the soldering on this project.  When it comes back in next week we'll get a brass channel around the outer edge of the window and then add some hooks. 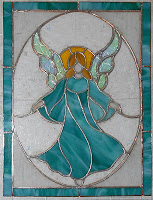 Rowena is working on a large Cross Window and has the center portion of the window tacked together.  She's also picked a border and has that all cut out so we'll see what it looks like with a border attached to it real soon now. 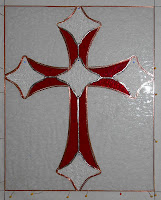 Martha is still wrapping her Seafood window but did she ever get a lot accomplished this week.  It won't be long before she tacks this together and starts cutting the (confetti glass) background that we're going to talk her into using.  Sometimes the best choices are the ones made for you!

And lastly we look at three more Snowmen Suncatchers that were made by Betty this week.  She certainly appears to be working in full Christmas mode!  She even painted all of their faces herself making these very impressive indeed. 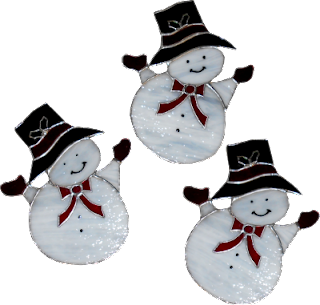 And there you have it.   Everything that happened in all of our classes last week has officially been documented and saved here on the internet for posterity (unless Goggle shuts down our Blog!)