Two Snakes On a Lamb's Tail

Rinse Out Your Mop and Bucket!

Something that many people forget about while grinding glass is that the water you rinse off your glass pieces with should be clean.  It's amazing how filthy it can get just within a half hour of grinding.  I re-fill my wash basin every 45 minutes or so while I'm working.  Once you see the bottom is covered with glass it's time to dump it out and refill it.  And even more importantly, I rinse out the sponge behind my grinder head every hour or so as well.  It collects a lot of glass and once it's filled with glass particles it can't carry much water to the grinding head causing the head to wear out quickly which slows you down while you are grinding.

Okay, so Linda F finished her Stylized Calla Lily Window and had no problem at all getting everything to fit since she had ALL of her pieces cut out before she started grinding.  Cutting our background after everything else is wrapped and tacked is a hindrance unless your center subject is a a solid piece surrounded by background.  In this instance Linda handled things perfectly. 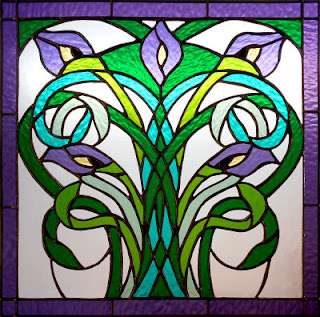 Terry's Gladiolus Window was completed this week and it's stunning.   Oval  designs are always beautiful but they involve a special attention to detail to get those edge pieces all lined up perfectly. Since there isn't any channel surrounding an oval window any inconsistencies are front and center.  As you can see, Terry had no problems at all. 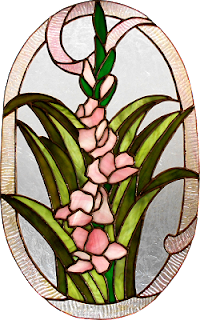 She shoots, she scores!!! Jan's Basketball Window was officially completed this week and Jan learned the joys of soldering a large window that's been wrapped with quarter inch foil.   With all the work on this behind her Jan has decided to make another window similar in size but split into  two separate windows.  The nice part is that the pattern lends itself to this design approach perfectly.  We'll see just what that is when Jan begin working on it next week. 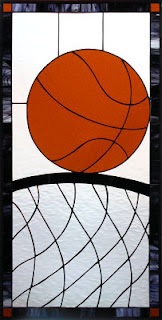 Rowena has finished her Cross Window which is very hard to miss due to the vibrant red that she used.  Matching the border perfectly to the cross was truly the best way to go on this. 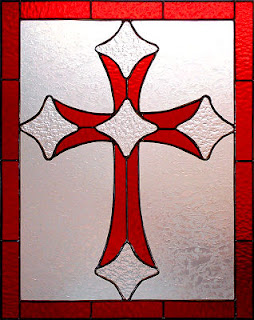 Here's a look at Carol's version of the small Peacock Window.  I've always been partial to this design and Carol's rendition of it is beautiful. 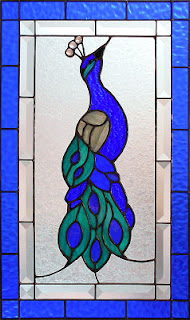 Brenda got a handful of bevels wrapped for the three piece Transom window she's working on but she still doesn't have the final measurements that these windows need to be.  We may just see Brenda starting work on something else until she gets a final size for this project. 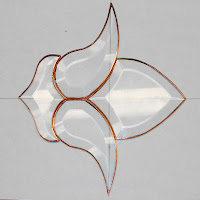 This week we saw Bonnie cut out the background glass for her Cardinal Window.  Once that was done she got all of those pieces and ground as well.   She's currently working on wrapping all of those pieces in copper foil.  Her border is already cut out and only needs to be ground but she won't be able to do that until the center section is tacked together. 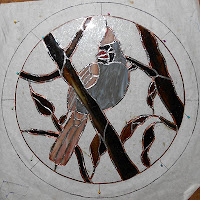 Shelley surprised me and continued working on her Boat Window.  As a group effort she and Chad have done some wonderful work on this together.  Since it is completely ground she's working on foiling it now and has taken it home to hopefully get some wrapping done during the week.

Cindy is making excellent progress on her silhouette wedding window and it's almost ready to be soldered at this point. The only thing left to do is to skim her final border pieces on the grinder and then wrap it, tack it, and do the final solder job on it.  She's also working on this familiar Fleur De Lis Window as Well and is just about ready to get borders cut for it as well.

Lara got the hair of her mermaid looking far less tangled than it did last week.Once everything fit together she  picked out some glass globs to use as bubbles in her underwater scene.  She's got them ground into place and is now wrapping this up by wrapping her pieces which means that the rest of this window should go very smoothly for her. 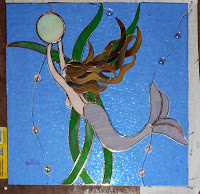 Jeannette worked on getting her Heron Window soldered and as of this week has the front side completed.  She hopes she can get the back side finished when she comes back in and somethings tells me that she  most surely will.

Lynn finished grinding the pieces in her Tulip Window and began foiling her pieces without being over zealous at all.  This week she learned that grinding is a series of steps involving the constant pinning and unpinning of your pieces over and over.  Once you get the basics down it's very repetitive but also very easy to fall into a groove and stick with it. 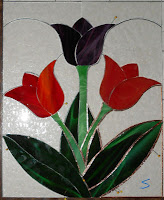 Mary Grace is busy as can be wrapping the pieces for the picture section of her Welcome Window.   She's re-designing flowers which has slowed her down a bit but so for now she will leave the flowers she doesn't like out of the window.   Once everything else is tacked together she'll draw out new petals and grind everything to fit in the empty spaces  she's left open. 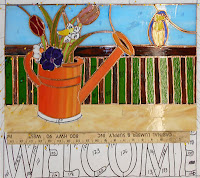 Susan R just needs the background of the letter section cut out before she starts soldering this.  I've also recommended that she  tack the top section first to ensure that she maintains the straight line that dives the letters from the top umbrella and sunshine scene. 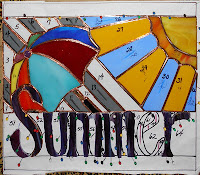 Linda L has all of the clear pieces cut and ground which will form the leaded sections of her Fleur De Lis Window.  She's also begun wrapping those pieces in foil which involves covering the top and bottom sides of the glass with foil as well as the edges.  You can see that Linda has already wrapped a few of her clear pieces already.  What you can't see is the amount of clear glass that she has already ground  and fitted together.

Jeanne's begun wrapping her tiger window which, as our frequent readers know, incorporates leaded areas just like Linda L's Fleur De Lis-- just on a smaller scale,  It's all coming together now and once this is tacked together the rest will be a piece of cake. 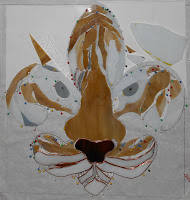 Ann assembled the Fleur De Lis Section of her FDL window and then worked out the borders for the rest of this window.  I hadn't realized that it was going to be as large as it is so we had to make a new pattern in order to see the new proportions of the window.  As you can see,  the background didn't quite fit on one piece of glass so after these pieces are tacked together Ann will fill in the bottom two pieces and then begin cutting and assembling her triple border. 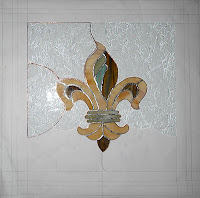 Roxane is so close to finishing her Eagle and Flag Window that I can already imagine how great it's going to look.  The front side is almost completely soldered so it won't take much time at all to complete the back side.  In fact, there's a GREAT chance that we'll see this completed when Roxane returns. 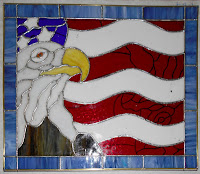 Sheri continued working on her Dragonfly Window and is very close to completing it.   She's got her final border ground, wrapped and tacked and has taken it home to solder there.   I'm sure she would have gotten a lot  completed but I found her soldering iron in the shop the next day.  And as I was typing this Sheri called and asked if she could drop by and pick it up.  I guess this window will be completed next week after all. 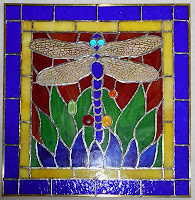 Susan D finished another 3D Butterfly and also started working on a Dragonfly as well. This dragonfly is all ground and ready for solder so we'll most likely see that completed when she returns next week.

And Carol's latest Butterfly is as flawless as her others.   What I love most about this is that Carol assembled this in 3D all on her own. Now that she can make these in her sleep she's moving on to another 3D design-- a Sunflower Lawn Ornament. 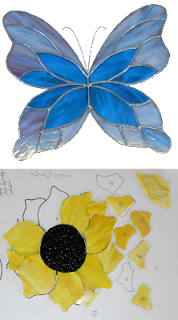 Myrt worked on retracing her pattern of the mermaid because she's extended it's length from the original design.   When she started this she didn't have the completed size for us to draw the window to, but she knew the mermaid would fit in it and used that part of the pattern for her central figure.  Now that she has the mermaid part completed she's made the pattern pieces for the rest of this window which she'll begin cutting when she comes back in to class.

And lastly, Becky S worked on a Chicken Body this week that was actually a repair.  To show you what she worked on would only make you wonder what she was doing because the body of the chicken was a separate stained glass entity from the rest of the bird.  Rest assured that it turned out looking a little indistinguishable (wow, that's a tough word to spell!) but wonderful nonetheless.  Next week she'll be working on a cat window.