They're All Charming People


Your soldering iron is a tool that does a lot more than just melt lead-- it also plays a big part in how smooth and rounded your bead is as well.  All of our students know that they should keep the tip of their iron clean but you should also pay attention to any build up that occurs on the shaft of the iron as well.   The red arrow below points to the spot that everyone cleans regularly but the blue arrow points to the most neglected part of the iron.   When (not IF) you see crust forming at the point where the tip meets the barrel you need to clean it off immediately.  A quick drag across a damp sponge won't do the trick here.  Instead, grip the crusty substance with your Breaker/Grosier Pliers and lightly rotate the iron while holding the pliers still.   Removing this crust will help keep your iron hot and more importantly, prevent your tip from burning up on you.

Also, never forget to unplug your iron if you won't be using it for over a minute.   This alone will add months to the life of your soldering iron.

So, WOW!  Linda L's Fleur De Lis is completed and it looks absolutely incredible!  It was certainly her attention to detail from start to finish that made this turn out so beautifully.  I'd put this along side the one I made any day.   Linda has never been afraid to tackle a challenging project and I can honestly say that she learned a lot while making this.  Her talents just keep on growing. 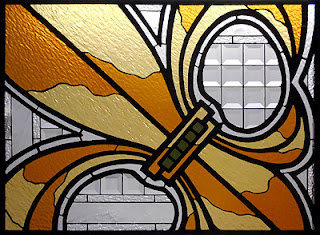 This is Paula's latest Keepsake Box and the irregular curved front made this one a little different and a whole lot more whimsical!   All in all it's another top notch job by Paula. 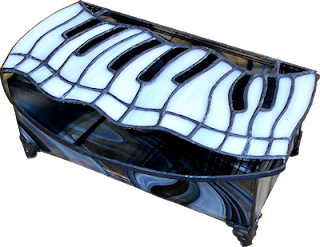 Terry's Cypress Tree Window was completed before I really got to say anything about it while it was under construction.   She also did an amazing job and this is a pattern that I'm sure we'll see used again.  I love it! 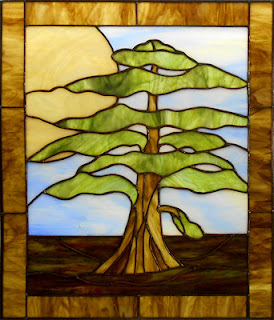 But Terry didn't stop with her Cypress Tree Window-- she also made this variation of the Jesus Fish Cross as well. 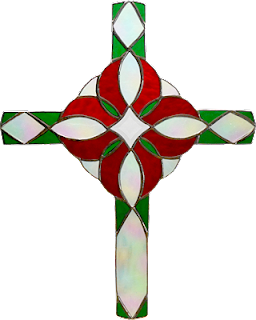 And this is the first of Susan D's Christmas Tree Lawn Ornaments.  As you can see it fits together perfectly.  She's got one more in the works and I know we'll see that completed when she comes back in. 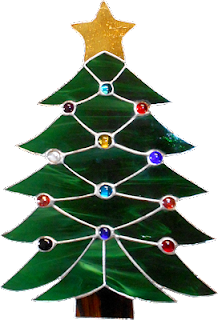 Brenda completed her Beveled Transom Window and she even sent me a picture of it as it was being installed.   To both the left and right of it peeking out from behind the curtains you can see two other windows that she will begin working on after the new year.  You have to admit that beveled transoms really add elegance to a house. 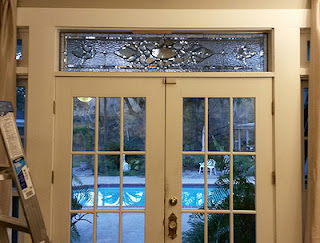 Cindy sent me a picture of these three suncatchers that she was working on while she was at home this week.   More beautiful work from another talented student for sure. 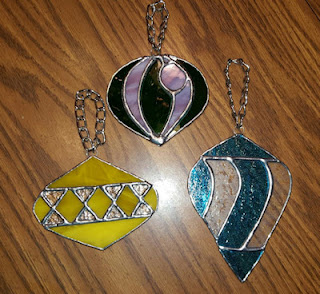 Becky is about ready to add the background glass to her Tulips Window and it is coming together beautifully.  I see no reason why the background won't be cut and ground when she comes back in.  Becky plans on adding a clear border to finish this off and then she'll begin soldering. 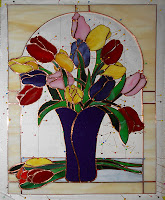 Carol's newest window is a Beveled Fleur De Lis that we've seen done before but the twist to this one is that she's added a colored trim around the Fleur De Lis that matches the final border of the window.  It's certainly stunning! 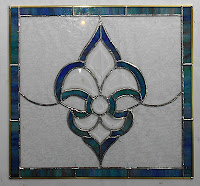 Our next Fleur De Lis is not just a fleur de lis, it's a tiger's head as well.   Jeanne finished soldering the front side of this while she was in class this past week which leaves her with just the back side to go.  Jeanne may very well wrap this project up when she comes back in. 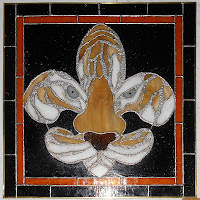 This Tree Of Life Window by Lynn M is fast becoming a favorite design of mine.  The leaves were made entirely out of scrap glass and the color coordination was done by luck of the draw.   That's right-- she'd pick a few pieces and then pick a random color to use with them.   The end result is this wonderful window which is now three quarters ground.   She'll be foiling this before we know it! 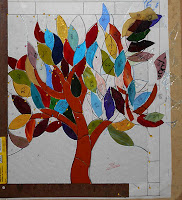 Lara's African Woman window was all tacked together and got its channel attached at the beginning of class.   Then she managed to get the front side of this completely soldered as well.  This is another window that will surely be a done deal next week. 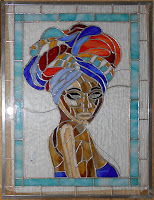 Here our latest look at Betty's version of the Fleur De Lis Window.   She's using the same pattern that Linda L and I had used but she's changed the colors ever so slightly.  Most of the Fleur De Lis is ground and wrapped which means that Betty will begin working on the inner clear pieces that trace along the FDL.  Once those are completed she'll be able to start cutting her bevels and then add the final three borders to this. 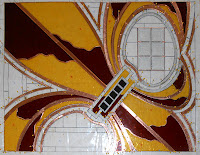 Paula's newest box is a Rose Bud design which she made the bottom for while she was in class this week.   She's got one week of classes left and two boxes to go which I suspect she'll easily get together before Christmas arrives.  Look to see them completed when we return next week. 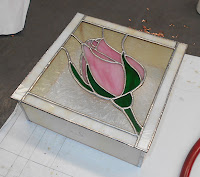 Then there's Tasha who cut out this Owl Suncatcher in record time and even got a lot of it ground as well.   You can't see the pieces that make up the eyes yet but there was a trick to cutting them out that we'll discuss further in weeks to come. 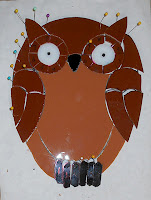 We're at the home stretch now because Sheri's Peacock Window is almost all cut out.   There are still a few filler pieces left to go for the background but once that's done she'll add some channel to this and then get soldering.  The end is near!

Shelley had forgotten the pattern pieces for her Three Legged Cat Window so she started working on this wonderful Glass Glob Tree.   She's picked out the color scheme she'll be using and has ground of of the globs so the foil will stick to them.   Since there are only actually six pieces of glass to cut in this window Shelley may very well finish it in record time.

Mary Grace started her second 'A' Window and went with a red color scheme on this one.  She's got one more left to go after this and that one will be yellow.  There's also a good chance that we'll see that started when she comes back into class. 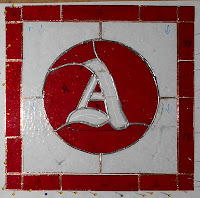 Here are Martha's thirteen Christmas Suncatchers all soldered and ready for hooks and halo's.  We also have an Angel head to repair when she comes back in but for all intents and purposes these are done! 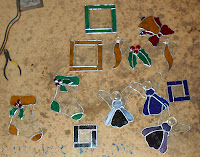 Brenda is ready to solder her Christmas Bells Window and she would have had her Candy Cane completed but at the last minute we found a broken piece and she had left the glass for it at home.  Much like Martha's projects we're going to consider these a done deal as well. 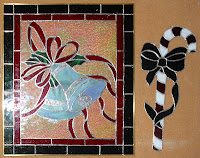 Susan R has made a hop from Christmas to Easter all in the span of one short week.   Now that her Christmas Ornaments have been completed she's decided to look ahead to the near future and start preparing for Easter.  She got this Bunny Lawn Ornament all cut out and ground in just one class and if you look closely you can see that a lot of it is wrapped as well.  Now that's what I call progress! 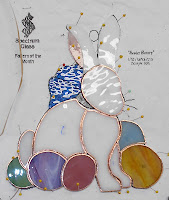 Terry's got an 'A' Window of her own started and she got the border cut out for it while she was in class.   She also has her window repair just about repaired as you can easily see below.   There's only the back side left to solder and then it can go back to its owner. 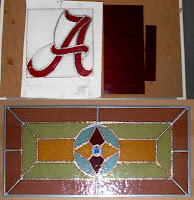 Now that Linda L has her Fleur De Lis Window completed she's ready to move along to something a little easier and less stressful.  This Santa Mickey seems to fit the bill!   Look to see some glass cut for this when Linda returns next week. 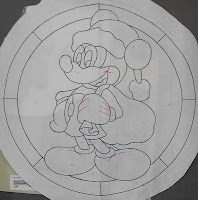 And that's it this week.  We have a lot of Windows about to be completed so next weeks post may be filled with finish projects!