Sometimes a window will contain identical pieces which is especially true in geometrically designed windows.  Although the pieces look the same they will not fit together correctly unless they are assembled in the same way that they were ground.   To prevent these similar pieces from getting mixed up  you should always number them with a permanent marker.  The only problem is that the numbers WILL rub off while you are handling (foiling) the glass which can lead to confusion later on.   To make your numbers more permanent simply cover them with some scotch tape.  Just be sure to fold one end of the tape onto itself to form a tab for easy removal (failure to do this will certainly make you want to pull your hair out!)  We'll see Jeannette use this trick later on in this post and we'll explain exactly why she did it .

Okay then, don't you agree that Becky S's newest Double Sunflower Window turned out absolutely beautiful?   Her attention to detail is top notch and the pale smoke border against her clear glass background allows the sunflowers to be viewed in their most vibrant perspective. 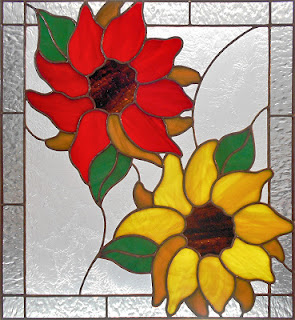 Terry completed her Daylily Panel and the oval border that it resides in will show up again a little later.  Terry designed this window herself and other students are already asking about the pattern.  Terry understands the concept of carefully placing your pattern pieces on the glass to incorporate the grain of the glass into the design.   This is especially apparent in the flower petal at the 7 and 8 position-- just look at how the grain of the glass forms the center vein of a petal perfectly as does the petal on the top left.  Beautiful.

Next up, Jeannette made this Abstract Window out of scrap pieces that she had around the house along with  two teardrop bevels.  Windows like these are a wonderful way to free up some space in your workshop as well as honing your skills.  Jeannette assembled this quickly and efficiently and needed no help at all to turn out this wonderful piece of art. 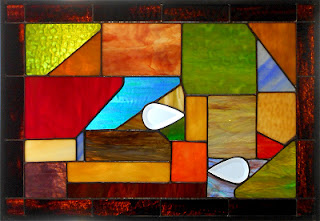 And speaking of scrap glass, that's what this next finished project by Bonnie used as well.   Perfectly fitting pieces and flawless soldering make this a beautiful suncatcher any way you look at it. 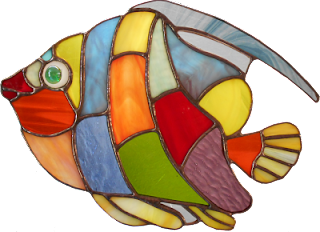 Mary Grace put the finishing touches on her Easter Basket Panel and I find that she's working a lot more at home now.  Having the bow emerge up and out of the border gives this panel a larger than life feel and allowed her to make the subject matter bigger without increasing the overall size of the panel. 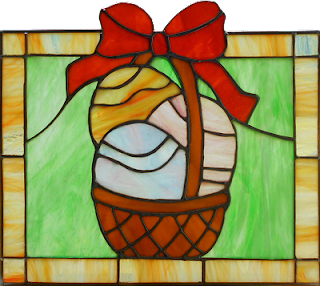 You know that Betty loves this Christmas Bells Window and this time around she decided to let the iridised glass that she used for the bells show up on the front of the window rather than on the back side like she normally does.  You can see a faint mother-of-pearl look in the glass that makes up the bells and it's a great effect. 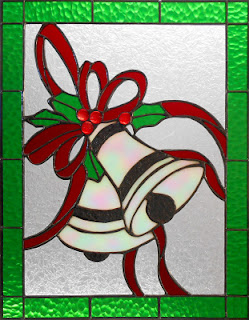 Cindy's latest Hand Mirror is another of her own designs and if our students keep up at this rate they soon won't be needing me to do patterns for them. 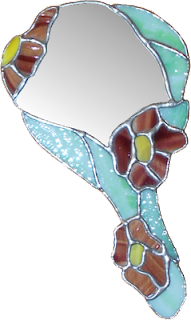 The last of our completed projects this week are a set of four Crosses that Terry made.  She has these down to a science now but she's also told me that she's officially all crossed out. 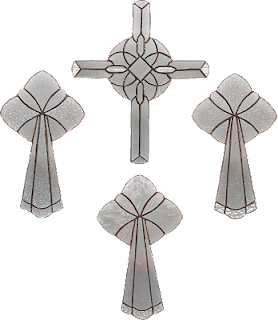 Remember when I said that we'd see the oval border design from Terry's Daylily again?  Well, here it is framing out Brenda's Iris window.  And it's only fitting that Brenda would be the one to 're-use' it because Terry is her sister and it just shows how similar their tastes run.

Judy's Seafood De Lis is MUCH larger than you might suspect and this week we saw Judy get the remaining pieces of her background cut, ground and attached.   Next up she'll be working on a double border although at this point in time she's a little unsure of what the colors will be. We'll see what she decides when we return in a few days with our next post.

Cindy not only finished her Hand Mirror but began working on a new Geometric Suncatcher.  It will be larger than a standard suncatcher due to the amount of pieces that make it up but it's still not an easy pattern to make-- unless you're Cindy. 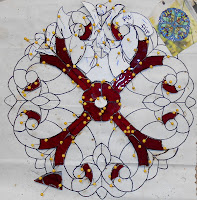 Our newest student Melissa now has all of the glass cut for her Stylized Fleur De Lis Window and she's even begun the grinding process.   She's moving along at a nice pace without sacrificing quality which is what everyone should strive for first and foremost. 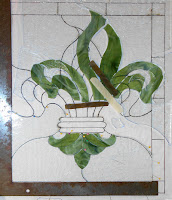 Linda F is wrapping her Dragonflies and Waterlilies Window.   She's actually missing three small pieces but it will be far more efficient to trace out those missing pieces after she tacks all of this together.   On a window this size, with this many pieces, it's easy to misplace some glass here and there.   Trust me when I say that this is the best way to handle this situation.

Lara came in with her Scales of Justice pieces all wrapped so the first thing she did when she walked in the door was to tack it all together.   Once that was done she cut a piece of brown glass into a 13 x 13 inch square and then set the scale on top to trace around.  This pattern lends itself perfectly for this method of cutting and before the night was through Lara had the background all cut, ground, wrapped and tacked!  Look to see a border get attached to this when Lara returns. 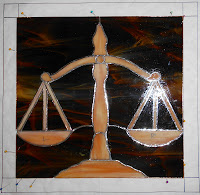 Myrt has all of the subject of her Humming Bird and Fuchsia Window all cut out and she has a lot of it ground as well.   Once she has this tacked together she'll cut the background the same way that Lara did with her window-- by tracing the glass pieces on top of a sheet of glass the exact size of the background.  It makes the final pieces fit together quickly with minimal grinding required. 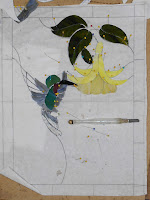 I've always loved this Mermaid Suncatcher and Susan R is doing a great job on bringing this one to life.   She's only got three more pieces left to cut and grind before she can start soldering this project.   Once the soldering starts she'll certainly finish this quickly. 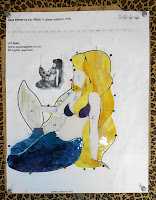 Jeannette started these three cabinet inserts after she completed her Abstract Window and boy did she get a lot completed.   Everything has been ground and she's taking these 20 pieces of  green glass home with her to wrap.   You can see that she used the scotch tape trick to keep her numbers on her pieces which are VERY easy to mix up since so many of them are repeated throughout these three windows.  The two bottom windows are easily mixed up so she used numbers on one of the panels and letters for the second one.   When she took these home to wrap all of the pieces went into one container for easy packing.  When she returns we'll know exactly where each piece should go to reassemble this perfect fit. 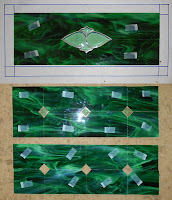 This week Ann decided to take a break from the grinding of her Fancy Fleur De Lis Window.  By wrapped all the pieces in her four corners she was able to continue working on her project while breaking up the monotony of the grinding process.  Now that the corners are wrapped she'll resume grinding the center section next week. 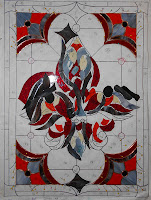 I have to hand it to Linda L-- she isn't going to take a break until all of these Welcome Windows are completed!   The pieces are small and plentiful which means that the stress level while making these can get a little high but Linda is soldiering onward and is almost finished with all of the grinding on these three windows.  Amazing.

And in wrapping things up we take a look at Betty's latest Double Sunflower Window.   There's only the border left to go on this and then Betty will move along to her next project.

I have to confess that these events actually occurred two weeks ago.  Now that you're at the end of this post I'm only one week behind so expect a second post to come out before this week is over with.  Once we're caught up with our regular classes I will bring you up to date on what happened with out latest Fusing Workshop that Mary Grace and Tina attended 2 weeks ago.  See you soon!

Posted by Bayou Salé GlassWorks at 11:26 AM