Students are finding that our favorite marker for tracing pattern pieces onto  glass is becoming harder and harder to find.  Walmart used to carry them but they don't seem to anymore.  However, the biggest question is which Sharpie Marker do we recommend?   The answer is simple: Sharpie Ultra Fine Points.  Black works OK but we've all found that the blue colored Ultra Fine Points are the ones that work the best.  Any other color is practically worthless so stick to blue (or black if you can't find the blue ones.)

(Buy Them Here At Amazon)

Ok then. Susan D has practically caused a three alarm fire with her Fireman Window which she completed this week.  The borders really tie in with the central theme and help bring this fireman to life.   Beautiful work all across the board makes this an impressive window indeed. 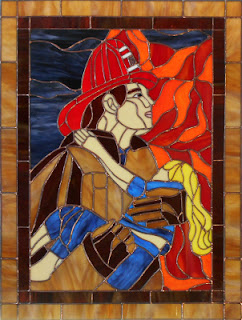 Terry completed her latest Butterfly Window in record time. True, she works a on her projects a great deal while she is at home but she always manages to accomplish an incredible amount in class as well. This was a commissioned piece for her and I'm sure that her customer will be thrilled to receive it. 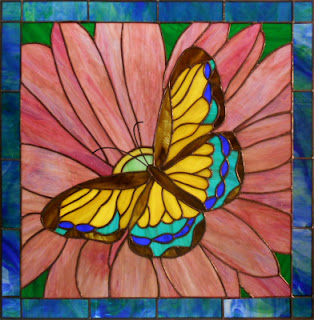 Brenda' Oval in a Rectangle Iris Window was finished this week and it's stunning.  The corner accents that she came up with really help sell the rectangalization of this project.  As always, her soldering is nothing short of masterful.   I love it when someone accomplishes so much without any help or guidance from me. 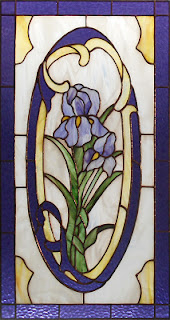 Well then, Sheri completed her Frog Suncatcher (which turned out perfect) this week and then moved along to her next project-- The Crane.   She has a lot of her colors picked out and she'll be ready to start cutting glass when she comes back in. 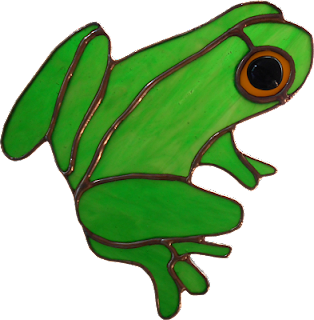 Cindy's small round Geometric Panel was yet another piece that was completed this week and it's a stunning design to say the least.   Everything just clicks with this window from the colors to the fitting of the pieces.  Beautiful. 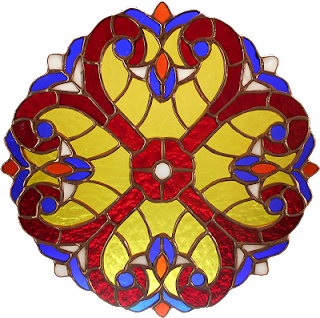 Linda L has finished her last two Welcome Windows and her penmanship is off the charts!  Somebody else is already talking about possibly making one of these but in a larger size.  All I know is that they won't be able to top the work that Linda did on the three of these that she's made. 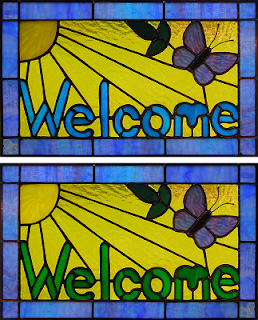 Jeanne has put the finishing touches on her latest Butterfly Lawn Ornament and she says she likes this one the best.  Next week she'll be traveling down a familiar street as she begins to cut out a few Bee Lawn Ornaments.  I have no doubt that she'll have fun putting them together because it will involve something new--curved wings and a curved body. 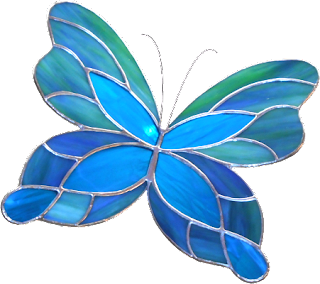 Carol's got two more lawn ornaments under her belt, a Sunflower and a Butterfly (that I didn't get a picture of).  She practically puts these together in her sleep now! 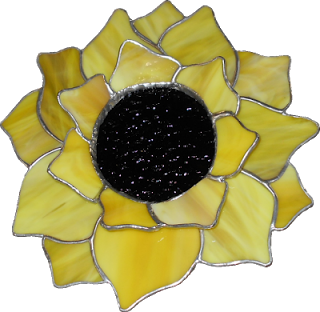 Jeannette began working on a large duck window this week and made an incredible amount of progress on it.  What astounded me was how precise her cutting was when compared to how quickly she got all of those pieces cut out.   This is wonderful work indeed. 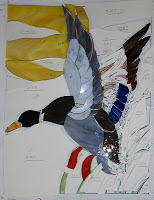 Brenda has started a new Stylized Fleur De Lis Window and was loved Melissa's opened centers so much that Brenda will be doing the same with hers. 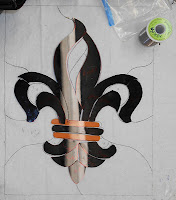 Melissa  started her Semper Fi (US Marine Corps)Window and due to the red glass crunch that's happening in the stained glass industry we focused on getting the largest pieces of red cut out first.   With the toughest cut behind her the road ahead looks like it will be pretty smooth from here on out.

Becky S has got another pair of birds cut out for her Birds on a Wire Window and as you can see, precision cutting is what Becky is all about.   You can also see the box of scrap glass that Becky is using.  We don't like to waste things in the shop and projects utilizing scrap glass are becoming more and more popular. 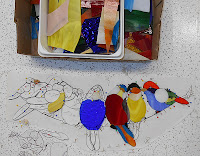 Paula's Wedding Box is soooo very close to being completed.   She got the hollow part of her hinge attached to the box top and then got it washed, colored, washed again and waxed.   Next the box bottom was made by taking its measurements directly from the box top itself.   With the bottom all tacked together and soldered Paula plans to touch up and color while at home   That means that these two pieces will be joined together with a hinge rod next week. 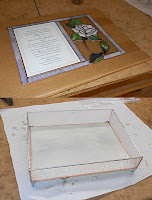 Linda L has flipped her Dragonfly and Water Lilies Window over after soldering the front side and is now working on putting lead on the second side.  When we flipped it around we got a chance to see it with some light behind it and it is spectacular.  I can't wait to show it to everyone else. 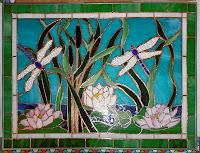 Rowena has all of her Clear Beveled Transom Window tacked together and she's well underway into soldering it.  With the front side completed and the back side started I'd say it's safe to say that this will be finished next week.

Roxane was back in class and she had her mind set on getting the remaining pieces of her Cardinal Window wrapped and tacked together.   And that's exactly what she did.   With her double border firmly tacked in place and her missing center piece filled in, Roxane will begin soldering this when she comes back. 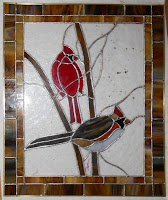 Tracey's Address Window is all tacked together now.   She came in with all of her pieces wrapped and after they were tacked into place she picked out her border color and an accent color for the six small squares in the longer sides of the border.   Tracey will be soldering next week!

Mary continued working on her Bird Window and she's moving at a nice even pace.   There are a lot of pieces in this but  once all the birds are cut out the rest will go much easier and quicker.  It's actually the color choices that make cutting out the birds so time consuming. 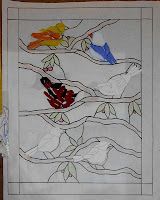 Susan R is busy cutting away at the glass for her Spring Scene Window which she has about halfway cut out.  She's moving quickly on what will surely be yet another wonderful window to decorate her home. 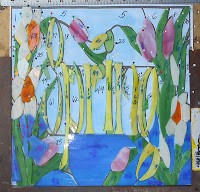 Judy has officially completed all of the soldering on her large Seafood Fleur De Lis Window and will start all of the washing, coloring and waxing on this when she returns next week.  I see no reason why this won't be completed when you come back to read our blog next week. 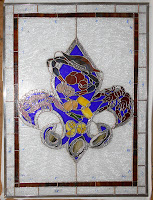 Ann now has all of her Fleur De Lis ground and ready for foiling.   Once this gets tacked together she will be able to start working on her grid work background.   That will go a little slowly because she'll be cutting out a section at a time and then tacking it together before moving along to the next section.   This prevents the glass from slipping and sliding out of place which would cause the grid work to shift out of alignment. 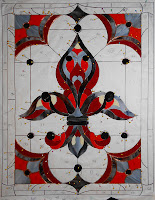 Martha now has three inner borders cut out for her three Fleur De Lis Windows but since they are all stacked on top of one another it only looks like one window.  Once these pieces are wrapped (they've already been ground) Martha will be able to tack them together and then get the final border cut for each of these.

Linda L not only completed her Welcome Windows, she also began a pair of Cardinals.   After she left and I looked at the picture I let her know that she should hold off on cutting out the beaks to these-- it sort of looks like a buzzard's beak to me.   We'll fix that easily when she returns. 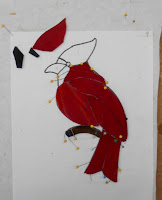 This week we also saw Shelley get all of her blues and greys cut out and ground for her Moonburst Window.  She also learned that you should never use paint markers on your glass because the marker needs to be scrubbed off of each piece of glass with steel wool before you can start wrapping. 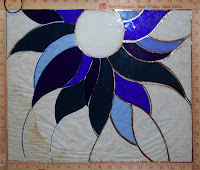 And in the end, Betty has two more Sunflower windows started and one of them is very near completion.  With just the back side to solder on the taller window Betty will surely have that one completed upon her return.

And that's it.  I forgot to post the link to last week's Blog on Facebook so now I'm three posts behind on there because I still have to post what happened in our fusing workshop  last month.  the good news is that it should be up in two more days since it is all written up now.   See you then!