Sometimes people say they want to make a suncatcher and then when it's put together they tell me that they want to put it in the center of a window.   Sometimes that's fine and dandy but there are more times than not that it can't easily be done because of design issues.   If you are a student and you want to put a project into a larger framework I need to know about it before you cut any glass at all so I can make adjustments to allow for surrounding glass.  Never assume that you can just add a background to a suncatcher because most times it isn't nearly that easy unless you want a lot of distracting lead lines running throughout the window.

Well now, I wish I got a better picture of Lara's Scales Of Justice Window but brown glass is incredibly hard to photograph in the shop at night when there's no natural light coming in the in the window.  This picture was taken with a flash which shows the flow of the brown glass but also causes a glarewhich reveals finger prints that are normally invisible.  Still, you can see just how wonderfully Lara did on this project.   She moved along quickly and efficiently on this project and I can surely say that Lara knows what she's doing in here. 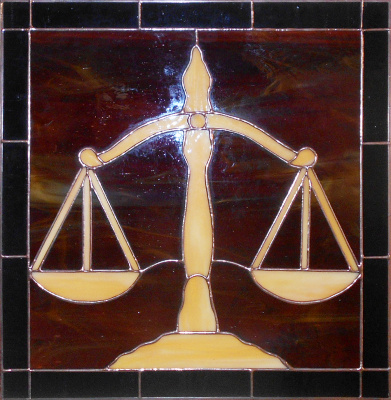 Carol's large Beveled Cross Suncatcher is absolutely gorgeous.   The glass that she used to border the bevels is a beautiful color that adds just the right amount of contrast. 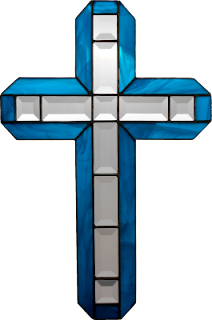 Susan R finished this wonderful Mermaid Suncatcher which has always been a favorite of mine.   I'm pretty sure I'll be cutting out one or two of these myself to have around for shows. 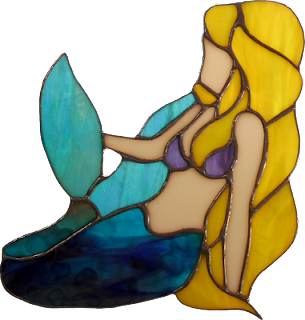 Paula's Broken Heart Suncatcher is simple enough but therein lies the beauty of this design.   You can't see the fancy soldering running down the center of this heart but it looks like stitches! 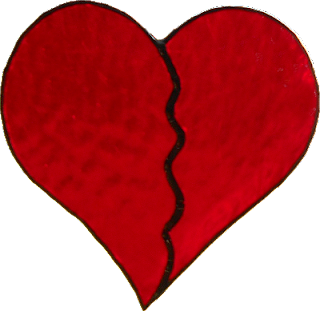 Carol also made these three Starburst designs and discovered the joys or working with identical pieces.   It's never as easy as it looks, but in the end she did a wonderful job on these. 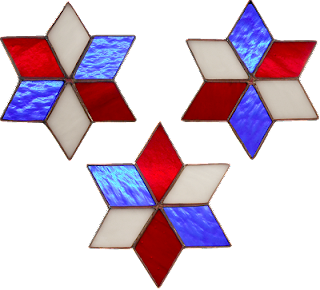 Mary Grace finished her Morning Glory Suncatcher and is officially ready to begin  new project.  The only problem is that I never took a picture of it.   I hung it up so that it was back lit, walked over to get the camera and got distracted I guess.   They say that the mind is the first thing to go but I think I recall it being a very beautiful suncatcher.

Linda F has all of her Dragonfly Window cut out, ground and wrapped.   She's picked out her border and we'll certainly get that attached when she returns to class.   That means that she only has some soldering to do before she can call this a completed project (and soldering won't take Linda long at all).

Tashia's Bowl of Hygieia Window is ready for solder already.  This week we saw her tack the center together and then get the border cut, ground, wrapped and tacked.   A little brass channel was added to protect the edges and Tasha then took it home with her so she could solder it during the week. 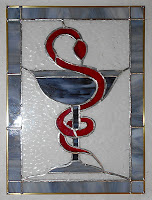 Carol had this Humming Bird and Rose all cut out when she came into class and then wrapped and tacked it together.   She then cut a clear textured piece of glass to fit the background and traced the bird and flower on top of it.   After a few quick cuts Carol was ready to begin grinding. 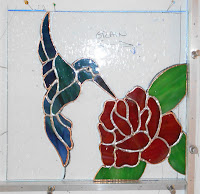 Brenda has her Oval  Irises all cut out and tacked together and now she's going to insert it into a rectangular background so she can square it off.  We've hit a small snag since the window isn't perfectly oval but we're making due and when this is completed no one will ever be the wiser except for you, me and the millions of other people that read this blog weekly. ;-)

Jeannette really made some incredible progress on her three inserts this week.   She got all of the center sections tacked together and then got all of the border pieces cut and ground as well.   And as if that weren't enough, she even has one of these completely wrapped!  Whew!

Melissa is our newest student but she's catching on to every step of the stained glass making process very quickly.  This week she resumed grinding her window and by the end of class she was wrapping it already.   I do believe that we'll see a border on this when Melissa returns next week. 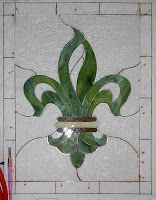 Judy  has officially cut the last piece of glass for her large Seafood De Lis Window.  She's taken the outer border pieces home with her to wrap so she'll be able to get this tacked together and then get a  zinc channel on the edges when she comes back in.   We're using zinc channel to help give this window some extra strength since it's so large.  A wooden frame will probably need to come into play because the background glass she picked is much heavier than most glass which makes the window stronger, but in turn puts more weight on the solder joints and channel. 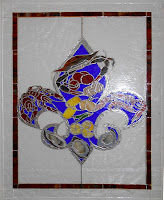 Linda L got all three of her Welcome Windows tacked together this week.  Since there are so many tiny pieces in this pattern some of them didn't fit back together correctly after the pieces were wrapped.  This is no big deal at all and is pretty much par for the course when working on a window with this many pieces.  What we do is leave out key pieces and then either re-grind them or re-cut them.   Once that's accomplished these will be perfect again.   Easy peasy.

Tracey has all of the glass cut out for her Address Numbers Window and will surely end up spending her next class in front of the grinder.    This is a nice sized window so grinding may take some time especially since there are a lot of straight lines involved.   If they aren't ground precisely the window will look messy and we can't have that!

Paula resumed work on her Wedding Box and she's got the flower portion of it cut out and ready to be ground.  Since this has a leaf extending beyond the border it's a little trick to grind but there IS a trick that we will be using to ensure a perfect fit.

This week Myrt continued working on her Fuchsia and Humming Bird Window.   With everything ground she's taken this home so she can come back with it all wrapped and ready to get it's background cut.   This is a window that has more background glass than subject matter which makes cutting the background from one piece the most practical way to finish this. 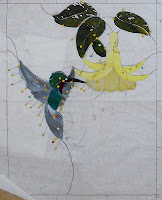 Susan D has really made progress on her Fireman Window and she's just about ready to tack it together.   there are a few pieces left to grind but the majority of this window is already wrapped.   Now that this is all fitting together it's easy to see that the fireman is carrying a little girl in his arms (which wasn't apparent to some people at first).  It's amazing how much clearer a window becomes once everything is in place.

Then there's Cindy who has her latest large suncatcher almost completed.   These Geometric Shapes do very well for her while she's displaying at various shows so she's always got one of two of them in the works.  This one is actually an order and she has a few colors that she's required to use but the customer is basically letting Cindy use her own judgement on where these colors will be placed in the pattern.  That means that this has no choice but to turn out great. 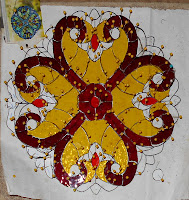 Martha has begun wrapping her three Fleur De Lis' and it looks like she's making good progress.  They all fit together beautifully but we're going to alter the pattern so it doesn't have those deep cuts for the next person who decides makes these.  That will make this project far easier to make. 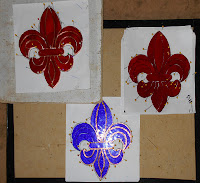 This may look a little familiar but this Beveled Cross is being made by Rowena who liked the colors on Carol's Cross so much that she decided to use the same glass to frame hers out.  With all the angles cut on her colored border pieces Rowena will surely have this completed when she returns and then she'll move on to her Transom Window.

Ann has started grinding the Fleur De Lis portion of her window and is working from the bottom up.  When grinding there is no right or wrong place to start, you just want to pick a spot and work onward from there picking a piece of glass that touches another piece that you've already ground.   This is really coming together now as you can plainly see. 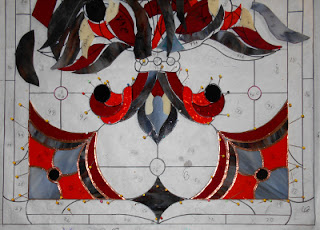 Sheri is in between projects so she started this Frog Suncatcher and got it all cut and ground.   Next week she'll have a pattern for a Crane Window that she wants to make so I'm unsure if we'll see this frog completed or not.  Time will tell. 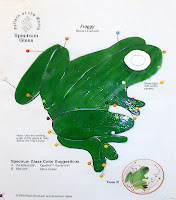 Shelley has all of her Sunburst Window tacked together and she's even begun soldering it as well.  She's taken it home with her where she hopes to finish the soldering so she can get a channel and some hooks attached to it next week.  I'm very sure that we'll see this completed when we see it again. 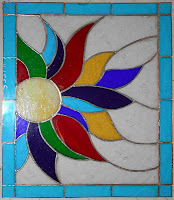 Bonnie started another Multi Colored Fish Suncatcher and got it all cut and ground during class.  She's taken this home to wrap and I have no doubt that she'll complete this when she returns next Tuesday. 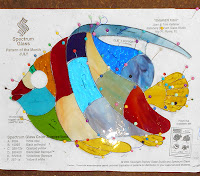 Becky S has started work on two Birds on a Wire Windows and she picked the one that I like best-- the one that curves.   This is another pattern that I really like and plan on making in the near future myself.  The little tiny eyes are a paint to cut out but the end result is always worth the extra work.

And to wrap things up I'll mention that Terry worked on a repair this week which took up most of her class time (but not all of it).   Before she left class she had begun drawing a Butterfly pattern which we'll get to see when she comes back in.  Also, we had Mary resume work on her surprise window that I can't post here.   Take my word for it when I say that  she's got it all ground and will be tacking it together when she returns next week.

So now we're up to date (as long as we don't count the Fusing Workshop that I will be covering next week) and we will be getting regular posts on Monday evenings from here on out.