A Plateau Is The Highest Form Of Flattery

Grain direction causes more panic amongst our students than any other part of stained glass.   People fret so much about it that they make things far harder than they need to be.   Most of it is plain common sense but there's one area that IS somewhat tricky and that is figuring out the direction of the grain on a flower or piece of cloth that has flipped over to reveal the opposite side.   In the picture below we can see the underside of the flower petal around its edge.  How do we determine how the grain should go? 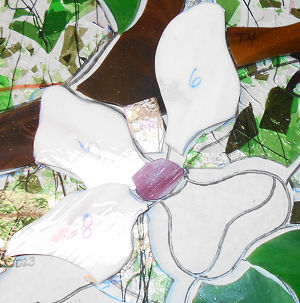 When in doubt trace out a rough drawing onto a piece of paper-- it doesn't have to be exact.   Mark the grain as you would normally mark it on both the front and the back of the piece of paper.   Then just simply fold the paper pattern the way the flipped edge of the petal is flipped.  The grain line on the under side of the paper pattern will now be on top and you can see how the ideal grain line should run.

Just remember that Stained Glass is about art not realism.   If the grain lines on the above example matched up perfectly I would twist the flip slightly to give the piece more contrast from the top of the petal.  It may not be 100% correct but art is all about appealing to the eye, more so than the brain.


Well now, we have a lot of completed projects this week so let's jump right on in with Tracey's Cardinal Window.   Double borders always set a window off nicely and Tracey picked a perfect color for her thin inner border.  We like to pick a color that matches the tiniest bit of something that was already used in the window but the green that Tracey had used in her leaves just wasn't working for this piece when we tried it for the thin border.  Instead Tracey went with a similar, but different red glass that has more than a a splash of orange in it to help set it off.  Had we used the same red that the cardinal was made from it would most likely have been over powering.  This, however, looks perfect to me! 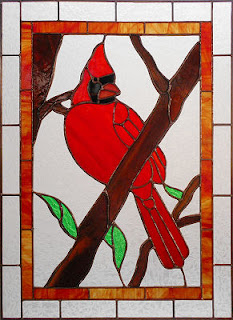 Here's Becky's first Birds On A Wire Panel that she finished complete with specialty hooks that you can see on both ends of the piece.  It took Becky just one night to solder both sides and the edging of this which is pretty impressive.  She's got a second one already cut out so she'll be working on another of these when she returns.

Jeannette completed her Curved Top Transom Window in record time.   Using an assortment of balanced colors in a geometric design, Jeannette practically threw this together at home all on her own.  She's saving the cardboard template that she had made to get this to fit the opening because there are a few more of these windows in the house and you just never know...

Carol's window started off being called the Running Shoes with Wings, but now that the name has been added there's just no better name for it than the Laney Window!   For some (obvious) reason I kept thinking of the Roman God Mercury while Carol was making it, but Carol made this all her own with her choice of colors and design. 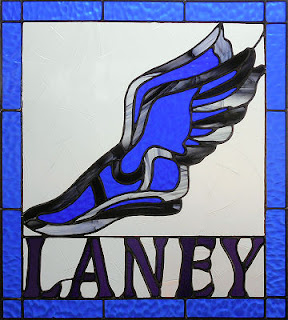 Carol also assembled this cute little Humming Bird Nightlight which is actually just barely bigger than the size of the picture that you see here.  It may be tiny but it certainly was complex to put together since each piece is balanced on the others with twisted wire that had to be curved just right to get everything to line up.  It certainly looks good, doesn't it? 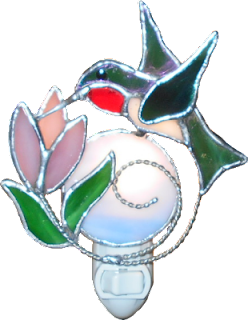 Next we have the first of Myrt's Peace Sunflowers.   The Peace Sign and Purple Leaves make me keep thinking about playing Jefferson Airplane's 'White Rabbit' while I look for a tie died shirt and some beads for the door.   It makes Myrt think of smoking other things but we aren't going there, right?  :-) 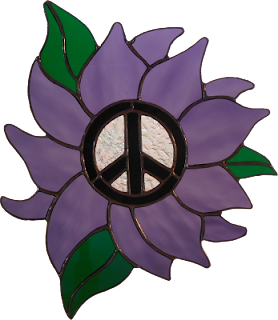 Rowena is the midst of making a Lawn Ornament menagerie and this week she completed an Elephant to go with the Lion Head that she made last week.   Look for more animals from Rowena as the weeks go by! 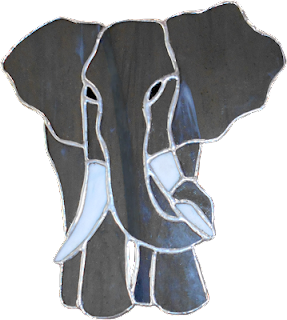 Jan's got a third Air Plant Holder made and its every bit as wonderful as her first two.   I tried photoshopping an air plant in the little spring holder but my end results were pitiful so what you see is what you get.   Jan's making a Wedding Box next and we'll see the top to that completed upon her return. 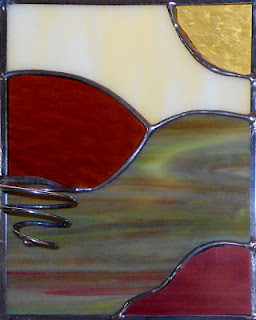 So, Jeannette not only got her Transom Window finished this week-- she also got this Multicolored Tropical Fish completed as well!  Now that's fast work! 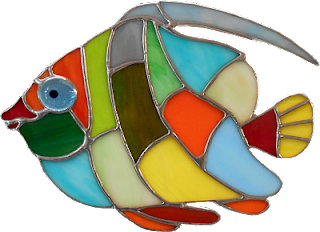 Terry's Caduseus Window is essentially completed after she spent the night soldering the front side.   She got her channel attached to the edges and even got her hooks on this before leaving class because she plans on soldering the back side while at home and then delivering this commissioned piece.  That means that we probably won't see this again but we can easily see already that it turned out beautifully. 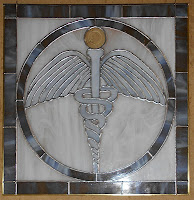 I have to say that Betty's Iris Window is a standout design.   Rather than being a flat, static flower scene this one flows and has a graceful movement about it.  Her use of subtly shaded colors will truly give this even more depth once you see it lit up.  I believe a double border is in order for this window and Betty agrees.

Here's Brenda's American Flag Window and as you can see, she's been grinding along on this nicely!  It's almost all in shape no which means that wrapping and soldering is just a step away. 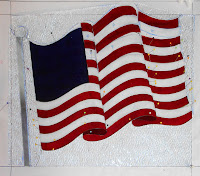 Tasha's Manolo Blahnik Window is coming together quickly.  She has all of her glass cut out and has already begun grinding.  This week Tasha learned the importance of cutting on the INSIDE of the lines that you trace onto your glass.   If you do this one simple step you will discover that rather making multiple trips back and forth to the grinder you can just skim your pieces for a nice fit on the first try.

Janelle was a Weekend Workshop Student just a few weeks ago and now she's a regular!   Since she's already made a window with us (which you'll see soon) we skipped the standard Butterfly Suncatcher that most new students make.   She's decided on this Pelican Window and in just one class she has the majority of it cut out!  Way to go!

Melissa's large Bird Window just needs the Birds cut out and then she'll be working on borders.  Since her borders have curved corners we can't use the strip cutter to cut them meaning that she'll have to cut the pieces out by hand.   All of this window, including the border, will be ground all at once.  Don't you love Melissa's choice of background glass?  It's called Fractures and Streamers and it ALWAYS makes a window look incredible. 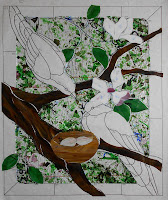 This is Bonnie's interpretation of Birds On A Wire and it's really taking shape now that all of the glass has been cut and two of the birds have been ground.  She has the rest of the birds separated into baggies (which you can see underneath the pattern) to keep everything together without mixing everything up.

Rowena also worked on her own version of the Mallard In Flight Window that Jeannette made just a few weeks ago.  This window is for her rather than someone else and all I can say is that from the looks of things Rowena is on the same flight path to success! 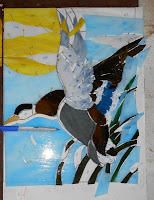 Shelley decided to make a simple Humming Bird with a flower this week and found exactly what she wanted in one of our pattern drawers.   She won't be adding the straight cuts along the bottom so her version will have a simple, plain background and that's the beauty of altering patterns. 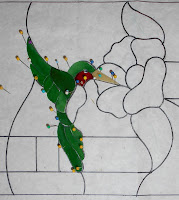 Now that Mary has all of her birds cut and ground she's begun the arduous task of wrapping all of these small pieces.   Still, the hardest part of this window is well behind her now so the rest should be relaxing and stress free--  Especially the soldering. 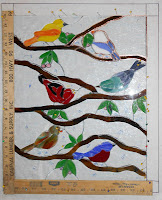 Guess what we have next?  Another bird window!  We certainly have a lot of them under construction but since Sheri has begun grinding her Crane Window that means that she's getting close to finishing it.  I especially like her use of pins as she grinds.  Pins are the key to getting your pieces fitting together correctly.  Trying to grind without pins is like trying to cook without spoons 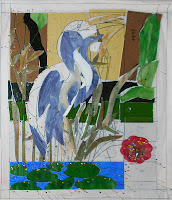 With two down and a third section all cut out, Cindy's six sided Panel Lamp is about at the halfway point.  I can't wait to see this tacked together. 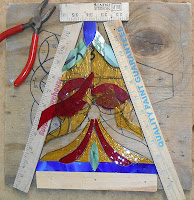 Then we have Linda F who has begun grinding her Flower Pots Window.  Although all of the flowers have been cut out she's considering changing some of the flower petals.   Myself, I think things are going to be just fine as they are but as I always say:  If you don't like the way something looks it probably won't look any better once it's completed so fix it while you still can.   We'll see what Linda decides to do when she returns.

Meanwhile Linda L has been hard at work on her Street Address Window.   With the center number section almost completely tacked together Linda will soon begin assembling the two end sections which will give this window its length.  Rather than working on a large board we're working on this window in three separate pieces so that it's easily transportable because once it's joined together it will have to stay in the shop to avoid breakage.

This is the back side of Barbara's Autumn Scene and Train Window and yes, some of this side has been soldered already.   I'm thinking that she'll be soldering during the next class and then adding the metal wires that will form the railroad trestle above all of these trees in two more weeks.

After missing two weeks of classes it was nice to see Ann back in action. This week she finished cutting, grinding, wrapping and tacking her final borders into place!   That means she'll be spending all of her time soldering this window when she returns.  And for the record, this window is larger than you think-- trust me on that. 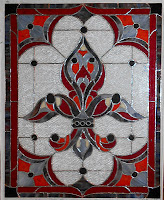 Susan R was as busy as can be cutting and grinding two more Rose Lawn Ornaments.   The pink one is completely ground and ready to be wrapped while the yellow rose is very close to being ready for some copper foil.  We'll most likely see that happen when she returns.

And Myrt has started a new Peace Sunflower, but this one has a completely different color scheme from her first one.   She's also moved at about twice the speed in getting this one cut out.  Great work! (I'm still hearing Jefferson Airplane when I look at this!) 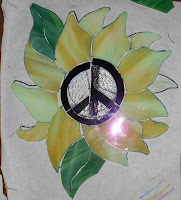 Finally, to wrap things up we take a look at Lara's newest pattern.   It's another African Woman scene and it looks to me like it will be every bit as stunning as all of the other pieces she's done with us.  I love how Lara looks outside of the box when choosing art for her windows.  The road less traveled leads to incredible results!

So that's it here.  Next up is Front Page News!