Put It In My Yeti

Your Glass Cutter is a delicate instrument and far smaller than you might actually think.   It's the Cutter Wheel that does all the work by scoring the glass as it rolls over your glass.  This wheel is positioned in a slot an the bottom of your cutter which one of the red arrows is pointing to in the picture on the lower left.   As time goes by this slot will likely fill with grit and dirt which can stop your Cutting Wheel from spinning freely.   In the picture on the bottom right you can see that the slot on my cutter is completely clogged and should be cleaned. 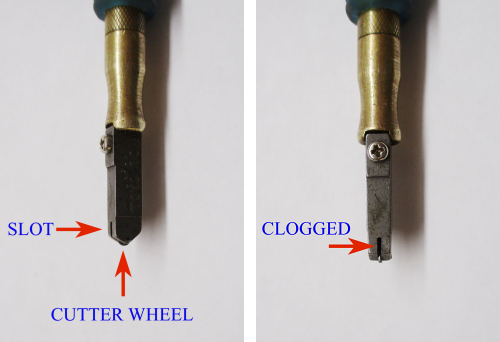 Cleaning your cutter is very simple and takes less than 5 seconds.  Just take one of the pins that you use to hold your glass pieces in place and gently push it into the slot to force out the grit and grime that has accumulated there.  It may take a few pokes to clean it out but when you've made a few passes with the pin you will hopefully be able to see through the slot as you can in the picture on the lower right.   If your cutter has a long oil wick you may not be able to see completely through the slot but you will see a lot of dirt and debris come out.   Taking care of your cutter is an important part of making stained glass windows because you will only ever be as good as your tools.   Also, remember to oil your cutter again after performing this procedure.  Just a drop on the cutting head will do. 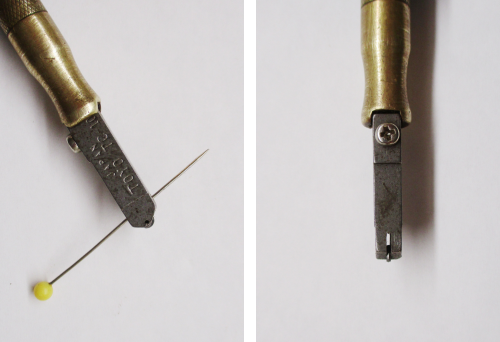 Lara's Ballerina Window is an extraordinary piece and one that I may very well make myself. (Imitation being the sincerest form of flattery!)  Lara's subtle use of iridized glass blends in wonderfully  with the green hues of the window while contrasting with the Ballerina herself to provide her definition.  Beautiful, beautiful work. 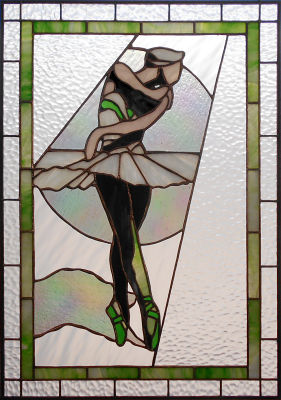 Cindy's latest Crab and Corn Tray was completed this week and she did another stellar job on it.  The claws and legs of the crab are weak points in this design so they are secured by a thick wire on the back side ensuring that they don't get bend off when someone reaches into the tray to grab (or add) something to it.  As for the corn, well Cindy made each cob from one piece of yellow glass and then cut a ragged checkerboard across it making for a perfect fit. The end result is corn on the cob! 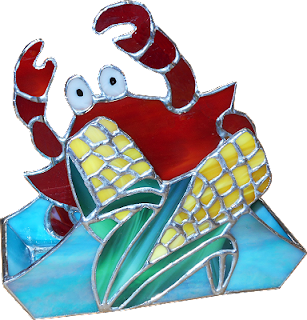 Rowena was as busy as can Bee knocking out three individual pieces including a brand new Butterfly design which she curved and then hung as a Suncatcher.   This is the first time the lion has been made by a student and her Bee was put together and soldered with the greatest of ease during class. 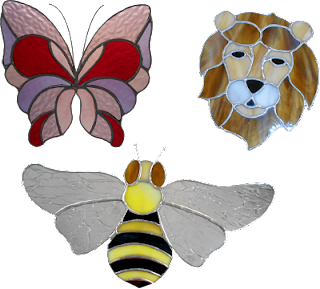 Tasha left with one Baby cut out last week and when she came in this week she had two Babies all ready for solder.   It didn't take long for her to complete the soldering and then move on to her next project which you'll see at the end of this post.   She surely did a great job on these babies. 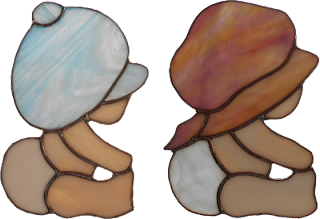 Susan R found this pattern on the internet and came in with her Red Rose all ready to be soldered.  The pattern (as you see it below) has a structural weak spot where the stem connects to the rose.   Since Susan mounted this on a stake to use as a Lawn Ornament it isn't a problem at all, but I am going to make adjustments to this pattern so she can make it into a suncatcher without having to worry about the stem pulling free. 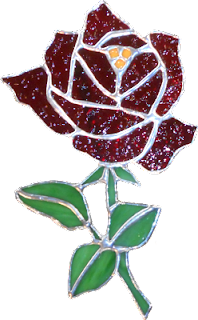 Linda F's Flowerpot Window is certainly moving along quickly.   She only has two more sets of flowers left to cut before she can start grinding all of these pieces.   Although you can't see it, all of the clear background has already been cut out.   This window is going much faster than I thought it would and that's a testament to Linda's abilities.

Next up we have Terry's Caduseus that she began last week.   She has all of the glass cut out and will certainly be assembling this when she returns. As a quick piece of trivia I will leave this tidbit here: It is especially common in the United States to find the Caduceus used as a symbol of medicine instead of the Rod of Asclepius (used most elsewhere).  The difference being that the Rod of Asclepius has only a single snake while the Caduseus has a pair of snakes entwined around the winged staff.) 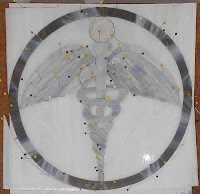 Brenda started a United States Flag this week and will be responsible a tip of the week when she gets this ground.   She has a plan to get stars on the blue portion of this flag and I can't wait to see how that turns out!  It's already looking might fine indeed. 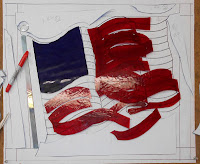 Martha may have been a bit laid back this week after arriving to class after having a root canal(!) but she was still able to get quite a lot accomplished.   The entire antler and ears section of her Deer Window is all ground and fitting together perfectly.   I must say that I was impressed considering how mellow and out of it she was during class.  She was beautiful, just not in those pictures she left on my camera... 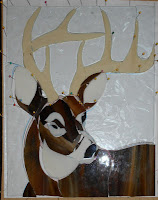 Melissa came in with her pattern all traced out, cut up and ready to be traced out onto glass.  And that's exactly what she did.   This week we saw her get her green leaves, brown branches, light brown nest, and speckled eggs cut out.   She's looking for a nice grey for the birds themselves and is contemplating a mix of glasses for the background.  We'll see how that all turns out next week but right now things are looking good. 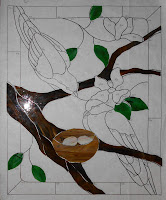 Wow, Linda V's Mickey Mouse Lamp has two complete panels cut out already!   True, the borders have only been cut into strips and still need to be sized but you can see the color scheme easily in the picture below.  And don't worry-- Mickey's eyes aren't going to be that spooky looking-- we just had those lying around and placed them on his eyes for fun.

Each week we see Mary move further and further upward on the grinding of her six Birds Window.   With four down and just two left to go she'll be wrapping this before you know it.   And I have to say that she's really doing a great job with the grinding.  Smaller pieces like these can be problematic but Mary is keeping a stiff upper lip as she soldiers on through all of these pieces. 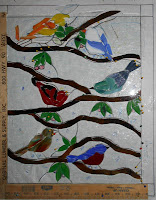 Sheri's Heron Window is so very close to being all cut out that it isn't even funny.   In fact, I think that she will begin grinding this when she comes back in next week.   There are a lot of pieces in this window and they add a modernistic flair to what would just be another stained glass heron window.  Looking good! 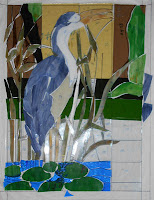 Tracey has the front side of her Cardinal Window all soldered and will be moving along to the back side of this when she comes back in.  Since she got the front finished in less than one class I think it's safe to say that this will be completed when we see it again. 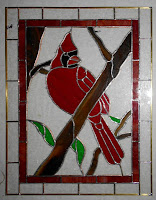 At first I thought I'd forgotten to take a picture of Myrt's Peace Sunflower.  I thought I heard her say that she was leaving it in the shop but when I looked on her board there was nothing there but the pattern.  Then, a few days later, I thought that I should look UNDER the pattern and lo and behold there it was!  Although she was hiding it from me I see now that the front side is completely soldered and the back side is ready to go! 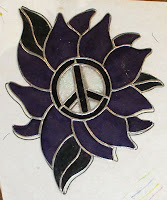 Susan R is making a few more of her Rose Lawn Ornaments and as you can see this one will be done in Yellow.   I altered the pattern a bit from her first one so that the flower has more graceful curves in it but I did that before realizing that there was a stability problem.  That means this pattern will have one more trip to the drawing board.   Susan plans on making these in different colors so expect to see a few more as the weeks go by here. 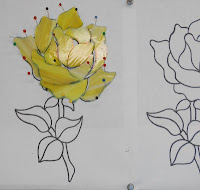 Next we check out Jeannette's colorful Geometric Transom Window which is also completely soldered on its front side.   There isn't very much left to solder on this so Jeannette is bringing the board to transport this home along with her next week because she plans on having this completed and out of the way!

Becky S isn't the only person making Birds On A Wire-- Bonnie is as well!  Bonnie tore through all of her glass cutting and has all seven of her Birds cut out and ready to be ground.  I took the picture as she was bagging things up so there are three birds missing but trust me, they are all ready to meet up with the grinding wheel!  I like how effortlessly Bonnie made her color choices.  In this design it's really best to just go with the flow and not spend too much time worrying about color.   This is a piece that to be constructed from scraps and that's exactly what Bonnie did.

Carol got the letters and background for the name all ground and fitted together for her Laney Track Window this week.  The front side is essentially soldered and that means that she'll be working on the back side for this when she returns.  I have to say that she's made short and accurate work of this window. 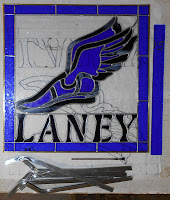 Barbara really impressed me with her soldering this week.  Although she says it's messy I beg to differ with her.  With the front side of her Autumn Train Window almost completely soldered she'll most likely move along to the back side when she returns.  After that it's all about wire work for a week or so and then the final train!

And here's Cindy's latest panel for her Lamp all tacked together.  Cindy completely understands the importance of having all of the pieces pushed outward against the wooden sides of the jig because if they aren't then each panel will be different and not line up when we join them all together to form the rounded lamp. 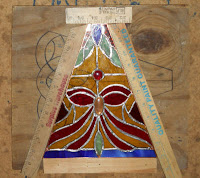 Lastly, Tasha is about to start a window with a cat next to a pair of legs in high heeled shoes.   It's hard to make out from the pattern below but I do believe that the shoes are Manolo Blahnik's.   Since they easily steal the spotlight from the cat I'm going to call this Tasha's Manolo Blahnik Window.  How elitist of me!

Somehow, I don't know how, Becky S's Birds On A Wire flew the coup yet again before I could get a picture of them.  That woman is very, very tricky if I do say so myself!

And that's it-- all there is that's fit to picture and print!