The Essence of Woman

Due to an Internet outage on our end we're about a week late here but rest assured we will catch up shortly.  We have a simple tip here that I honestly just discovered today that I want to share and it goes something like this:

Every once and a while you get a roll of foil that consistently tears and then splits from one of its edges.   It's a pain to deal with but most times the problem solves itself after a couple of yards of the foil have been used.   I hate to throw away foil so today I tried unraveling about 2 yards from the roll and then foiling my glass starting from the opposite side of the 2 yard length I cut from the roll.  Guess what?   No more splitting!  So the next time you get a defective roll of foil just unravel a few yards off the spool and resume wrapping your glass from the other end. Problem solved!

Okay then, Paula completed her latest Wedding Box which warmed our hearts, and then she broke our hearts  by telling us that she was going to sop attending weekly classes with us.   She certainly knows what she's doing and is one of our most capable students so I know that anything she makes at home on her own will be high quality pieces of art.   We're going to miss her but I know we'll be seeing her again because the joy of our classes is that it isn't about business-- it's about becoming friends.  No job can be better. 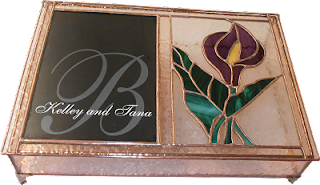 Brenda's latest Cross Window is another project that was entirely created at her home.   Brenda's skills are certainly a force to be reckoned with. 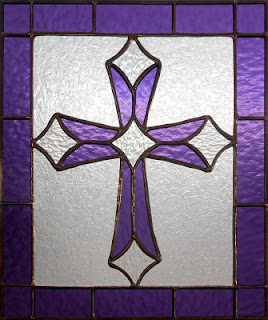 Susan D finished the 3D Butterfly that she had started last week and it's another winner.  All of the suncatchers that she's been making will go towards making her latest Garden Cornucopia which is moving along at a spectacular speed. 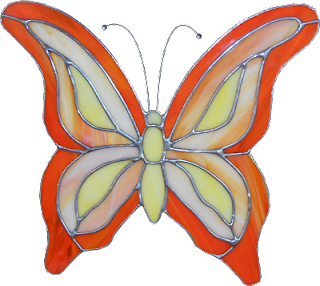 Rowena completed a beautiful rusty colored Sunflower Lawn Ornament this week as well as a clear textured version of the Multi Colored Fish that's become so popular lately.  Leave it to Rowena to put a new spin on things.  She has requested a copy of Linda F's Butterfly that we saw last week so you know we'll be seeing one of those made by her soon.   Rowena is the Lawn Ornament Queen and can practically make these with her hands tied behind her back.

Martha started a new project this week and it's a pattern I haven't seen made for a long time now.  This deer design has always made a beautiful window and I have no doubt that Martha's will be just as beautiful as each of the others were.   You can see she's already off to a GREAT start. 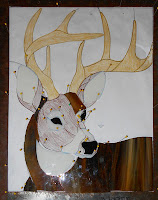 Betty cut all of the flowers for her Flowing Iris Window using two similar but different purple glasses.   The end results, though hard to see at this point, are stunning because as I always say, "The most striking results come about subtlety.

Then we have Tracey who finished cutting her Cardinal Window by getting the tree branches and all of the background glass cut out.  Once that was completed she moved on over to the grinder and began fitting all of her pieces together.  She's already made big grinding strides towards the completion of this window. 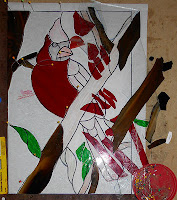 After finishing her 3D Butterfly Susan D cut and ground these three Flower Suncatchers and will be ready to tack them together and solder them before you can say, "That's another great job!" 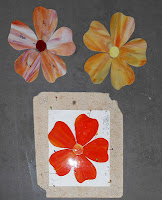 Sheri re-cut numerous pieces of her background glass and I think the change is easily for the better.   the background in this window shouldn't steal the focus away from the subject matter and the lighter hued colors that she's using now are a perfect compliment to the demure hues of her Crane. 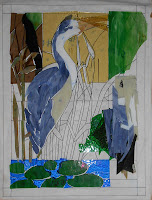 Lara has the actual Ballerina tacked together and now has all of her background glass cut out as well.   She spent the night hard at work grinding each of these pieces and her glass choices are, in my opinion, spot on.   Let's face it, she's making this window look easy!

Terry has more than a handle on her Heron Window that she began just one week ago.   With the front side completely soldered I think it's safe to say that she has this well under control and looking Mah-velous! 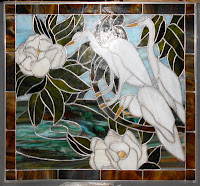 Myrt managed to get all of the peace sign cut out for the center round section of her Sunflower and then moved along to the flower petals themselves.  With the hardest part of this out of the way I think we'll see her wrapping this project up shortly. 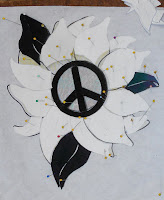 Cindy was back to work on her panel lamp and she's now got one section of it completely cut and ground.  With all the design changes worked out the rest should go far easier for her.   The first panel is always the toughest because it's where you work out all of the 'kinks' and Cinday has made sure that there are no longer any kinks in this design. 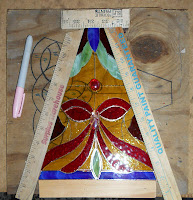 Jeannette got all of her Mallard Window tacked together which includes her border.  For that she's picked a dark green which will really look great once you see it lit up from behind.  Her channel was also attached this week and she's already got a good portion of this window soldered as well.  I know for a fact that we'll see this completed in our next post. 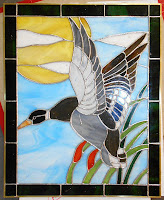 Bonnie worked on a new Butterfly design of her own design and picked a single sheet of multicolored glass to make it from.   Pattern placement is always very important and this butterfly shows just how many colors you can get from one small sheet of glass. Susan R has almost all of her pieces wrapped, but true to form things have expanded a bit.   That's not any fault of Susan's however, it's just par for the course when you wrap a window with as many pieces as this.   We're going to leave a few of the larger pieces unwrapped and then grind them to fit again after everything else is wrapped.   Look to see this tacked completely together when Susan returns. 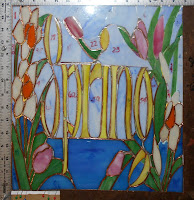 Barbara has been hard at work wrapping all of the pieces for her Autumn Train Scene and she's made a lot of progress.   She's decided to replace the pieces that she used grey glass for because she doesn't feel the effect she was going for worked.   Anyone who's willing to throw out pieces of glass to make their window look better gets a huge thumbs up from me because if the problem bothers you at this point in the windows life, it will certainly cause you to dislike the window when it is finished.

Brenda was also hard at work making Beveled Crosses this week.  This are as elegant as you can get and the Star Bevels really go a long way to making these come alive when seen in the sunlight.

Rowena also started a large Owl Suncatcher of her own this week.  With everything already tacked together I just know we'll see this completed when she returns.

Shelley continued working on her Fleur De Lis Window and got the actual FDL all ground and partially wrapped.   She's taken her background glass home with her to cut out during the week but I never got a picture of the Fleur De Lis actually tacked together.  Sadly, all I have to show you is this jumble of pieces. 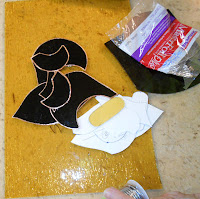 Jeanne  was in again this week and got all of the pieces for her pair of Bumble Bee Lawn Ornaments wrapped which means that next week she'll learn how to assemble these with 3 different curved sections.  Let the fun begin!

Next up we take a look at the Wooden Shark decoration that Martha picked up last week.  She thought it would look better with the mouth filled in with red glass and I have to say that she was 100% correct on that assumption.  This might make a nice suncatcher if I can figure out how cut the teeth into place without filling it with lead lines. 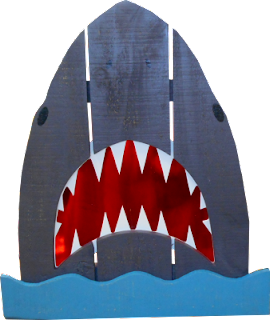 Lastly, Becky S is very close to having the first of her Birds on a Wire Window all ground.  She's got plenty of the second one cut out as well and she agrees with me that this project is more demanding than you first think it would be.  If I'd remembered to take a picture you'd see why but I guess that will have to wait until next week.

So there you have it, a bit late but still timely nonetheless.  Everyone have a great week-- we'll be returning with a new update before you know it!