When making geometric designs it's possible to 'simplify' things by looking for repeating patterns.   Although the pattern below has 48 pieces in it, you only need to cut out pattern pieces for 12 of them and then just cut each piece 4 times.

Can you figure out how to do this window with even less pattern pieces and more repeats?   It's possible, but there IS a trick to it which we will reveal in our post next week.

So, first up this week we take a look at Linda L's completed Easter Mickey Mouse Window.  Her use of pastels along with a matching iridised background glass really make this window stand out.  Her work is flawless and there's no mistaking who this cartoon character is even though he's covered almost entirely by a bunny suit! 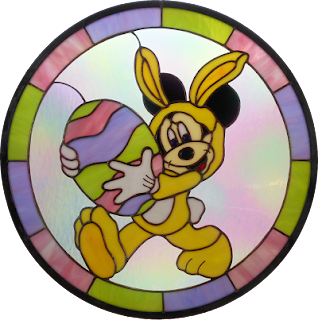 Angie came in and put the finishing touches on her Compass Rose Window which is far larger than you ever might imagine when you look at this picture.  It's nearly 36 inches wide and so big that it wouldn't fin in the sink to wash it!  I have to say that Angie's work is always improving and this window proves it. 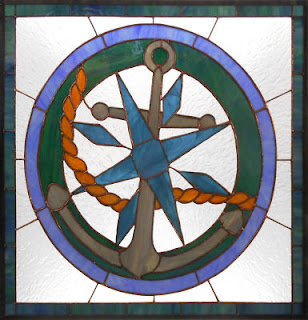 Barbara's Beveled Turtle window  is splendid indeed.  She did a great job soldering it and the assorted clear glasses and bevels really give this an air of elegance.  Wonderful indeed! 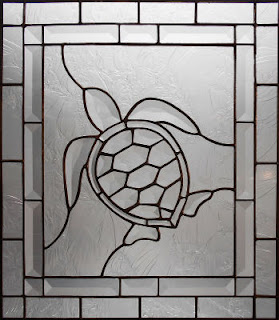 Lara's newest Project is a Tribal Headdress replete with colorful feathers.  Although it looks like a bunch of lines now, it will soon transform into a wonderful feather window! 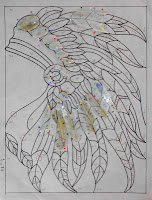 Terry resumed work on her geometric window but not before she repaired a window that she she made a long, long time ago.  This window is a perfect example of a pattern that can be done by repeating one section numerous times.  It's something we'll go over in more detail in the weeks to come.

Mary began cutting glass for her Dream Catcher Window and what a phenomenal job she's doing!  I remember when cutting glass was intimidating for her but know she just traces out her pieces and gets to work.  As you can see, she's cutting so nicely that you can't even tell that the circle section is almost entirely cut out. 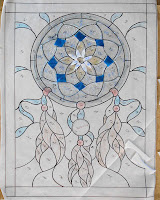 MiMi is our newest student and her first window is a Bull inside of the letter 'O' which is resting atop the flag of Spain (I think!)  She's already got the majority of this cut out and for a foirst window I think that's amazing work!

This week we also saw Tracey get her glass all picked out where upon she then began cutting it.  With the flowers and the leaves cut out I'm pretty sure she'll move along to the red cardinal next.

Rowena's Sunflower is looking rather incredible.  I love this design largely because of the overlapping yellow flower petals.  They lend this window a very distinctive look and Rowena has all of her pieces flowing perfectly.

Susan R  made great progress on her Mardi Gras Mask Panel and is now ready to begin cutting out her background glass.  Although the background consists of a lot of small triangular pieces I'm sure she'll get them cut, ground, and attached in time to get her border cut out when she returns next week.

Shelley got her multi-colored border all cut out and decided on each of the angles by flipping a coin.  Heads meant she cut the angle from left to right and tails meant that she would cut it from right to left.  This method prevented her from spending two or three wasted minutes trying to decide which way the cut should run.  Nothing slows down production as much as indecision. 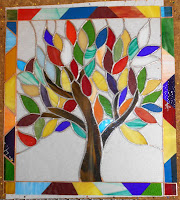 Bonnie has all of the glass cut for her Three Ladies Window and has begun the grinding process.   Grinding is something that she has no problems with so she should be able to get this ready for foil very soon. 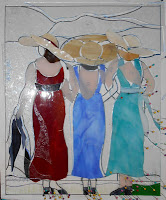 Mary Grace got all of the center section of her 'B' Window tacked together and is now cutting out the border glass for it.  With two sides fitted in place she has only one side left to go.  She'll begin soldering this next week for sure. 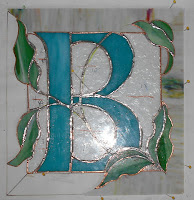 Melissa's center circle of her Geometric Circular Window is all ground and fitting together nicely.  She's got everything pinned into place and is now adding 16 small accent pieces to break up the monotony of the center section.   This is another window that is being made by repeating one section over and over and we'll look at exactly how she's doing this in the weeks to come. 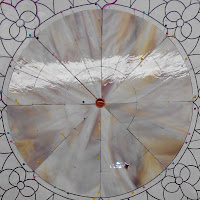 Although you can't see it at all, Becky S now has her background all cut out for her Peacock Window.  Actually there were two small pieces that rest between the head dress and the peacock's head that we had to sacrifice to be able to cut her background out of one piece of glass but they'll easily be replaced when she comes back in.  Next week you'll see at least the first border attached and you'll be able to get a good feel for what this is going to look like when it's completed.

Brenda spent her night worked on wrapping all of the straight line bevels for her pair of transom Windows that we'll get a good look at next week.  There were just under 50 bevels in all and she's about set to start putting that first Transom together now.

And we're winding things down here by looking at at the new window that Sheri has started this week.  It's a stained glass rendition of a Tabasco Coffee Mug that she owns which has always caught her eye.  Once she finishes it she'll be able to see it it in a much larger format. 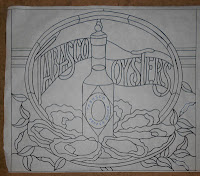 As a final note I want to say that Cindy has been MIA in action here in our updates but she's been in class.  She's just been working on another lamp repair which she should be completing soon.  Once that's done she'll get busy on a new project which we'll follow week by week.