Cutter maintenance is really very simple involving just two steps.  1) Just roll your cutter's head through a drop of oil before you start class and 2) remember to clean the slot that the cutting wheel resides in by inserting a pin every few weeks.   When I first posted this tip everyone was upset that I hadn't mentioned it earlier but this week I ran into two student cutters that were jammed solid.

The slot above the cutting wheel is where all the oil accumulates trapping with it bits of glass, dust and other grime.  Once you've cleaned the slot out with a pin run the wheel through a drop of oil and you're all set!


First up in our completed projects this week we look at Lara's Starry Night Window.  I must say that all her work has paid off handsomely.   Based on Vincent Van Gogh's painting, Lara has put her own twist on a very famous and classic design.  As flawless as her workmanship is, I must say that her soldering is really the high point of this window. 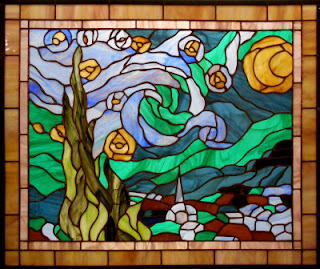 This week also saw Rowena finish her Bird Of Paradise Window.   Look at the way the leaf that runs behind the flower lines up perfectly even though its view is obstructed.   That's one of the hardest things to teach because people often look at their window piece by piece rather than as a big picture.  Yet Rowena does it with ease as is clearly evident. 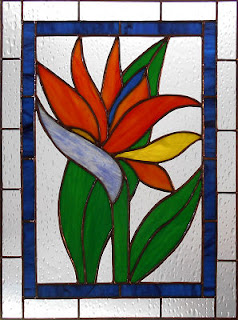 Then we have Sheri who altered our standard Peacock Pattern and then really made it her own by adding a specialized border to it.  The end result is perfect and now she's moving along to a project with even more pieces. 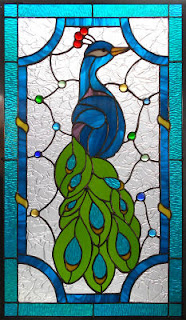 The pattern for Terry's latest Flowing Angel Suncatcher has been tweaked each time she remakes it and this one looks even better than her last one did.  Red hair on an Angel?  Most people would go with blonde but this proves that until you actually see it, you just don't know what you might be missing out on. 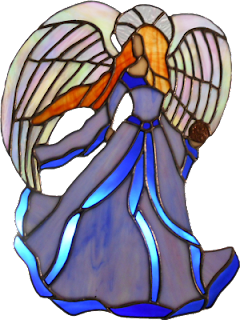 Terry also began work on this Geometric design which will be the topic of our tip in the beginning of the next update.   By the time that gets posted we may very well see the majority of this completed.

Beth has started working on a new window this week and it's going to be an Address Window for her front yard.   She has a nice sturdy metal frame that this will be mounted in when it's finished so this window will be good and safe out in the elements.  She's moving along at a nice pace and doing wonderfully with her cutting.  I think she'll begin grinding this when she comes back in because she wont cut the text portion out until after the top section is tacked together. Our second Geometric Window is being made by Melissa.  As you can see there are a lot of repeats around the edges of this design but the work will surely go smoothly.  Melissa plans on tacking together the center circular section before getting into the harder outside edges so that the center section doesn't shift  while she's getting things on the outside to fit.  But before she tacks this she'll be adding a few amber accent pieces which you'll see next week.  They'll be small but very noticable. 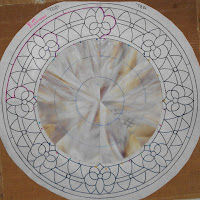 Barbara H wanted to make a simple beveled Turtle Window and then she decided to add a beveled border to it to 'spice it up' a bit.  While she was working on the background she decided to angle the turtle which made all the difference in the world on this design.   I like it! 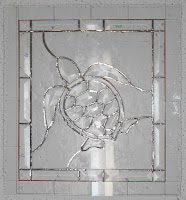 Rowena loved this Sunflower design and just had to make one for herself.  I completely understand the attraction because I want to make one of these also.   What you see below is the sum of one class worth of cutting.   That's what I call making excellent time!

Susan R's Mardi Gras Mask Panel is all cut out and just about ready to get a background attached.  She'll tack this together before cutting her background pieces for the very same reason that Melissa is tacking her window together-- to ensure that everything stays lined up as we add more pieces into the mix.

Becky S's Peacock window is looking fantastic and now that everything is ground I have to say that it fits together absolutely flawlessly and I am NOT exaggerating.   I'm unsure of what she plans to do with borders but we'll discuss that next week before the background glass gets cut.   Personally, I think a double border is required on a window of this level of elegance!

Bonnie is just waiting for some flesh colored glass to come in so she can finish cutting her Three Ladies Window.  The background will be clear and there will be some green grass added along the  bottom edge and then she'll begin grinding.  The good news is that the flesh colored glass has come in. 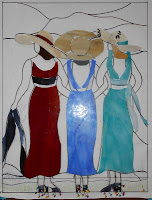 Angie has her border attached on her Compass Rose Window and she also has the front side almost completely soldered.  With just the back side left to go I think that this may be completed upon her return! 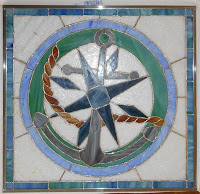 This is the start of Brenda's first of two Transom Inserts.  We spent a good deal of time trying to figure out the placement of the inner beveled border but it all worked out in the end.  The sad thing is that after she left I found that I had already worked it out about a month ago and had it pinned to the wall where I didn't think of it or see it while Brenda was in class.   Sadly my mind is slipping!

Linda L's got the zinc channel curved and attached to her Easter Mickey Mouse and then proceeded to solder the front side of it.  Now that the front is completed she's able to flip this window over and move along to the back side of it.  Since she's taken it home there's a good chance that this will also be  completed when we next see it. 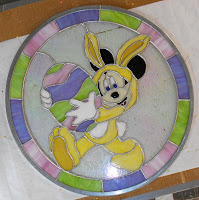 We seem to have a common theme running through this post.   Below is Mary Grace's 'B' Window and she's currently working on wrapping the pieces that she has cut and ground.  Why is she wrapping before everything is cut?  Because we want those stems that run throughout the letter to line up PERFECTLY and this is the best way to do it. 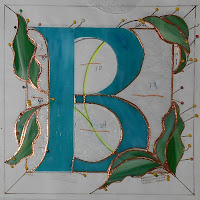 Myrt's second Ribbon Bordered Fleur De Lis Window is moving along very quickly.   With a lot of this already ground she'll be knocking this out in no time at all.   In fact, it may be time for her to start thinking about what she wants to do next. 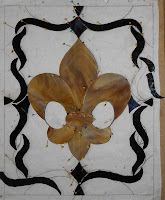 Then we have Shelley who came in and filled in all of the missing background pieces in her Tree Of Life Window.  Now that everything has been tacked into place she's ready for her first border. 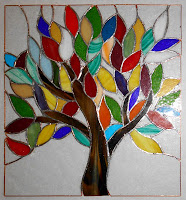 Mary is back and she's never been one to shy away from a window with a lot of pieces so why would she do something easy now?   This Dream Catcher Window may have plenty of pieces but the end result is going to be spectacular.   In following with the theme of this post Mary will make the circular section and then tack it together before she moves along to the rest of the window. 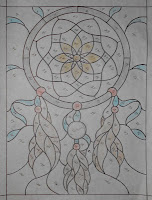 And to wrap this up we take a look at the Cardinal Pattern that Tracey is going to start cutting glass out for next week.   She needed to make a second Cardinal  Window but didn't want to do the same one that she did before.  After some hunting through the pattern drawers she found a number of different patterns and ended up picking this as the winner.

That's what happened this week--and so it goes!