We're going to start things off this week talking about lead lines.    When you make a window you sometimes have to put extra lines in to make certain cuts possible.   These lead lines can be very distracting and worse yet, many people add lines that they think are needed when they actually aren't.  Look at the picture of the cardinal below.   This is a window that I stumbled across while browsing the internet.  It's nice enough but all of those lead lines are so incredibly distracting that they take away from the window. 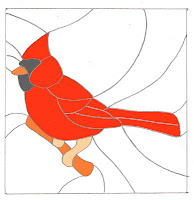 Here's the same bird but with far fewer lead lines radiating outward from it.   As you can see, most of the lines in the first image were completely unnecessary.  Doesn't this look far better? 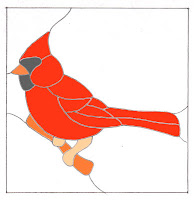 When adding lines to make cuts easier just remember the simple 'Y and Arrow' rule to determine if a line is needed.   If the lines form a Y as on the tail of the bird below then you most likely need to  have a lead line there.  If the line you are adding makes the point resemble an arrow (no matter how slightly) then the line is not needed.   Lead lines need to run out from points, not into points that form an arrow (no matter how slight the arrow appears). 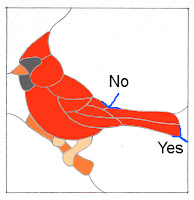 With a little practice you'll immediately know whether a lead line is needed or not.  Practice makes perfect!


Okay then, first up we have Rowena's finished iridised Butterfly Window which turned out to be a truly beautiful window.  How beautiful?  Well, she's already begun cutting out another after seeing how nicely this turned out. Sometimes a minimalist pattern pays out in dividends which is certainly the case here. 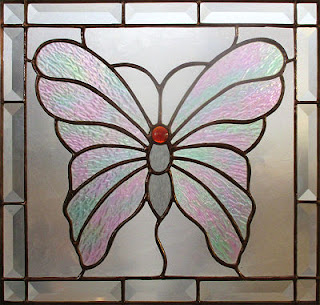 Cindy's beveled Transom Window was completed this week and it's just dripping with elegance!   She used black patina on this project because when you're dealing with this much glass the contrast of black patina really heightens the clear effect.  Although I'm a fan of copper patina I ALWAYS use black on clear pieces. 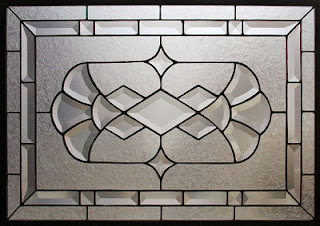 Angie finished five different Dragonfly Flowerpot Ornaments of which we have 3 pictured below.   I always say that if you are going to do repeats of a specific pattern you should cut them all out at once, grind them all, wrap them all, and then solder them all.  Why?  Because doing them one at a time is far, far slower for some reason.   Angie is two weeks in and has 5 Dragonflies completed-- yep, that's fast! 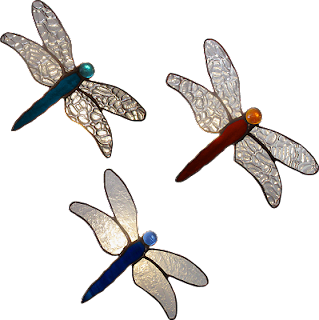 For the last of our finished pieces we have a Halloween Window that I've made.   This was a sort of test project for a larger New Orleans Window that I will be drawing up soon.   I always come up with changes that I wish I'd made whenever I complete a window so making this small, less detailed Skeleton has shown me a few things that I want to fix when I draw up the large version. 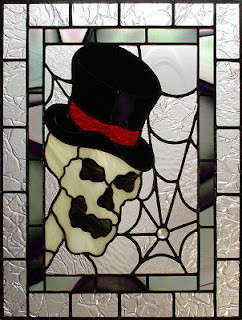 Jan began work on a Dragonfly Window and she's already got all of the glass cut out for it.   I love this pattern and think I may make one of these for the shop. 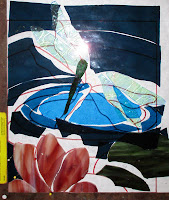 Kerry's began grinding his Tractor Window and he's got one of the small tires fitting together already which is one of the  tougher sections of this window.  Slow and steady will be the key togetting this detailed window to fit together. 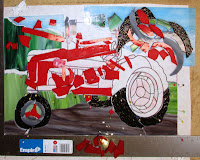 Jeff tacked together more pieces for the second (middle) section of his window and then put the first section next to what he's currently working on to see how it's all tieing together.

Susan R finished grinding her Bass Suncatcher and began the wrapping process.   I think we'll see her soldering this upon her return because it's almost completely wrapped already. 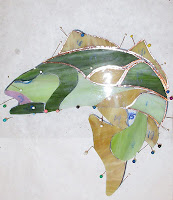 Belinda spent her night grinding her Wine Cats and they're ready to be foiled.  There are a few pattern changes that we're dealing with by leaving blank sections in the window but those will surely be filled in during her next class. 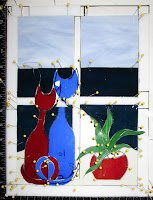 Tracey's got her Grinch on!  She's just about ready to tack this together and then get her multi-colored border cut out and attached.    This pattern is proving to be immensely popular with a lot of our students from all of other classes. 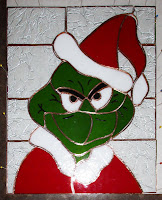 Sheri got all of her Bumblebee and Honeycomb Suncatcher completely cut and ground this week and then for good measure, she started working on a Bumblebee and Flower Suncatcher. 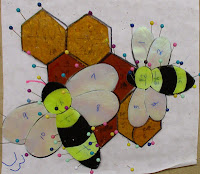 Mary Grace has started working on her Archery and Rifle Window but we had a bit of a SNAFU while cutting out the poster board pattern pieces.   We had changed the arrow completely so Mary Grace retraced the new pattern on the back of the old tracing.  When I helped cut out some pattern pieces I accidentally cut from the wrong side giving us pieces that didn't matched the new pattern.   Luckily it didn't take too long to retrace everything. 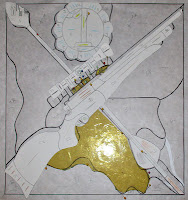 Lara had a busy night as she filled in the circular sections of the two corner of her large Peacock window.  One of the circles has already been filled in with a large peacock feather which was even tacked into place.  The flower for the second circular section at the bottom is already tacked together and only needs some background glass cut before it's soldered into position and Lara flips this window to solder the second side. 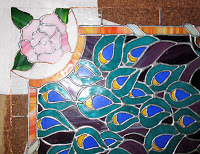 Tasha's grinding her large Cat Suncatcher and working at a nice steady pace. It may be hard to make out the subject right now but next week she'll have more of this fitting together.   The trickiest part of this will be the face because getting faces to line up involves a lot of pins and precision grinding.

Martha's Rose Window is wrapped and ready to be tacked together.   Once that's done she can cut her background.  Again, this is the best way to do things when using a beveled border since bevels can fluctuate in size.  Wrap those bevels and tack them together BEFORE you cut or grind your background glass.

Becky S has ground even more of her Heron's wing  feathers into place which means that she'll start working on the flowers along the bottom edge soon enough.

As predicted, Annette completed the grinding on her Fido the Poodle Window and sat down to a relaxing night of glass foiling.   She's moving quickly and efficiently with her copper foil so it won't be long until this is tacked together and those missing pieces are filled  in. 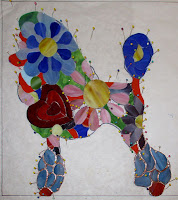 Susan D's Spider Web Corner Decorations are coming together now that she's grinding them.   She has 2 large webs (one of which is pictured below) and 2 smaller webs.   Once these are done she'll work on a jeweled spider to accent these corners. 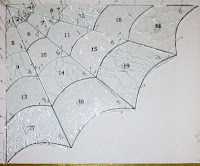 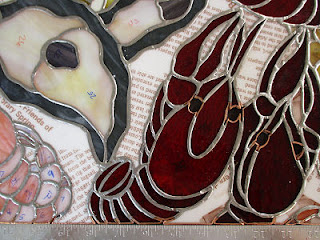 Melissa's bird incident may have slowed her down for a minute or two but she's got her ducks back in a row (so to speak) and came to work on giving her birds some eyeballs.  She's got her next pattern picked out so it won't be long now before these are completed and flying out the door.

Barbara got her Wisteria tacked together and then filled in her missing piece.   Once that was handled she cut out a piece of background glass into a perfect rectangle and traced the Wisteria onto it.   A few cut later she had her background cut and even ground!    Cutting your background this way always helps make things go quickly.  It's just a shame we can't use this technique on EVERY window that we make!

Patrice has her Umbrella Lady all ready for solder as all of her border pieces have been cut.  She'll get some channel around the outside edge of this and then begin applying her finishing solder bead.

Lastly we see that Shawn has been grinding her Autumn Leaves Window and her grinding skills have truly taken off. She has a complete grasp on how to overlap pieces and use their edges to shape other pieces for a perfect fit.

And that brings us to the end of things this week.