Tid Bits and Other Things

Our tip this week deals with grinding.   For some reason people like to grind their background pieces and then fit the subject matter into the openings left behind but this is always wrong.   You should always grind the background glass to fit the subject.   This prevents things from twisting out of shape.  Keep this in mind and your windows will look better than ever.

Last week when we looked at Jeannette's Humming Birds and Flowers Window all you could see were black pieces of glass.  Now that she's finished it and we have it hanging with a little light behind it you can fully see all of the beautiful glass that she chose to use.   Blue and green always look great together and Jeannette proved it with this window.

All I can say about Tracey's Grinch Window is that I almost can't handle a window with this much character!  She's captured his likeness PERFECTLY and her work on it is magnificent.  She should really be proud of this! 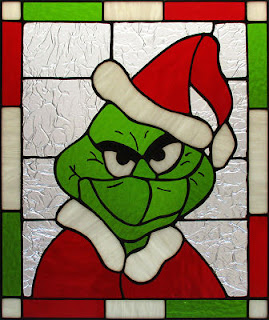 Angie's Beveled Bee and Flower Window is both vibrant and charming at the same time.   As bright as the border and the flower are, they steal no focus away from the Bee at all!  That beveled bee is so cute that I think he'll make a wonderful suncatcher all on his own. 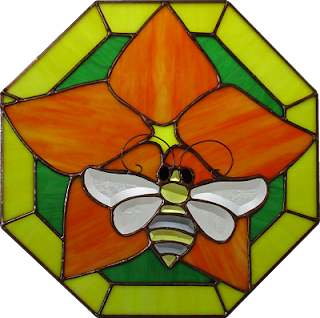 Barbara H's Wisteria Window is gorgeous.  I had no doubt that it would be but the border glass that she picked out made it even better than I expected.  It was absolutely perfect for this because it adds a little bit more purple without overloading it as a solid purple border would.  Brilliant!

Melissa completed her version of the Birds on a Wire and made it look easy.  Just look how straight that branch is that they are sitting on.   I think she enjoyed making this because it was far simpler than anything else she's done in a very long time.  Wait until you see her next window though-- she sure likes those repeating patterns of tiny, tiny pieces! 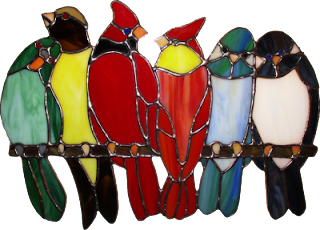 Halloween is in the air so I made this delicate Bat Suncatcher to see just how sturdy it would be.   And the answer is, well, not very.   I really liked the look of the wings on this but next time the bat will get a moon behind him to keep things nice and solid. 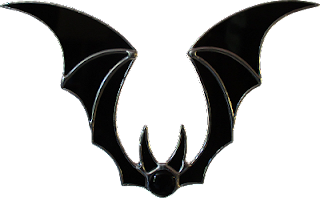 Mickey Mouse hasn't been made in a while so when Jeanne L saw the pattern hanging on the wall she knew she had to make one.  Besides, she already has a Minnie and you really do need a Mickey if you only have Minnie Mouse.  Jeanne made this quickly and efficiently in just one class.  Not bad! 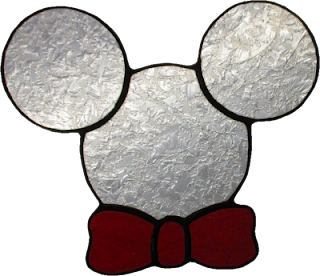 Here are two Dragonflies that Jeannette also completed this week along with a Personalized Dove Suncatcher as well.   She purchased a pack of metal letter beads, strung them out into the name 'Lillian' and then tacked the beads under the wing.  She's got about 5 move of these to make and she may need another pack of letters to finish them! 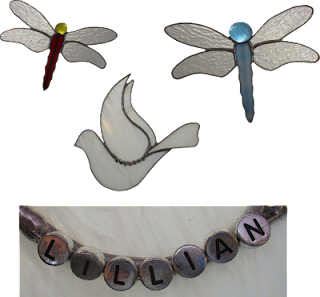 Here's a look at just one of six Dragonfly Flower Pot Ornaments that Angie completed this week.   Start to finish, she did it all on her own which even includes the stakes.

Now here's the thing-- Rowena also made Dragonflies and as we saw above, so did Jeannette.   I don't believe I got pictures of Rowena's but her story is the same as Angie and Jeannette's story-- from start to finish she did them all on her own.  I just don't know whose belong to whom. 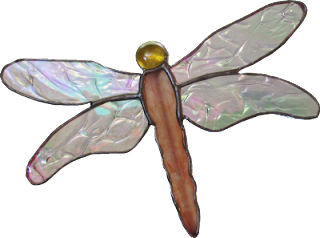 Next we have Jan's Dragonfly Panel which has now been completely ground save for three pieces that she lost due to unfortunate circumstances that you can ponder about!   Rather than re-cutting new pieces she's going to wrap and tack this first and then use the empty areas as a pattern to get an absolutely perfect fit. 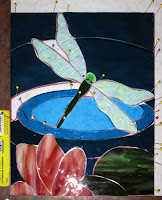 Susan R found another 3D Bird ornament online and printed it out to use as a pattern to make her own.   The bird is all cut, ground and wrapped so she'll be starting something new next week after  she completes this. 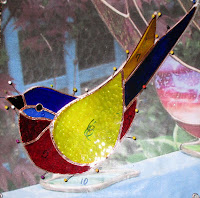 Angie also got two pumpkin Suncatchers started after she completed each of her Dragonfly Flower Pot Ornaments.   I will be very surprised if these aren't done in time for our next post. 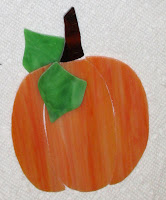 Jeanne M said that she wanted to work on a Bat Suncatcher and that's exactly what she did.   She's got her bat and moon all cut out (this Bat will be far sturdier than mine because of the moon) and she'll begin grinding this when she comes back in.

Barbara H began working on a Fleur De Lis Window and she has the clear FDL all cut and ground already.  Since it's been cut from clear glass you really can't see anything but the grain lines on each of the pieces (done in blue) but this will really stand out when it's off the work table and lit up from behind.

Becky B's Springfield Fish has all three(!) of its eyes tacked into place which means that this window is ready for its background glass.   That should be cut out upon Becky's return and then she'll decide what to do about borders for this project.

Cindy has the top lid to her Baby Box just about completed.  There's only the background glass behind Skylar's name to go and then a quick border.   Once the lid is made the rest should go very quickly because the box bottom itself is very easy to assemble. 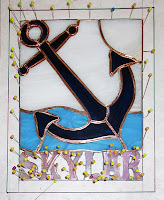 Belinda is close to winding things up on her Wine Cats Window now that she's filled in her missing pieces.  That went quickly because when you cut from openings in your project rather than  pattern pieces, you tend to get a perfect fit the first time with minimal grinding required.  Belinda hopes to get some soldering done on this while she's at home so there's a good chance that we'll see this finished next week. 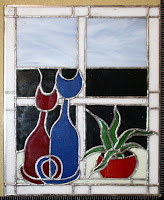 Carol's Beer Is A Solution Window made incredible progress  during class as she got the center tacked together and then got two borders and some channel attached as well.   That's as productive as you can get in the span of 3 hours!  This ought to be completed soon and then maybe we'll drink to it! 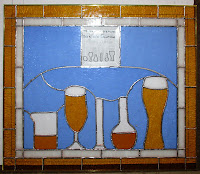 With the back side of her Peacock Window all soldered Lara only needs to check the front side for any run-through's and then she'll be able to wash and color this spectacular Window.   We almost got a look at it completed this week but we had so many finished projects that I wanted to make sure this got a place in the spotlight it deserves.  This will certainly lead off out next Blog update.

And Fido the Psychedelic Poodle is nearing completion as Annette managed to get her background glass ground, wrapped and tacked.   She's picked out a beautiful border for this and we'll surely see that get attached upon her return.   Nice doggie! 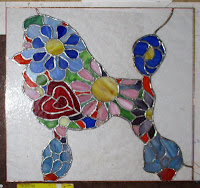 MiMi's Seafood window is ready to walk out the door for the last time as it now has its border pieces attached as well as the channel.  She's been soldering the front side which is very nearly completed and that only leaves the back side to go before she gets to wash this, color it and then take it home for good.

With all of her background glass cut out Mary is all set to begin grinding her Heron Window.  She's picked a clear background that you really can't see while it's on the work table, but that's going to make the subject matter stand out beautifully once this is hanging in a window.

Next we look at Becky S's Egret Window.  Now that all of those feathers have been wrapped you can really see all of the detailed feathers in the bird.   Becky also got the beak, the legs and the tops of her Cat Tails cut and ground as well which proves that she was keeping busy.

Yeah, they're hard to see while on paper but Susan D has two more Webs all fitted together.   Spiders are on her horizon if I can just remember how to make them!

With each piece he grinds into place, Kerry's Tractor gains more and more definition.  The steering wheel and the seat have yet to be cut and before we have him do that we're going to tack together all of the pieces that he has ground.  That will allow us to move things around easily without all of the glass scattering out of place.   It's been a lot of work but Kerry's up to the task and the good news is that the end is near.

Shawn is fast approaching the end of her grinding which means that wrapping will be consuming her time very shortly now.   I think she's going to be so very proud of this window when she sees it completed because it's coming together beautifully!

In the end, with her final border cut and ready to be ground, Martha's Rose Window proves without a doubt that simplicity can be stylish all by itself.   And to think that it isn't even completed yet!

So there you have it.   Classes start again tomorrow which means that it won't be long before we're back with yet another update!
Paul
Bayou Salé GlassWorks