It's so good to be caught up again.   And this post really makes it official because it's out on the correct night (a few hours early even!)  Let's jump right on in here.

Jeanne L finished her Circular Rose Window and as I always say, a window ALWAYS looks better once it's cleaned up.   I got the impression that Jeanne wasn't entirely pleased with this as she was soldering it, but now that  it's been cleaned up and back lit there is absolutely NOTHING to complain about!  I love it and Jeanne does as well. 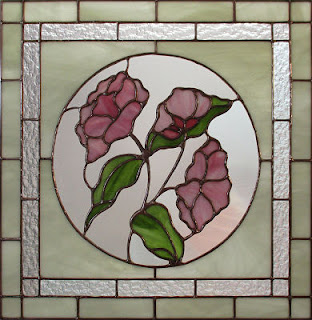 The Dark Side Of The Moon.   That's what this is.  It's a classic and Angie captured it perfectly (google it if you don't know what it is).   I'm gonna make one of these myself because this will go quickly at a show! 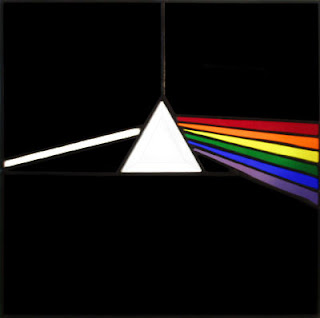 Jeannette completed her Guitar Window and it's a winner.   I'd like to point out that the guitar cuts into the border which could be problematic since they are both made out of very similar brown glass.    To stop the two browns from blending together into a nondescript brown blob she used a light piece of brown for the top of the guitar and then made sure that the pieces of the border that touch the guitar were the darkest sections of her border glass.  As you can see, the end result is perfect and the guitar doesn't disappear into the border at all. 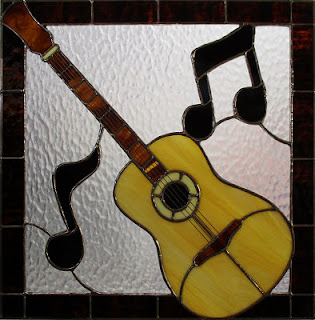 Susan R has her Swan Window completed and the outer edge has been surrounded by flexible Lead H Came.  You have to stretch it before using it (like any other came) and if your outer edge has any inconsistencies it will allow them to show.   As you can see, Susan's Swan has no inconsistencies. 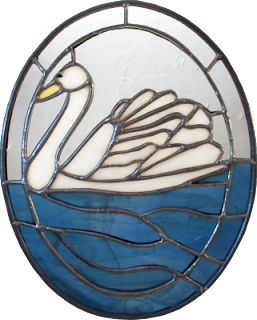 Sheri's Autism Puzzle Piece is perfection.   Look at all of those intricate cuts that fit together like, well, a puzzle!  It takes a lot of time to make this four piece suncatcher because of the inside curves that have to be ground out rather than cut out.  Sheri's fits together perfectly and this proves that the size of number of the pieces doesn't make something easy to do.   It's all about the complexity Of the cuts. 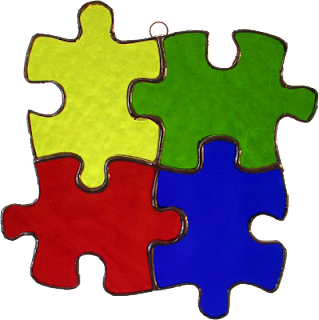 Betty made two suncatchers this week.   She put the finishing touches on a Mary, Joseph and Jesus Suncatcher and also completed a large bevel Heart Frame which is normally made with 3 x 1 bevels.   This one is made out of 1 x 6's so it's a BIG difference indeed. 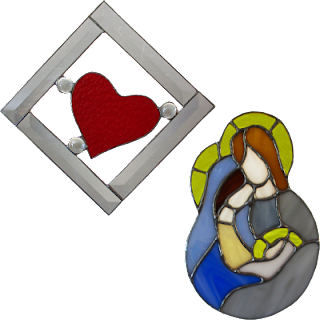 Jeannette was as busy as can be this week as she also finished 3 Dragonfly Flower Pot Ornaments, a Butterfly, and a beveled Dove.  That's what I call making the most of a single class! 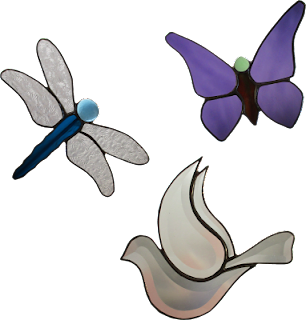 Angie's LSU Window is ready for hanging and her use of Oceanside water glass gives this a slightly different look from other LSU Windows that we normally see done in rough rolled glass.   This is a gift that will surely be appreciated. 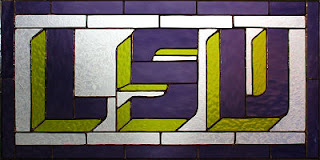 Linda L began and finished this lovely circular Saints Fleur De Lis.  She has only one more class to go with us before she turns up MIA due to down time after a shoulder rebuild so her final project will be something small again. We'll take a look at what that is a little further on in this post. 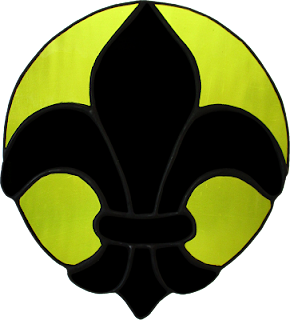 Mary started and completed another Butterfly Lawn Ornament.    I don't think it's possible for her to finish these any faster now. 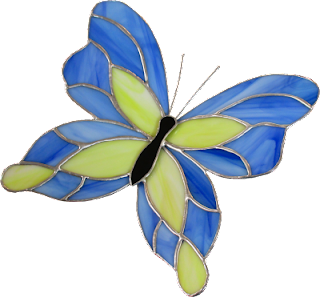 Tracey's Grinch That Stole Christmas Window is moving smoothly along save for one little hiccup.  See that missing green spot?  She had accidentally flipped the pattern before tracing it so it was backward.   She has more green glass at home and will cut a replacement piece next week.   The same things happened to me just this past week as well. 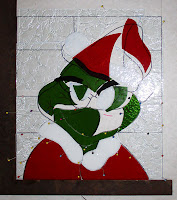 Cindy came in with her bevels wrapped and then assembled all of the bevels to form a cluster in the center by merging 3 different bevels and adding some diamond bevels to join them together.  She then traced it onto her background glass and got that cut and ground as well.

Becky has her Springfield Fish, or Swamp Thing, tacked together and next week she'll get the green pupils (all three of them) cut into the whites of its eyes.  After that she'll be ready for background glass.

Mimi finished wrapping all of her seafood and tacked it together as soon as she walked in the door.  Then we slid a piece of white glass that we fired a newsprint pattern onto it underneath the seafood and began cutting a few pieces at a time so the text would all line up.   It's looking incredible already!  You'll never see another window like this again. 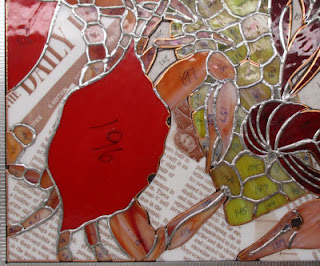 Susan D is gearing up for Halloween as she gets some decorative corner spider webs made.   I can't help but wonder that if she just stopped cleaning perhaps her corners could look like this naturally! Well, maybe not as sparkly though.  Once these are finished she'll work on jeweled spider to set it all off.

Shawn completed cutting out the last of her leaves, moved over to the two acorns, and then began cutting out the branches for her tree.  This is another window that's moving along nicely and Shawn's cutting is getting better and better, week by week.  Maybe it's that Prada Cutter she has now....

Martha has started working on a Rose Window and her cutting is beautiful.   Things are already fitting together and these pieces haven't  been anywhere near a grinder yet.  Slow but steady may win the race but when it comes to cutting Martha cuts with great accuracy AND with speed!

Belinda got a nice deep blue border cut for her Hummingbird Window and then set upon soldering it.   Once it was attached she got the entire front side of her window soldered as well.  I'm pretty sure that she'll likely wrap this up on her return. 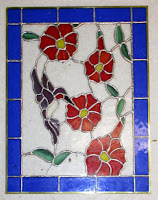 Jeff has all of his flower cut and ground along with most of the background glass surrounding it.  He's steadily working his way through the middle section of his window and the remaining pieces are fairly large so it should go easier for him now. 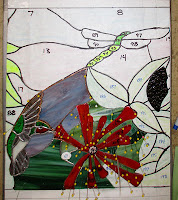 Annette has cut her last piece of Poodle glass and is now grinding all of her pieces.  She grinding quickly and efficiently and I think she'll be finished grinding this quicker than she thinks she will.  It's not a race, it's about perfection! 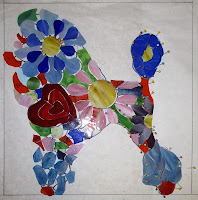 Rowena's Pumpkin Window is nearing completion as everything has been cut and tacked together including the border.  She's already begun soldering this and if I know Rowena she'll have this completed when she returns.  She already has her next pattern so she's all set to start something new.. 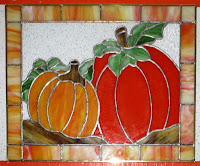 Mary Grace has her borders attached on her Air Force Logo Window and even has most of the front soldered already.   This is probably going to be completed when she comes back in so we'll be seeing something new started by her next week.. 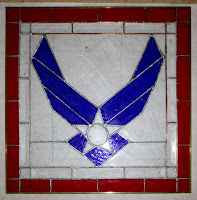 Barbara H got all of her Wisteria pieces ground before leaving and hopes to begin wrapping all of those little pieces while she's at home. Once these are foiled she'll tack them together and trace them out onto her background glass for a nice perfect fit.

Here's Linda L's next two projects.   These are beveled Heart Suncatchers and she has two of them in progress right now.  With everything  cut and ground she'll easily solder these next week and have them in the finished section of our next Blog update at the top of the post!

Lastly, I never got a picture of Patrice's Umbrella Lady! I watched her walk out the door with it but never thought about the picture until she was long down the road.   It looks like next week you'll get to see a LOT of progress done on it.

Until next Monday, may all your cuts run smoothly and your grinder wheel not chip you glass.