Do You Do Nails Here?

When cutting inside curves the first thing we do is cut a straight line from the starting and ending points of the curves.  This is called cutting 'Point To Point' and should ALWAYS be done before attempting an inside curve.   The second step is to take a nice graceful curve or two out of the glass before attempting to cut the curve itself.

In the picture below the orange line represents the graceful curve I would first cut into the glass to help get the final curve cut out.  There are no sudden turns and it's somewhat shallow.   This gracefulness helps the glass to break correctly. 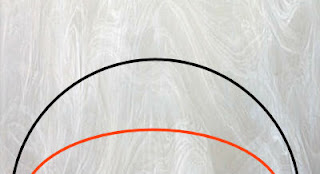 This next picture shows what I see too many people doing.   The orange line is ragged, en-even, and has sudden turns in it.   This is the perfect recipe for a broken piece of glass.   Take your time and if you have to don't be afraid to draw a line onto the glass to guide you. 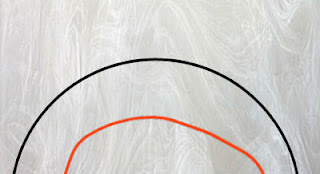 Lastly, even after the orange line was cut I'd still go in a little deeper before attempting that final true cut.


Okay then, our first completed piece this week is of a Wedding Plaque that Jeannette made as a gift.  She started by sandwiching the invitation between two pieces of glass and then foiling them together so she ended up with one (thick piece).  Then she just added borders while building it upside down so that the invitation is flush with the front.  After washing it carefully she had this beautiful wedding keepsake that will be cherished forever. 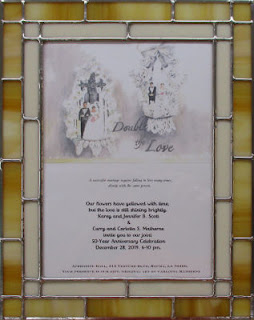 Jeanne M finished her first of three(?) Mardi Grass Mask Suncatchers and judging by how nicely this one turned out I have no doubt that we'll see even more of them in the days leading up to Mardi Gras. Jeanne takes her time, never rushing, and always turns out quality work. 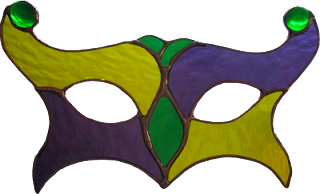 Jeannette also put the finishing touches on her latest Cardinal Suncatcher which was actually a repair that required some major work to get back together again.  Looking at its picture you'd never know that this was literally ripped apart into three pieces to repair. 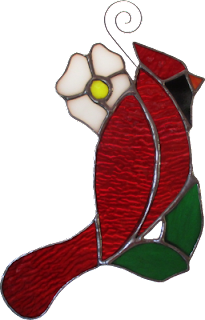 Annette's begun her next project and although it's hard to see right now I'll tell you that it's another Christmas Window that will match the happy Grinch window that she made just in the Saint Nick of time for Christmas last year.  (Was it really that long ago?)  I'm not going to tell you what it is this week but if you can't guess then you'll have to come back and read our next post when I reveal just what it is .  The hints above should be enough though as I can already see him in the glass that she got cut out this week. 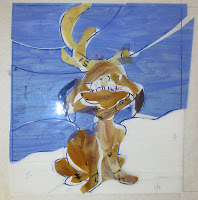 Jan has begun making a Red Fish  and got all of her glass cut out in just one class.   Well, actually that's a bit of a lie because when she began grinding she realized that two of the leaves are missing but that's trivial and will be rectified when she returns next week. Meanwhile, it's on to grinding for Jan. 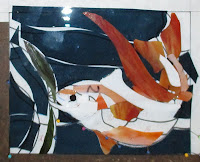 It's been a while since we saw a Peacock Window being made so Angie has 'volunteered' to make the newest addition to what has become one of our Bayou Salé GlassWork staples.  She wrapped her bird this week, tacked it together and then got the background cut, ground, wrapped and tacked as well.   That leaves just a border and some solder left to go on this. 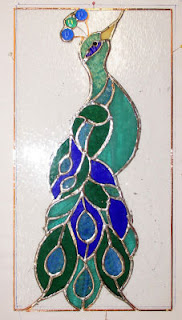 Rowena is making a Mardi Gras  inspired window and she plans on decking it out with all the trimmings by adding beads to it.  Now that sounds simple enough but let me tell you that cutting out all those round circles and then cutting out the background to match it is very, very challenging.   But I know if anyone can do it, Rowena can! 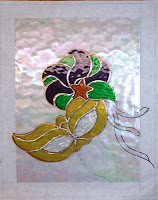 Martha's begun working on a window featuring all clear glass.   There will only be three (possibly two) textures in the entire window but mark my words when I tell you that this is going to sparkle.  With just background left to cut she's moving along at a nice pace with this project.

Linda F's Witch Window is so very near completion.  After finishing up with her cutting Linda moved along to the grinding process and with only 3 pieces left to go she'll easily get a border on this upon her return.  Who know-- this may even be finished when we see it again. 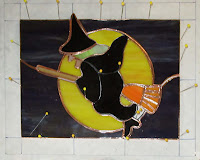 Mary Grace made some major headway on her round Anchor Window as she completed the rest of her cutting and then even got most of it ground as well!   That's a productive class and with just a few pieces left to grind she'll surely be wrapping her pieces upon her return. 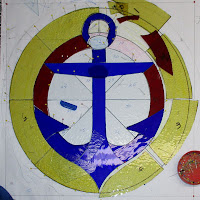 Kerry also managed to accomplish a ton of work on his Beer Window as he completed grinding and then wrapping all of his pieces.  Then he tacked it all together for good measure.   Next week he'll be adding a border and soldering for sure. 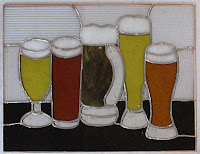 Susan R worked on her Seafood Window over the holidays and now has all of the subject matter all cut and ground.   She's even very nearly finished wrapping all of her pieces but that process is painstakingly slow due to the fact that most of her pieces are microscopically small!   And that's why this window already looks as great as it does.

Tracey's Magnolia is another round window  that's being worked on-- one of three in fact.  She has just a few more pieces of the leaves left to go and then a small amount background glass which I'm sure will be accomplished upon her return.   After that she'll move along to the grinder. 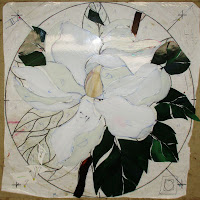 Jeff has decided to forgo a border on his window which is fine because it's going to be installed into a window opening rather than suspended with chains.   He was very careful about the size of his window while he was working on it and a small piece of brass channel along all four sides finished it off beautifully.  He spent his time in class soldering and has the front side just about completed already.   His soldering is perfection and there's a slight chance that this will be completed upon his return.

Shawn finished grinding all of her prices for her stunning Sunflower and Cardinal Window and then moved along to the wrapping phase of her window's creation.   As you can see she got a lot of it done already  and she's taken it home with her so she can possibly get some wrapping done there throughout the week.  The sheet music for 'Here Come's the Sun' has been fired onto the glass that Shawn will use for the sunflower's center and once this is tacked together we will cut that the center for a perfect fit.

Betty has been busy working on 3 pairs of Cardinals which will involve some tedious wire work.  Before any wires get attached she'll have to finish all six of her cardinals completely-- that means all the grinding wrapping and soldering needs to be completed.  This makes attaching the wire much easier. 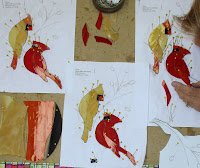 Mary's been as busy as a bee working on her own Sunflower Window.   Now that everything has been ground and fitting together perfectly she'll be able to begin foiling (wrapping) each of those pieces.  She's done excellent work on this and you can clearly see that in the picture below. 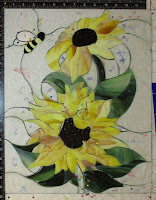 MiMi's Circular Heron Window is creating quite a stir on the Facebook Stained Glass pages and you can easily see why.  She got most of the grinding on this completed before calling it a night and I know for a fact that she's got it all ground and and ready for foil.  I'm still unsure if she'll be going with a border or not on this and that's something that we'll discuss when she comes back in. 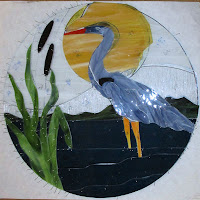 Cindy began soldering her clear textured Sunburst Window  and when class ended she had finished the second side of her project.   This would have been completed  but she wants to color the solder black which means that she'll need to let this sit for about 45 minutes with black patina on it before she can wash and wax it.   So, for all intents and purposes, this is a finished window that we'll see featured next week.

And lastly we take a look at the window that Barbara H is working on.   This week she traced and cut out the paper pattern for a Cross Window that always looks great.  She has her 9 bevels set into place and her glass all picked out so when she comes back in she'll begin cutting glass. 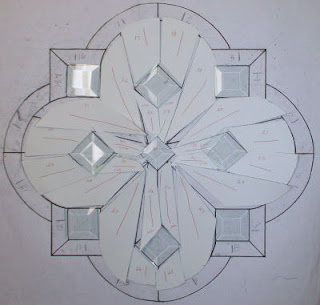 And that as they say is that!