She's Got No Scents

I see a common problem that happens time and time again.  Someone tells me that something doesn't fit well and they just assume it was bad cutting on their part when, in fact, it's just a simple error in positioning.

When you are dealing with symmetrical or mirror images, be sure to try the piece you are working with in all possible positions before deciding that it fits.   First, make sure you are looking at the front of the glass and that you don't have the bottom side up.  Then spin the piece slowly clockwise 360 degrees so you can see all the ways the piece can fit to the pattern.   Sometimes a piece may look correctly orientated when it isn't. In the example below the red triangle isn't perfect and will only truly fit one way.  You can grind it so it fits with a different point on top but that would leave gaps along the three edges. 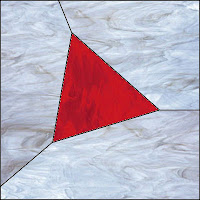 Always check for the best possible fit before you grind AND before you tack a piece in place.  It's simple mistakes like these that separate the hobbyists from the stained glass masters!


So this week we got to see Cindy put the finishing touches on her Sunburst Window before starting on a new project.   All she really had to do was color and wax it but the coloring process takes 45 minutes when using black patina so there's a lot of down time while you wait.   Once that was done Cindy waxed this and then we took a picture.  A lot of our students said that they weren't sure what to expect from a clear sunburst window but that they were amazed at how impressive this was when they actually saw it completed. 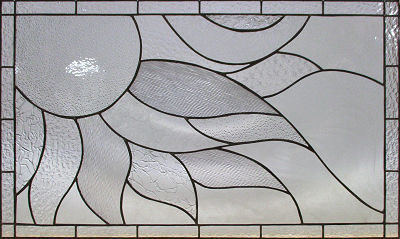 Barbara H made the most of the bad weather that we had last weekend by spending two days in her shop at home cutting, grinding, and wrapping all of the pieces for this Cross Window.   I was blown away at how wonderfully she did entirely on her own.  When she came into class she soldered it and then we took this picture.  PERFECTION!  And this was only a 2 class project for her. 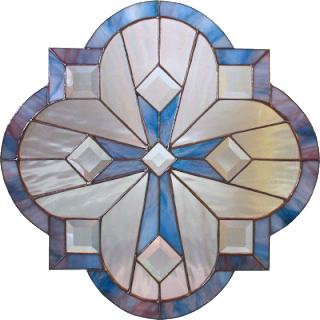 Linda F completed all the work on her Witch Panel this week and although she's early for the Witching Season I'll just say this, "It's far better to be early than late."  This is a cute pattern that she derived from a suncatcher  and I'm thinking that we'll see a few of these done as a suncatcher come October. 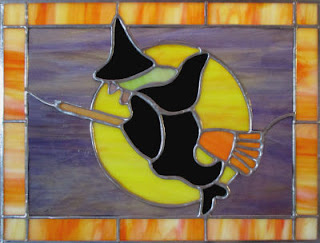 For our last completed project we have this Heart Suncatcher that Cindy started and completed with the remainder of her class time after finishing up her clear Sunburst Window.  Love is in the air! 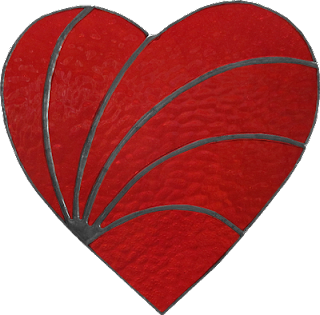 Jeannette found a Swan Window online and adored the background but didn't really care for the swan itself.  After searching a bit more she found a swan she liked and we then put the two patterns together to make this stunning window.  In just one class she managed to get almost all of the pieces cut out, so she'll surely be grinding when she comes back in.   I'll be surprised if no one else will want to do this pattern as well. 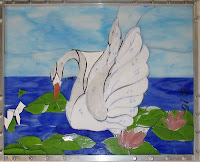 Here we look at Belinda's Church Window and it's all ground and ready to be wrapped.  There are still slats that form the boards that make up the church which she'll cut AFTER most of this is tacked together.  Once she gets that done we'll go into detail about how she achieved that quickly and easily.

After tacking her Sunflower and Cardinal Window together Shawn took the piece of tan glass that the music to 'Here Comes the Sun' has been fired on and placed it behind her sunflower leaves.  After positioning it the way she liked (with a slight tilt) she traced around the leaves and then cut her final piece out.  It only took a small amount of time to cut, wrap, and tack it into place.  It looks great, doesn't it?  Then to top it all off, she even got her first border cut and ground as well! 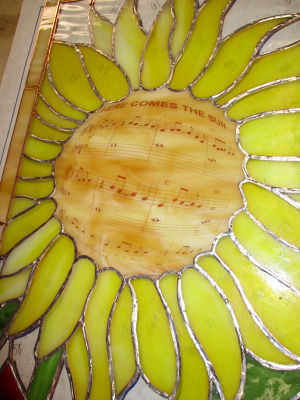 Jan came in knowing that she'd be spending the class grinding but I don't think she thought she'd manage to get it all ground before leaving.   Alas, that's exactly what happened!  The hard part is well behind her now  and the foiling and soldering should be as nice and relaxing as her fish makes me feel. 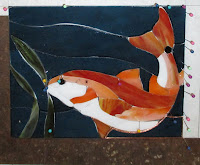 Betty has been busy, busy, busy!  She got three pairs of Cardinals, 2 solo Cardinals, and a Flower suncatcher all ground and wrapped before class ended.  That means that next week she'll be ready to embark on the wild art of wire bending since each of these pieces requires wires of assorted lengths and twists and turns. 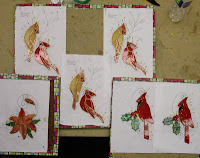 Lara got all of her background cut out and then ground and wrapped the pieces as well.   Everything fits perfectly and since Lara already knows what glass she'll be using for her border I can assure you that it will all be tacked together upon her return and ready for soldering.

Max is looking good!   Annette got almost all of this ground this week so she'll be wrapping glass when she returns.   Before she starts that I'll  show her how the nose is going to be cut into place although the word 'cutting' is a bit of a misnomer.   It will actually involve drilling a hole in the glass to avoid having nuisance lead lines coming out of the nose and ruining Max's face. 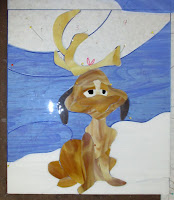 With all of her background cut out Martha is ready to move on over to a grinder.  He background was cut out of clear water glass so it's hard to see on the pattern but trust me when I say that it's all there.  Her cutting is VERY precise so I don't think the grinding will take her long at all.

Tracey forgot her green glass at home for the remaining pieces of leaves in her project but that didn't mean that she couldn't begin grinding what she had already cut out.  Three hours later all of her pieces were ground and her Magnolia Window looks SPECTACULAR! With just 11 pieces left to cut out I'm sure she'll have this tacked together before she leaves class next week. 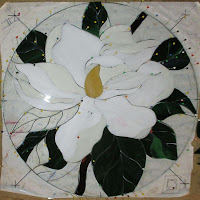 With all of her seafood glass now wrapped Susan R squared out her window by building a frame around it into which she will put her background glass.  Once in place she'll then trace around the seafood so the background can be cut to perfectly match her pieces.  It's a long and tedious process but in a window like this it will be well worth it.

Angie got her two borders attached this week and even managed to solder the front side of her Peacock Window as well.   I have no doubt in my mind that she'll have this finished before she leaves class next week as well as having another project started as well.

Last week I said that Rowena would certainly be able to handle the next task at hand for her Mardi Gras Mask Window and this week she proved that she's the woman!  In the 7 days before she came back to class she managed to cut, grind, and wrap 49 small 3/8th inch circles along with 3 slightly larger ones.  She then tacked them together form a string of beads and then she traced them onto her background glass.   By the time class was finished she had all of the background cut out and fitting perfectly.  Bravo! 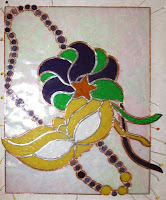 Mary Grace has four pieces that ended up being just a tad bit too small to use so she's left those blank (she had left her glass at home) and began the grinding process of her Anchor Window.  The outside is nice and round which means that it's going to fit into the zinc channel without any worries of holes marring the circle. 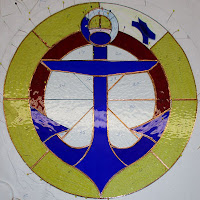 Kerry got his border cut, ground, wrapped, and tacked onto his Beer Window this week and then even completed soldering both the front and back side before calling it a night.  This just needs some hooks and a good coloring so expect to see this completed upon Kerry's return next week. 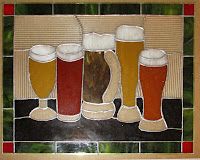 Jeanne L has begun grinding the basket part of her Fruit Basket Window and her pieces are fitting together perfectly.  It won't be long before she starts working on cutting out the fruit itself.  I think she'll be surprised at how challenging picking colors for that can be.  I always end up cutting out multiple pieces to see what looks best. 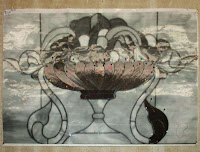 Melissa's been working very hard with some long hours which isn't leaving her much time to get glass work done throughout the week.  In fact, she only managed to get into class with about an hour and a half to spare but in that time she got another feather section ground for her Peacock Window.  I know she's concerned but like I always say, "Slow and steady wins the race."

Mary came in, cut out some iridized clear wings for her Bee and then ground them to fit.  The rest of her night was spent wrapping glass and if you look closely you can easily see that she's working from the bottom upwards.  I love her attention to detail on this. 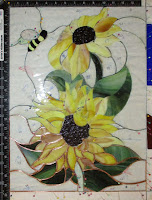 Here we see that Susan D is about to embark upon a new window which she drew up from a picture of her dog Ali.  She's getting all the fur in the proper place and is just about ready to trace out her pattern onto poster board. 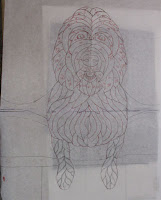 Finally we look at Jeanne M's newest window or should I say pattern?  She's got her Easter Window all traced out and spent the night busily cutting up her card stock pattern into their respective pieces that she'll begin tracing along and onto her glass next week.

Well now, things are certainly picking up again in the shop now that people are falling back into their familiar routines for the new year.    See you all next week!