Most times in stained glass you want to follow a procedure to make your window flow naturally.  The grain for your backgrounds should always run from left to right (horizontally) if you are using blue glass because most everything that you see in the sky flows in that direction.   If you are using clear glass or any other color for your background  you can run the grain in any direction you want-- just be consistent.

Now we all know that every rule has an exception so here we go.  If your border is cut up into random pieces, many of which are unnecessary,  that don't simply make the cutting easier, then you can break the rule of having your grain flow in one direction.  Below I've colored in Shawn's Address Window and I've run the background grain from left to right (horizontally) in one direction.   It looks wonderful to me and there is nothing wrong with making this window in this manor.

Next I've randomly run the grain so that nothing matches up.  Someone used this grain scheme a long, long time ago (but in a galaxy not far away) and it worked so well that many, many other stained glass artists followed suit over the years to the point where it's almost expected, but only when a background is cut up into more pieces than it needs to be.  Me, I like the look below best.   The fact that it doesn't all flow together draws your eye to the window which is actually somewhat boring since it's only numbers.  The look below is the one I'd go for and it's the the look that Shawn went with as well.   You'll see her window later on where the effect is much more apparent.

First off this week we have Jeff who has completed his  Flowers and Scenery Window.  Now that it's hanging up in the light you can easily see how all of his hard work has paid off.  Jeff is going to take a few months off since he'll be working out of state but we hope to see him return a little while down the line.

Martha's Flowing Textures Window is finished  but since she colored it with black patina (which I recommend for all clear glass windows) she had to let it sit for 45 minutes before washing the patina off.  Since she colored this late into class she left for home and I washed it right about the time she would have been walking into her home.   In other words, she hasn't seen this 100% completed yet but as we can ALL see, it's wonderful.

Jeannette put the finishing touches on her Coffee Pot Window and Angie is already eyeing up the pattern!  This window is made out of a bare minimum amount of colors but still stands out vibrantly due to it's high contrast and excellent craftswomanship. 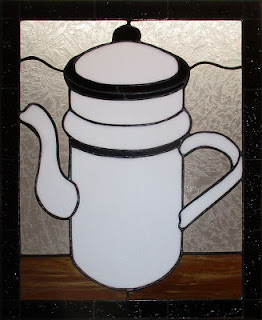 Barbara H put the finishing touches on 3 different Dragonfly Flowerpot Decorations  and even attached the stakes herself which is something that a lot of our students find daunting.  Way to go Barbara! 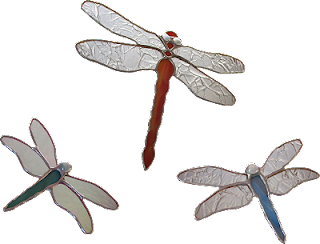 Tracey's Single Sunflower Window is all cut out and she's begun grinding it already.   The long clear top piece had broke in half while cutting it but rather than replacing a huge piece of glass we simply put a lead line through it to make two shorter pieces out of one long one.   Then we saw that the stem of the sunflower looked like it ran straight up and out the top of the window so to fix that optical illusion we cut a green stem and now all is fine.   I actually prefer the green stem over the original lead line stem that the pattern called for. 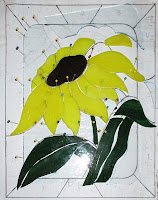 Annette's Cross Window has really taken form now that the background glass has been cut.   She's already grinding her pieces and you can now see the dove perfectly even though it's somewhat hidden behind the cross.  People in other classes are already talking about making this for themselves! 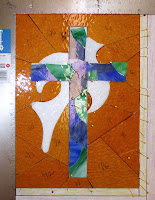 MiMi began working on two Heart Sunflower Suncatchers and has both of them cut out along with one of them being ground already.   Her fit is perfect and her colors are exquisite.  I loved this design so much that I cut three of them out over the weekend for myself!  I'm hoping that this becomes a popular design and MiMi's flawless work will surely help make that happen. 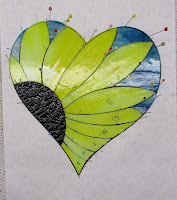 Wow, Lara got all of her Flower Window ground in just one class!   This proves just how much time you can actually save if you slow down, take your time, and stay on the the line while you are cutting your glass.   When Lara was packing up she stumbled upon the missing pattern pieces for her stems so those five opened areas will have pieces cut and ground for them upon Lara's return. 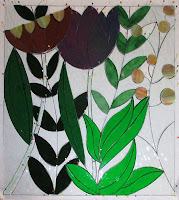 Rowena began work on an American Flag and Eagle Window by cutting glass this week.   As you can see she got it all cut out and even has some of it ground already.  It won't be long before this eagle flies out the door. 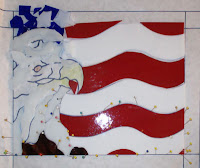 Cindy has all her ducks in a row (so to speak) by having her pair of chickens all foiled and tacked together.   Next week we'll get to see her work on cutting out the background glass for these two birds which, compared to cutting the chickens, will be a piece of cake. 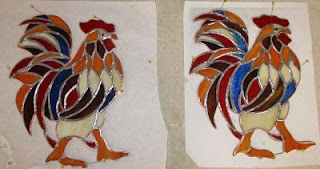 Kerry has begun working on an LSU/Tiger Eyes Window and got as far as getting his paper pattern pieces traced onto the glass he'll be using for the dark sections of the tiger portion of his window.  That means that Kerry will be cutting glass when he returns. 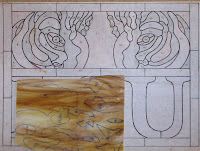 Shelley has returned!  We knew she couldn't stay away from us for too long and when she walked in the door this week after being absent for 4 months she just fell right back into place.   And what's she working on?  Those of us who know Shelley's previous work aren't surprised to see that she's working on a Mermaid. 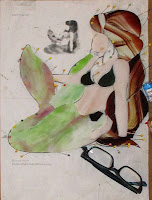 Linda F tacked her Underwater Scene together, filled in a few missing pieces and then redesigned the lower left corner so that it had more coral in it.   Not a bad days work at all!  Next week she'll add a border and then start soldering this beast. 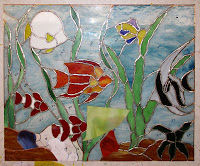 Lisa spent the day foiling all of her glass and she's just about ready to tack this, fill in a few missing pieces, and then add a border or two before finishing this up by adding solder to it.  It's all coming together now for her! 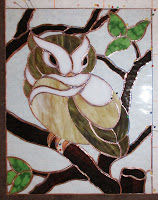 Roxane was back in class this week and tacked together her Penguin Window after which she added two borders, a grey one and a black one.   Now she's just about ready to begin soldering this cute family themed window. 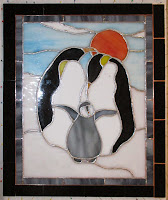 Susan R  has just a few scant pieces left to cut out for the background glass in her Seafood Window and then she'll finish it off with a border before she begins to solder it.   All of her hard work was well worth it as this window already shows off her stained glass skills.

Jeanne M has finished grinding her Easter Window and even began wrapping all of her pieces with copper foil.  She hopes to get this done in time for Easter and I'm sure that this will be hanging in her home before Easter gets here.

The stained glass woman that Angie is working on is feeling under the weather but luckily she has an umbrella with her that her handbag accessorizes with perfectly.  Angie got her first border attached which means that she's got just one more to go and then she'll finish this rainy day scene.

Fran's begun cutting glass for her Red Fish Window but will be redesigning the background of it.   When she comes back in we may see what her new pattern looks like but even if it isn't drawn up she'll be able to continue grinding this colorful fish.  Fran still needs an eye in her fish but we're going to cut that into place once the eye has been cut and ground so that it fits perfectly. As always, the smaller the piece the more important the precision. 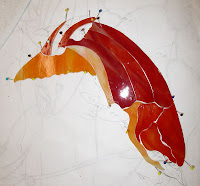 Carol is working on an LSU/Tiger Eyes Window of her own and she's really far along in the creation process.  We make this window in two separate sections so we can be sure that the Tiger Eye portion and the LSU section are EXACTLY the same width otherwise you end up with a lopsided, trapezoidal shaped window when the borders get attached. 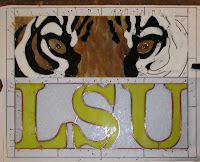 Susan D's Ali The Dog window is officially ready for its background glass.   Now that she has her dog foiled and tacked together the rest of this window will be child's play for Susan.

Mary Grace worked on getting a zinc channel curved to wrap around her Circular Anchor Window and then went to work on filling in some missing pieces that she still had to deal with.   After that was finished she managed to get the front side of her window soldered which means that with a little luck she'll be wrapping up this project upon her return. 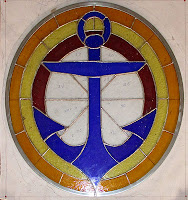 Jeanne L is grinding the fruit for her Fruit Basket Window and it won't be long before she tacks this together and then cuts out her background glass.   I've never understood why I've found this design to be such a fun window to make but Jeanne (and everyone else who's made this) has agreed with me.

Melissa stunned everyone when she came in with ALL of her glass cut!  She was worried about splitting both the green and blue pieces so that each separate piece became two but she said that when the first one cut so easily she just couldn't stop cutting and grinding every one of them.   Melissa wants to finish this next week and if she can get this soldered at home I see no reason why that won't happen.

Betty worked on two different projects this week.  Her small Lily Panel only needed a border which everyone in class helped picked the color for.  Once that was chosen and cut she put that project on the side so she could finish it at home.  She then resumed work on her Stylized Fleur De Lis Window which is also almost completed.  Look for these two windows to be in a spotlight position near the top of our next post.

Which brings us back to Shawn's address window which sort of started this post. Shawn has a big decision to make.   She 's thinking about adding another border to her Address Window but there's a size restriction so she's unsure if she should add more to this or not. Either way, she'll be soldering this before you know it.

And there you have it, everything that happened in our first class for the month of March.