Put Your Big Girl Panties On

Be comfortable, not contorted!  This is something I tell students two or three times a week when I see them reaching to the other side of their projects trying to see if something lines up or not.  Our first golden rule is to first cut point to point when cutting an inside curve, but our second most  important rule is that you should never work beyond the halfway point of your window.   Once you go beyond that point you should spin your project around so the area you are working on is closer to you thus enabling you to see exactly what you are doing!  You'll be surprised at how much time you save with this one simple tip.


So our first completed window of the week is Annette's Max The Dog.  Although Christmas is behind us Annette thinks she might very well hang this up for a while anyway.   Just in case you don't recognize him, Max is the dog that starred in How The Grinch Stole Christmas.  This window, along with her Grinch window, will surely make quite a statement during the 2020 Christmas season. 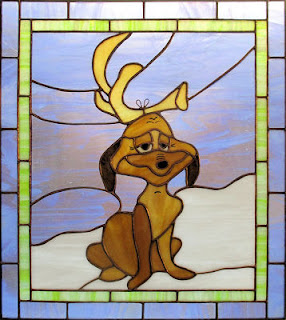 Next up we have Belinda's Church Window which was finished this week.   As you can see all of that hard work sure paid off.   The funny thing is that all of those thin white boards that make up the church weren't hard to do at all! The 'Love', 'Faith' and 'Hope' words were fired onto the glass that make the scrolls in our kiln and the finished result is nothing short of inspirational. 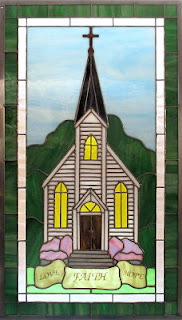 Kerry's Deer Window looks exactly as a deer should look which is a great compliment because I've seen some on the internet that need a label to let you know what you're looking at!  This is yet another stunning piece of work by Kerry. 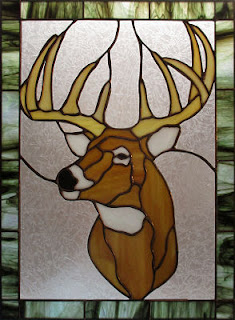 And Jeannette made another Wedding Invitation Plaque this week with colors completely different from the ones she used for her last wedding gift.   Although it's difficult to see in the picture, the glass she used for her border matches the flower on the invitation perfectly.  That color tie in is what really sells this design. 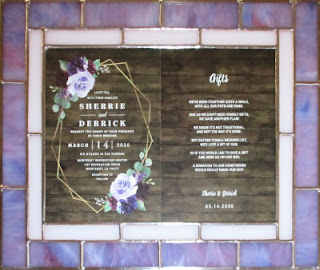 After completing her Max the Dog Window, Annette traced out and began cutting glass for her new window.   She wanted a Cross but we added to it so that it wouldn't just be 4 pieces of brown glass in a frame.   This cross is made up of three colors and features a Dove behind it almost in silhouette.  I may be wrong but I think we're going to be seeing a few more of these made over the next few months. 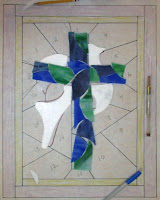 Meanwhile, Shawn is working on an Address Window with a background that will very closely match the background of the Cross Window that her mother is working on.  We're going to dive into the design esthetics of a 'fractured' background next week as our tip of the week. As for Shawn, well, she cut out all of her glass and even got half of it ground in just one night.  Way to go!

MiMi is working on three Suncatcher Birds and in just one class these have been cut, ground, and ready to be foiled.  The three of these are so perfectly matched that you'd almost swear that they were a kit.  Alas, only people who don't properly know how to do stained glass assume that other peoples' work came together starting life as a prefabbed kit.

I have to say that Jeannette's Coffee Pot Window looks fantastic!   When I drew this up I accidentally reversed the width and height measurements but Jeannette said she liked it so much that she was going to make it anyway.   So who knows, we may see another one of these running wider than taller later on down the line. 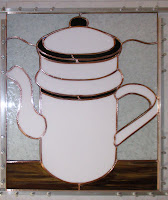 Lara's always on a roll so it should come as no surprise that she has her Flower Window completely cut out and ready for grinding.   Well, she hasn't cut six pieces of her stems yet but somehow the pattern pieces have turned up missing so we're going to deal with those a little later on. 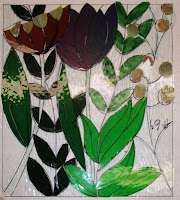 Ali the dog is completely ground and since Susan D had to drop on by the shop for more foil I'm thinking that when we see this again a lot of the pieces are going to be wrapped.   With the bulk of the work on this project behind her now, Susan will most likely finish this before you know it.

It's official.  Lisa is just 3 weeks into her first window and it's already been ground and set to be foiled.  She wrapped a few pieces before she left class and it's safe to say that she's got the foiling process pretty well worked out.  Most importantly she knows that if there's a foiling problem you just can't ignore it and I have seen her go the extra mile to re-wrap pieces to ensure nice and even foiling. 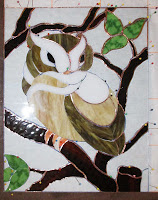 Melissa now has all of her inset pieces ground and even has the round circular insets wrapped which means that when she comes back into class she'll work on cutting them into place and then separate the remaining pieces that still need to be cut.   This isn't even finished and it looks spectacular already!

With the fruit bowl all cut and ground Jeanne L has moved along to cutting out the fruit for her window.   I've always found that to be the fun part of making this window because there aren't many set colors which allows you to run free with color placement.   Her fruit is almost completely cut out so I have no doubt that when Jeanne returns she's be working at the grinder again.

With just a small handful of background pieces left to cut for her Seafood Window, Susan R is coming close to adding a border and then soldering her piece de resistance!  This is close to finished now and all of her hard work is already shining through.

As you can see, Barbara H has been busy working on Dragonfly and Butterfly Flowerpot Decorations.   She's already got four Dragonflies cut and ground along with a Butterfly that is very close to fitting together.   She'll be tacking these onto small steel rods which will then be inserted into flower pots all throughout her patio.  And do you know what?  They also make GREAT gifts! 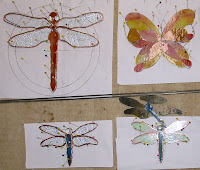 Jeanne M resumed the grinding process of her Easter Window and I have no doubt at all that she'll get this completed in time for the holiday.  The only pieces she has left to grind are the cross and some of the background.   Once that's done she can come in, relax, and take her time wrapping all of these glass pieces.

Lastly we look at Martha's Clear Flowing Textures Window.   She's begun soldering the front side already and has taken it home with the hopes of getting more of it soldered before coming back into class.   Even if she doesn't get the soldering done at home there's a very good chance that this will be completed upon her return.

And there you have it.  Come back next week when we look at newly completed projects as well as newly started ones as well!