Water your grinder frequently.  I often tell students to add water to the grinder and have them tell me that they already did when class started.  Water gets used fairly quickly as it sprays off of the spinning head and also coats each piece of glass that you are grinding.  You lose water every time you remove a piece of glass from the grinder so it doesn't take long for the level of water to drop  below its optimal level.  Your grinder head will last far longer if you maintain water in your grinder.   Any time you see a powdery build up as you grind a piece of glass, add water!

Speaking of water, Shawn's Octagon Diver Window really made a splash in class because everyone who saw it loved it. The iridised blue that she used gives the water a shimmery, pinkish tint that doesn't distract from the subject matter but actually turns your head towards it.  What's not to like about this? 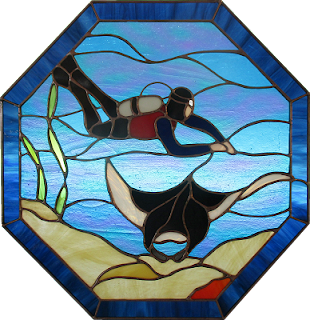 Cindy's newest Pelican Window was also completed and it all came together perfectly.  She was very insistent on getting the border, the beak, and the rope to be a specific color which slowed down her progress on this by one week, but in the end it was well worth the wait.  Cindy's happy with the finished result and we can all agree that it's gorgeous. 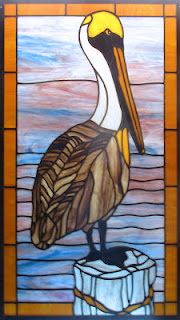 Betty did a small redesign on her first version of her Pair of Cardinals Hoop design by raising the Cardinals and having them perched on a branch.   She has two more of these under construction so keep an eye out for at least two more of these lovely Hoops. 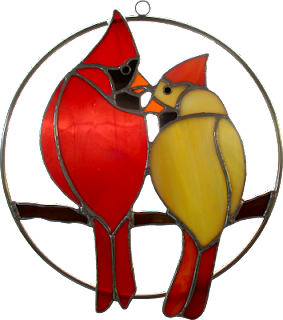 Cindy also finished up the work on her lavender Cross Suncatcher.  Getting the lead in the center to look symmetrical because of all of those lines joining into one point was a bit difficult but she accomplished it.  The next time she makes this I'd recommend putting a jewel in the center to alleviate the possible 'problem'. 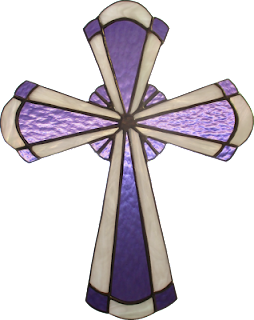 Next up we look at Linda F's rendition of the Flag/Heart Hoop.  Soft curving lines enable the perimeter of this heart to line up and join seamlessly into one flowing curve.  That's the kind of detail I like to see in projects with opened edges. 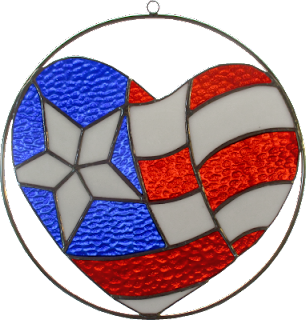 Our 'other' Linda, Linda L finished six of these flower angels complete with wire halos which double as hangers.  These look best when supported by a piece if ribbon looped through the halo and that is exactly what Linda plans to do with these when she gets home. 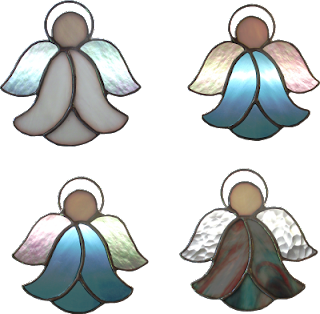 Bee has been VERY busy working on her Flowerpot Window.  As you can see she's got about half of it cut out already and next week we'll surely see more of the plants and flowers come to life as she adds even more colorful glass to this project.

Barbara H has begun work on a large Beveled Window.   She wanted to make something similar to another Beveled Window that she made long ago but the size just didn't work out at all.   The first window was very small and when we put the bevel cluster into this opening it just got lost with far too much empty space both above and below it.  In the end we assembled this faux bevel cluster out of stock bevels.   We still need lines to make some of the cuts possible in the center of the window but there are so may different ways to split the glass that I'm going to show Barbara a few photoshopped pictures to help her decide which way she might want to go.  More on that next week. 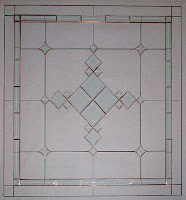 Lara has begun work on a Caduceus Window and in just one class she managed to get everything but the borders cut ground and mostly wrapped.  I have a sneaking suspicion that this might very well be completed when she comes back in! 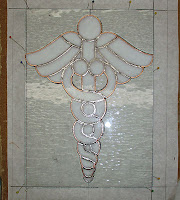 Sheri's Yippie Flag is really coming together quickly because she cut it out in the most efficient manor.  Instead of cutting 66 individual leaf sections that would each need to be ground to fit correctly next to each other Sheri simply cut and ground five individual leaves.  Once that was done she cut each leaf into its individual sections which meant that she only had to skim each piece to get things fitting back together easily and perfectly.   We'll dive deeper into this method as a tip in one of our future posts. 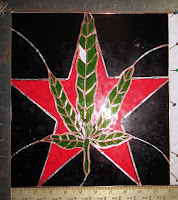 This Lady in a Bathtub started off life as a hoop design but Susan R is going to make it a full fledged circular window because she has a background glass that she really wants to use on it.   I have to say that it doesn't matter what surrounds this be it a hoop or a piece of channel-- it's going to look amazing no matter what because of those incredible curtains! 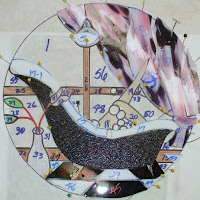 Melissa is back and her Butterfly and Iris Window is really taking shape now.  The Iris is still a bit sketchy but trust me-- when it's ground and pinned down to the pattern you'll have no problem realizing what it is. Look at how nice and symmetrical her Butterfly's wings are even though they haven't even been completely ground yet.   That's the kind of detail that I like to see. 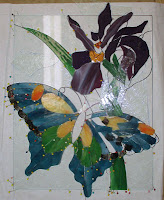 Susan D has already got the Christmas Spirit as you can see by looking at the work she's managed to accomplish on her three Swirling Christmas Trees and her two Beveled Ornaments.   She also has an unknown number of Angels cut out and stashed away in the trunk of her car (which isn't actually nearly as bad as it sounds).

Everything has been cut, ground, wrapped and tacked together on Annette's Crow Window. Alas, the pièce de résistance of this piece isn't visible in the picture below!!  I went ahead a suggested that she make the eye of the crow red and Melissa liked the idea as well so I cut the smallest sliver of a most brilliant red piece of glass for the eye and it looks marvelous!  It's the only hint of color in this window and it was cut from the brightest, boldest glass imaginable but it's only an eighth inch wide by a sixteenth inch tall.  Although it's easy to miss it does manage to speak volumes when you finally notice it.

I don't have to tell you that Linda F is well along on her Single Sunflower Window because you can clearly see that for yourself.   She not only has it cut and ground but she's got the majority of it wrapped in copper foil as well.   She's making quick work of this summery project, that's for sure. 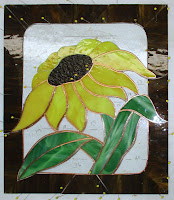 Martha has feathers on her mind as she ground six more of these colorful suncatchers and even wrapped and tacked four of them together.   I think these will all be completed upon her return to class next week because Martha is on a roll here!

And in the end we look at this Nicholls Logo which is being brought to you by Cindy who does quality work both quickly and efficiently!  Order before midnight and get free shipping!