Foiling is a very important part of making a stained glass window.   Often I see students rush through the foiling process without regard to how it looks because they feel the lead will cover it.  This is truer than you might believe.  Lead follows your foil perfectly.  Any flaws that you have in your foil show up in the lead as well.

Below we have a picture with two large problem areas.  The red arrow points to a stair-step which happens when the starting and ending points of your foil don't line up correctly.   Any lead that you apply on top of the stair-step will take the same shape.  It won't hide the problem.   Next, the green arrow points to a section of foil that has been flipped upside down so that the adhesive side is upward rather than against the glass.  I've used black backed foil so you can easily see that the black back side of the foil is facing upward.  This often happens in corners if you aren't careful enough to tuck one side of the foil under the next side as you would wrap a Christmas present. 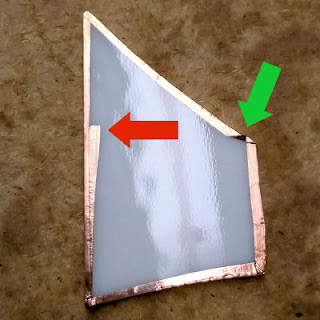 Here's how to fix these problems.  First off we need a SHARP razor knife or Exacto knife to trim off that offensive stair-step.   To do that we start at the large overhanging area by butting the blade against the foil we want to match and then traveling downward along the dotted line I've added to the picture.  Once the stair-step is removed you can simply use your fingernail in the upper right of the piece to flip the small area of tape so the back side is facing downward.  If you can see the adhesive side of the foil no lead will cover it. 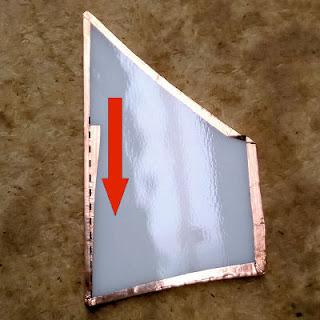 Remember, solder will not hide bad foiling but instead highlight any and all of your problem areas.  Your soldering will only ever be as good as your foiling so foil carefully.

So first off we look at Lara's Caduceus Window which was completed in just 2 weeks from start to finish.   Now we did rush a bit on this but in the end you can't tell at all because Lara's attention to detail outweighed Lara's need for speed.  When she asked what color would work well as an accent border with all of that white in the center I knew instantly that blue was the answer-- especially when she said that the window was being made for a man.  Perfection. 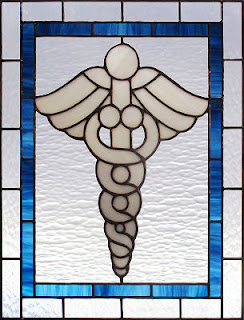 Lisa was unfortunately skipped over last week due to a filing error on my part so this week you get to see her four seemingly instantaneously created Frog Nightlights all finished and ready to illuminate!   For your viewing pleasure I've included a shot of one of the Frogs all lit up and perched on its nightlight stand.   The other three will be attached to nightlights of their own when Lisa gets home. 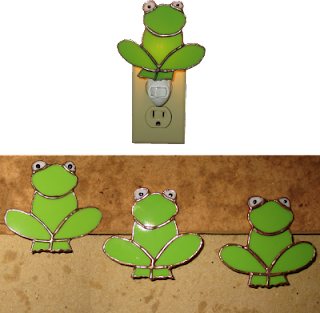 Peace out man.  Sheri should be able to sell these far out Peace Hands for a cool amount of dough and stick it to the man by bringing in some bread on the side.  And the colors, wow, they're totally trippy and psychedelic!  There's a whole vibe here that really blows my mind. Right on, dude, dig it if you can. Oh, and keep on truckin'! 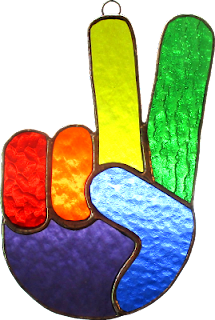 Mary Grace completed her 3D Diamond Spinner which I discovered is somewhat difficult to photograph.   Still, I think you get the idea.  If you looked at this piece the from the top you'd see something that looks like +.   Interestingly enough, even though we didn't plan  for a specific item to hang from the center, the crystals that Mary Grace brought it fit inside it like a glove! 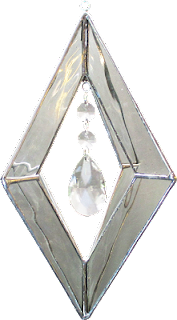 Betty knocked out another pair of Cardinals Hoop and then made another Heart Sunflower as well.  Look at that nice flowing line that makes up the curve of the heart shape of the Sunflower.   That's attention to detail and we're going to get into that as a tip of the week soon enough. 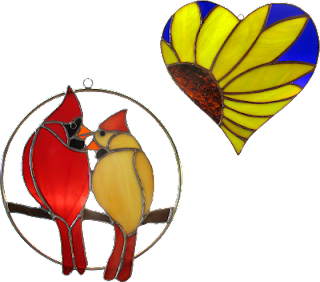 With just 42 days left to go until Christmas arrives Susan D is working feverishly on her Christmas Tree Suncatchers to get them out in time for the holidays.  You know what they say don't you?  Slow and steady wins the sleigh race! 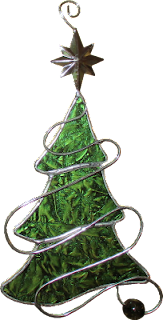 Martha made enough Feathers this week to make it look like my back yard when one of the chickens begin to molt. Alas, these feathers are far more colorful and fun to look at and Martha made them all in the best way possible:  first she cut out ALL of the feathers, hen she ground ALL of the feathers and finally she soldered ALL of the feathers.   When making more than one item you should always cut everything at once.   Trust me when I say that cutting out the first one, then grinding it, then wrapping it, finally soldering it and them moving along to cutting out a second one is sooooo VERY much slower! 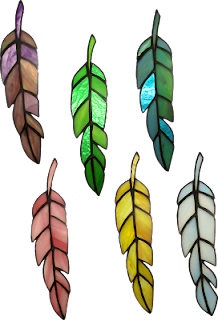 Now this is what Lisa's four frogs looked like when she left class last week.   She had managed to get them all cut and ground (all at once) and then took them home to wrap in foil.   This week we saw her solder them all and attach them to their nightlight bases.    Showing you this picture in this postafter you've already seen them completed is my way of saying 'Better late than never.'  Right? 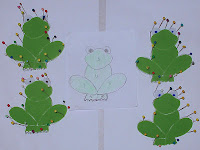 Linda L has been very busy cutting and grinding two Angel Panels (that she cut all at once) and she's gotten quite far along in the process just two weeks into this.  If you look closely you'll see that the blue Angel is about halfway ground.   Those wings make for a lot of deep grinds but they don't appear to be slowing Linda down at all.

Cindy finished cutting and grinding her Nicholl's Logo Panel and at this point I'm unsure if she's going to add a border to surround this or not.  I guess it all depends on how large she wants it to be.  Normally I say a border is necessary mainly for hanging purposes but the N creates lead lines at nice even intervals where we can attach hooks if Cindy chooses to forgo a border. 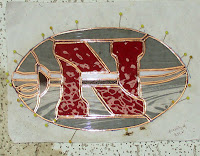 Jan is back and she's got her American Flag Eagle window all cut out and ready to be ground. Unfortunate circumstances have forced her to change out the glass that forms the white stripes of her flag but in the end I think that the finished window will look better for it. 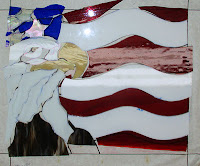 Shelly began work on a Cat Window with a twist.  Or should I say a lack of a twist because there is not a single curved line in the entire window.  But as I type this I realize that the noses of these 3 squared off cats will be somewhat heart shape.  I guess we'll see what this becomes in the weeks to come! 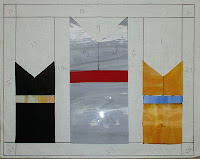 Unlike Shelley's Window, curved lines abound in Tracey's newest Magnolia Window which she began cutting glass for while in class this week.   Tracey's made this before and each time she makes it it comes out a little bit better than the last one.  And since her work is always perfection just imagine how good this is going took by the time it's completed. 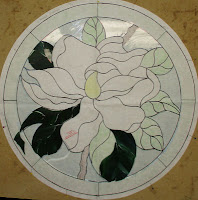 Susan R's Bathtub Lady has really taken shape this week as a lot of the bottom area and the tub has been ground.  I've always loved this window and Susan has inspired me to make it again but in a new way.  Meanwhile, don't you just love those curtains!  This is a popular pattern for a reason and Susan's rendition of it will only help make it even more popular. 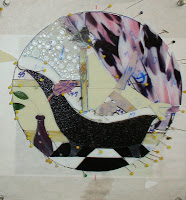 Mary got the lion's share of the grinding done on her 'Dueling Hummingbirds' Suncatcher while she was in this week and now she'll wrap everything in copper foil and then tack it together before fitting in the clear glass background pieces that will give this beautiful Hummingbird project some extra stability.

Susan D has two more Christmas Tree's and four more Beveled Ornaments left to go before calling it a wrap on the assorted Christmas Ornaments that she's been busy assembling.   I think we'll be seeing these completed very soon now as most of the work is finished on these. 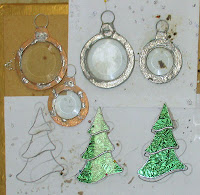 With all but four pieces ground for her Butterfly and Louisiana Iris Window, Melissa is almost ready to begin foiling.   There are still a few cuts to make to form the Butterfly's Antennas but they're go quickly and won't slow down the final glass cutting step where she adds a border to this stunning window. 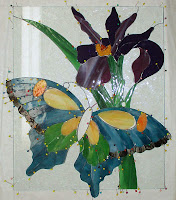 With her background all cut and ground for her large clear Beveled Window Barbara has taken her pieces home so she can wrap them in foil and get this tacked together upon her return.   She's thinking that she might add one more texture to this design in the rounded sections in the center part of the design but we'll see what happens next week when this is tacked together. and we can see the window a lot more clearly out of our mind's eye and into our real eyes. 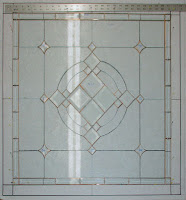 Sheri has one Yippie Flag completely tacked together and ready for solder while the second one only needs to get it's leaves pin striped.   She's really flown through the cutting and grinding of these two windows and it looks like she'll be completing them before you know it.  I have a sneaking suspicion that one of these will be completed when we see Sheri next week.

Mary Grace has turned her artistic eye towards her newest Humming Bird Hoop design and has decided to change the shape of the leaves to something a little more curvy.   We'll see what they look like when she resumes work on this piece next week.   Meanwhile she also cut out two Heart Suncatchers that you can see to the left of the picture, one in pink and the other in a flamingo.

And in the end all I can say is that all's well that ends well so I'm outa here!
Paul
Bayou Salé GlassWorks