I Shouldn't Have Licked That

I see students often break glass because they shoot for too much at once.   Remember that glass wants to break in a straight line and the more you make your score line wobble back and forth, the better the chance of it breaking incorrectly.  I see this happen all the time when students make our popular hand mirror pattern.   I've simplified the problematic piece for this example but I still think that many students will recognize where this piece came from.

The image on the left is what we are trying to cut and the red line on the right shows the score line that most students try to make.  It's a bad choice.   All of those compound curves are bound to send the break careening off in an undesired direction.  Instead of making it all in one cut we need to break it down into smaller, easier sections. 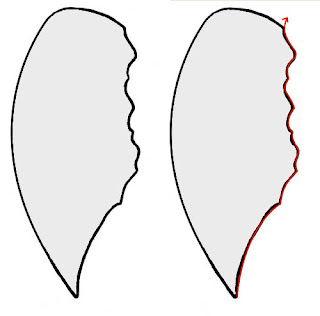 In the image below the red line on the leftmost image is the first cut that you should make.  It's still one long cut but there's nothing sudden about the curves and when you really look at it you'll see that it's essentially two straight lines with a slight curve in the center.   How did we come up with the shape for this cut?  Well, the first rule to cutting an inside curve is cutting point to point.   That's what the long red line on the left does.  We are simply cutting from one outside curve to the next outside curve in a long single continuous line.   This gets rid of a lot of excess glass and helps to ensure that all of the scallops we cut next will break on the score lines we are about to make.

The next step actually consists of eight separate cuts.  I call this 'scalloping' and it's amazing how many times you see this series of cuts appear in different windows.  Each scallop is its own inside curve so we want to take them one at a time.  You can either score all of the lines at once or break each score line as you make it.  Just follow the red and green lines and numbers on the right.  The big trick here is to recognize when you should break cuts up into smaller, simpler score lines. 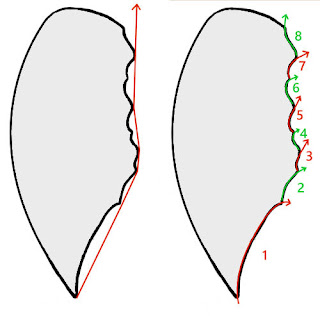 Now let's take a look at Susan's Spring Window which is an amazingly detailed piece of stained glass.  Measuring a mere 14 by 7 inches, the straight lines in the pieces that spell out the word 'Spring' are not even a quarter inch wide.  There are just so many flowers to look at in this pattern that I never even noticed the cardinal that resides in it until last week.  What a wonderful job Susan did on this! 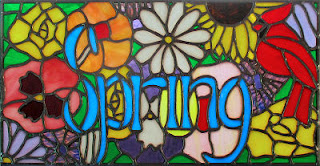 I've been saying for a while how nice Tracey's Hummingbird and Morning Glories window was going to turn out and, as always, I'm right again!  The crooked lines that make up the breaks in the background glass are, to me, the thing that make this look most like a classic L.C. Tiffany Window.  Tracey did marvelous work on this and her choice of colors are spot on! 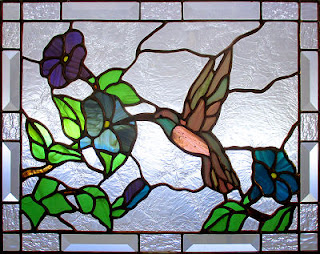 Kerry bucked traditional and instead of making his Stylized Fleur De Lis Window in assorted ambers he went with a blue color scheme.  The end result is not only stunning but wholly original as well.   People sometimes get too hung on on having perfectly matching colors throughout a window but this proves that you can take 4 similar shades of a single color and use them to make one heck of an eye catching piece of stained glass. 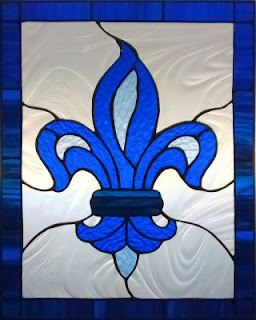 Susan R completed her two Stylized Sunflower Flower Pot Ornaments and I have to ask if I'm the only person who sees a 3D effect because of the angled yellow bars along the bottom right and left of this design?  It's a cool effect and it's truly what makes this a 'stylized' Sunflower rather than just a Sunflower.  I also like how Susan incorporated some unusual glass globs into the design.  That's even more 'stylization' right there. 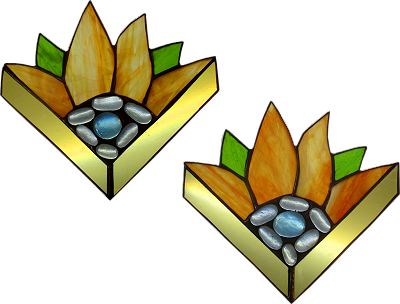 Barbara H's latest Small Iris Window is every bit as wonderful as the last one that she made.   The only difference is that this one is yellow rather than purple.  I love when students change things up and Barbara had no qualms about using a new color scheme for her latest iteration of what is now a classic window design. 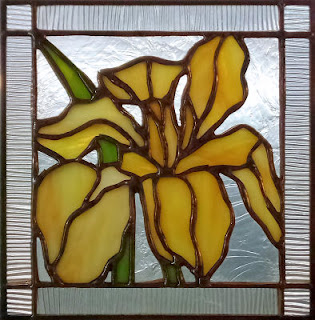 Linda F's newest Ladybug on a Leaf Panel is very different from her last one because it's a completely different pattern.   This one features wire work in the form of legs and antennae that really set it off in a wonderful way.   We know that because Linda showed everyone the window before the legs were attached and they loved it.  Then, after I mentioned that we still needed to add wires and finally got them attached everyone agreed that it made a world of a difference.  Obviously the ladybug is in the details! 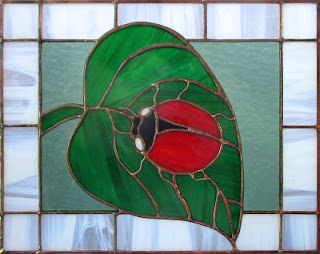 Linda L has two more Cardinals Suncatchers under her belt now and her cutting and grinding abilities appear to be at the very peak of Linda's zenith.  It just doesn't get any better than this. Or does it?  We'll see what else Linda is up to a little further on in this post. 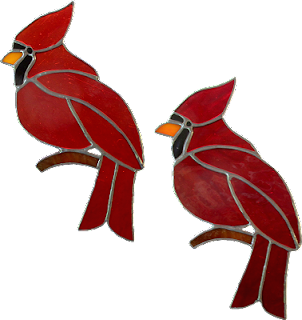 Lisa finished her four Art Nouveau type Nightlights and I have to show you what they look like lit up for you to really appreciate them.   Lisa is on a roll and loves to figure out things for herself.  Case in point,  I walked a way and came back expecting to show her how to attach the clips that hold the stained glass to the nightlight base but when I came back she had already attached them on her own.  Impressive! 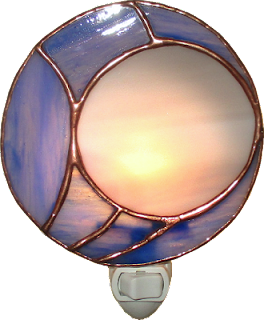 Here's a look at all four of Lisa's Nightlights (alas, they aren't lit up). 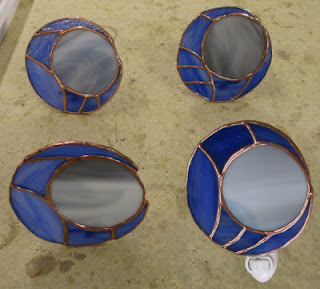 Pumpkins are back in style as Helen proves with her latest Pumpkin Suncatcher.  Helen works long and hard while at home during the week and seems to come into class with at least one completed project every week.   This is here latest. 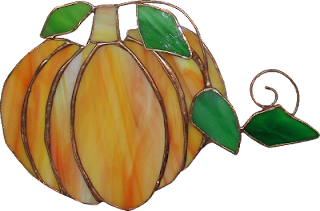 And here are Betty's four latest Crosses.   The bottom Cross was made from a single sheet of blue iridised glass which has a lot of pink running throughout it which doesn't really photograph very well.   Me, I really like the Cross on the right since it's made up of the most common colors used in church windows.   Although the effect wasn't made intentionally it stands out nicely to me. 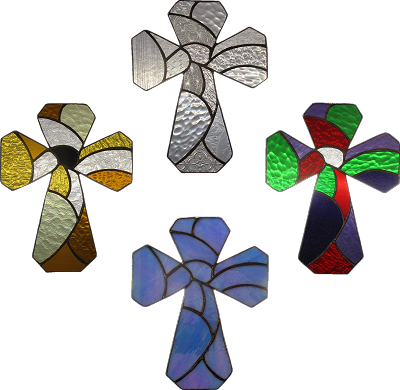 This week saw Annette get her Crow and Moon Window wrapped and ready to be tacked together.  The border for this only partially wraps around the subject matter which makes it a tad bit trickier to grind this window (which explains the pinned down yard sticks) but the end result will be well worth it. 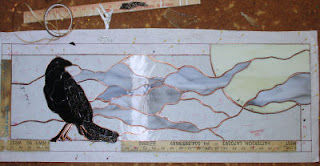 Sheri has begun work on two Yippie Flag Windows and she's already got them cut out (for the most part).   She's going to completely grind each of these windows after which she'll cut all of the details into the leaves which will make this window more detailed without having to deal with so many tiny pieces to grind. 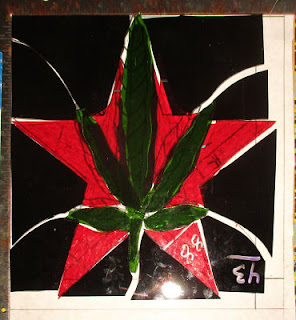 Betty also has two pairs of Cardinals cut out, ground, and tacked together.   She's going to mount these into hoops but wants them to reside mainly inside the hoops.   The previous version we saw of these Cardinals had the birds literally perched on the bottom of the hoop so in this application we're going to add a branch within the hoop so that the birds don't appear to be floating in mid air.  You can see how we've drawn in the branch on the left pair of Cardinals. 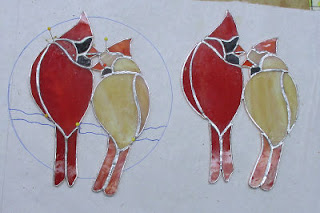 Cheryl got her Scales Of Justice Window all ground and it's now ready to be wrapped. One of the top pieces of background glass was ground a little too short but rather than re-cutting it she simply trimmed 1/8th of an inch from the tops of the four other pieces that reside along the top edge of the window.   Sometimes the easiest way to fix something is the less obvious way. 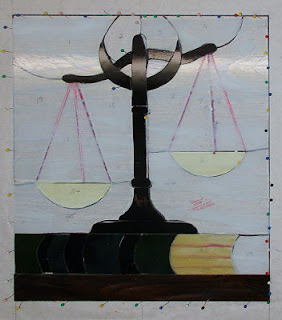 Linda L is working on a fleet of Flower Angels and she has all eight of them cut, ground and ready to be wrapped.  People always ask me why these are called Flower Angels and I always tell them to hold the angel upside down and look at it from that angle.  This is highlighted perfectly in the picture below since all but the bottom right two angels are upside down.  Also note the precision that Linda demonstrated while cutting and grinding these.  They look as though they were stamped out by a machine which again proves that Linda is at the top of her game. 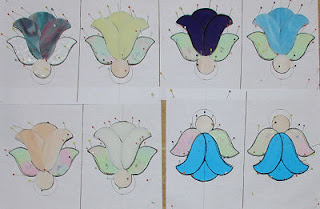 Bee decided to make a long Flowerpot Window but it needed to be a specific size.  Against all odds the pattern that she liked was the exact height that she needed it to be!  However, it was shy in width by about 6 inches.   To fix that she added another flower pot to the right hand side of the pattern and added another flower to it.  Problem solved!  I have to say that she did an excellent job adding that extra flower into the mix because it fits in beautifully without obviously repeating any of the others. 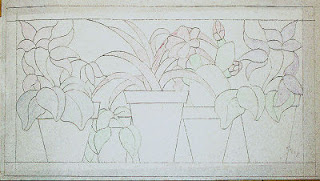 With the first side of her Pelican Window now completely cut out and soldered, Cindy will undoubtedly finish this upon her return. It doesn't take her long to put together these complex windows and when you see this again next week it will be lit up to reveal all of its splendor. 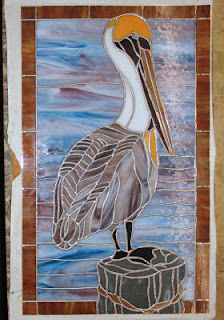 Judy's Wine Ladies Window will also be finished when we next see it again because, like Cindy's window, Judy has the front side of her window completely soldered as well.   Also, Judy has the second side soldered leaving only some touch up work left to do which will then be followed by some brass channel to protect the edges of this rather festive window. 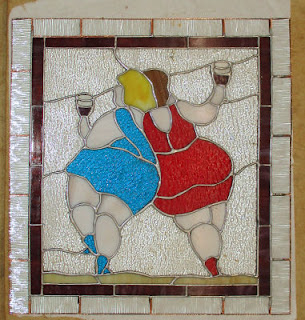 Linda F has her own version of the Heart/Flag Hoop just about ready to be put together.  These take very little time to solder and since Linda only has 7 pieces of glass left to wrap I'm thinking that she'll be working on something new when we see her again. It looks to me as though next week will be very busy with completed projects.   I really thought that Shawn would be taking this home with her this week but in the end we ran out of time just before adding some wire work and then washing and coloring this Scuba Window.  This will be finished next week for sure. 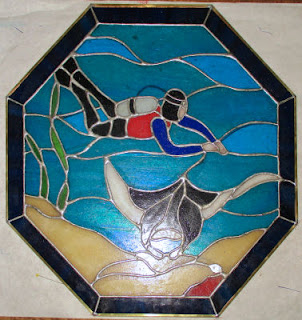 Mary proved to me that she really knows her stuff this week when she asked if it would be practical to grind and wrap her Dueling Hummingbird Suncatcher in sections so that things wouldn't shift around as much.   The answer was not just yes, but a very big YES!  She's got the center rose ground wrapped and tacked and will next move along to either of the hummingbirds when she returns.  It's all coming together now for Mary. 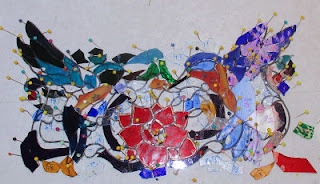 Lastly we have Mary Grace who is making a 3D Diamond Trinket Holder and has all 8 pieces cut out and matched perfectly.  It's so important that all 8 pieces are exact matches or they will not line up when she puts this together.   I understand that you have no clue what this will look like from the picture below but next week things will be readily apparent, mark my words. 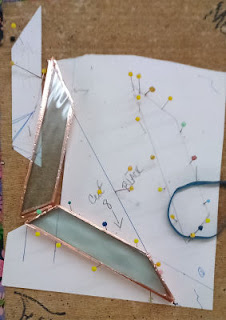 Yes, it was another busy week with a lot of projects being completed.  Things are moving along quickly and next week will be no exception so be sure to check back with us for our next update.
Paul
Bayou Salé GlassWorks