How Do You Please Three Women

Your Glass Cutter is a delicate instrument and far smaller than you might actually think.   It's the Cutter Wheel that does all the work by scoring the glass as it rolls over your glass.  This wheel is positioned in a slot an the bottom of your cutter which one of the red arrows is pointing to in the picture on the lower left.   As time goes by this slot will likely fill with grit and dirt which can stop your Cutting Wheel from spinning freely.   In the picture on the bottom right you can see that the slot on my cutter is completely clogged (you can't see through it) and needs to be cleaned. 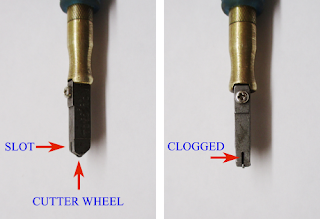 Cleaning your cutter takes less than 5 seconds.  Simply take one of the pins that you use to hold your glass pieces in place and gently push it into the slot behind the cutting wheel to force out any grit and grime that has accumulated there.  It may take a few pokes to clean it out but after you've made a few passes with the pin you will hopefully be able to see through the slot (as you can in the picture on the lower right).   If your cutter has a long oil wick you may not be able to see completely through the slot but you will still see a lot of dirt and debris come out.   Taking care of your cutter is an important part of stained glass crafting because you will only ever be as good as your tools are.   Also, remember to oil your cutter again after performing this procedure.  Just a single drop on the cutting head will do. 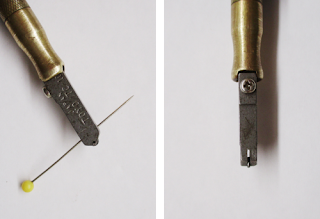 Now Melissa's Butterfly and Louisiana Iris Window was certainly worth the wait!  Her attention to detail may slow her down some but in the end that extra attention pays off in spades!  How can anyone say 'no' to a window as beautiful as this is? What impresses me most is Melissa's beautifully subtle blending of colors.  There's nothing harsh or super contrasting about it, it all just flows together. 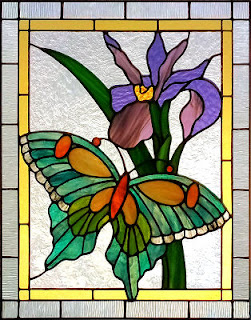 I have to say that adding that scrolling topper to this rounded version of the Bathtub Lady was a stroke of genius on Susan R's part.  She had a choice between either an Art Nouveau or Art Deco style but in the end the Nouveau version was easily the best choice for this stunning piece of art. 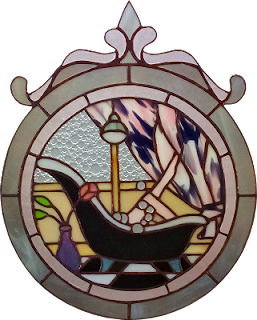 These adorable Boy and Girl Baby Suncatchers are the perfect gift for a newborn.  Mary Grace did a bang up job on these and I know that they will bring a smile to the new parents of the respective babies that these will be delivered to. 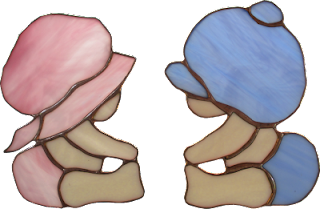 We haven't seen a Business Card Holder made in a while but when Sheri said that she needed to buy one I told her that she could easily make her own in well under a half hour.  A half an hour later she proved me correct.  The nice thing (that's hard to see) about this is that the color scheme of the holder completely matches Sheri's business cards!  That's called attention to detail. 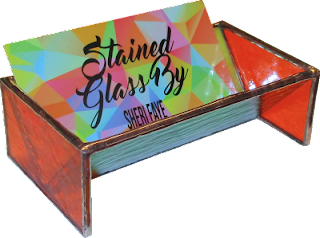 Here's the Angel Window that Linda L began working on last week.  Yep, it's been completed and she's ready to finish her next Angel using colors that SHE wants to use!  I have to say that I like this one though-- everything from the colors to the craftsmanship shows what Linda can accomplish in just a short amount of time. 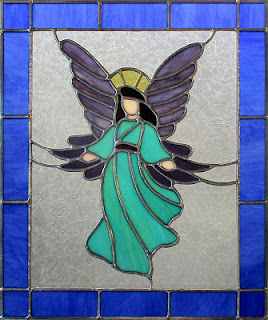 Ann came in knowing that she'd be soldering the five Ornaments that she had foiled last week and by the end of class they were soldered, washed, patinaed, washed, and finally waxed.  Once these were completed she began cutting out even more of them because, well, they just look THAT good! 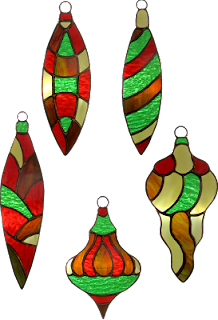 Betty actually had two more Cutlery Dragonflies completed this week but I only took a picture of one of them.   Of course she also finished her latest Beehive as well so yes, it's safe to say that Betty has been busy as a bee! 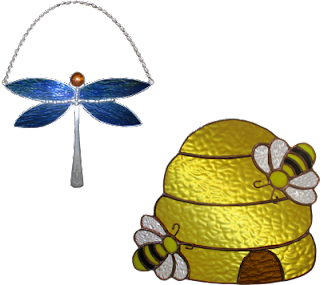 Shelley finished her Butterfly Suncatcher but opted to wash and color it at home.   Still, you can easily see how good this looked even when it's covered in flux and has no light behind it. 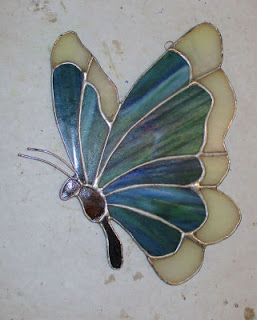 Who's been busy during the week between classes while at home?  Cindy!  This vehicle (I don't know the make of it but I will next week) has so much hidden detail in it only because it hasn't been wrapped yet.  Trust me, this one one VERY impressive window!

Annette has her newest Angel all ground and what a great job she did on it!  What I admire most is her ability to maintain symmetry in this piece which I usually have to adjust for students when they think they are finished grinding.  Balance in something like this is extremely important and this Angel is surely well balanced. 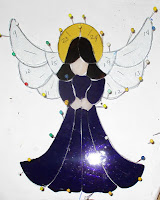 Sheri's begun work on a colorful  Abstract Face that reminds me of a colorful Tiki Statue even though I know that isn't what it is.   This piece is all about having fun with colors and I think that Sheri has succeeded in that respect while cutting glass for this project.

Kerry began a Parrot Window this week and it was almost completely ground by the time class was over.   There are only the yellow and upper red feathers left to grind and even in their un-ground state they look like they fit in place pretty darned well.  That means that there's only a little grinding left to go on this so perhaps this parrot will get its border attached when we next see it. 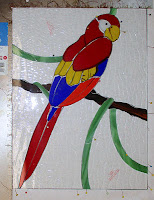 Mary decided to turn her Madonna and Child into a window rather than a suncatcher so after she tacked it together she added a background and then a border.   By the time class was over with she even had both side soldered which means that it only needs a brass channel attached to it to finish it off.  Consider this panel to be a done deal.

Jan's Holiday Windows each got their respective backgrounds cut and tacked into place.  Once that was accomplished she picked out borders for her two panels and now they're just about ready to be soldered.

Bee had a busy night as she ground her border, wrapped it, attacked it, added a large zinc channel to the window and then filled in the three missing pieces by placing glass under her window and tracing the perimeter of the opening onto the glass.  A quick cut and a skim on the grinder had the missing pieces fitting perfectly and once they were wrapped and tacked into place Bee began soldering.

Linda F finished cutting out her Stylized Cross and then spent some of her time grinding it and the rest of the class wrapping it.   It looks like there's only three pieces to go so Linda will most likely start something new when she comes back in next week because this is surely going to be finished. 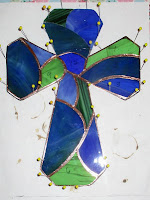 Ornament are everywhere.  Here's Susan's sextet of Beveled Christmas Tree Graces all ready to be soldered.  The end is neigh!

Shawn also got three more Christmas Ornament cut out while in class and she even has two of them ground already.  It looks as though she'll be applying foil to these when she comes back in.

Here's Linda L's third and final Angel.  She only needs to wrap her background pieces, add a border and then solder this to finish it.  That may sound like a lot to get done but trust me when I say that the lion's share of the work has been completed on this window and this Angel's end is near!  (oh dear!) 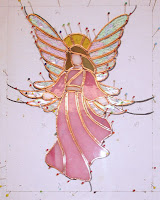 Speaking of the end being near, our lost picture shows us that Betty has at least five more Cutlery Dragonflies in the works which only need solder and chain attached so she can be finished with this batch.  There's never a dull minute for Betty.  Have glass, will cut! 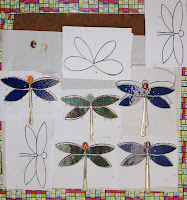 And there you have it!
Paul
Bayou Salé GlassWorks

Posted by Bayou Salé GlassWorks at 11:04 AM