The Ones With The Unruly Hair

We're jumping right on in this week starting with Linda L's first of two (possibly three) Angel Panels.  This one features a blue robe while her second angel (which you'll see later) has a pink robe.   She also has an order for one of these but the person wants different wings so Linda was just going to cut new wings and use what she already had cut out.  However, now he wants the dress to be changed as well.  We'll see if Linda decides to cut an entirely new window or if she just swaps out  the almost complete angel in the weeks to follow. 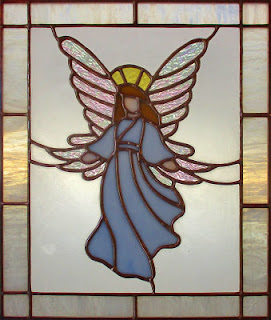 Sheri's completed her Moon Panel and luck was with her because she was able to find a piece of the dark blue rough roll at home that was big enough to repair the piece that broke in two last week.  After the quick fix Sheri ended up with this very peaceful and serene look at the nighttime sky. 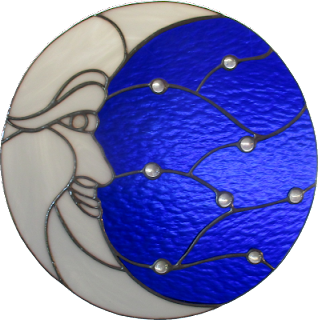 Kerry's Chessboard is off the work table and ready for a game of chess.   If you look at the corner of the board you can see how we angled the final border which actually raises it off the table by  almost 2 inches.  To support the center we added four pieces of glass that formed a 'box' of sorts directly in the center of the board.   Now it can certainly withstand even a cat jumping on top of it! 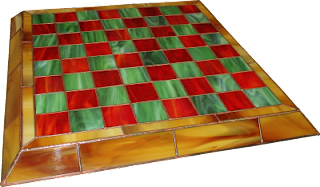 Linda L also finished these two Bluebird Flower Pot Ornaments.  True, she had cut out and ground them while she was at home during the week but she also got that blue angel up above soldered as well making this a VERY productive week for her. 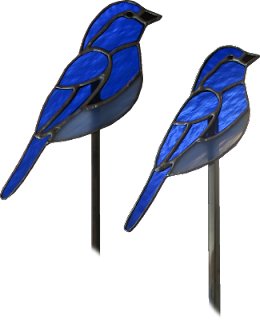 Betty found some old spoons and forks, cut off the utensil side of the cutlery using a hack saw, and then soldered the remaining handle to 4 wings and a round glass glob to make this unique Hanging Dragonfly.  When it was completed she didn't quite care for the look of it until I showed her how to attach solder balls to the joints which really set this off perfectly.  This is what decorative soldering is all about.  Expect to see more of these as the weeks go by! 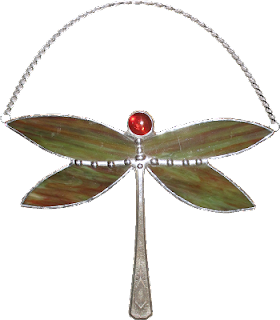 Jan's happy to tell you that her Eagle/Flag Window is finished.   I have to say that she did wonderful work on this and that it didn't take her nearly as long as she thinks it did.  Everything fits together wonderfully and her soldering on this is some of her finest work to date. 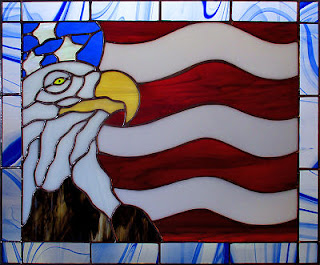 Tracey must surely have this Magnolia pattern memorized by now.   Her work is flawless and her glass choices are nothing short of perfection.   You can't lose with a classic design like this unless your workmanship is off and Tracey is, without a doubt, completely on her game when it comes to workmanship.  Don't you agree? 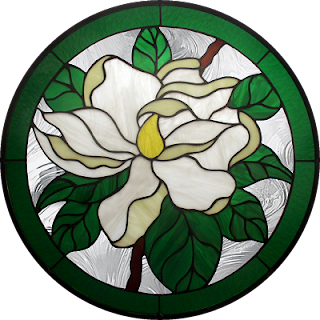 This is Annette's first of many Mary and Baby Jesus Suncatchers and what a start she's shown here!  This is actually a somewhat complex suncatcher since it deals with a round halo and the profile of a face, both of which are harder to achieve than you might believe. They say that practice makes perfect but Annette's first of this series is about as perfect as you can get. 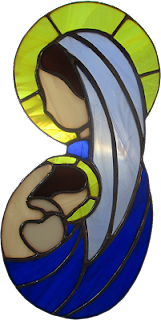 Shawn's got her second Christmas Ornament Suncatcher ready for her tree.   AT first she thought that she couldn't hang this in an actual Christmas Tree but surprise, surprise-- you can!  And if you position it in front of a light then it's even more the spectacular!

Cindy's got another Louisiana Football Tiger Eye in the works and she's flying through this project as fast as she can so that she can start working on a Corvette Window when she comes back in.  Her talents are very much in demand and Cindy doesn't disappoint. 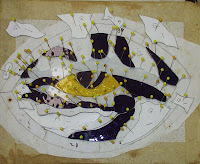 Do you know who else was VERY productive this week?  Jan!  First off she finished her Eagle/Flag Window (and was very happy about that) and then she moved on to this Santa Face and Halloween Witch.  Not bad at all!

Lara has the background for her Sunburst Window all cut and tacked and she's decided to finish this off using a beveled border.   Hmmm, I actually don't know if she plans on using one or two borders so perhaps the bevels won't actually 'finish' this off. We'll see when she returns next week.

With all of her glass ground for her Flower Pot Window, Bee has begun to wrap her glass.   If you look closely you'll see that she is actually missing two pieces.   These things happen, especially when working on a window with this many pieces.  Sometimes a paper pattern gets put in the wrong pile and either gets cut out of the wrong color or not cut out at all.  If you've discovered this after a lot of pieces have been ground (as in this case) it's best to just leave a hole in the window and then fill it in AFTER the window is tacked together by placing the glass you want to use under the window and tracing the outline of the opening onto the glass.  It's just much, much easier that way.  And that is what Bee will be doing with her two missing pieces.

Betty is working on a slew of Autumn Leaves as you can clearly see below.  Some of these will be used in a Leaf Wreath which will be very interesting since it's the first time one of these will be completed in our classes.   We'll see what that looks like next week! 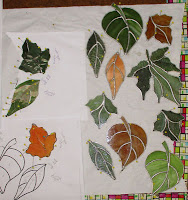 With the front of her Scales Of Justice Window all soldered and just the back side to go I'd say that Cheryl could very well complete this next week.  There isn't all that much left to go and she got the front side completed in one class so I think it's a pretty fair assumption. 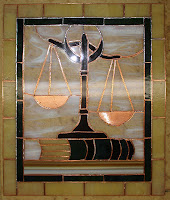 Judy's Louisiana Hot Sauce Window is very close to being completely cut out already.  She actually has a lot (if not all) of the gray mortar that goes between the bricks cut out but she put all of them in a bag for safe keeping just before I snapped this picture. 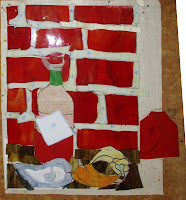 Linda F loved her last Butterfly Flower Pot Ornament so much that she has a second one cut and ground already.   Then she went ahead and cut and ground a new Beehive as well.   For the record, I looked up the word 'beehive' and suspect that since you readily find it spelled as both a single word AND a pair of words, it doesn't matter which way you spell it.  Just don't expect me to be consistent week to week!

This is the Pink Angel that Linda L is making.  As you can see it's almost completed already.  If she decides to change the wings and the dress she can simply re-cut the hair, hands and feet and turn this into a suncatcher.  We'll see what she plans on doing when she comes back in. 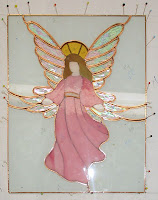 With the front side of her Round Bathtub Lady all soldered, Susan R flipped it around and began soldering the back side.  What I completely forgot was that she wanted to add a decorative top to hang this from.  I have two ideas and we'll see which one that Susan decides to go with when she returns. 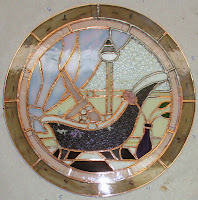 With both of her borders attached Melissa has begun soldering her Butterfly and Louisiana Iris Window.  Even though she says that this has taken her forever to make I think that she's just being hard on herself.  The end is near and it's looking VERY good! 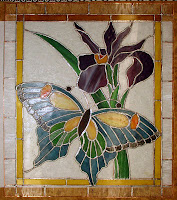 Here's a closeup of MiMi's latest Cabinet Insert.   That line that you see running down the right side of the window is a stopping point for either an insert that she's already finished or one that she needs to make yet.   The beauty of this pattern is that if you make one large pattern (as MiMi did)  you can just draw a line to show where each insert needs to stop.  You don't need to retrace all of those Hexagons to create separate patterns for each window. 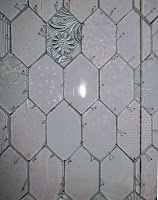 Next we see that Susan's on a roll with her Christmas Ornament Suncatchers.  It looks to me as though she's almost completely ground eight more of them this week. Apparently she can't make these fast enough!

Shelley is a bit in between projects so she decided to make a quick Butterfly Lawn Ornament while she hammers out a mermaid pattern of her own design.  Her Butterfly is all cut and it's all ground which means that this will certainly be finished when we next see it again. 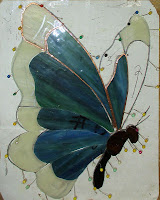 Look, it's another Beehive and this one is being made by Sheri.  She's using assorted ambers for her version of what is quickly become one of our most popular patterns. 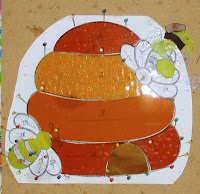 And that's if for this week.   I never considered what our tip of the week should be for this post so I kind of got caught off guard, especially since I was thinking that Sunday was actually Saturday which means that I sort of lost a day during the weekend!  That's never good, but even though we don't have a tip this week, we're still on time.
Paul
Bayou Salé GlassWorks