No Romance With Vinegar

Having your foil split when you are foiling a deep inside curve is a common problem.  You can't always prevent it from happening  but you can minimize it by following a few simple rules.  First, after foiling the entire piece fold down the foil on all other sides leaving the curve for last.   Next SLOWLY start bending the foiling along the curve on one side and then switch to the other side doing the same  Don't try to force it over the sides in one shot.   Switch back to the front side and SLOWLY fold it downward  even closer to the glass repeating again on the back side.  Continue slowly alternating on both sides until the foil is flush with the glass.

In short, if you try to fold the foil onto the top and bottom of the glass in one push your foil will almost always split.  You need to SLOWLY stretch it along  the curve of the glass in multiple passes.

That said, another trick that works wonderfully is to use a thinner foil on any pieces with an inner curve.  You still need to coax it along the curve but in the example below I simply folded it over with no splitting happening at all.   The red arrows point to splits where I used 7/32 foil but on the right side  there are no splits at all largely due to the fact that I used 3/16 foil (which is slightly thinner) on that piece. 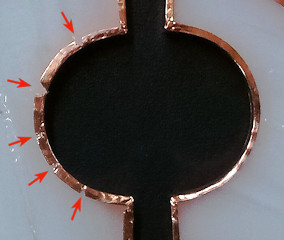 So then, first up we have Barbara's Beveled Window hanging up and looking oh so good.  She really likes using baroque glass for her background and you can see just how wonderfully it offsets the bevel cluster that she's used.  Perfection! 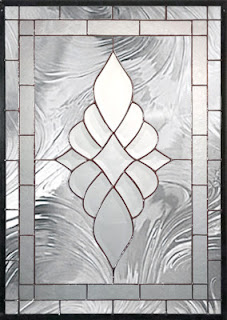 next we have Cindy who made this fancy Circular Fleur De Lis panel while she was supposedly taking it easy after her operation.   She's moving pretty well and her latest project moved along just as well since it went from the planning stage to a completed window before Cindy even made it back into class! 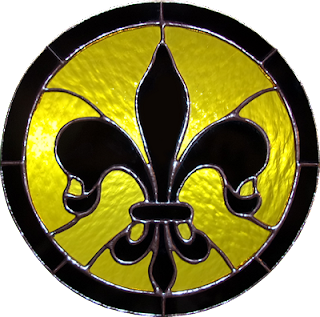 Now here's something new: a Minnie Mouse Hand Mirror that Kerry made in just one class.  I have a sneaking suspicion that we'll be seeing one or two more of these in the weeks to come.  What a great find! 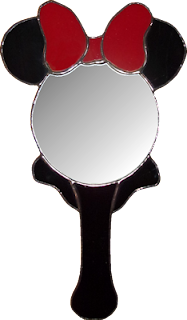 Whenever we see a Butterfly posted we can almost certainly expect to meet a new student.  Let is her name and stained glass is her game.  She had no problem making this at all and next week she's going to be starting a Santa Window.  Even if it comes out half as good as her butterfly did she'll be VERY pleased because her butterfly is perfect. 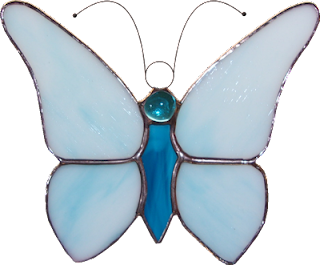 Linda L put the finishing touches on her four Flower Pot Ornaments and if I can only say one thing about them it will be that the glass she used for her Frog is perfect!  That mottled green glass works perfectly for so many different things but a frog is probably what it's best used for. 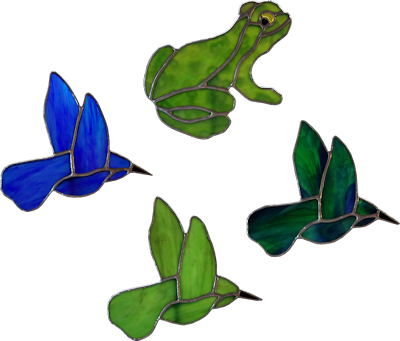 I've seen Rose Hearts made here and there but the rose is always so very plain that I decided to draw one up of my own.  There's a slight chance that I might have gone a little overboard and I've decided that I want to change the shape of the leave on the left but all in all I'm still happy with my first rendition of this Valentine Heart/Rose Suncatcher. 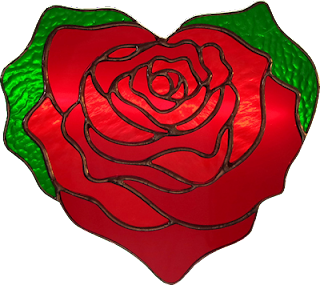 Ka is the will of Gan (roughly synonymous with destiny or fate).  It has been described as "a wheel whose only purpose is to turn."  Ka is not necessarily a force of good or evil, as it manipulates the powers of both and seems to have no definitive morality of its own.  If you've read Sai King's The Dark Tower series, you know and understand Ka.  This is its symbol and yes, I made this.   I'm sort of anxious to see if anyone recognizes it when we take it to our next show.  And if you think this is odd just wait until you see the Zelda/Link Window that I'm planning! 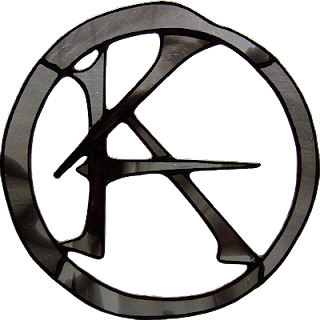 Susan D ordered some metal branches which she'll decorate with an assortment of stained glass birds (and leaves) that affix to the branches which in turn will mount along side windows in her house.   This cardinal is the first of many birds that Susan will be working on over the weeks to come.

Susan R is working on a Wine Hoop and she's got all of her glass cut and ground for it.    This project will involve some twisted wire so that will be fun to make and work with (save for the cleaning and tinning part).    This could very well begin going together upon Susan's return. 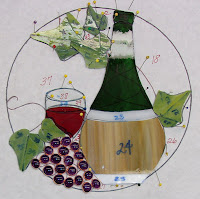 With the three subjects (a Sea Horse, and Anchor, and a Dolphin) all tacked together for her sailing themed tray, Cindy will soon begin cutting out the background glass that holds this all together.   The glass she wanted to use isn't manufactured anymore so Cindy got tossed a slight curve ball there but I'm sure we'll come up with something similar.

Lara's Palm Tree Sunset Window is coming together perfectly.   Her use of numerous similar colors is what makes this look so appealing.  She's gotten everything ground and all but the water was wrapped in foil before class ended.   I have no doubt that this will be tacked together when she returns and once that's done she'll be able to decide on her border(s).

Martha got her sky cut out and although there's a piece missing below that's only because she was foiling it when I snapped the picture.   This window perfectly illustrates  how , quickly, efficiently and accurately you can get  a background fitted into place when you cut the subject into it rather than cutting each piece individually from random spots on a sheet of glass.   It means that the flow of the sky in this window is never broken. 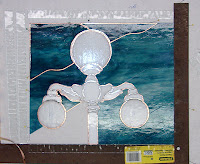 Ann has another large Cross Suncatcher well under way and by now she can make these with her eyes closed.  She had a small amount of trouble with the missing bottom piece but that will be replaced when we see this again next week.  Look out because this piece is well under way to be finished. 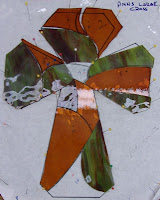 With all of the glass ground for her newest Hexagon Window, MiMi hopes to have this all wrapped and ready to be tacked, channeled, and soldered upon her return.   I have no doubt that will happen because MiMi is on a mission with these inserts! 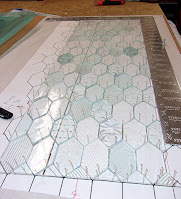 Up next we look at the Beach Scene Pattern that Linda L is about to embark on.  Tranquil water, a rising (setting?) sun which offsets two palms and a cute little crab.  Linda will be making at least two of these nearly identical windows with one exception-- the crab will only be in one of them. 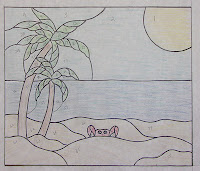 Lastly we look at the pattern that Sheri traced out and will begin cutting out glass for upon her return.   Next week will be here quicker than you think and we hope you come back to see how far Sheri and everyone else gets on their projects. 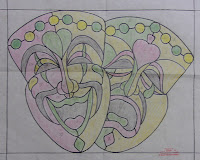