Put Your Beak On, Big Daddy

If you are having difficulty getting your foil to stick onto your glass pieces  you may very well want to try washing your glass.  Just dipping the piece in water and drying it off (thoroughly) can go a long way to getting the foil to adhere securely to your glass.  I do this any time There's been more than 2 weeks between my grinding the piece and wrapping it.

Okay then, first up we look at  Betty's Mardi Gras Jester which is a large suncatcher that captures that Mardi Gras feeling perfectly with its bright colors and mirthful design.  This is yet another great piece by Betty but let's face it-- we always know we can expect that from her! 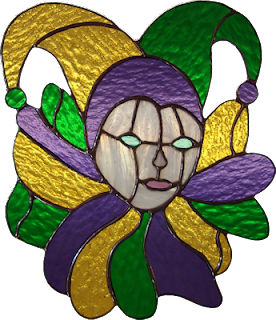 Steve's Karate Crane showcases how simplicity can still create an incredibly moving piece of art. With only eight pieces of glass along with a small amount of twisted wire Steve has created a chef-d'oeuvre that looks far more delicate than it really is.  That's all because of the great construction that Steve put into this. 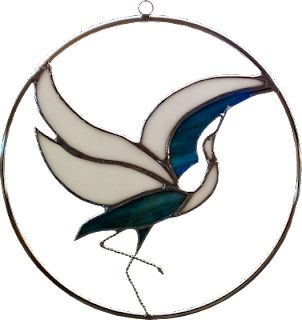 Judy's finished her Wedding Invitation Box which she started way back in 2021.  Actually this was her second week working on it and all she had left to do was make the bottom box section and then attach the lid that she had made the last time she was here.  As you can see it all went together perfectly. 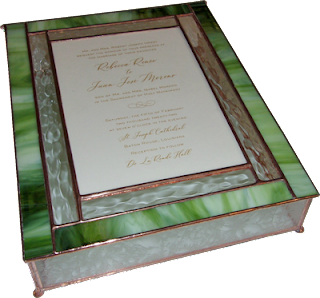 Well Cindy was as busy as can be during her 2 weeks off of classes.  Let's start the tour of her completed pieces by checking out the two Heart Suncatchers that she put together. 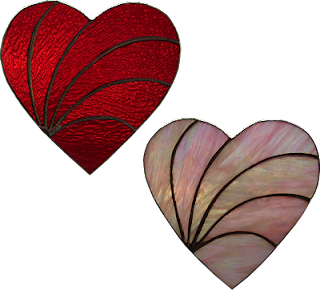 Next we look at two crosses that Cindy made using only clear textures along with some iridised glass. 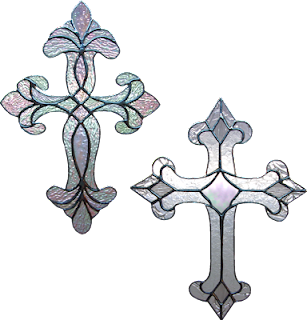 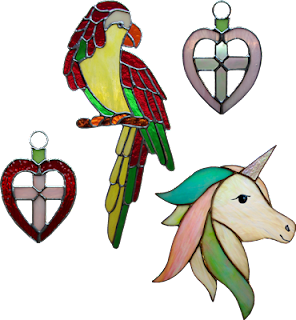 Next up we have Shawn who wrapped up the work on her last Christmas Ornament of 2021.   I'm not sure what she's making next but I'm fairly sure that it won't have anything to do with Christmas.  Great job on this BTW. Speaking of final Christmas Ornaments, Mary finished and took home the pair she had been working on.  The one on the right came from the same pattern that Shawn (up above) used and even utilizes the same colors, just with a different color placement. 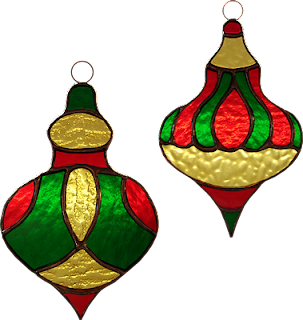 And now we're at the part where we check out the projects that are still under construction.  Let's start with June's Airplane project.  This is her first full sized window and she's moving along wonderfully.  All of the background has been cut which means that when she comes back in she'll start cutting out the actual airplane itself. The propellers and the struts will be added after this has been ground. 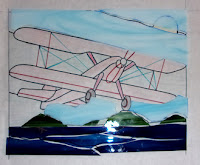 Lisa's making a gorgeous Circular Tree design that will reside in a stand which will display this on a table top.   She's using bright vibrant colors all throughout this and her use of mixed greens for the tree is superb.  The red sun against an orange sky really set this off. 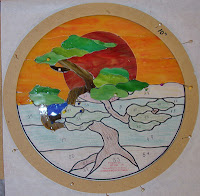 Speaking of reds and oranges, next up we look at the multi colored fish that Linda F is making and is almost finished with.  It doesn't take much time for her to knock something like this out.  Don't think that this is a suncatcher though-- it WILL become a panel next week when Linda cuts out the background glass for this. 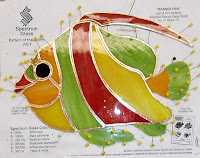 Next up we look at the Mardi Gras Fleur De Lis that Kerry is hard at work on.  Once his background was all cut and tacked together Kerry next assembled the bevel border that the alternating gold, green and purple border with fit next to.  As you can see they're already cut which means that Kerry has only 16 pieces of glass to grind into place before attaching his final border. 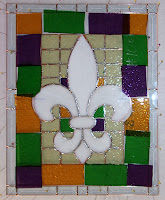 Let is moving along at an astounding pace on her first window.   She started this Santa Face last week (which means that she's the first person this year to begin working on Christmas items!) and she's already up to the first of her two borders.   She actually has the first one cut out and ground and has taken it home with her to foil over the weekend.   I have no doubt that she'll be soldering this upon her return. 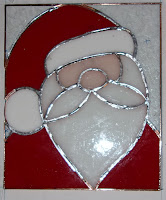 Sheri is also making quick work of her project.  This Double Mardi Gras Mask window is one of my favorite patterns and Sheri is MORE than doing it justice! I've considered making this myself and I have a feeling that once I see Sheri's version of it completed I will end up starting one of my own. 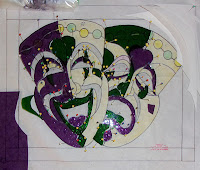 Susan R has all of her Hoop Wine Scene soldered and she even got the wire twisted for all of the wire work that this piece involves.  Next week that will be tacked into place and Susan will walk out the door with yet another completed project.  This already looks stupendous even before the wires are attached! 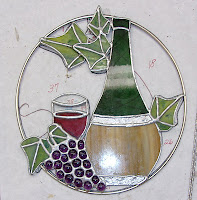 Next we have Susan D's Cardinal on a Branch  which is all tacked together and now just awaiting its final soldering.  I can't wait to see this get attached to it's lead branch and colored because I have never seen this done before.  Susan's going to teach an old Paul new tricks!

Cheryl has stopped working on her Fleur De Lis Window temporarily until she gets these three boxes completed.   It's all about priorities and as you might (or might not) be able to see she's got a wedding box started which usually means that there's a deadline involved.  Luckily boxes go quickly. 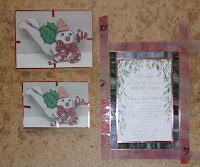 Lastly we look at the pattern that Ann will begin working on when she comes back in.  This week she got it all traced out onto poster board and worked out what colors will go where.  Join her seven days from now when we get to see her cutter hit the glass!

And there you have it.  In out next post we'll see a few new projects begun (that we haven't revealed yet).  And, of course,  we'll see some of the projects from this post turn into completed projects.  See you then!