Straight lines are (almost) always unsightly.  Unless your pattern consists of nothing but straight lines the lead lines that you add to make your background glass 'cut-able' should always follow the curves that they are connecting to.  There are four straight lines in the pattern below which are needed to allow you to efficiently cut out the pieces that make up the background glass surrounding the letter 'N'.   The problem here is that they are very distracting.  Those lines should continue to follow any of the curves that they originate from. 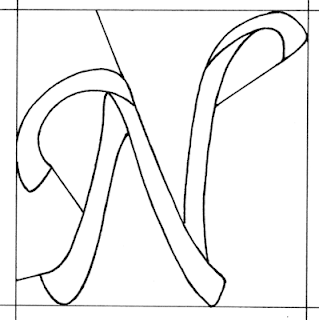 Just look at what a difference curving a few lines makes!  Do you see how three of those lines follow the curves that they originate from?  Also note that even though the line that runs to the top of the window comes off of a straight line, we've curved it as well.  Now the entire window flows effortlessly and gracefully.   Just remember that straight lines create harsh separations but curved lines make elegant transitions. 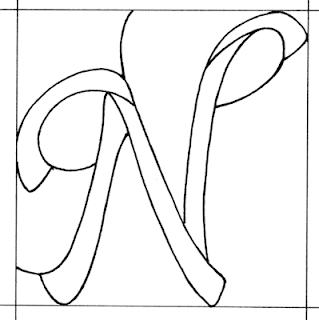 Mary's Circular Morning Glory and Butterfly Window came together very quickly yet you'd never suspect that when you look at how perfectly Mary managed to cut and grind this (in so little time).  Case in point:  Look at the leaf in the upper center/left  and follow the vine (the lead line) that travels through the unopened leaf.  Notice how it aligns perfectly with the line on the green piece that bisects it  Also note how smooth and graceful her curves are.  This is what makes a window great. 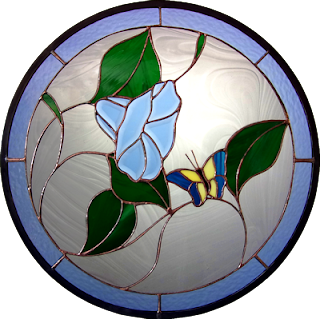 Steve's Cheshire Cat comes complete with a gold tooth!  I know this looks fairly straight forward to make but pay attention to how all of the pieces fit together so well save for the 'gaps' near the front teeth which are completely intentional and reveal spaces which give added depth to the mouth.  Very nice indeed!

Then there's Betty whose work always speaks for itself and this Owl is no exception.  Aside from telling you that her colors and craftsmanship are incredible what else is there to say?  If anyone can get the job done, it's Betty. 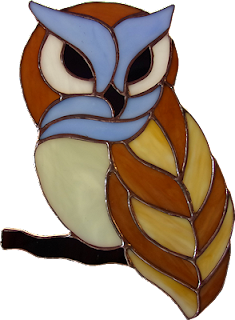 Susan R's Chocolate Hearts Suncatcher had a slight major problem that we fixed this week.  When I drew up that pattern for her I accidentally mirrored the design instead of rotating it.   I had no clue that I screwed it up until I looked that her project after she left last week and I saw that the repeating design was NOT repeating correctly.   This week we detached and flipped one of the hearts and then knocked off one the fourth heart and replaced it.   The end result is what you see here, completed and perfect in its design. I guess you could say that it's  a testament to Susan's craftsmanship that I didn't notice the problem until (luckily) the last possible minute! 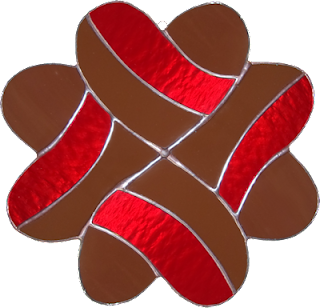 I had made this Rose/Heart a while back but I haven't had the space here to share it until this week when we have only a few completed projects.  If  I do this pattern again I'll simplify the Rose by removing about a quarter of the pieces that make it up.  In all honesty I love it as is but there's just so much work involved in making it that it's not very cost effective.  There's a 'size/number of pieces' ratio that  needs to be followed if you plan on making any money selling an item.  For this to sell you won't be able to get anything for the time it takes to make it.   Reducing the number of pieces in the rose won't change the amount of glass needed to make it but it would reduce the time it takes by half and therefore reduce the price to make it considerably. 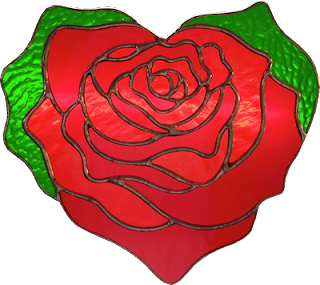 Lisa began working on a small panel that showcases a small cut glass bowl in the center of it.   She's got everything cut out and only has to grind and attach 8 small pieces before she can put the final solder bead on this and call it a finished project.   She talked about putting a border on this but looking at it I don't believe that it needs a border for it to be structurally sound or to hang from.  A border would purely be cosmetic on this window. 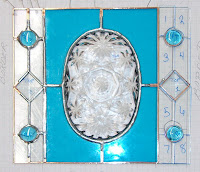 Robert has decided to make two Transom Windows each with an outer beveled border.  As regular readers know, we ONLY start with the border if it consists ONLY of bevels.  This way we can size everything else inward accordingly.   What you see below are the bevels that Robert foiled for both of his transoms.  Next week he'll pin down the first set of bevels and then work on cutting and attaching the thin inner red border that will reside within the bevels.

Jan's Old Fashioned Santa is getting so close now.  This week she cut out the green that forms the Tree that Santa is carrying.   You can see all of that green glass on her pattern on the right.   Once these are ground and wrapped we will place them on top of Santa, trace around them with a sharpie marker and then cut openings.  This will result in near perfect fits before the glass even goes over to the grinder.

In one of our biggest projects to date, Cindy is making an Address Window for the Lamp Lighter Coffeehouse & Bistro in Franklin, LA.   The window will feature the numbers 731 in the center which will be book ended by an antique Coffee Pot on the left and Coffee Grinder on the right.   The pot itself is almost completed as well as most of the glass for the numbers which means that in just one week Cindy has made IMPRESSIVE headway into this project!

Barbara has all of the glass cut for her Louisiana Iris Panel and this time around we're going to grind the flower without having the background cut it.   I think that this will be done more efficiently if we save those few background pieces for last and just trace the finished flower onto a piece of glass. 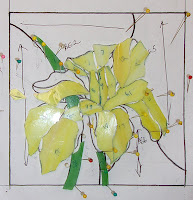 Now that her Mr Bingle Boxes have been completed Cheryl has resumed work on the Fleur De Lis Window that she started a few weeks ago.   She's undecided as to whether or not she'll follow this with a second border but I'm thinking that it's just fine as is.  In fact, if she doesn't add another border this may very well be completed upon her return. 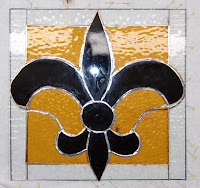 Next up we have two more Fleur De Lis' that Betty is working on.  Both were cut and ground while she was in class and she only needs to wrap these before she can solder them and finish them off.   These are a piece of cake for Betty to solder so I'm thinking that these will be completed when Betty makes it back.

Simple aesthetics can turn a nice window into an absolutely spectacular window.  The first piece of glass that Melissa has chosen for her Heron Window is already setting this project up to be something incredibly memorable.  She's using a sheet of purple and ice white stipple glass for her irises and even though she's using only one sheet of glass she's alternating the purple sections with the ice white sections to give her flowers an incredible amount of realism.  She's going to be making this window one section at a time and tacking things as she goes along so we'll be seeing almost instant results from week to week.

Meanwhile on another table in the same class as Melissa, Annette is busily working away at grinding the roses and leaves that make up her Transom Window.  There are only two more flowers left to go before Annette can begin wrapping these and then tack them together.  This is another window that will be done in sections. 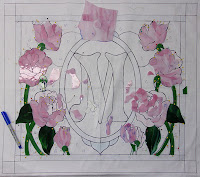 With only six pieces left to grind on her Lady Of Guadalupe Window, Ann is surely set to begin foiling her pieces when she comes back in.   You can make out the general feel of the window now that it's essential ground and fitting together but it's still hard to make out what's what without having the pieces wrapped in copper foil.   Once that's done you'll see far more definition than you see now.  That said, this is so nice that one of our other students have already asked about making it for herself.

Judy's got another Angel Suncatcher under way and due to the amount of pieces that make it up you may have already guessed that's it's larger than your normal suncatcher.  She wants to make at least one more of these but she also wants to cut back on the number of pieces in it.  That will be easy to do thus making this far more efficient to create. 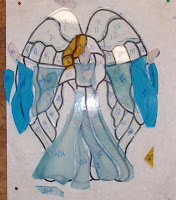 Sheri's Mardi Gras Masks are just about completely ground and these are easily shaping up to become yet another stunning window.  Sheri's eye for detail has grown in leaps and bounds and her work is flawless.  These two masks will surely be turning heads when they are completed and hanging in a window with some sunlight behind them. 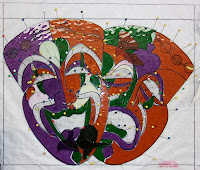 After getting the propellers and the four struts cut into the sky and wings June was able to wrap and then tack together the majority of her Plane Window.  Once that was done she picked out a color for the border, cut the strips out on our strip cutter, and then ground each of the border pieces.  She's taken those piece home with her to wrap so that she can immediately tack them into place and then begin soldering upon her return. 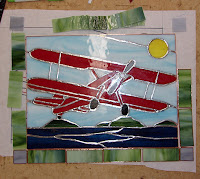 It's not four HLB Panels that Linda F has to make-- it's five!  Well, the good news is that she's essentially got four of them cut and ground already so it would appear that Linda has completely found her groove since she's moving through these like a hot knife through butter. Cool beans! 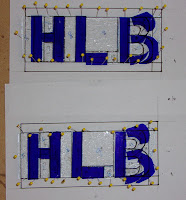 Linda is working on the first of her three Beach Scene Windows.   She's going to be mixing the leaves on her palm trees by using three different (yet similar) pieces of green within in frond.  To do this the easy way  she's cut three of each of the fronds out out three different green glasses.   When she cuts those fronds into their individual pieces she'll be able to mix and match them throughout her three windows.  She's planning ahead by doing it this way which means that in the end things will go far easier for her. 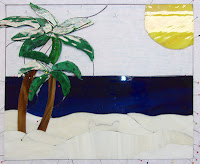 Martha's Yellow rose managed to grow a stem and some leaves and doesn't it all look striking!  In the end we may very well cut the background out of one sheet of glass after we've traced the completed rose onto it.   I think Martha will end up using less glass this way and things will just move a lot quicker.  Sometimes it's hard to know whether or not to use this technique until you actually see the subject matter completely cut out as it is here.

Which brings us to the end of our post where we look at the incredibly complex pattern that Susan D has drawn (on her own) and which she'll begin cutting glass for next week.  Her Summer, Winter and Spring Windows didn't take her long at all but I believe that this window has more in common with her Spring pattern when it comes to complexity.  That said, I have no doubt that Susan will command and conquer this pattern in fairly short amount of time! 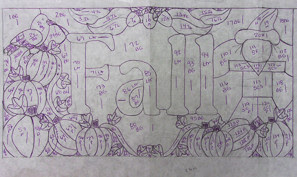 With February behind us this year is passing quickly.  Before you know it it will be next week, Mardi Gras will be over, and we will be looking at even more completed projects.