Why isn't my foil isn't sticking to my glass?  I hear it every week and the answer is always one of the four listed below.

1) The most common problem is that the glass isn't clean.  You may have washed it last week  but every day those pieces sit on your pattern untouched they attract more dust and grime.  You might not see it but it's there.  Glass can create a static charge which helps it attract dust.  If your foil isn't sticking, first try re-washing your pieces using just plain water.  Soaps and other cleaners may leave a film on the glass that can prevent your foil from adhering.

2) The glass isn't completely dry.  If you've just washed a piece and immediately try foiling it you'll find that the foil won't stick.    If you look at the freshly ground edge of your  glass you can actually watch water slowly evaporate off of it even after you've towel dried it.  It can take  30 seconds or longer for your glass to completely dry off even after you've used a towel to remove the water.  As a rule of thumb I wait one minute after I've dried a piece before I apply any foil.

3) If you see a white powder (usually, but not always, on inside curves of your pieces) then they weren't thoroughly washed when they came off the grinder.  This is a common occurance and bevels are often shipped with white power on them which must be washed clean before you begin foiling.

4) The foil is no longer sticky.   Age and temperature affects foil so if you have an older roll that doesn't stick it may very well be past its 'expiration date'.  Store your foil in a zip lock bag to keep it sticky longer.  Most foil will be fine even 6 months after opening it but specialty foils are used far less frequently and need some added protection from the air.  Also, never leave your foil in extreme cold or heat.  In other words, don't leave your foil in the car for extended periods of time.

Lastly silver backed foil, for whatever reason, is always problematic when it comes to sticking.  It usually takes some finessing to get it to adhere to the glass.

So first up this week we have Ann's Lady Of Guadalupe window which is absolutely stunning.  This is a fairly large window (almost 3 feet tall) which explains how all of that detail fits into this piece.  I think that the most impressive thing about this window is something that you can't actually see-- it's how quickly Ann was able to bring it all together.  Ann began cutting glass for this on the second of February and completed it on  March 17th. Also, all of the work she accomplished in that short time was top tier! 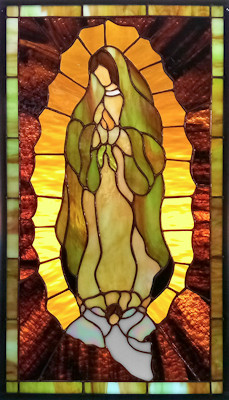 Barbara's Louisiana Iris got its border attached and then she was able to solder it to its completion before calling it a day.   She used baroque glass for the background and cut it out contiguously which explains why the lines match perfectly throughout the background pieces.  We will turn this technique into a tip of the week soon enough. 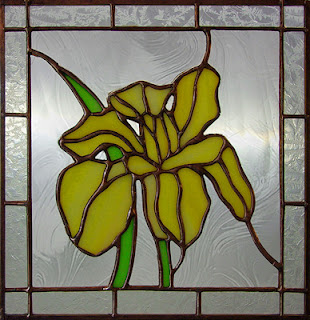 Kerry's Alien is taking a break before he gets back into his UFO and sails off to parts unknown.  I have to admit that this is one sweet oversized suncacther.  As for the hanging UFO, well that's the icing on the cake. 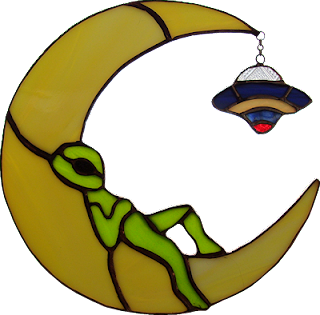 Susan R has the first pair of her Easter Egg Yard Ornaments completed with four more to follow in the weeks to come. With everything cut and ground I have no doubt that these will be finished in time for Easter. 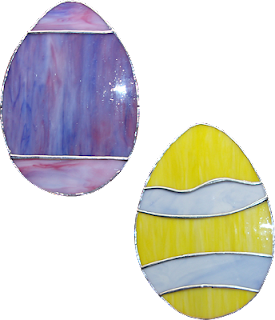 Our last completed project for the week are two more HLB Windows that Linda F wrapped up work on.   That means that she'll be starting something new when she returns and I know she's happy to be finished making these because making more than two of anything is a chore. But don't they look great? 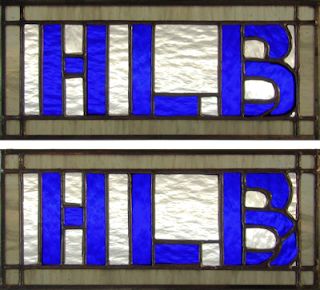 Cheryl has begun working on a birdhouse.  Not a birdhouse window-- a real 3D Birdhouse!  Below you can see that she's cut and begun grinding one of the four side panels.  She'll need two of this particular pattern and two of another for the other two panels.  Since this is a 3D project she needs to assemble these panels in a jig which we constructed out of wooden yard sticks.  This ensures that everything lines up and allows the first piece to but up against the 4th piece without any angle errors.   If we were off just an eighth of an inch on these the end difference would result in a half inch gap. 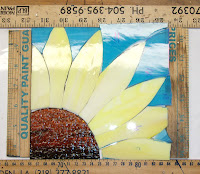 With all of her green glass ground into place Jan then wrapped and tacked the newly cut glass that sits behind the green 'needles'.   Once that was done she wrapped everything, tacked it all together and even got her border cut and ground as well.   The end is very near. 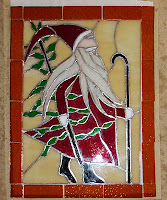 Judy finished wrapping her Angel and then began the soldering process that will lead to the end of this project.  With the front side all tacked together it's safe to say that she'll be starting her new variation of this design after we take this Angels final completed picture. 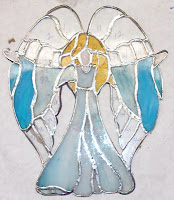 Shawn got an ebony arm and the daisy that the ebony hand is holding all cut out before calling it a night.  That leaves only two arms left to go.  The background itself will come together easily but we still need to come up with a flower for the upper right corner.  I guess I'd best see what can be done because it certainly looks like Shawn will be needing it sooner rather than later!

Sheri began cutting her classic Stained Glass Cross and got all of her glass cut out before calling it a day.   Something that many people don't realize is that the straight pieces that surround the cross are actually a border.  That means we won't cut it from pattern pieces and we won't attach it until the rest of this has been ground and tacked together.

Look at this Heron!  I always say that you get out of a window what you put into it and this just proves my point.  Melissa's got so much wonderful detail in this that the heron almost becomes secondary to all of those beautiful flowers.  But only almost.

June decided to make this large, colorful Rooster Suncatcher.  It may look simple enough but it's going to take quite a few tricky inset grinds to get this to match the pattern.  In fact, now that I'm looking at this I may redraw it to see if June might want to smooth out those deep sections to help make this a little easier to make.

With the coffee grinder section (the right side) of her Address Transom Window all cut, ground, wrapped and tacked together Cindy will next join the two completed sections (right and left) by filling in the center pieces.  She'll begin that when she returns next week.  Once that's done she'll only need to add two borders and this window will be ready for some soldering action!

Robert has a Transom Window of his own in the works and although we didn't know it when he walked out the door, this window already has all of its glass cut and tacked together.  We were planning to add a thin glass border which a small channel would attach to but at the very last moment we discovered that we could skip the thin border by replacing it with some 1/2 zinc channel.  All of the zinc will be hidden behind the wood moulding that will secure the window into place and the size remains perfect.  How serendipitous!

Now this is progress.   Here we see two of Linda L's three Beach Scene Windows and one of them (the top one) is going to be tacked together before the sky is cut so the grain in the sky will flow continuously across the window.  Perhaps we'll see that sky attached when Linda returns unless she decides to keep working on the second window to get it just as far along as her first one.

With her roses all wrapped an tacked together Annette will now be able to fill in the six missing petals that broke when she initially cut them.   That will only take 15 minutes or so which means that the M and the center circle will be the next section that she begins working on. 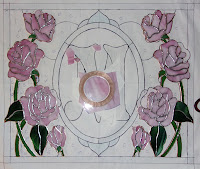 Martha got the background glass for her Yellow Rose Window cut and ground in the first half hour of class.  How did she do that so quickly?  She simply cut one piece of glass that fit inside her bevels, laid the flower on top of it, traced around everything, and then cut each piece free being careful to follow the lines precisely.   Grinding was then very simple-- just skim off any line that you see on the glass.   She ground each piece never checking to see if anything would fit until all of the pieces were ground and then placed back into the beveled border.  Then came the moment of truth as she dropped the flower into place.  Normally there are a few sections that need a bit more skimming but in this particular instance the flower fell into place perfectly!  By the end of the night Martha had everything wrapped and tacked and even had her final border cut and ground.

Susan D already has the majority of her Fall Window ground which means that she can begin wrapping this if she wants.  If anything grows while she's foiling we can simply adjust the background pieces to make a perfect fit.   That's the best way, but not the only way, to deal with windows made up of a lot of tiny pieces.

Number 11 is all wrapped and tacked together.   MiMi will solder this upon her return and I have no doubt that this will be finished that same very night.   I'm already calling it:  Only three more to go!

Let's Daisy Panel is ready for solder as she got her background wrapped and tacked together followed by the first white border and then the final border which matches her background glass.   She'll add some channel and then she'll finish this up upon her return. 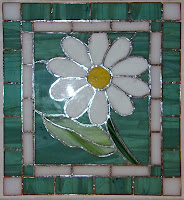 Lastly we take a look at Mary Grace's first Peacock which only remains to be soldered.  Although she wanted a curved top, the sheer weight of a piece this size would make it impossible to hang with a curved top.  Installing it into a wooden frame would be the only way to be sure that this wouldn't come crashing down.  So what difference does squaring off the top make?  It allows you to run a heavy channel along the entire perimeter of the window which gives the same added support that a frame would.  A curved top prevents you from adding channel to the top of the window and therefore prevent you from hanging it securely.