After having 2 weeks with no completed windows I'm pleased to tell you that this week we have not one but TWO spectacular windows to show you.

Grace has completed her Fleur De Lis Geometrical window. I knew it was looking good but even I was surprised at how great it looked when it was lit up. She had watched me attached the zinc channel and then I told her to just leave it so I could wash it for her outside with the hose in the daylight. Plus, it meant I'd get a good picture in natural light when it was finished. When she left it looked like this: 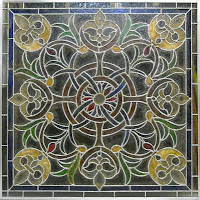 After it got a bath and some sunlight behind it we can really see it for what it is. An incredible piece of work that Grace should be very proud of. I love the deep blue border and you'll see that it's kind of a theme this week. 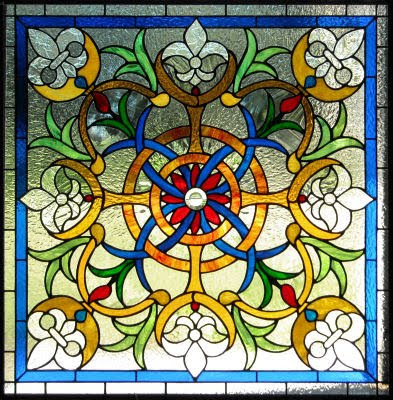 Next up we have a look at Julie's first window. She moved along pretty quickly on this project and as I said last week her soldering was very impressive considering she's never done it before. Again, I love the deep blue border. I also think that adding the amber diamonds in each of the joints made this window look much nicer than the original design that Julie brought to my attention. I think this is a very traditional looking window and Julie couldn't have done anything better of she'd tried. 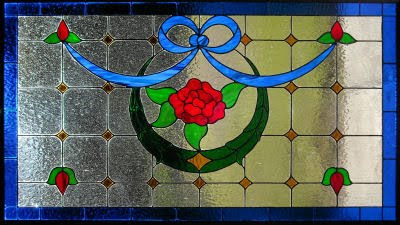 Janice cut the bottom red sections of her window and now that they're cut the rest of this should be simple. All that's left are a few background pieces and then a triple border which will be easy to cut. Look for a better view of this window in our next post.

Patty came in and spent the night working at a grinder. I hate to sound like a broken record but Patty also did amazingly well considering this is the first time she's had to grind anything so exactly. She took her ground pieces home with her to wrap and next week she'll begin cutting the background of her window.

Cheryl tacked both the tiger eyes and the LSU portion of her window together and when that was all said and done she began soldering a little of the front side. By the time the night was over she'd managed to get the borders all cut and took the whole thing home with her to wrap and possibly solder. One more week should bring this window to a close. Look for another completed project next week. :-) 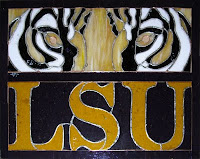 And Grace began working on her next project-- a deer window. She got the pattern traced out and then cut it all up so that she can begin cutting glass next week.

It was great to see some finished windows this week I've been doing a lot of small work lately and now that I'm seeing some large windows completed I'm getting an itch to work on something large again. But I have a few orders that I need to get finished before I can start making what I want to. I'm leaning towards a fancy Carousel Horse but who knows what will happen ny the time I get to making something for the shop.