We're on a roll now, 2 posts in 2 days and I have the pictures edited for another post and ready for uploading. Soon enough we'll be all caught up again!

Roxie completed her 2 LSU windows. When she first saw the pattern she thought it would be extremely easy but upon its execution she's decided that making all those straight lines line up is a b_tch! But as you can see she not only did it but she did it with precision and everything lines up beautifully. 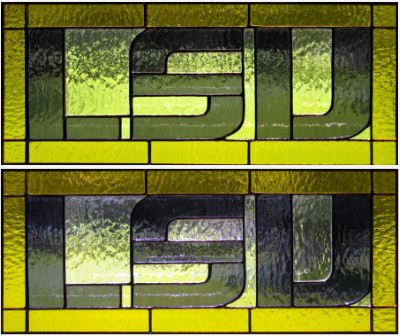 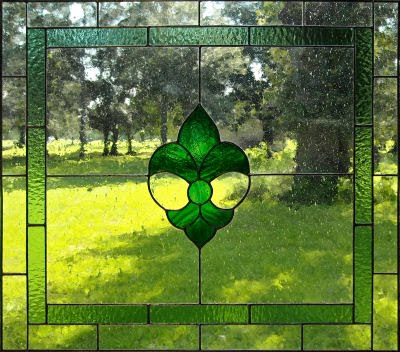 Lisa finished soldering her windows and got as far as coloring one of them before she called it a night. Since it was dark out I took this first picture in the shop with a white backdrop. I told her That I'd color the last window for her during the week. All the real work was already done by Lisa-- all that was left was the cleanup. Here is her first window: 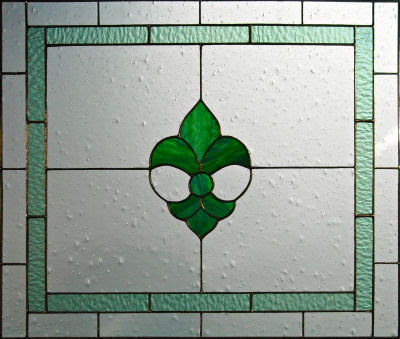 And I must confess that by washing and coloring Lisa's window the next day I had the privilege of taking a picture of it hanging in the window in the daylight. Now you can really get a good look at Lisa's window.

Suzie cut the scepter portion of her window and then spent time on the grinder making sure everything fit together. When that was over with she started wrapping her glass and even got the wings tacked together. 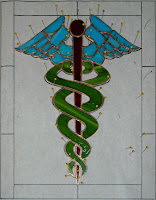 This is Patty's SDL window. Now that it has its background cut out I can easily tell the differenc between Patty's window and Graces. 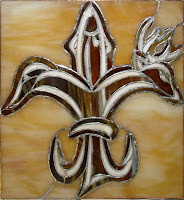 And here we see Grace's Sports De lis window is all ground and mostly wrapped.About the only thing left for her to do are the antlers before we can cut out the background glass. 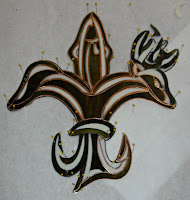 Jane has made MAJOR progress on her lamp today-- we got all the sections put together and then tacked on the cap so she can solder this one at home. 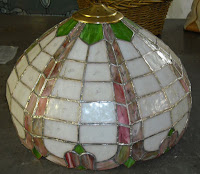 Janice is ready to attach her border. She got it all cut before the class ended so this means that she's officially cut the last piece of glass for this series of windows that she's making. It's been a long time but she's just about through with it now. 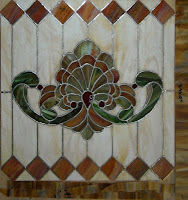 The front side of Michele's window is completed save for 3 small pieces of accent glass that she needs to place in the center stems. Once that's done and the zinc channel is added she'll be able to flip this over and finish it!

It comes to my attention that I may be missing a picture here or there during the ext few posts. Rest assured that no project will be completely forgotten but my mind is a bit of a blank while going through the weekly folders of pictures. And that explains the lack of detail in these posts. I just can't remember what happened!