Well, we've reached the day that Janice might at one time have thought would never come. She's completed all of her 14 windows and has walked out the door with the last one. We've already heard reports of people knowing where she lives because they've seen her windows on the 2nd floor of her house. It's kinda hard to pass without noticing --especially when it's dark outside and the lights are on in the house. I'm proud to say that Janice stuck it out and finished these because a lot of people would have stopped halfway through the project and said that only the front windows needed stained glass. Janice did them all and the results will now last her a lifetime. 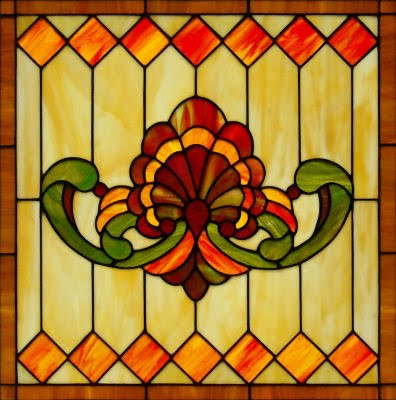 Roxie came in on Thursday night and finished her Oil Kaleidoscope. I may be mistaken but I think this is the first time one of these have been made in class. All I know is that it's a big hit with the students as we'll be seeing many more of these in the weeks to come. Sadly, it doesn't look like much just sitting there on its stand but when you hold it up to the light and see it in action your eyeballs just about pop out of your head. 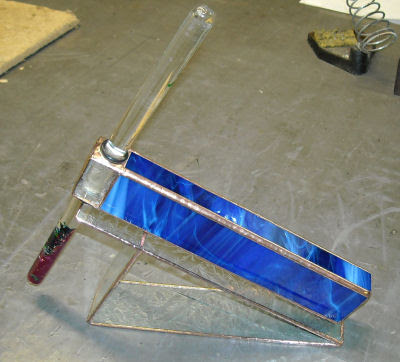 Here are 2 views of a look inside the scope. Imagine images like these continuously twisting and morphing into and out of each another like mini explosions of color-- That's what the Oil Scope is all about. And it's never the same view twice. 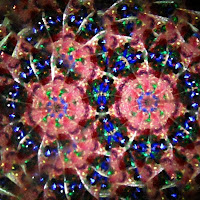 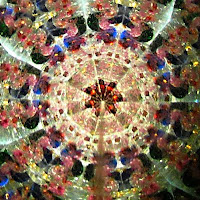 Terry came in to her second class with a pattern of her own design. This is going to fit directly into a window rather than be hung in front of it so the overall appearance is that of a built in look. This is Terry's first project and therefore it's her first time really doing this own her own and just look how far she's come in just three hours of class time! Impressive.

And Myrt isn't sitting around twiddling her thumbs either. She came in, explained what she wanted to do, and provided a drawing of what she had hoped to make. A few minutes later we had this drawing of a coffee pot for one of her two cabinet windows. The other window will feature a steaming cup of coffee. But that one is for next week. Also, we'll see a common thread in these windows to subtly link them together. 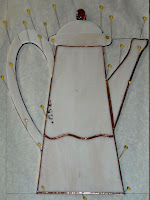 Bonnie has been cutting and cutting away but this week she spent a lot of time at the grinder fine tuning all of those pieces so that things fit together perfectly. She's taken all the glass that she ground home with her to wrap so that when she returns next week she'll be tacking them together and then cutting the background glass. She's not moving slowly at all- she's just making so many of these that I've honestly lost count of them all! 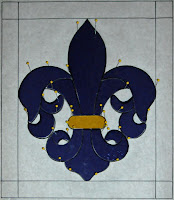 With her clear background cut and her border now firmly attached to her Sports De Lis Window Grace needs to just add a brass channel edge and then solder this window to finish it up. Soldering doesn't scare Grace (of course neither does any other part of making a window) so this will be out the door shortly. 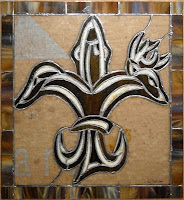 It seems like I've been doing nothing but working on Blogs but I still have a way to go before we catch up. Almost all of the pictures have been sorted, adjusted, cropped and resized so hopefully I'll be up to 1 post a day soon.