Roxie was feeling a little bit depressed because she read the Blog last week and said that she kept reading about how other students cut, grind, foil and tack things together all in one night. But Roxie got all of the Letters for her Camp Maypop window traced out on her yellow glass, and then cut and ground them. Now that's not a bad nights work at all. Plus, she went into the house and came back a little later with a dip for the Tortilla chips she brought with her that was SOOOOO good....

Well, it was so kickin' it made the Pope knock out a stained glass window when he tried it! So all in all it was a very good night for Roxie. Here's a look at her letters thus far. It won't be long too before we read about how she has cut, ground, foiled and tacked her border all together (in one night!)

Susan cut, ground foiled and tacked her background pieces this week (sorry abut that Roxie!) Susan, like everyone else just starting a stained glass class, is concerned about all the little things she sees 'wrong' in her window, but she has nothing at all to worry about as it's fitting together perfectly. Before class was finished she also got her inner border cut and skimmed. She's taken it home with her to wrap so that next week we can just tack it on and move on along with the final border. You can see the first piece of her inner border in the picture below.

Dianne is really moving quickly with her Rooster window. There are a lot of pieces in this and she's got them all cut out and has begun grinding them already. Everything to the left of the rooster is ready to be foiled so there are only a few large pieces left to go before she gets into the wrapping process. What a nice and colorful window this is shaping up to be.

Meanwhile, Dianne's husband, Peewee, got almost all of his background cut, ground and foiled. I say almost because we had a slight incident where we broke a piece while cutting. As always, it was at the very end when the difficult cuts where already done. Since this was cut all from 1 piece of glass without a pattern we're just going to tack it together and then trace out the missing piece so it will fit in seamlessly as the original would have. Isn't this an nice design?

Well, Fran certainly came in with her ducks all in a row! Well, maybe a column. :-) When we last saw her she had just a pattern and the sheets of glass she planned to use which she took home with her. This week she comes in and the ducks are all cut and ground. And they look GREAT! What a good job she did on these. Next comes the background. 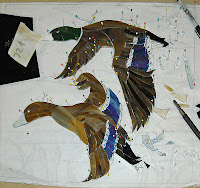 Actually this window was supposed to be posted last week but I forgot to take a picture of it so it never made it into the proper Posting. This is Janice's newest Rose Window. She came in with just the roses tacked together and laid them out somewhat randomly on a pattern paper. We traced around them, cut a few single leaves and traced around them as well. She added some stems and then cut them all out and got them all ground just as class finished. She'll tack these and then add a border. 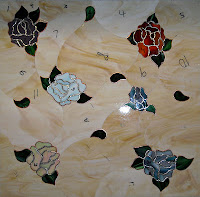 Terry worked on most of this while she was at home and there are a lot of colorful pieces in it. It's the first of 3 windows (she likes making windows in sets of 3) which are all tied together. This is one of the end pieces and she has the design for the center piece completed now. It was kind of a group effort in class to come up with a design for the center and I think we did well. You'll see how that window is shaping up in our next post... 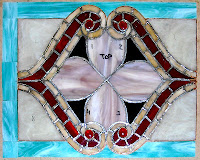 Patty is moving along with her seafood window but I'm worried it's going to leave a bad taste in her mouth! Honestly, it's coming together nicely and now that we've decided to work on all these pieces with a break here and there for other projects I think she'll have a much easier time with this. Like I said though, it's really shaping up nicely! I get hungry just looking at it.

Cindy is also moving right along on her front door window. She's started the center panel and has a lot cut already. Her smaller end panels are complete and ready for solder. Since this window is so large she can't easily transport it back and forth so it's a project that she's working on solely in the shop otherwise I think she's have this all assembled already! The window is a bit too long for me to fit in the camera-- the ceiling is in the way so I can't fit the entire pattern into the picture. You'll see it when I can set it on the floor though. For now, here's the middle 3/4's of her window.

Ahh, how relaxing. Cheese, Grapes and Wine! Myrt has her voice back this week and has brough a touch of class into the class on Tuesday night with her window. It's tacked together but the 4 darker corner pieces are just cut and haven't been ground to fit yet (you can see a section that needs to be ground out under the right-most wine glass). Once they're ground and tacked into place there will just be a border left to cut and then we can share the wine!

This week was a bit odd because for the first time in months we have no completed projects to show this week. You would think that happens often but it's actually the exception to the rule. Our students can really knock out the windows! Next week I know we'll have something finished to show you but until then, foil all your glass evenly and don't forget to cut off all of your marker lines!