It's a sad day here as we announce the graduation of 3 of our students.  Roxie, Sonia and Patty have each announced that due to schedules, moves, and grandchildren they will be leaving us. It's been a wild three years with them and they will be sorely missed.

And with that sad piece of news out of the way we'll look at the project that Sonia took home with her on her last night of class.  As a Charlie Brown fan Sonia always knew that she'd eventually make a window to show her love for Charles Schultz' creation.  Now that this project is all cleaned up you can see how bright and cheerful her window is going to be making her new house.  However, she'll be leaving a hole in my heart.  :-( 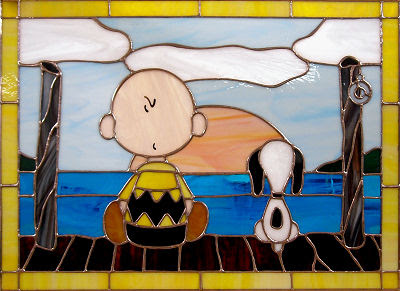 Shelley has completed her Bird and Flower Window and its simplicity gives it a huge amount of charm.  She used nice vibrant colors set into a crisp, clear textured background glass that really makes the bird, flowers, and leaves in this window stand out.  Great job, Shelley! 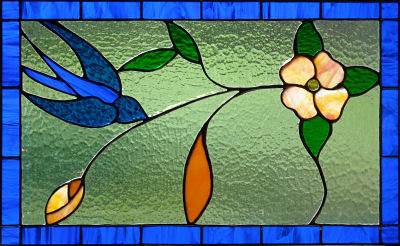 Roxie decided to make a cross during her last class with us.  It's pure white with a sharp and elegant bevel cut into the center.  She's made these a thousand times before so she's quite adept at putting these together quickly.  I also think that she gives them all away as gifts so she'll probably need to come back and make a few more to have on hand if she needs a gift or two down the line.  :-)  I'd make a joke about Roxie having no class once she leaves us but that's far from the case-- she's one classy lady! 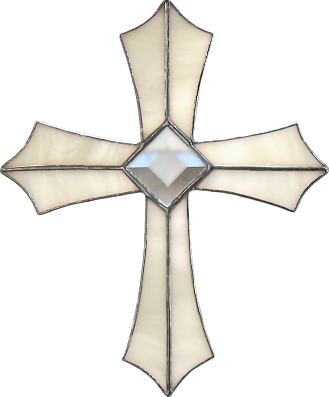 Wow, Lynn's cabinet door inserts looked nice but once you see them set in their wooden frames they really light up.  Lynn has accomplished a lot since she started last summer.  I've seen what her newest project is going to be and all I can say is wait until you see it.  Not that it will make these inserts look bad-- nothing can do that. 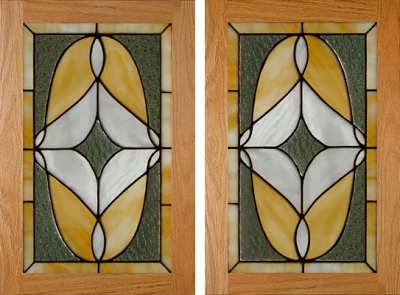 But before Lynn starts on her next window she decided to knock out some quick glass panes for a lamp that she has.  She's making five yellow ovals each set into a clear, textured glass rectangle.  Once we drew up the oval Lynn got right to work and got a good 80% of this project finished in just one class. 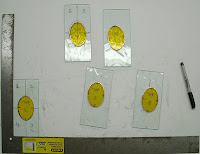 Brenda has her Number Nine Emblem Window all ground and ready for wrapping.  She picked out a nice red border and you can see one of the 4 strips along the top of her window.  When she finishes this it will have red surrounding the entire window.  The contrast of colors in this window is perfect. 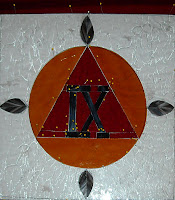 Myrt has just a few pieces left to grind on her Red, White and Blue Balloon and then she'll grind her Fleur De Lis balloon in the center.  Once the balloons are completed and tacked together the background sky and land will be a breeze and most likely cut out in just one night.  We're so glad that Myrt was in because we hated eating the gravel that was supplied to us during the week she didn't show up... 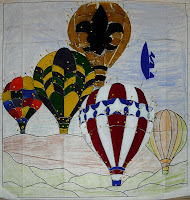 Cindy is moving right along on her Tribute window-- all she needs to do now is grind the name 'Rye' and the 7 pieces that form its background.  Since the window isn't really that large she's decided to finish it off with not one but two borders.  On a window like this I think it's going to look best with 2 borders anyway so 'Good Call, Cindy!'

Donna got all of her Bird cut out and ground before she took her project home to wrap.  This is going to be set into a clear textured rectangle and then finished with a single border.  It already looks great so just imagine what it's going to look like completed with light behind it.

Now I haven't seen this pattern done in a long time but now that it's all cut save for the background I can honestly say that it looks even better than I remember it looking.  The black and white pattern didn't have near as much personality as the colorful glass version does and I must say that Martha has really hit her stride on this window.  She's been moving along quickly yet precisely and her choice to use glass globs for the eyes was genius!   And that's the way (uh huh, uh huh) I like it (uh huh, uh huh). 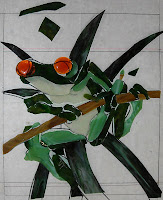 Patty still has a few weeks with us because she's not leaving until she completes her Magnolia lamp.  These lamps are actually very easy to make (which is why I insist that first time lamp makers do this as their first lamp) and Patty is moving at a very good speed.  You can see two of her three sections tacked together on the bottom of the picture.  What you see above the finished sections is the mold that the lamp is made on.  I suspect that Patty will get the 3rd and final section together  when she comes back in and since that won't take a full class she'll surely get the 3 sections put together which will make the lamp complete.  Here's hoping that I can talk her out of leaving us in her remaining classes since she's part of my weekly therapy on Thursday nights! 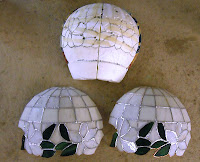 Tim has begun working on his tiger window and it's coming together perfectly.  This is an advanced project for Tim to be working on since he really doesn't have a lot of projects under his belt, but as you can see he's moving along wonderfully.  And the beauty of it is that he's been doing this at home rather than in class!

Wow, Terry's Hibiscus Window is really sharp.  It's not only all cut out but it's ground, wrapped, tacked and the first side is even soldered already.  I just love this design!  And I have to admit that Terry makes this look all too easy.

Okay that about wraps it up.  Here's a final look at 3 of our 4 Thursday Night Ladies.  Patty, Roxie and Sonia are going to be sorely missed but it has been a real pleasure.  We wish them the very best in all that they do. 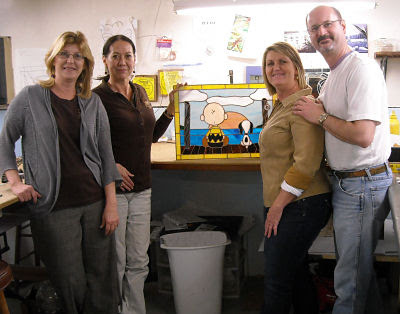