It Was The Week Before Christmas

It's truly been months since we've had an update if you consider that our last post was 2 weeks before Christmas.  After that we had the New Year, personal issues and vacations that made January a VERY spotty month.  In fact, even though it's February we've yet to have a full week of classes, but that looks like it will happen this 2nd week of February.

Before I jump head first into this post I need to say that both Ann and Martha had completed projects that I've omitted from this update.  Why?  Well, this post reviews the classes that occurred up to December 25th.  That was a hectic week because everyone needed projects completed before they left for the year and because of that we have an overflow of completed windows for this post.  Since we have no finished projects for the following week I'm pushing Ann and Martha's windows to the next post (which is already written and ready to be posted) so they won't get lost in this update.  It also allows me to have a picture for our email notification which our long time readers know features pictures of the weeks completed projects.

So let's get started here with a look at Brenda's Football window.  When we last saw it the border on the left wasn't cut out at all.  When she brought it back in this week it was ready to hang in a window.  Brenda does a wonderful job at home is is moving along wonderfully. 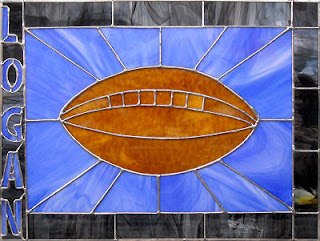 Donna began working on this Card/Pencil holder last week and this week she came in with all eight sections tacked together ready to be assembled.  It's sort of hard to tell what's going on here because the curve on the back panel starts low on the left and runs up higher as it moves to the right.  The middle section curves in the opposite direction making this unsymmetrical but decidedly stunning to look at.  Donna really came up with a winner on this project. 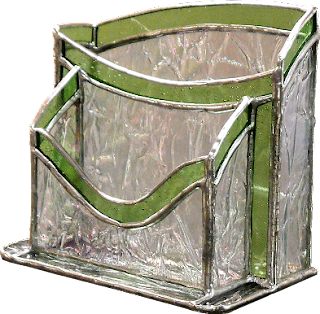 Next we take a look the two 3D projects that Susan completed.  When we last saw these they were barely cut out but due to some serious dedication on Susan's part these were ready to be a gift for Christmas.  When she brought them in they were almost 100% finished, with just a quick retouching on some of the corner soldering due to the fact that these don't solder as easily as a flat window.  But here they are ready to store all the pencils and pens that clutter up your desk! 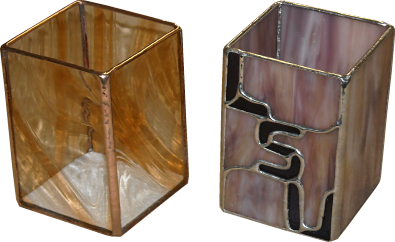 Roxie completed the last three of her humming birds which means that she completed her Christmas shopping on time.  The glass beads for eyes really work much better that the glass head pins that we used to use.  Also, Roxie's work is top notch.  It would be a shame if she stopped doing glasswork since she's doing SO well.  :-) 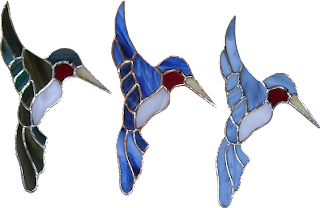 Lynn finished the first of her two cabinet door inserts and the second one is ready to be soldered.  I didn't manage to get a picture of the second one but they're a matching pair so you easily get the idea.  Lynn drew this design herself and made most of it at home save for some quick border cuts and some grinding here and there in the shop.  She also picked some great colors because they're very traditional which fits the design but they're essentially neutral so these windows will go well in any room regardless of the color. 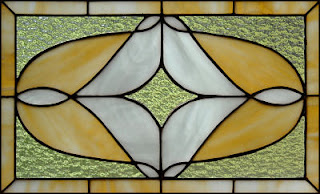 Tim completed this stained glass frame which he made out of the same clear glass that Donna had used for her Card/Pencil Holder.  I've learned never to take a picture of clear objects on the work table that has the grey top because it makes the glass look colored in a very unflattering way.  Trust me when I say that this frame has no color to it  giving it a very classy look.  Tim's thinking about making some Tiger Eye windows for his next project and I know he'll handle it perfectly. 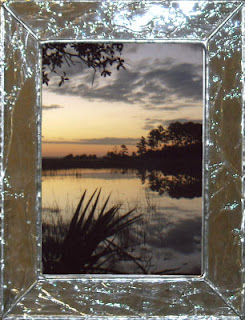 Meanwhile Jane made great strides with her Heron window.  It's all tacked together and she only needs to add her border before she can start putting a finishing solder on this project.  I'd say that inside of 2 weeks this will be a completed!

Cindy's Cat Tray is coming along purr-fectly.  The front is almost finished with only 4 pieces to go before she tacks this together and then solders it.  This project wasn't a Christmas gift and Cindy's been doing double duty at her store while her husband recovers from his knee operation so it's moving slowly (compared to her usual turnaround).    Normally she'd have this completed in no time but she's lost the ability to work at home-- For now, anyway.  :-) 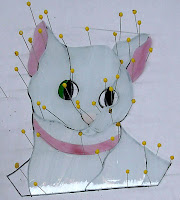 Okay, once Brenda saw the Christmas Lights Ornament that Cindy made last week she knew that she needed to make some for herself.  What you see here is the start of those Christmas Lights.  They have no choice but to come out looking just as good as Cindy's did because, well, just look at the colors that Brenda picked. 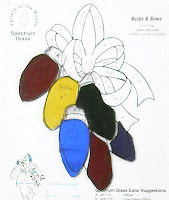 And Myrt is working on her Balloons again!   With two balloons ground and the big red, white and blue one left to go she'll have the toughest parts of this window completed.  The fleur de lis in the largest one will really give this window a Louisiana feel. 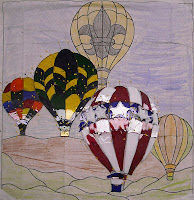 Patty has all of the background glass for her Magnolia Lamp cut and ground.  Here you can see that she's bagged all of her off-white pieces so she can take them home to wrap.  This week we saw Patty cut it all of the leaves.  They still need to be skimmed on the grinder, but that's easy.  Next up, Flower petals!

Shelley has her Bird and Flower window all ground, wrapped, tacked together and  ready for a border.  She had worked on this at home and did really well on her own.  The next time we see this it will have a border and some solder on it!

Meanwhile, Sonia's Charlie Brown window has been borderized!  We tried every color under the sun (that was available to us in glass) and this was by far the best choice.  Sonia had originally picked green but it just made the window dull and lifeless whereas the yellow brightened up everything and gave it a happy feeling.  When we see Sonia again Charlie and Snoopy will be sporting a fresh soldering job.  Yep, this window is almost ready to go home.

Terry has begun work on her Flower window and her colors are spectacular.  There's just a hint of green in the glass that she picked for the flowers and it goes perfectly with the green leaves.   I like how the size of the flowers dominates the window leaving very little background.  This is another one of those windows that I can't wait to see completed.

Ok, we'll have our first official post that covers the start of 2013 in another day or two.  I don't like to flood the Blog with new updates because people will only read the newest post.