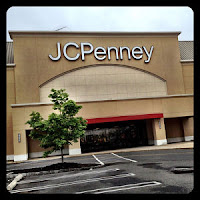 Here's a story about one of our students that absolutely must be repeated here.  It's about Student X's unfortunate trip to JC Penney's with her husband.  He was shopping for some shirts for work and wanted to try them on before purchasing them.  Student X had been feeling rumblings in her stomach for a while  but when he disappeared into the changing room she knew right away that she needed to get home immediately.  She waited a few moments trying to be patient but after 5 minutes she knocked lightly on the changing room door and tried turning the door knob.  When the door opened she slipped inside and closed the door behind her. What she hadn't counted on was that she had been watching the wrong changing room door and had therefore entered the wrong fitting room.  Instead of finding her husband trying on dress shirts she found herself in a small, mirrored room with an EXTREMELY large man wearing nothing but bikini briefs and struggling with a pair of jeans that were down around his ankles!   And since his back was to her she was looking at the moon, so to speak.  Needless to say she got out of there in a hurry and to this day wonders if the man even knew she was in there with him.

Well, at least I changed the names to protect the innocent husband and the decidedly naked man...

Now let's hop into this post by starting with a look at two Cabinet Door Inserts that Ann has made.  You saw one of them a few weeks ago but here's a look at the pair together in their respective wooden frames.  Ann is currently cutting out a larger window that will match these in both color and design.  We'll show you how that's moving along in our next post.

And this is another window that was skipped in our last post so that we could feature it more prominently this time around.  Martha's State Police Window came out looking wonderful and I'm happy to say that the '75th' that was painted onto the round center of the Fleur De Lis is clearly visible when there's light behind it.  While it was sitting on the work table we thought you wouldn't be able to see the number at all.  It's amazing what a little light will do and what Martha can make out of a few sheets of glass.  :-) 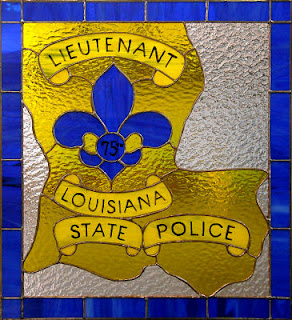 And now that her Police Window is completed Martha has decided to get into a project with a few more pieces.  This Frog window is going to work out perfectly and she even found some rounded globs for the eyes to make it stand out even more.  The face of the frog will be slightly readjusted to make room for the larger eyes but changing that will be easy.  During her first class working on this project she got the pattern traced onto pattern paper and cut out into individual pattern pieces.  She also picked out her colors and got 2 pieces of actual glass cut but next week she'll be doing some real glass cutting. 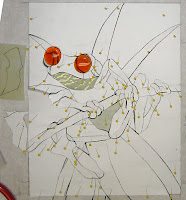 Brenda worked on this Louisiana Fleur De Lis window while at home and it's almost completed already.  But is that any surprise?  You'll see another version of this window a little further down that her sister Terry is working on.  I've got to say that I can see huge strides in Brenda's abilities with each project she completes and this project is very near being finished. 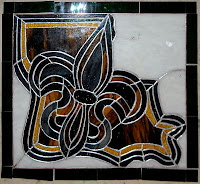 Bonnie has the front of her Humming Bird window completely soldered and it is stunning already.  There's only the back side left to go and I'll bet money that she will have that completed when she comes in for her next class 2 weeks from now.  Wait until you see this window with some light behind it.

Donna has decided to take this pattern and make it match the picture of one of her friend's birds.  She'll be changing the tail feathers and the head as well as putting it into a rectangle and finishing it off with a border.  The colors that she picked out will match the actual bird so this will be another very personalized project.

Sonia has the front of her Charlie Brown and Snoopy Window soldered and that means that this will be completed next week.  Every time I see this project I start singing "Peanuts on the dock of a bay, watching the tide roll away".  It's just a shame that Charlie Brown  is already bald when he's only 9 years old.   Great job Sonia! 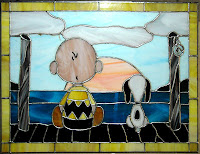 Jane's Heron window is so close to being completed that it isn't even funny.  It's tacked together and she's picked out the glass that she'll be using for the border (you can see it on the left side of the window).  Once the border is on this will be ready for some solder.  The end is near-- Jane can see light at the end of the tunnel!

Cindy came in and worked some more on her Tribute Window.  Little Rye passed away a few weeks ago and Cindy has decided to make this for his parents.  I'm sure this sweet little window will always be appreciated.

Tim is finished with frames and taking on a nice sized project with this LSU Tiger Eye Window.  In fact, he's making 2 of these rather than just one and he's cutting all the glass out in one fell swoop.  He's starting with the top 'Eyes' section and once they are both tacked together he'll work on the easier LSU bottom.  His colors are picked and he's taken his glass home with him to work there so I'm sure we'll see some good progress when he return next week. 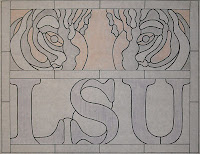 Myrt is so full of hot air-- Or maybe that's her balloons!  With her large Red, White and Blue balloon all ground she'll be moving onto her Fleur De Lis balloon next.  I see a very small problem that is easily fixed that I need to mention here so that Myrt reminds me about it when I see her next week.  It's nothing you can see in the picture below (that's how small it is) but when it's corrected it will make a world of difference in the finished window.  I'll tell you what it is when we see Myrt again... 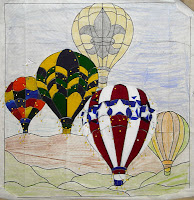 Terry knocked this window out while she was at home and only had to bring it in to get a piece of zinc channel bent to fit around the curve to finish it off.  There's still the second side to solder but after achieving this much in just one week the soldering on the back side will be like child's play to Terry!

And as you know, Terry isn't one to work on just one window at a time so she's also still working on this Flower window for herself.  All the glass is cut so she's on the home stretch with this window.  Her green border works perfectly with this color scheme.

Did I mention that Terry likes to work on multiple projects?  I only ask because this is a look at the THIRD (yes, 3rd!) window that she's been working on this week.  It's almost identical to the window her sister is making but it features a Tiger Eye in the left section of the Fleur De Lis and a pepper in the bottom section. Who knows what Terry will show up with next week. 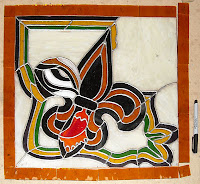 Well it's official.  You've reached the end of this update and there are no other windows by Terry (or anyone else) to surprise you with-- you've seen them all!

Come back soon and check out our next update.

Posted by Bayou Salé GlassWorks at 10:07 AM