Nose To The Grindstone

We're a bit behind here so this post is taking care of the events that happened in classes during the second week of February.  Put on your seat belts because here we go.

Bonnie's Hibiscus and Humming Bird Window is officially completed.  And it is one elegant looking window, don't you agree?  Her cutting and grinding were precise which make the lead lines between the flowers and leave look delicate and graceful which pretty much describes this entire window.  The leaves cutting into the thin, blue inner border really help make the window special.  And the final clear border that matches the background just completes this project perfectly. 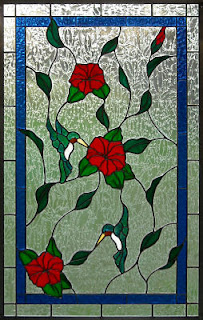 And here is Brenda's latest window-- A Louisiana Fleur De Lis.  She decided to use glass that was transparent for the most part, but dense enough to not allow anyone to see right through it.  The background, however, is solid which lends the State emblem more focus due to the contrast between the different glasses.  All in all, another project well made by Brenda. 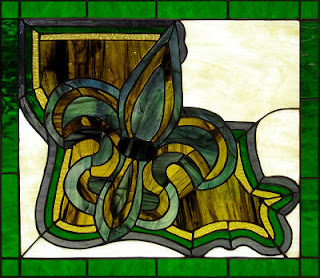 Next we look at the same basic pattern made by Brenda's sister, Terry.  She's altered it somewhat by adding a Tiger Eye in the left section of the FDL and also by adding a pepper in its lower section.  Talk about making this project her own!  But then again, Terry always does that. 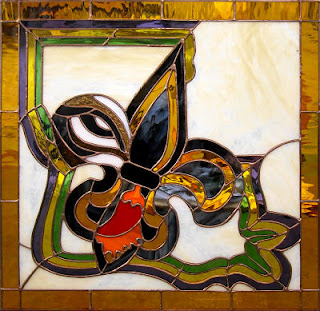 Is that a butterfly?  Well, that can only mean one thing-- a new student!  Yes, we have welcomed Betty into our classes this week and she made this butterfly without even breaking a sweat.  Starting with her tracing and ending with her soldering, Betty made making this sun catcher look easy.  Next up for Betty will be an Angel Window that will look familiar to those of you who read this Blog on a regular basis. 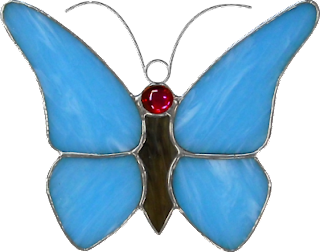 After completing her Hibiscus and Humming Bird Window Bonnie's decided that a Vigil Candle Holder would be her new project.  She'll be making this out of a deep blue glass with a 'P' cut into a textured glass oval which will be in the center of one of the four sides.  She'll also be making a cap for it as well and wait until you see the rich, contrasting colors that she's got picked out for this piece .

Next we have the center piece to Ann's newest project which is a matching window to the two Cabinet Inserts that she finished before Christmas.  It's the same design cut in half, but cut out larger.  I've cropped out the end pieces so that you can be surprised at how nice the overall effect will be when you see the glass she cuts next week get placed on the pattern.  Let's just say that making this center section bigger isn't making things any easier for Ann.  The left and right sections will be just as small as her last set of windows. 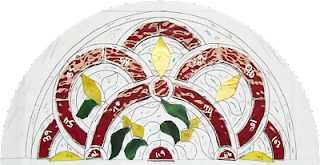 Cindy's Tribute Window is now ready for some solder.  She got it all wrapped this week and will be tacking it together and adding her double borders when she comes back in.  Next up for Cindy will be a large mirror for her bathroom.  Just wait until you see that one. 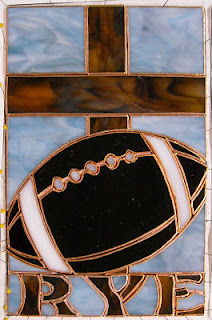 Martha has begun grinding her Frog Window and she's moving along nicely with it.  This is truly her defining project because this is the one where I'm seeing so much growth in her ability to do glass work.  Her cutting and her grinding have gone so smoothly and quickly that I can tell something has really clicked with her.  I remember the window I was working on when I suddenly 'got it'.  This is certainly Martha's.  Look out now because the girl's on a roll! 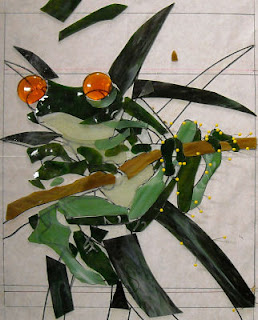 Donna came in knowing that she needed this window ready for solder before she left class on Wednesday night so she put her nose to the grindstone and walked out the door with her window  needing only to be soldered.  When she came in she already had the bird tacked together so the first thing she did was cut out the background and then tack that to the bird.  Then after trying just about every color glass we had, she decided on the only obvious color that worked for a border which turned out to be this beautiful Blue/Green.  Trust me when I say that no other color set this window off the way this glass did.  It's a stunning window that Donna put together like an expert. 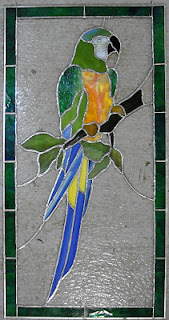 And Terry, not being content to simply finish a project,  continued working on her Two Birds Window and the slightly angled, light amber background really gives this a classic stained glass feel.  This window is all about soft colors and Terry's eye has found the perfect combination for this project. 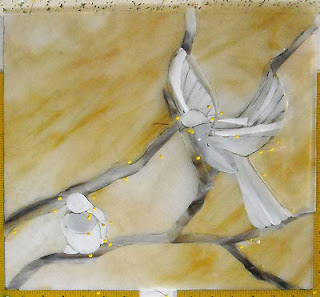 Subtle.  That's the word that describes Patty's lamp best and it's something I strive for in my work.  Yes, stained glass can be about contrasting, vivid, rich and intense color choices but there are times when a softer, warm hue can make a project say more and this Magnolia Lamp that Patty is making is a perfect example.  The flower petals are noticeable but they don't cloud your perception of what this lamp is about when you look at it.  Patty has all three sections tacked together and has attached the cap.  Next she'll begin soldering it and just wait until you see this cleaned up.  Mark my words, it's going to be beautiful. 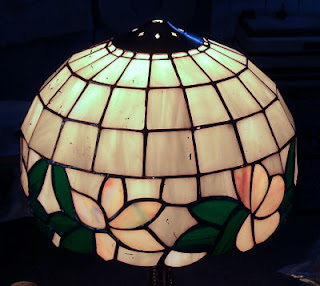 Lastly, after Brenda finished her Louisiana Fleur De Lis she wasn't entirely sure what she would make next.  She knew she wanted a duck or a mallard for her husband and after going through some of our existing patterns she found this.  So she traced it out, took it home and we'll see what she comes in with when she returns next week. 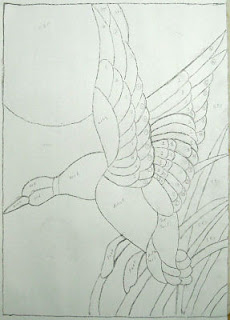 Here comes a spoiler:  In our next post you'll see MAJOR progress on Brenda's Mallard Window (I know because I've seen it already) and it's turning out to be a beauty!  And as always, there's plenty more to see as well.  We have new students as well so they'll be another round of butterflies as well.  Have a great week!