All Alone With Someone

We ended up having smaller set of classes for this post due to a power outage that ended up canceling our Wednesday Morning classes.  Susan and Shelley stuck around for a bit hoping that the power would come back on but that didn't happen until 12:30.  Long before that the two of them ended up taking glass home so they could work on their projects during the week.  Sadly, we missed out on all the laughs that we normally have during of our class time together.  Well, there's always next week.


So we'll start off by saying that Martha has officially wrapped up all the projects that she's been working on.  That means the last one, her Angel, is officially completed.  The soft colors she picked make the iridescent wings stand out more than they usually do when they're offset with heavier colors.   I have no clue what's up next for Martha but you can bet it will be spectacular at the very least. 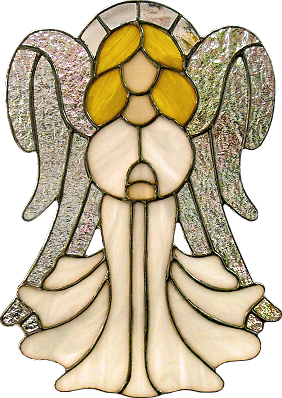 Terry made this quick and simple (but very attractive) framed frame which makes this the second one she's done in as many weeks.  She'll be the first to tell you that these are quick to construct and a great way to use up small scraps of glass.  And they make a great gift! 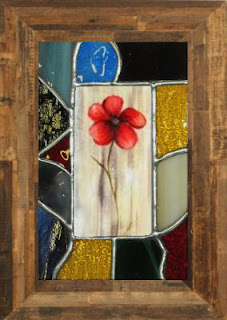 Terry also worked on her newest window which is a Vase of Flowers.  Her inspiration came from  a coffee cup of all things.  Obviously she began cutting this at home but she accomplished a lot in class as well.  She also has 2 more HLSU Windows in the work that will probably be completed when she comes back in.  Me, I can't wait to see this finished because it's already looking like it will be another standout piece in Terry's portfolio of glass. 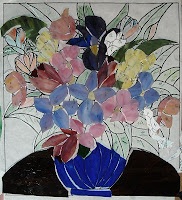 Brenda kept on plugging away at the grinder this week making her Fish Window fit together.  I know she was having a bit of a time with it fitting but by the time she left things were under control.  I've found that when you're grinding a window things go much better of you look at the pieces individually rather than looking at the big picture.  It's too easy to get overwhelmed if you're focusing on all of the pieces you still have in front of you.  Even though Brenda has this coming together now I know that she'll be happy when it's ready for some foil and solder and she can walk away from the grinder.

Myrt has made short work of this window, hasn't she?  It's all tacked together and the front of it is  already completely soldered.  She's taken it home with her so that means that when it returns we'll just add two hooks to hang it by and then take it's last picture before it finds a spot in a window.   Myrt did a great job on this project and really wants to get back to her balloons!  Still, I can't wait to hold this up in the light next week to get a good look at it. 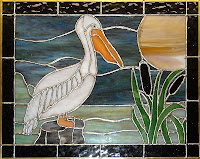 Cindy wanted to do another Fleur De Lis window but she wanted it to have a little more complexity than most of the other FDL windows we see done here in class.  She found this pattern buried in one of the pattern drawers and decided instantly that this was going to fit the bill.   She traced it out, cut out the paper pattern and even got the FDL section cut and ground in glass before she headed home with the glass she was going to use for the background.  This has turned out beautifully the first 2 times it was done and I have no doubt that Cindy will will make sure that the third iteration of this window will match the first two versions as well.. 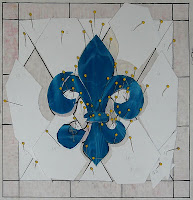 Linda has all but the border of her Traditional Style Window cut and ground.   I'm even fairly sure that she'll even have it wrapped when she comes in with it during her next class. Wiggle room is what Linda is working on most with us. We never want our finished pieces of glass to fit too snugly because she still needs to get 22 pieces of foil (in this example) along the top and bottom portions of her background.  Foil may be thin but 22 pieces of it will cause everything to shift out of shape if you don't leave room for all it when grinding.  With only borders really left to cut I'm sure Linda will be soldering soon.

Mary has made great strides with her Iris Window this week.  She thought she had a disaster on her hands when she came it (her green glass fell and broke into many pieces before she managed to cut out any of her leaves) but with some rearranging we were able to get her pattern pieces to fit onto what was left of the glass and now she's back on track again.  She's going to skip the cutting of the sky because the glass she's picked has a pronounced grain running through it that we want to preserve.  That means that Mary will grind and tack what you see here together first and then cut the sky out of one piece of glass after placing it under this completed section.  Doing that will ensure that the flow of the sky will be retained and look natural.  This will be VERY apparent when the window is hanging. 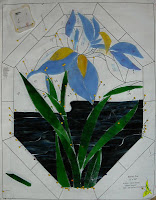 Tim has his first Beveled Fleur De Lis window (on the right) all tacked and ready to be soldered which he plans on doing at home.   So while he was in class he decided to start a second FDL window using a different bevel.  Tim picked this amber/yellow glass and managed to get all of his background cut and ground before he took this one home as well with only the borders needing to be sized and attached. 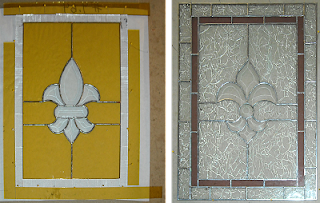 We're happy to announce that Donna has started a new job but because of her new hectic week she wasn't able to work on her window while she was at home.  But that doesn't mean that she's been slouching at all because Donna get's a lot done in the class time that we spend with each other.  By the time she left this week she had her borders attached as well as the brass channel the finishes off most of our windows, and the hooks to hang this by!  And if that weren't enough she also managed to get the front side completely soldered so we'll certainly see this completed when she comes back in whether she gets to work on it at home or not!

Ann's window is now completely ground and she's made an incredible amount of progress in wrapping her pieces this week.  To be honest I have to admit that I had no clue at just how quick Ann is at wrapping until tonight.  I'm sure this will be tacked together when she comes back in although that might not be next week since school is ending and Ann will be swamped with 'end of the year' work.  Nonetheless, this project is completely under her thumb now!

And that brings us to our last work in progress.  Bonnie's begun the serious part of working on her lamp and in this class she's managed to cut out almost all of her background glass.  This lamp isn't dominated by gridwork so there's still a lot to go but I'd say that the background makes up close to a third of the pieces so this is a great chunk of cutting out of the way.  These are only some of the pieces that she finished because she did grind a lot of it as well and took that home with her so she could begin wrapping.  Mark my words when I say that this is going to be a show stopper. 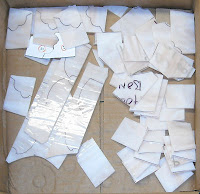 And that about does it this time around.  Hopefully we'll see Jane again soon-- She's had her hand operated on which certainly put a damper on her ability to use a glass cutter.  Here's hoping to a speedy recovery!