Wow, after sorting through my pictures I can't believe how much I have to post this week so I'd best get right down to business here.
Cindy's Mirror is officially completed and something that I've learned is that I need to come up with a better way to photograph mirrors.  Please excuse this photo because when seen 'in real life' the entire class was ohh'ing and awe'ing.  To block out the awful looking walls and ceiling in the shop I photographed the mirror in front of a flowered (and slightly wrinkled) showed curtain.  This explains the small flowers-- they are reflected in some of the mirrored sections.  The next time someone does a large mirror I think I'll just have all our students gather around for a group photo in the reflection. 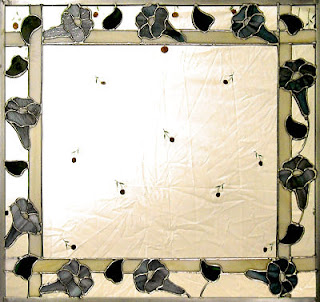 Martha went ahead and put the finishing touches on her Dragonfly Window and much like her Frog Window this project turned out to be bright, bold, and beautiful.  Next up you can expect to see Martha's Angel get a good soldering and then fly out of the door. 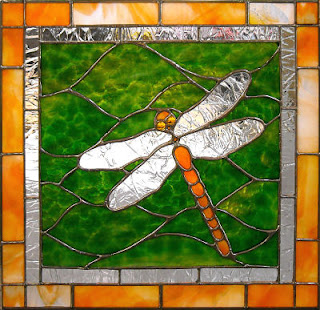 Brenda came in with this Cross window almost completely finished and by the time the class was over it was 100% completed.  It's Brenda's own design and she likes it so much she has another one almost completed (although it's been made in different colors as you will see later on in this post). 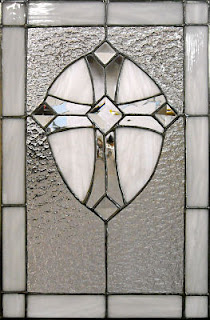 Linda's first window with us, her Victorian/Geometric Window, is now a completed project as well.  The biggest tip Linda has learned is to not fit her pieces so tightly together. We always want some wiggle room to allow for the foil to fit in between our pieces.  Look at this picture and tell me that you can see where there are any gaps.  There aren't any because everything was consistent and even.  I think Linda's going to do absolutely fine on the rest of her projects with us. 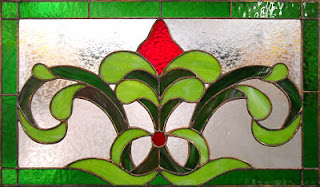 Terry assembled this quick little framed Picture Frame very quickly and it was finished by the end of class.  I've taken the liberty of adding a picture of a flower in it to give you the definitive view of this cute little project that Terry essentially made with scraps. 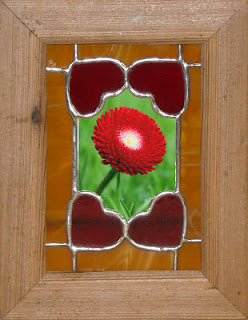 This is a Fan Lamp that Linda made while she was at home and it only proves that she knows what she's doing when it comes to crafting stained glass.  I only touched up the soldering here and there and then threw it in a Fan Lamp Base to take this picture. 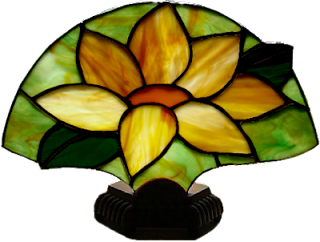 Betty made 2 projects while she was at home last week and then brought them in to be critiqued.  My final word is in and it is..."Excellent"!   This is her second cross made with bevels and it looks pretty flawless to me. 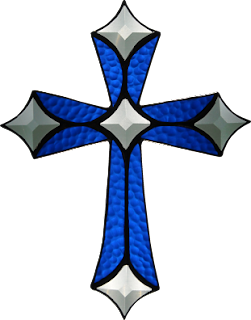 Betty's 2nd at home project was this butterfly which was made from the pattern that everyone makes when they start classes with us.  She wanted to make one completely on her own and did a great job doing it.  It looks to me like someone was paying attention during class. 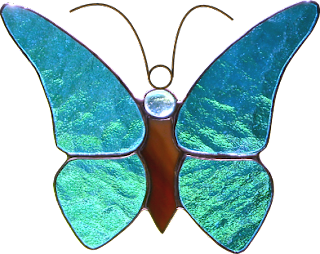 Next, as promised, we take a look at Brenda's second cross window.  These are both going to be gifts so I'm not entirely sure if we'll see this one completed or not.  There's a fair chance that Brenda will finish this at home and then wrap it up and give it away.  With the front completely soldered there isn't much left to do on this one!

Talk about flying through a window!  Donna came in with her Fleur De Lis bevel wrapped and that was it.  By the time she left class she had the background and first border cut, ground, wrapped and tacked together!  Not only that-- her final border is also cut and ground so almost everything but the soldering on this has been completed in one class.  Now that's progress! 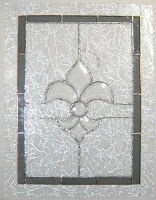 Tim, just like Donna, came in with his bevel wrapped and ready to be tacked together.  Once that was completed he managed to tie for the gold medal with Donna by accomplishing the same amount of work that he did.  I have to say that I'm always impressed with Tim (and Donna's) work both in quality and quantity.  Oh, and did I mention that they both made these windows without a pattern?  Beveled windows like this are constructed on-the-fly for perfect fits (and it shows). 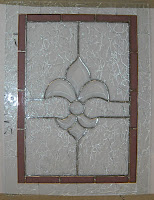 While Tim and Donna worked on Fleur De Lis', Jane worked on her Angel window.  She's decided to add a background and a border to this somewhat standard pattern (That Martha is also working on).  Her background is all cut and ground and she's got half of it wrapped so that the  border will be added next week followed by a final solder job. 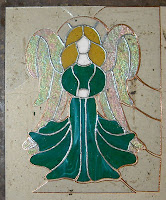 Ann's super-multi-piece Geometric Window will most likely be completely ground when she comes back in next week since she only has 9 pieces left to go!  Only one of these 9 pieces is currently cut but the other 8 are so small that they'll be done in the blink of an eye.  I'm expecting to see some of this wrapped in our next update and I, along with Ann, can't wait to see this completed.  The end is near and Ann may do some tiny adjustments involving the border but the lions share of the work is now completed on this magnificent window.

Linda has begun working on a Traditional Style Window and the red glass she picked for the flower in the center makes this as traditional as you can get.  The three accent pieces (the flower center and the 2 diamonds) will be done in an off yellow that will most likely match one of Linda's borders.  Although it's hard to see she also has her clear, textured background glass cut so this is another project that is moving right along.

And here's a look at Martha's Angel (the same as Jane's sans the background and border).   The iridescent granite backed glass that she chose for the wings really stands out nicely and now that the Angel is tacked together and just waiting to be soldered I can't imagine anything stopping this from being completed in Martha's next class.

Mary has started her first window with us and it's an Iris design.  After tracing out her pattern and deciding on glass colors she managed to also get all of the glass for her water cut.  There are still a lot of pieces left to go but the cuts aren't very difficult so I suspect that she'll work through this quickly.  And judging by what I've seen so far, Mary is doing wonderfully. 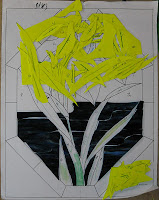 Myrt has begun wrapping her Pelican and she's already talking about return to work on her Hot Air Balloon Window as soon as this is completed.  And I don't think it will be that long before this window walks out the door for the last time. 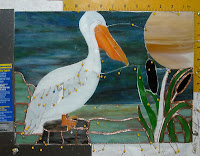 Terry worked on her two HLSU windows and they're both near completion.  One has the border attached and the brass channel in place and the other just needs the border wrapped and then tacked.  After that she'll solder them both and call these finished!

Bonnie got the cartoon (and I have no clue why it's called that) portion of her lamp cut out and then attached to her styrofoam lamp mold.  She did that by simply putting put some double sided tape on the mold, affixing the cartoon pieces and then covering it all with clear packing tape to protect it from the flux, wax, and heat when she solders it.   I've found that adding a layer of packing tape makes it easier to re-prep the mold when you decide to make the lamp again in the future.   Also, since this lamp has three repeated sections we only covered one third of the mold with the cartoon (you can see where it stops on the right side in the picture).  Bonnie will make the first 3rd, tack it, then slide it to either side and then add the second 3rd of the lamp.  Doing this three times makes the complete lamp and allows her to use the same mold for other lamp patterns. 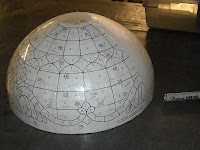 There was a lot to cover and now that it's done I have another post to make.  Our students never stop production here so I rarely get a rest when it comes to updating our Blog.  So until our next update comes out I hope all your glass cuts easily and your grinding is minimal. ;-)