Crack is a Dirty Word

Suddenly we have a surplus of Fleur De Lis Windows being made.  In fact, we have a lot of them completed this week!  What can I say-- they make the perfect gift here in Southern Louisiana where it's hard to walk 2 feet without seeing a Fleur De Lis.  But let's start this post by looking at something other than an FDL.

Two weeks ago we saw Linda's finished Victorian/Geometric Window and this week we're taking a look at Betty's variation of the same pattern.  She used completely different glass which really changed the tone of the overall window (although neither is right or wrong because colors are a personal preference and nothing more).  One thing that stands out as being identical between the two windows is the craftsmanship.  Betty's window is every bit as well made as Linda's-- and that's nothing to sneeze at. 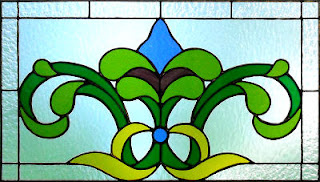 Myrt's completed her Pelican Window and it's, well, flawless!  She did a redesign on this by altering the right side of the window to include cattails and she also made some other adjustments throughout the remainder of the window.  She brought it into class completed save for 2 hooks and that was a simple addition.  After that I briefly touched up some of the soldering but basically just on the joints (spots where 2 or more lines meet).   In the end she has a window that she can certainly be proud of because I know I'm proud of her for making it! 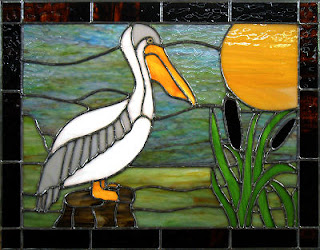 Ok, let's start our run of Fleur De Lis Windows.  We're going to start with Cindy's for no reason other than the fact that when I uploaded this weeks pictures Google decided to put this one first.  So, as you may recall, Cindy started this last week and left with the center FDL all ground and wrapped.  She picked a background glass and cut that at home so when she came in this week all she needed was a border and the back side soldered.  I must say that I was very impressed with how perfectly her diamonds line up.  Even her soldering required hardly any effort on my part to touch up.  What a great job! 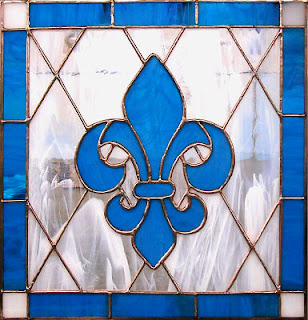 Next up we have Donna's FDL Window.  This is a slight variation on one that I happen to have in the shop.  The only difference aside from the colors are the straight lead lines that run out from both sides of the FDL to the first border.  I had added curves to my lines but seeing them both together I can't say that I have a preference to either one so I guess with this pattern Donna just couldn't lose! 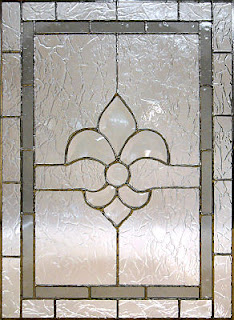 Next up, we have the same Window as done by Tim.  The only difference between the two of them is the color Tim picked for his inner border.  The background glass may look different between the pictures but that's just because of the way the light was reflecting on the window when the picture was taken. I'd be hard pressed to pick a favorite and I must say that the workmanship on both are beyond words. 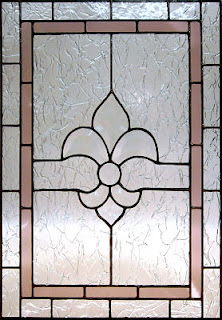 And this is yet another FDL that Tim completed this week with the biggest difference being the actual bevel cluster that he used as the center piece.  Fleur De Lis' come in many shapes and sizes and what your seeing here is a second variation of about 10 different FDL bevels that I know of.  Tim's been going to town lately with the number of projects he's been putting under his belt and with each one I see his confidence growing more and more. 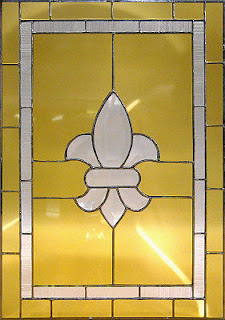 Our last finished project for the week was done by Terry and I have to point out that she had not one but two of these completed at the end of class.  They were 100% identical so I only took one picture  because the consistency between the two windows was something that I have to give Terry a lot credit for.  When people make a window they may make a mis-cut here and there that they simply adjust for in other places which make for slight variations between windows, but these two had not a single mis-cut so they were truly identical which is no small feet in glass. 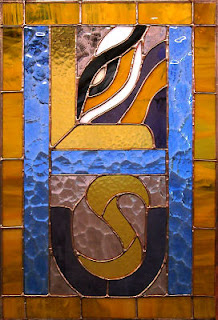 Of course, Terry didn't stop there either.  She resumed working on her Flower Bouquet Window and she's got a lot of this colorful project ground and ready for foil.  There are a few green leaves left to cut and some small background pieces but I'd say that Terry has the bulk of the work finished with only the odds and ends left go. 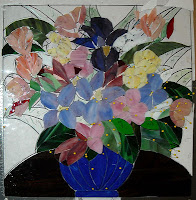 Betty also worked on this Angel during her class and it's so close to being completed that it isn't even funny.  All she really needs to do is attach the background glass to the Angel and then grind her 4 corners that change its shape from an oval to a rectangle.  After that it's just border work and that will go by too quickly to even mention!

Brenda's Fish window may have drove her a bit crazy last week but this week it's firmly under her control.  So much, in fact, that it's now completely ground and about 95% wrapped.  As you can see she got this fitting together perfectly and will undoubtably be soldering it next week.

Although it's hard to see in this picture, Mary's Iris window needs only a border cut for it and then it will be completed!  She wasn't sure what to think about the newfangled method we used to ensure that her sky's grain lines all flowed together but in the end I believe that she was very impressed with just how easy it was to do.  And the icing on the cake was when it took all of 5 minutes (less to be honest with you) to grind all of her sky and have it fit perfectly the first time!  Mary will have a nice easy class this coming week with only a border and some soldering left to go on this project. 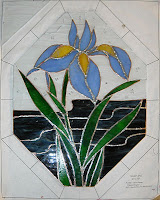 Mary Grace decided to go with a glue chip background for the circular section of her Hummingbird Window.  The circle had been cut but the actually individual pieces still needed to be 'hacked' out out the circle and Mary Grace was worried about how this would be accomplished  but by the end of class she had it all cut, ground, wrapped, and tacked.  She had previously told me that she wanted to use bevels for her outer border and that she had a few boxes of them at home so she bought them in and we've now figured out the new size for the inner section so the bevels will work.  I suspect that Mary Grace will be soldering this next week which means that she's only got 20 more cuts to make before all her glass cutting is completed on this window! 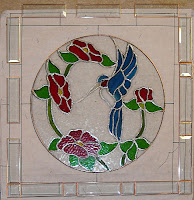 Susan is making our last Fleur De Lis project in this post and it's going to be a box rather than a window.  What you're seeing in the picture will be the top hinged lid of the box.  Once this is constructed and is 100% completed she'll use the measurements from the top to make the bottom sections that form the 'tray' of the box.  And once that's done she'll just hinge the top to the bottom and that will be it!  Expect the top section to easily be completed when she returns! 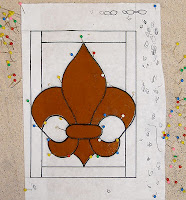 Here's something different:  Russ ordered some Uroboros glass that got shipped to us in two 15"x24" sections.  Everyone went wild over it but it's not the easiest piece of glass to place in a window.  Susan, though, had ideas of her own.  She took one of the pieces home and when she came back with it a week later she said, "Yes, I want this."    She's going to use it as a piece of art itself.  All she did was rough up the two long sides to make it match the irregularity of the top and bottom (they were perfectly straight cuts when the glass came to us) and then she drilled two holes in the upper left and right corners so she could hang this by 2 chains.  In the end this is what she took home and let me tell you that I've seen this done many times in my 35 years of making glass.  The texture on this piece of glass is so deep you can practically get lost in it! 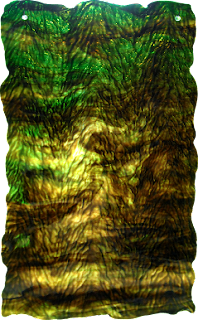 Finally, Bonnie's Lamp is going to be looking like this for a while.  There's just no progress that we can really show until the pieces are placed on the mold.  Until then all we get to see are patterns traced onto glass (as you can see on the pink sheet of glass) and pieces of cut and wrapped glass filling up the box that holds all of Bonnie's work.  But trust me, when it starts to come together everyone is going to be impressed.  And it isn't going to take very long for that to happen.

And that about wraps it up for this edition of our Blog.  I hope everyone had a great Memorial Day!