I'm Gonna Fly Like An Eagle, Into the Future

I find it hard to believe but my 'little' wrapping tutorial has turned out to be longer than I expected.  Rather than tack it onto the front of this update I think I'm going to re-post the first two parts as separate posts and then add the remaining installments as special edition versions so they can be searchable from this page.   So expect to see some slight re-posting throughout this week.

So let's start with my favorite window this week.  I just love this pattern (and I'm embarrassed to admit that I've never seen Beauty and the Beast, where it came from). Brenda's execution of it is flawless right down to the soldering.  I love the subtle differences in the glass that don't draw attention but end up adding so much to the overall design (two different reds in the rose, and the different textured blue in the circle section). 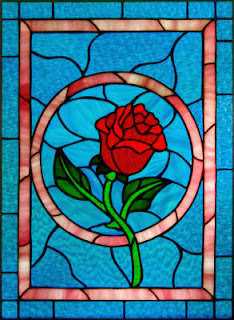 Brenda also completed her Ribbon Border Cross window and the combination of the granite backed red with a clear granite background is stunning.  Both of Brenda's window brought a smile to my face this week. 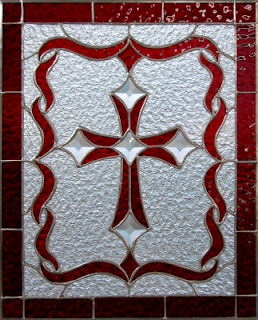 Linda F's Nativity Scene Window is now complete and looking great as well  She and Mary had refresher soldering lessons and as you can see they paid off in spades!  The most interesting thing about these next two windows is that they were both pretty much made from the same glass.  The borders are really the only difference between them yet they look anything but identical.  Why?  Well, Linda version is back lit while Mary's is front lit.  What a difference a little light behind a window makes, huh? 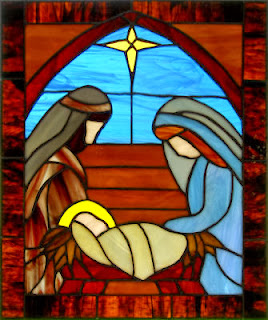 Here's Mary's version of the same Nativity window.  Only the borders were changed (to protect the innocent) but the overall feel is completely different.  And that's the magic of stained glass-- striking that perfect balance between what looks good with light behind it and what looks good with light in front of it.  In my opinion this window looks great both ways and that's what they (Mary and Linda) were striving for. 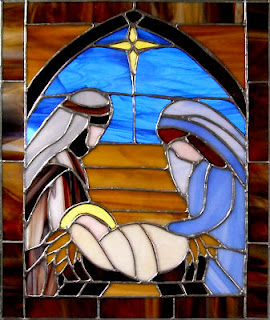 Terry completed her Beveled Cross Geometric window and although her cross isn't made out of bevels she managed to get make this version work by incorporating the border color into the cross along with 5 bevels.  The result is every bit as satisfying as the beveled versions, don't you think? 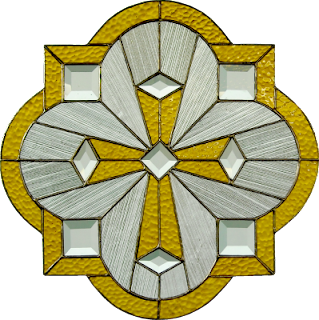 Cindy completed a Faerie as well as a 3D Flower and they both look better than anyone could hope for.   The flower has a center made of glass beads adding even more definition to the double 3D layer of overlapping petals. Very nice indeed. 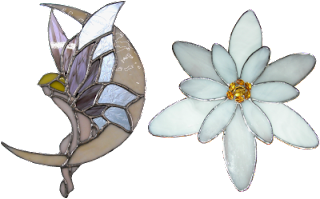 Meanwhile, Ann continued cutting and grinding her latest stained glass hand mirror and it's ready to be tacked and then soldered.  With only the mirror left to cut out I'd say that we'll see this as a completed project in our next post.

Beck got all of her Horse window wrapped while she was at home during the week and then she tacked it together here in class.  Once it was tacked we traced out a pattern for a double border which she then began to cut out.  Becky also brought a brand new grinder home with her so I'm thinking she's going to very busy with her glass work even when she's not in class with us. 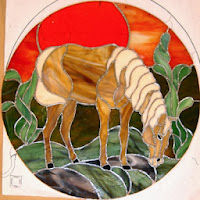 Brenda liked Terry's version of the Geometric Cross so much that she decided to make one for herself.  Brenda is using a clear light blue glass and is (as you can see from the picture) almost completely finished with the grinding part of this project.  I guess you can say she about to wrap this up soon. 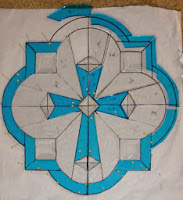 Cindy also worked on her Knotted Window which looks astounding.  The number one goal in a window like this is keeping everything symmetrical and Cindy made it look easy.  The clear glass that she used to form the interlocking knot has all been kept at a consistent width which means that everything about this is plumb perfect. 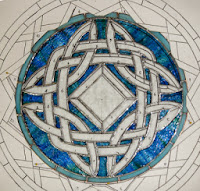 Janet had plowed through the cutting portion of her stained glass class and this week she started grinding all of her pieces.  She started in the lower left and is about halfway up her window now.  I can tell by looking at her work that she understands how the pieces truly fit together since her pieces are fitting wonderfully.  Grinding is a strange process because there are so many ways you can get things to fit together.  The trick is figuring out which way is the better way which Janet appears to be doing.  She'll be wrapping this next week for sure. 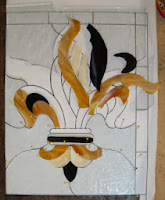 And Jeanne's LSU window is moving right along as well.  She had the strips for her double border all cut out and then she used the pistol grip cutter to cut those strips to the correct lengths.  With all of her glass cut she'll be set to solder this when she comes back in.

Susan's Abita Window is taking shape now that the glass cutting process has begun.  The fun part of this window is going to be right at the end when she solders 2 actual bottles into the window so that half is hanging out the back and the other half is coming out of the front.  Talk about 3D!

Mary Grace's Eagle window is almost completely cut out now.  She's decided that she wants to make the thin layer of water that runs along the bottom a little thicker than what the pattern showed.  That's an easy change that she'll accomplish once she has this ground and tacked together.   Sadly, Mary Grace is about to have some shoulder surgery so she's going to missing class for a little bit while she recovers.  But she's left her project here in class to make sure that makes her way back to us.  We wish her all the best!

Terry (as always) has two windows in the works this week.  One is a red version of the Geometric Cross and the second is a two toned green version that has been altered slightly through the use of color.  Using a colored background should make the clear cross stand out more than usual.  My only complaint is that I didn't turn the windows around so that they weren't lying on their sides in the picture.

Lastly we have Shelley's Beach Scene and it's just about completely cut out.  She's making 2 minor changes to the pattern to adjust for some glass that came out just a little too small to use as it was originally intended.  In the end, I like the changes and won't even mention where they are in the window.  If this manages to get foiled during the week it will certainly be tacked together when Shelley returns to class.

And that's it for this post.  I put this off until the last minute on Monday evening and then we had a power outage which delayed the posting of it one more day.  But it's still being posted before classes start this week so as far as I'm concerned we're on time since we haven't fallen behind.  Look for a few special edition blog posts in the weeks to come-- we have a lot to show you!