This week we're going to start with a very quick and simple, yet important, tip.  When laying out your pattern pieces onto a sheet of glass, position your largest pieces first and then use the smaller ones to fill in the areas between the large pieces.  It's a great way to save on the amount of glass you use.

Now, onto out students starting with Terry who completed her oval iris window which proved me correct once again-- it's stunning.  I've always loved this window and it's certainly good to see it be made again by someone who put such care into the work.  Terry's attention to the flow of the pattern always shows in her work.

Beck B has finished her Horse Window.  His name is Diamond and for an imaginary horse he's very well realized.  Becky came in twice this week to finish him and is very much looking forward to starting her next project.  Becky's back! 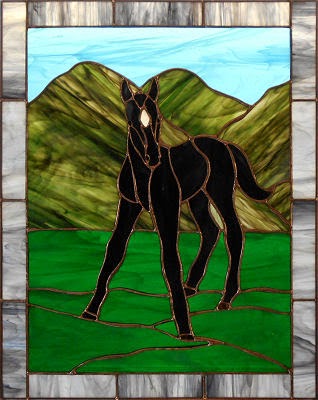 Rowena completed her Grapes and Butterfly window and said she loved working on the grapes in this project.  Grapes are always a pain because of the number of pieces and, of course, the size of them.  But these grapes looked huge compared to the last few clusters that Rowena made.   The good thing is that once you've ground enough circles you learn a few tricks of the trade that will apply no matter what size circle you're grinding.  Rowena has done her fair share of grapes and therefor knows more than a few tricks of the trade. 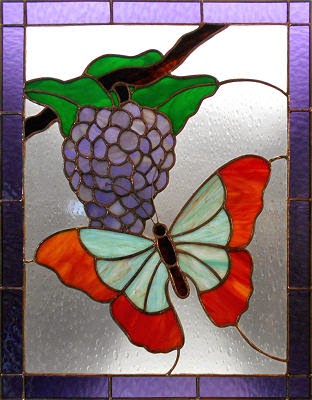 Myrt completed her Louisiana and Sherrif's Badge Window this week.  She only worked a little bit on this in class achieving all the toughest parts at home on her own.  And this is a window that I am proud to say has no soldering done by my at all--  Not a single touch-up was required.  Myrt gets the soldering award of the month. The Flowered Hand Mirror Pattern that our students make never fail to catch people's attention and Janet's latest renditions are among some of the best student work I've seen.  Just look at how beautifully everything curves and flows together.  These are a great example of Janet's truly stunning work. 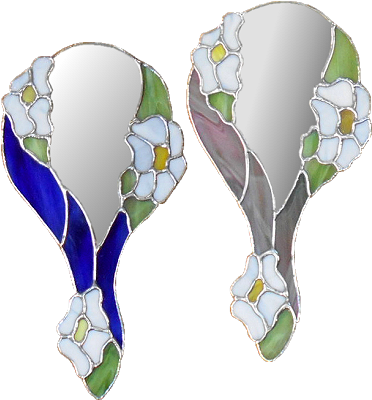 Jeanne managed to make it back to class this week after having her knee operated on.  She wrapped all the pieces for her two Fleur De Lis sun catchers  and then soldered them all together.  By the time class ended she walked out the door with her two sun catchers and her rolling crutch.  Her will to resume her stained glass work is as inspiring as her craftsmanship. 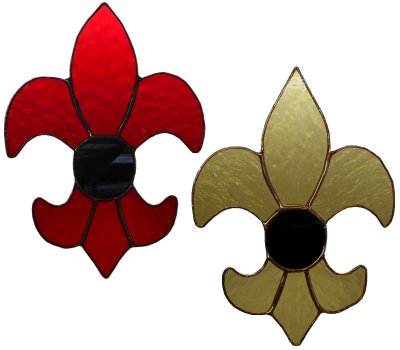 Beck S continued working on her Bamboo Window which I guess I now have to call a Bamboo and Panda Window since she added her little black and white friend in the bottom left.  He's the perfect size, not too big nor too small, so he doesn't interfere with the overall Bamboo theme.  Whenever you add an animal to a window you run the risk of losing the focus of the original design, but not in this case.   Becky's window is very much a Bamboo window first and foremost,

Betty  came in with 2 Single sunflowers under way and left with the front side of one window completely soldered and all the glass cut for her second window.

Cindy came in and started working on a circular 10" Geometric design sun catcher.  At first she was very unsure of just making 4 pattern pieces and repeating them, but I pushed her to do it and she found that things worked out perfectly well.  Look closely and you'll see that this design consists of just 4 different pieces repeated throughout. 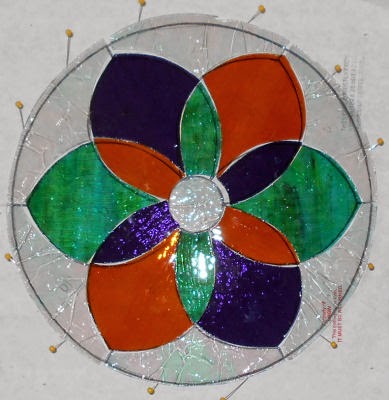 Bonnie got her dragon all cut out with varying shade of greens and blues.  She still needs a scrap or two of red and orange but she has that at home and will cut the from her scraps. 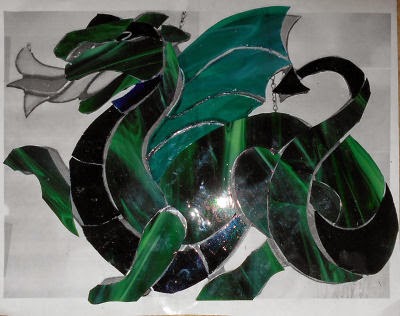 Paula came in with the center of her Bayou Scene Mirror completely soldered so we then worked on the task of dividing out a thin inner border and a slightly thicker final border.  One it was all mapped out  she cut out a paper pattern, picked two colors (which was rather simple to do if I do say so myself) and began cutting border.  The inner border is all cut out and the outer border is started so this mirror is very, very, very near completion. 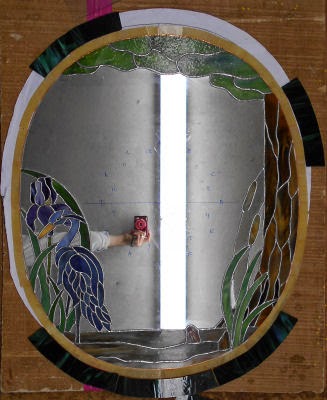 Jeannette  started cutting on her crab window and has made some excellent progress.  I can't help but think that the glass she's using is picture perfect.   She's just a eight legs shy of having a full crab and Jeannette's already got all the glass you see in the picture ground already. 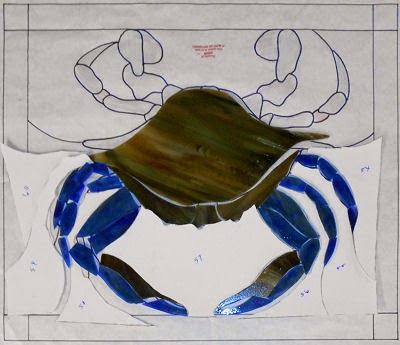 Then there's Linda F who soldered the first side of her Wild Thing window and then flipped it over to begin the second side.  After the soldering is finished she'll just need a bracelet, some eyebrow work and a breast augmentation before she gets to head out the door.  (I'm talking about the Wild Thing, not Linda!) 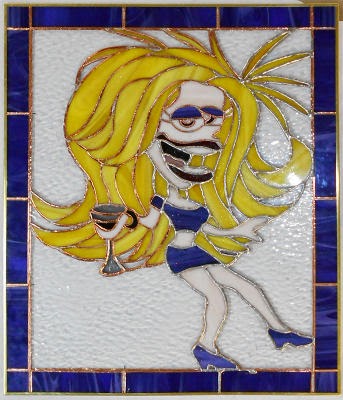 Susan's square and rectangle art piece is a ground and she's even begun wrapping her pieces.  Since she'll be leaving the solder silver she's wrapping the clear pieces with silver backed foil.  This should be an easy project to solder provided we don't apply too much solder.  Joints always accumulate more than their fair share of solder, so being a little stingy with the lead and remembering to drag the lead out and away from soldered joints before adding more lead will help give a more professional look to the window. 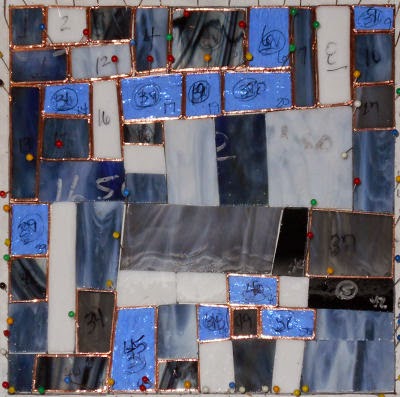 Carol resumed work on her 3106 window which is almost ready for its back side to be soldered.  She found a nice  red/orange piece of glass in the rack that we all agreed worked perfectly with the colors she'd already cut.  Once it was cut in strips and then broken down to individual pieces Carol quickly skimmed them on the grinder and began wrapping them in copper foil.  She'll get some channel next week and we'll probably hang it up for its picture when she returns.  Her mailman is going to love her!

Shelley resumed working on this Mermaid window that she started almost a year ago.  She had a jumble of glass cut out and wasn't entirely sure as to what was cut out already and what needed to be cut out so she simply began grinding from the lower left and worked outward from there.  Once that was done she started wrapping what she ground so she can tack it together and then cut out the remaining missing pieces .  This is completely under control now.  Just wait until this is done and has all its bling attached to it.

Martha now has all of her Hummingbird/Fuchsia window cutout and it's all ground save for the  final border. Martha's speed at making windows is increasing at a steady rate.  I think it's all about her comfort level with the glass-- the more comfortable you are with each step, the quicker you go.  Martha's obviously very comfortable now. 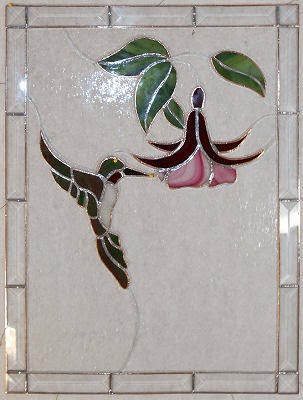 And Sue began cutting her feather design window and has all of her amber glass cut for both sides of her 65" long window.  This is a nice flowing pattern that will  help show susan the importance of soft curves while cutting and (especially) grinding.  Something Sue learned was to cut the inside curve first and the outside curve last.  This allows more glass behind the tougher cut and helps minimize  breakage.

And in the end we take a look  at Brenda's work this week.  She got the second of her two small panels all cut out. The first is ready for solder and the second one just needs it's border attached before it's in the same position. With only a little solder needed to complete these I think it's a fair assumption that they will be hanging up shortly.  Brenda also got the red background to her newest CC window cut out. She's certainly been a busy little student!

A new round of classes are about to begin for us Tuesday evening so I'll be off to bed early tonight to prepare for a busy week of progress followed by a Weekend Workshop which will be all about Glass Fusing!   And, as always, we'll cover that Fusing Workshop in a special Blog post. 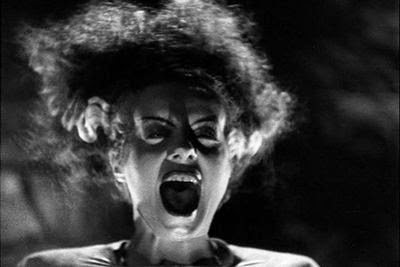