No Problems, Only Solutions


Something that most people (and our students) don't realize is that a beveled border must be planned before your window is even drawn up as a pattern.  Bevels come in set sizes based in length by even inches and by widths in assorted half inch increments.  You can cut them but then you lose one side of the bevel and you'd also have glass that's much thicker than anything else in your window which can lead to problems.  If you think you want a bevel border you must plan out the border first and then fill in the center with the design for the rest of your window.  Unless your window is an even inch measurement in both height and width, bevels just won't work.

Well now, Linda F completed her Wild Thing Window and it's everything I thought it would be. It's quite the character and nothing short of vibrant. I know for a fact that we'll be seeing this again in the extremely, very soon, future. (Like before this post ends!)  I really love this window. 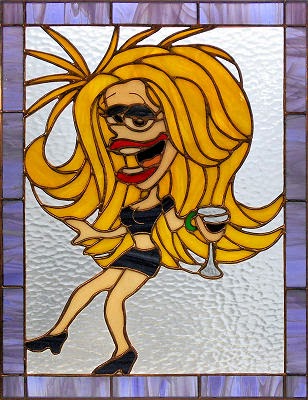 Then we have Carol's House Numbers Window (otherwise known as project #3106).  Once she hangs these the UPS man won't have any excuse for not being able to find her house!  Carol has certainly come a long way. 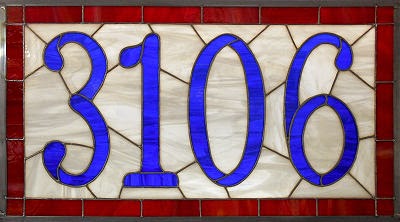 Not to be satisfies with her House Numbers, Carol also wrapped her 3D rose pieces while she was at home and brought it back in this week to see how to assemble it.  I think she might have been shocked at how unplanned it all went together-- you just tack the pieces any which way you please.   Once the first 3 pieces are tacked together the rest is a piece of cake.  The beauty of these is that no two are ever the same (and you couldn't make a matching pair  even if you wanted too-- there are too many random variables that come into play while assembling these.)  But I think the end result is gorgeous. 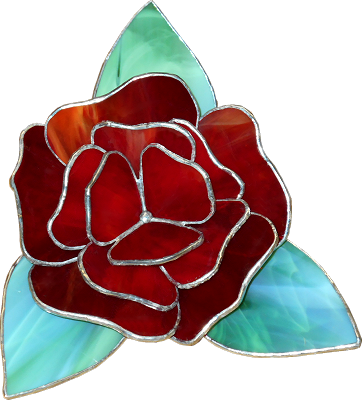 Cindy completed her circular geometric suncatcher.  She gets special credit for making it a nice perfect circle which is something so many people forgo and then wonder why other people don't compliment it.  It's hard to make a perfect circle but most people can tell when a circle is off.  It's like a clock with the 12 not perfectly aligned at the top.  Some people won't notice it, but most will.  And this is perfect. 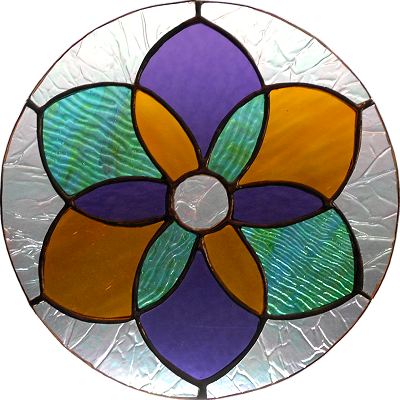 Martha completed her Humming Bird and Fuchsia window in record time. I'm officially stating for the record that Martha's speed issues are officially out the door.  And the work on this (yes, even the soldering) was just shy of perfection.  A great job all around. 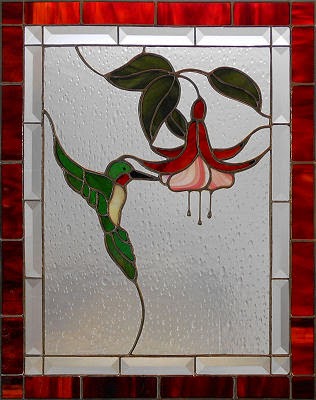 And I almost hate to say it but Carol also made this LSU window during the week.  I added hooks to it and that was all that was needed to be done before Carol washed it and took it home.  It looks to me like Carol is now officially making windows on her own-- and great looking windows at that.

Here's a look at the first of Betty's single sunflower windows.  This one has a root beer border and will go in her closet for when she needs a gift.  Betty's always planning ahead and next week she'll have another gift ready as well. 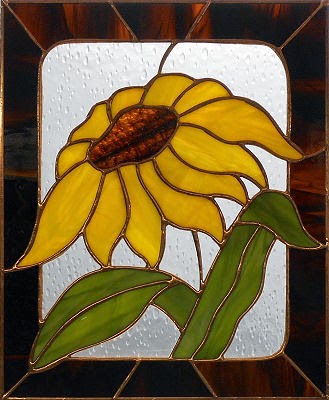 Brenda has another CC  window under her belt along with another section of her Transom Window completed.  She's another student who is flying through projects almost quicker than I can take pictures of them. 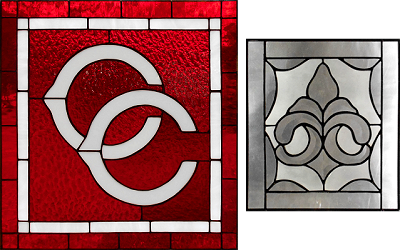 And Jeannette completed her first 3D Sunflower Lawn Ornament and it's perfect.  Sunflowers certainly seem to be the rage here in the shop, don't they?  At this rate I many need to make a separate drawer for sunflower patterns. 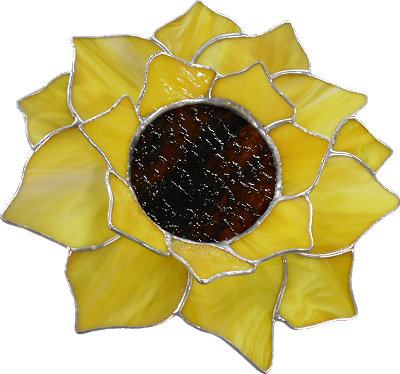 Speaking of Lawn Ornaments, Rowena completed another Butterfly, this one in orange and yellow.  She said she wanted more yellow in this but she didn't have any more orange glass.  All I know is that it looks great. 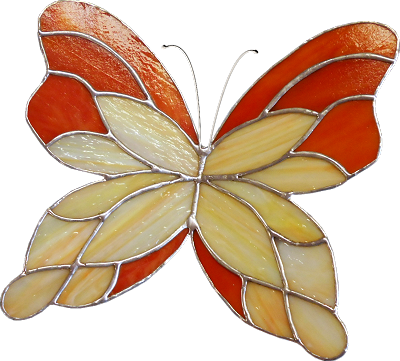 This week also sees that Becky S's Bamboo and Panda Window is very close to being complete.  She only has 3 pieces left to grind and one has some really deep curves cut into it so she's going to wrap what she has ground and then tack eveything so it's nice and solid to make grinding the remaining pieces easier.

Cindy not only completed a project this week but also managed to work on two others as well. She got a Hand Mirror repaired that she had made long ago and then she got a fairy on the moon  completely cut and ground.  The hand mirror was a total rebuild--The only things left from the original mirror are the three flowers, but it's back together and looking good again. 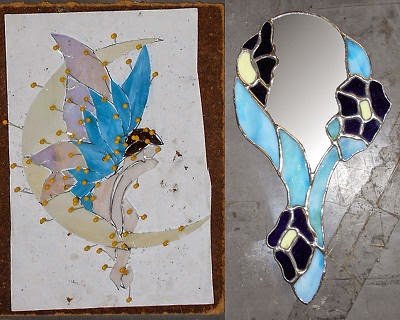 Ann started this window last week but I never got a picture of it.  I'm thrilled with the amount of cutting she's achieved in just two classes because there are flowers everywhere in this nearly 3 foot by 3 foot window.  The pattern may seem familiar to longtime readers because Ann made this window once before and is making this second one to go in the same room but in the opposite window. 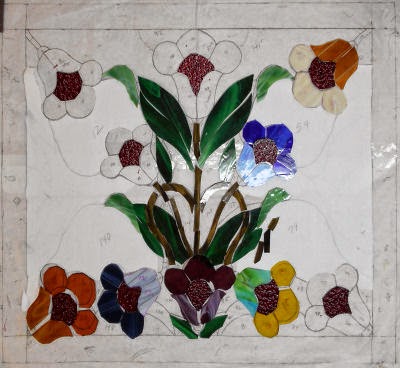 Next we look at Bonnie's Dragon which is officially ground and ready for wrapping.  The subtle color shifts in the three colors she used are hard to see when the dragon isn't backlit but they will be very apparent when this is off the table and in a window.

Janet's Melon Window is WELL underway.  She's worried about the amount  of green in it but I know that it won't be a problem at all.  This will be made the exact same size as her Peaches and Dragonfly window and reside in the kitchen almost along side the first one.  Matching motif's are a great way to get windows to collaborate without overdoing it. 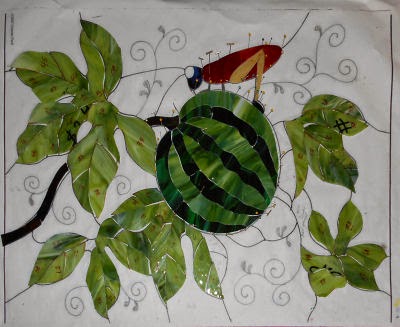 Jeannette's Crab window looks spectacular and it's not just the workmanship- it's the glass choice as well.  She's even got Carol thinking that perhaps she wants to make this crab as well.  Before you know it all of our students will have crabs (in their windows). 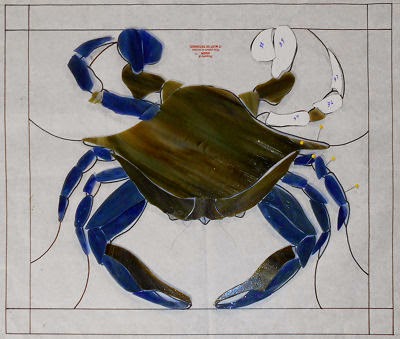 And Gale will easily finish her Heron Window when she returns and will even be able to start her next project which will be a Fleur De Lis window.  The only thing left to do is wash and wax this window.  I was particularly impressed with her soldering.  I know that Gale is a bit unsure about it but the finer points will come to her the more she solders.  I can't wait to see her face when she see's this hanging next week. 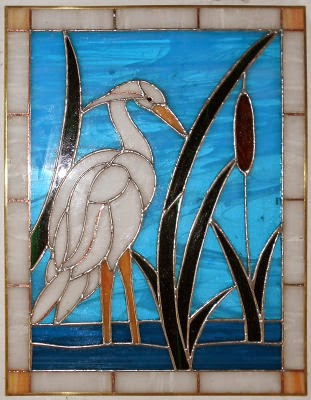 Jeanne began working on her Winnie The Pooh window this week.  Pooh is cut out and she's working on her tree trunk and branches now.  Pooh's face will be painted on before Jeanne starts soldering.   I think she is going to have fun making this window. 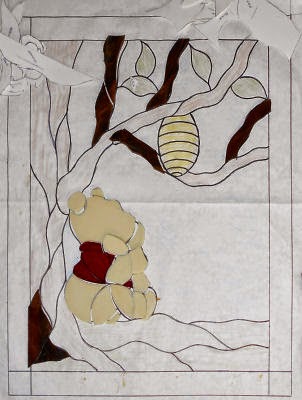 Rowena started her Kyle/Baseball window which I think is going to be a real show stopper.  The design turned out much better than I'd ever hoped it would.  The bat is a bit longer than the glass we have for it so we're going to make a little creative addition to make it possible.  We'll reveal that when we return next week. 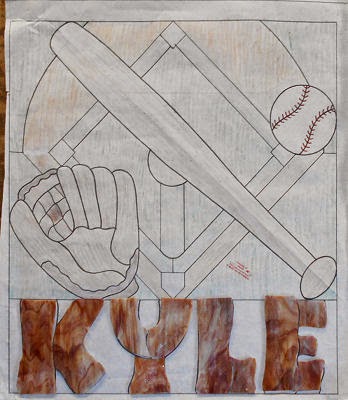 Linda_L has started her version of the Wild Things Window complete with a title.  This week I found out that Linda L's husband is the actual artist behind this logo which means this window will be even more special.  I have no problem converting something to be made in stained glass, but coming up with this design on my own would be impossible to me.  All I can say is that Linda's husband does some very nice work.

Terry came in with a patterns all drawn out and just wanted me to look at it before she began cutting glass. I made just one SLIGHT adjustment to make the cutting easier and then Terry proceeded to almost complete the window during class!  She's got it all cut, ground, and ready to be wrapped already.   Sadly, Terry says she's getting tired of doing letters and I can completely understand that.  Sometimes you need to make what YOU want to make rather than what other people want you to make. 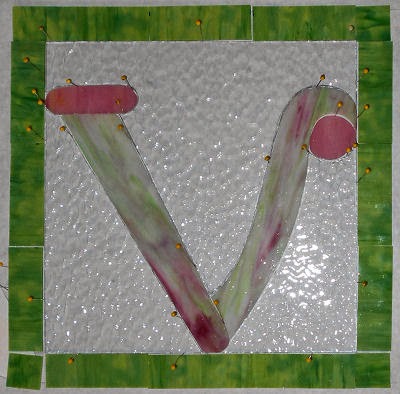 Once Linda F completed her Wild Thing Window she resumed working on her own single Sunflower Window, leaving class with just the border left to grind.  She came up with this pattern on her own and isn't taking near as much credit for that as she should.  Many people are afraid to even add a lead to a drawing for fear of 'screwing it up'.   Linda did a brilliant job converting the double Sunflower Pattern to a Single Sunflower! 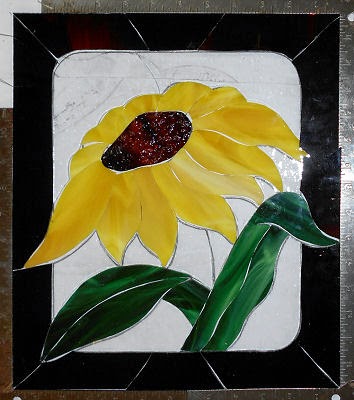 Sue now has all of the feathers for one side of her transom-type window ground and has taken them home to wrap.  She's thinking about adding a beveled border to this which will increase its height and width, but the window wasn't a perfect fir to begin with.  She's going to make some measurements at home and let us know when she comes back in next week..

And Mary Grace put her own spin on this fairly standard Double Sunflower Window by making the background blue (instead of clear) and then adding a double border.  It's a nice cheery version of a very popular design.  The thick yellow is not something that I'd normally do but I have to admit that it certainly works here.  Sometimes you just have to break those unspoken rules.

Betty is hard at work making this  completely clear fleur de lis window.  All the clear glasses have different textures and are hard to see here while the glass is resting on top of white pattern paper, but when this window is hanging it is going to look extremely elegant.

And to wrap things up  we'll take a look at the test 3D Rose that I made while trying to figure out the correct sizes for each piece.  Jane has started working on a 3d Rose of her own but I didn't get a picture of the glass that she cut out while she was in class.  The pattern was originally drawn for her so she paid close attention to the assembly process when Carol put hers together this week.  Next week we'll see Janes done in a slightly different red glass. 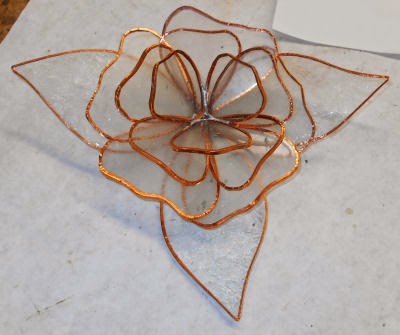 It's official-- We had our first Fusing Workshop this past weekend and we have a TON of pictures to share.  That will be coming up soon enough but we have a lot to sort through since there were 12 completed projects made in two long days!  That's a lot to sum up but we'll do it as quickly as we can.  Hopefully that will occur before or next regular blog update.  See you then.

Posted by Bayou Salé GlassWorks at 1:08 AM