We're interrupting our regularly scheduled Tip of the Week to bring you a repost on how you should properly lift your windows when they are resting flat on a table.  There are certain do's and don'ts when it comes to handling you windows and this week we're going to go over the basics quickly.  Just remember that the worst thing you can do is place you hands on opposite sides of your window and lift.  This allows your window to bow in the center and very easily break.

This picture shows the two worst ways you can lift a window.  You hands should NEVER be on opposite sides of the window. 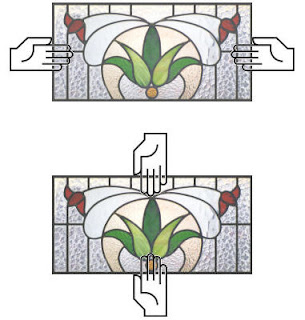 You should always grasp your window with both hands on the longest side and then lift upward leaving the side opposite your hands on the table so the window hinges upward.  The movement is the same as opening a hinged box. Glass is flexible and very easily broken if it bows so we want to support it as much as possible. 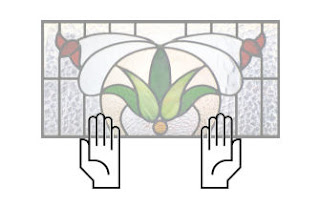 Once the window is standing as it would if it were hanging you can then transport the window from the top edge, holding the window vertically (as if it were hanging).  To set the window back onto a table simply reverse the process by placing one of the long sides of the window onto the table and then pivoting in downwards while keeping both hands on the opposite side (as you would close a hinged box).  Whether you pivot it towards you or away from you is your decision.

The most important thing to remember is to keep both of your hands on one side of your window.   Never carry your window as though it were a serving tray-- it should always be transported in its vertical hanging position.  Knowing these simple steps will prevent you from having to make repairs on your finished work.  Trust me!


So with that out of the way we'll start things off by looking at Terry's completed  Daylily Window.  As always, her use of color is stunning.  She liked the oval border from a previous window she'd made and came up with her own flower for the center of it.  Then she pulled out the red used in the flower by using a similar red for the corner pieces that rectangle this out.  Beautiful work.

And this week saw Martha busy with two windows of her own.  Her Magnolia design is perfect in all aspects including the fact that her window is a true circle.  When you decide to make a window in an oval or a circle you MUST stay within the lines of your pattern or the mis-shape of your window will painfully obvious.  Squares and rectangles are difficult to spot discrepancies in but very few people can't tell when something isn't quite round. 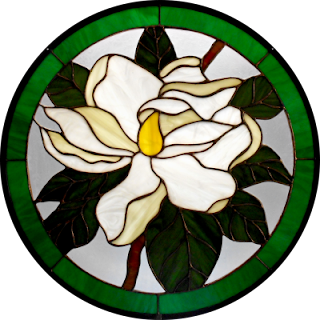 And here's Martha's second completed window- her Cardinal.  It's a simple but very nice design complete with an inner beveled border to give it a little something extra.  Matching the final border to the flower centers was pure genius. 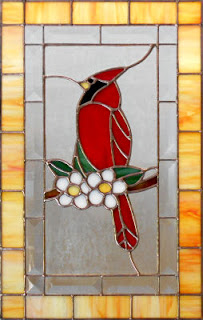 Cindy certainly didn't disappoint this week either.  Not one, not two, but THREE completed hand mirrors.  Beautifully executed with colors that contrast in just the right ways.  Amazing! 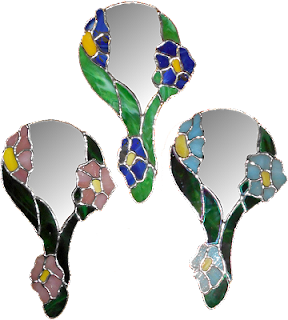 Sue's first Sunflower Lawn Ornament was a learning experience for her but it was something that she picked up on right away. Once you see one of these put together once it's very easy to do over and over again.  And like anything else,  the more times you do it the more confident you get. But confidence doesn't seem to be a problem for Sue as you can see in her Sunflower. 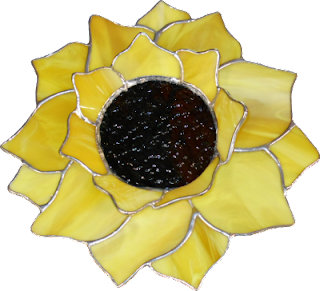 Linda's put the finishing touches on her second Rainbow Iris.  It's such a simple design but the colors really bring it all together.  I think she's got this design down now! 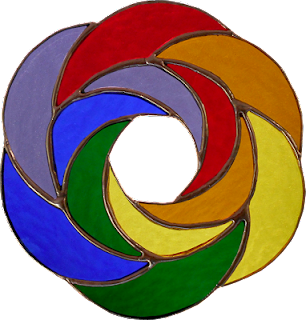 Here's Betty's first of three Sunflower windows.  Since she's worked on them all at the same time it's all come down to just the soldering now.  I suspect she'll have the other two completed when she comes back in and then we'll see what's next on Betty's list of things to do. 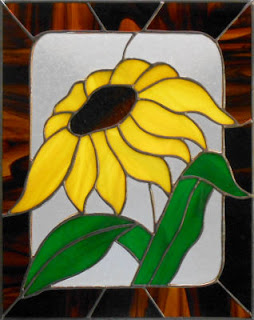 Becky S is doing something a little different with her Octagon Iris Window by making the background two toned.  She has a darker, water section underneath the flowers and above that she'll have clear skies.  Her bottom section is already cut and ground so she'll be moving onto the top half when she returns. 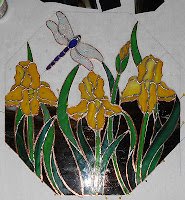 Brenda's Rose and Ribbon Window is being wrapped as I write this.  Brenda has taken this home and very well may have solder on it when she returns to class Tuesday.  This is one of Brenda's show stopping windows because students in other classes are all talking about this one.  Some were even disappointed that they couldn't find it hiding under the table with the other unfinished projects. 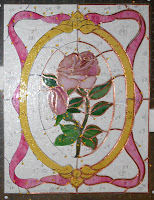 Bonnie also has two irons in the fire as she works on two different patterns.  She has the center of her  clear window ready for tacking and her cross is just about ready for solder.  In fact, I'll be honest and say that I've already seen this completed as she brought it by the shop Sunday.  We'll post a picture of it next week.

Myrt has all of the glass cut for her Outhouse Window!  She was going to go with a red final border but in the end it was just too much.  After much consideration she chose green and it's a perfect fit.  Even with two thins borders the double effect makes the window look so much better than a single border would.

So next up we're looking at the back side of Carol's Teddy Bear Window and it's so close to being completed that it almost hurts to say that it isn't.  There's only a little soldering left to go and then she'll add hooks, wash it, and move onto her next project which will be..... (insert drum roll here)............a Magnolia Lamp!  I know Carol can handle it and I can't wait to see her start it. 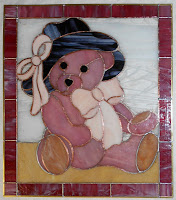 Linda F began working on this Horizontal Sunflower Window and it's looking great to me.  I like the fact that it's been changed up a bit-- you can only make the same window so many times before you get familiar with them and the challenge is gone.   Sometimes all it takes is a little change to make things become 'fresh' again.

Speaking of changes, Charlie changed all of the yellow accent pieces in his Hall Tree Inserts for amber.  It's a more subtle color and I have to say that when I compare the two colors I think that this is the better choice.  And the really impressive part is the fact that Charlie managed to re-cut and grind all of those pieces in just one class.  Now that's called progress!

Jeannette began working on this Pelican Window and it's moving right along.  She's become a student who grinds as she cuts so this is even further along than you might think because all of the glass you see in the picture has been ground and is already fitting together perfectly. 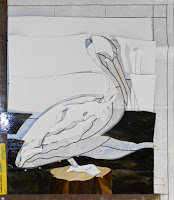 Cindy's also started another of her circular Fleur De Lis Suncatchers.  She's using some of the same glass she used in her last window and I call that a good use of glass.  Waste not want not! 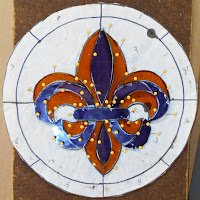 Becky B is ready for her final border.  She's taken a few of her inner pieces home to wrap but there's no doubt whatsoever that she'll begin soldering this when she comes back in. The double border really completes this window and if you can't tell  now you certainly will when this is completed and I do a side by side comparison. 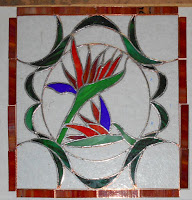 Gale had taken a Bee Lawn Ornament pattern home with her and when she came into class she had a pair of bees ready to be tacked together.  I showed her how to angle all the pieces on the first one and she assembled the second one on her own as I watched.  And what a great job she did.  There's just a little bit of soldering left to go on this pair of bees which she'll easily accomplish next class.  The picture above the red line is a side view of the bees so you can see just how much the body and wings curve on these. 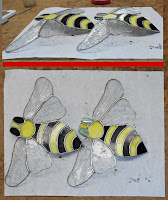 Then we have Jane's Flower Bouquet Window which is almost completed.  She would have worked on the center ribbon but forgot the glass for that on her work table at home.  But that didn't slow Jane down at all because she just made sure everything else was ground and then worked on cutting out the border.  This window is much bigger than you might think-- It stands almost 3 foot tall.  Russ is coming up with a way to add a curved channel to the edge of this window and we'll  see what happens with that when Jane returns in two weeks.

Janet took the remaining glass from her Transom Windows and came up with a quick design for the side transoms.  She really wanted to use the exact same glass and with just a tweak of a line here and there we were able to get both panels cut out using almost all of the scrap that Janet had left over from her Fleur De Lis Transoms.   It even looks like an old window!

Next we take a look at the back side of Jeanne's latest Beveled Fleur De Lis Window. She's got the front side completely soldered and looking good which means that with only a few touch ups on the back side left to go, this window will be out of here before you know it. 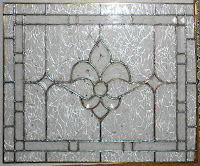 Here's your next to last look at Betty's final two Single Sunflower Windows.  One of them got cropped out of the picture a bit, but you can still tell what it is.  With the soldering just about completed on the one on the left I'd say that it's a safe bet to say that we'll see this pair hanging up when Betty comes back. 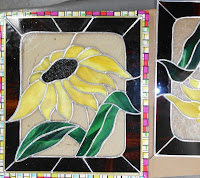 It was a birthday week in the shop and I'd like to thank all of our students who brought in Cakes and Chocolates to help us celebrate.  There were 2 Birthdays on Tuesday night as I turned 45 and someone else turned 76!  (Just remember that you can't believe everything you see and read on the internet!) 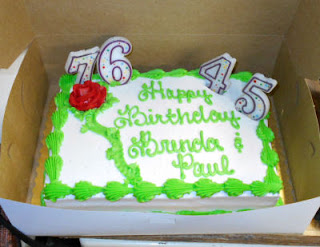