Wrapping It All Up

So Brenda completed her Bordered Rose Window this week and all I can say is that it's a good thing that a picture is worth a thousand words because all I can come up with is the word, WOW!   I think this window very much speaks for itself. 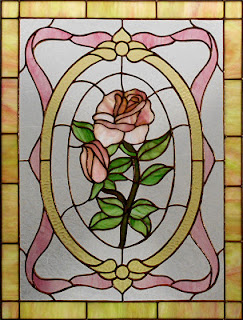 Becky S  has completed her Octagon Iris Window and the double border (as always) really makes it special.  It's a great design and I like how she made both small and large changes throughout to make it  a different variation rather than a copy of a previously made window.  I like when someone takes a pattern that's already been done and makes it their own. 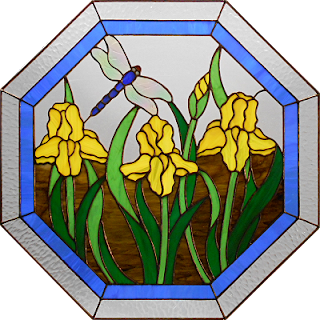 Betty finished two more Sunflower Windows this week.  She says that they make wonderful gifts but I think she gives gifts that are far more elaborate than they need to be.  She needs to learn the joys of gifting with suncatchers or nightlights! 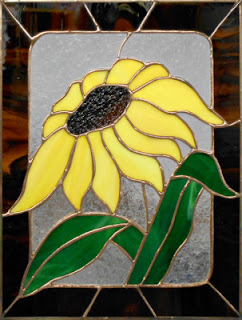 Cindy has wrapped all up the work on her  Circular Fleur De Lis.  I'm surprised no one has made this FDL in a larger version because all of those cuts allow for some nice color possibilities. (As evident in the picture below.) 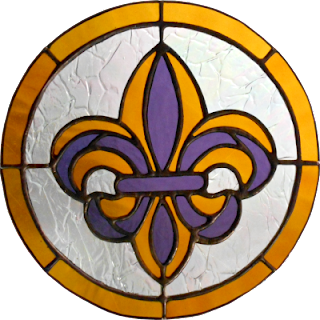 Cindy also has her Kaleidoscope Suncatcher  all cut out  and is currently wrapping it.  She's made a few tweaks to it from the original design which I think make it better and even more stable.  I like her use of glass globs which add some added depth to the window. 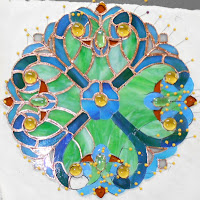 Becky B has all of her glass cut and is currently wrapping the last (thicker) border on her Bird of Paradise Window.  Soldering is just one class away on this project. 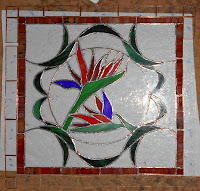 Charlie  now has two down and only one left to go with his Hall Tree Inserts.  These two will be colored next week and I'm fairly sure his last one will be all cut out by then.

Ann's Flower Bouquet is completely cut ground, wrapped and tacked together.  She got her border attached and the zinc channel is in place which means that it's a nice relaxing soldering job from here on out. 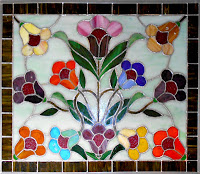 Myrt is officially ready for solder on her  Outhouse Window.  She's done a few other projects in between while she was making this but with the majority of the heavy work done on this window I'm sure we'll see a new project on Myrt's spot on the work table soon.  And be sure to keep your eyes peeled for a completed picture of this window shortly.

Jeannette is officially ready for the border on her Pelican Window.  There was a slight issue with a crooked line that we easily fixed by adjusting the other pieces around it.  The difference no longer shows and the only reason anyone knows about the change is because I decided to talk about it.   It's all a balancing act in stained glass.  You just need to decide what the most important aspects of your window are and then focus on those areas are first.

Gale has a lot of the clear round back ground glass cut and ground for her Humming Bird Window.  Once the flowers are cut and fitted into place Gale will add corner pieces to make it a rectangle and them start adding all of the fancy borders that really makes this window shine.  And she'll do that one section at a time. 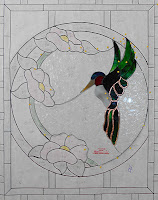 Linda F is ready for a border on her Horizontal Sunflowers Window.  She  wasn't sure what came first, the border or the tacking, but she  knows now.  The only way to ensure a good fit with a border is to solidify the inside of the window first and add the border on afterwards.

Brenda, with great trepidation, has begun work on a Tiger De Lis Panel. All I can say is that this will be easy compared to the other windows that she's made in the past (especially her Rose Window which we looked at in the beginning of this update.) 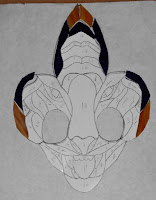 Terry has all of her Tiger/Cross Window all cut and ready for wrapping.  Now that it's together you can see exactly what the effect is that she was going for.  It all fits perfectly and Terry now has another skill under her belt-- pattern merging! 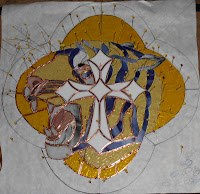 Rowena is working on a window with six panes featuring flowing leaves.  The panes will all be separate but connect visually by the leaves that flow between and throughout them.  Rowena learned how to use the pistol grip to get her lines all straight and will fit the leaves into each pane AFTER each panel is ground without the leaf.  We'll explain how and why in the weeks to come.

Linda L has all of her bevels wrapped for her pair of Transom Windows. The center piece is doubled up (one bevel cluster atop the other) and resting on a piece of bright white paper which is giving it a slightly blue tint in the picture when compared to the other outer bevels. Sadly, we don't think her background glass will be here in time for her next class so Linda may be starting a lawn ornament when she comes back in.

Natalie got all of her background cut out and ground and even added some bubbles for good measure.  That's when she ran into a slight problem with the border.  Sometimes you just can't find the right color and that's what happened here. We tried a lot of glass and even though the red looked good everyone agreed that it was a little too overpowering.  In the end Natalie did the safest thing and made a thin border out of the red which will be followed by a wider clear waterglass border.  It's a great trick to remember if you can't decide on a border color. 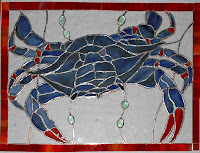 Shelley's  Underwater Scene is looking fabulous!  With her background cut it looks like she's almost ready to grind this project but there's still a lot to be done before that happens.  Although the fish and the leaves look complete they haven't been cut yet-- what you're seeing is the colored pattern through the openings in her background.  But Shelley is moving along at a great pace here and her cutting is getting better and better with each project she tackles.

Which brings us to our two Susan's who are both working on Lawn Ornaments.   Susan D has her  pumpkin almost ready to solder.  It's tacked together but I believe she said that she needed to cut out a second leaf for it.  No matter-- that will take just a few minutes and then this Pumpkin will be ready to be staked in her yard! 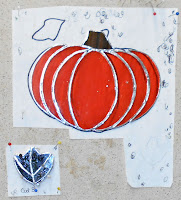 And Sue's Bee Lawn ornament just needs a little more soldering done before it's a completed project.  I'm going to go out on a limb and say that nothing will prevent this from BEEing completed next week.

And that's all the news that's fit to print.